Accessibility links
Scientists And Surgeons Team Up To Create Virtual Human Brain Cells : Shots - Health News By rushing live brain cells from the operating room to the lab, scientists have been able to create three-dimensional reconstructions of cells that reveal their electrical behavior and shape. 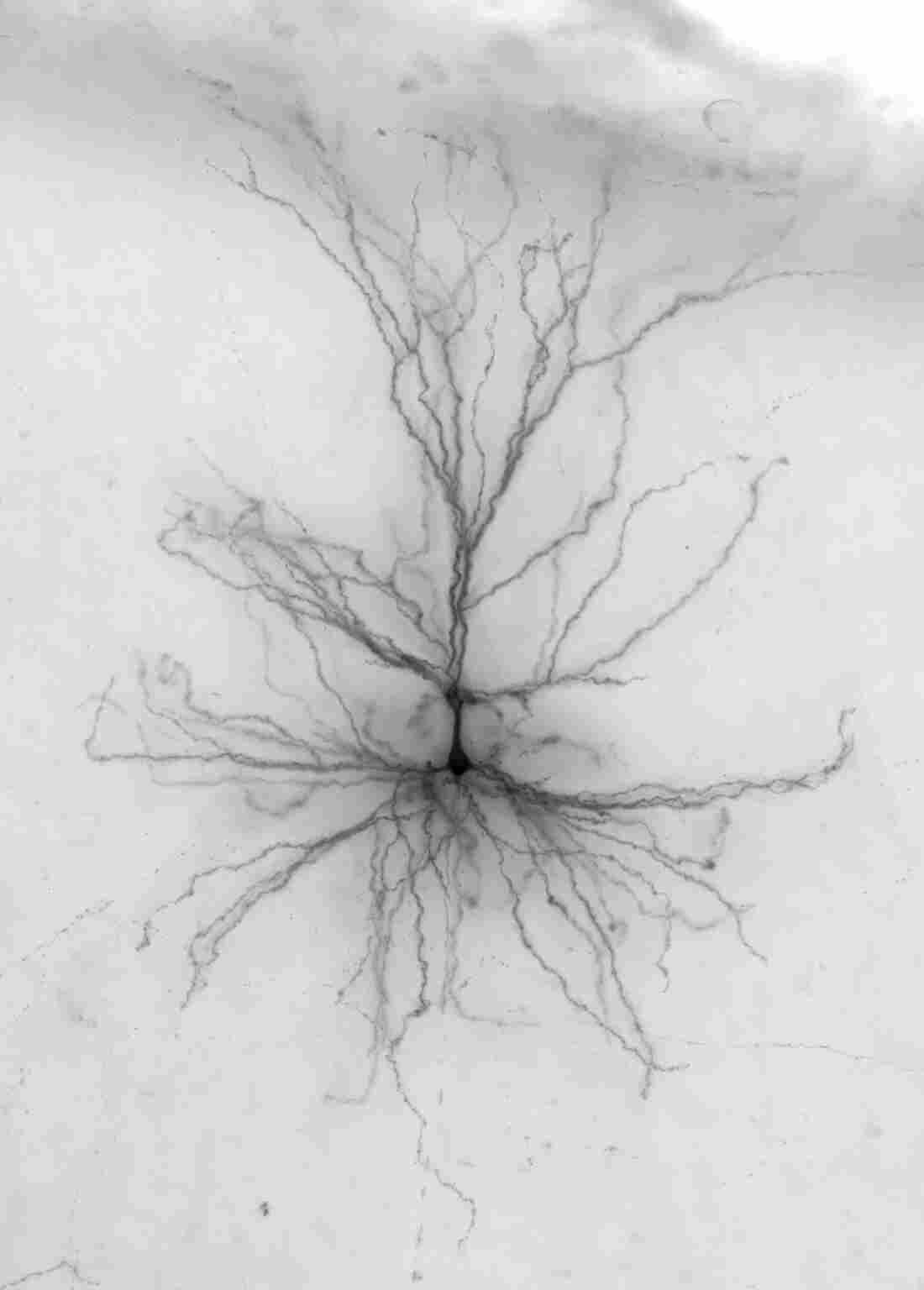 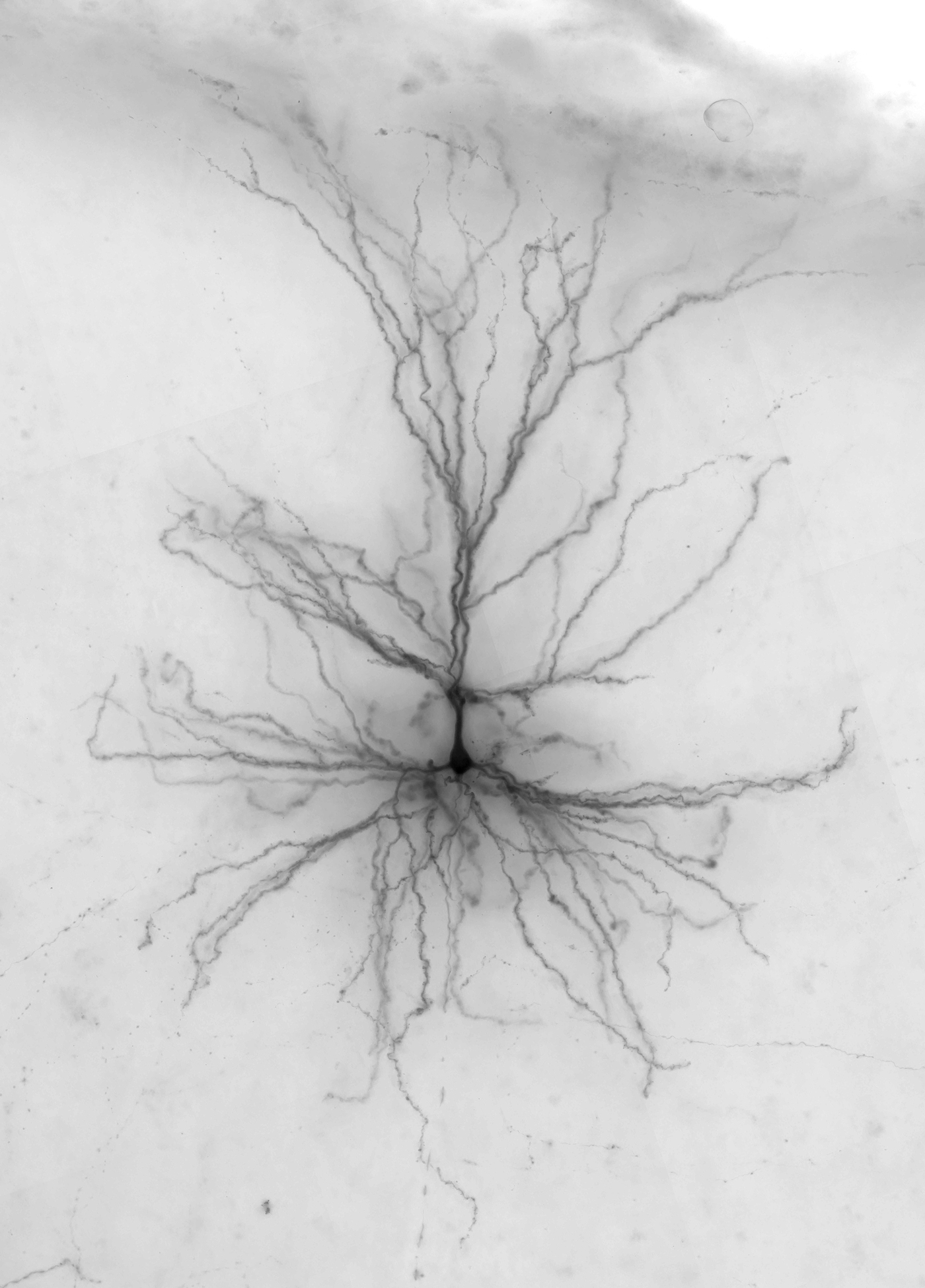 Researchers injected dye into this human neuron to reveal its shape.

Scientists in Seattle have created three-dimensional computer reconstructions of living human brain cells by studying tissue that is usually discarded during surgery.

The virtual cells, unveiled Wednesday by The Allen Institute for Brain Science, capture not only the shape and anatomy of living cells, but also the electrical signals they produce.

Until now, scientists have had to rely primarily on animals to study the electrical behavior of living brain cells, says Christof Koch, chief scientist and president of the institute.

"But in order to understand what makes us who we are, we really need to study the human brain," Koch says. The virtual cells should also make it easier to understand how brain diseases from Alzheimer's disease to schizophrenia can affect the behavior of brain cells, he says.

The computer reconstructions are the result of collaboration between Allen Institute scientists and neurosurgeons in the Seattle area. 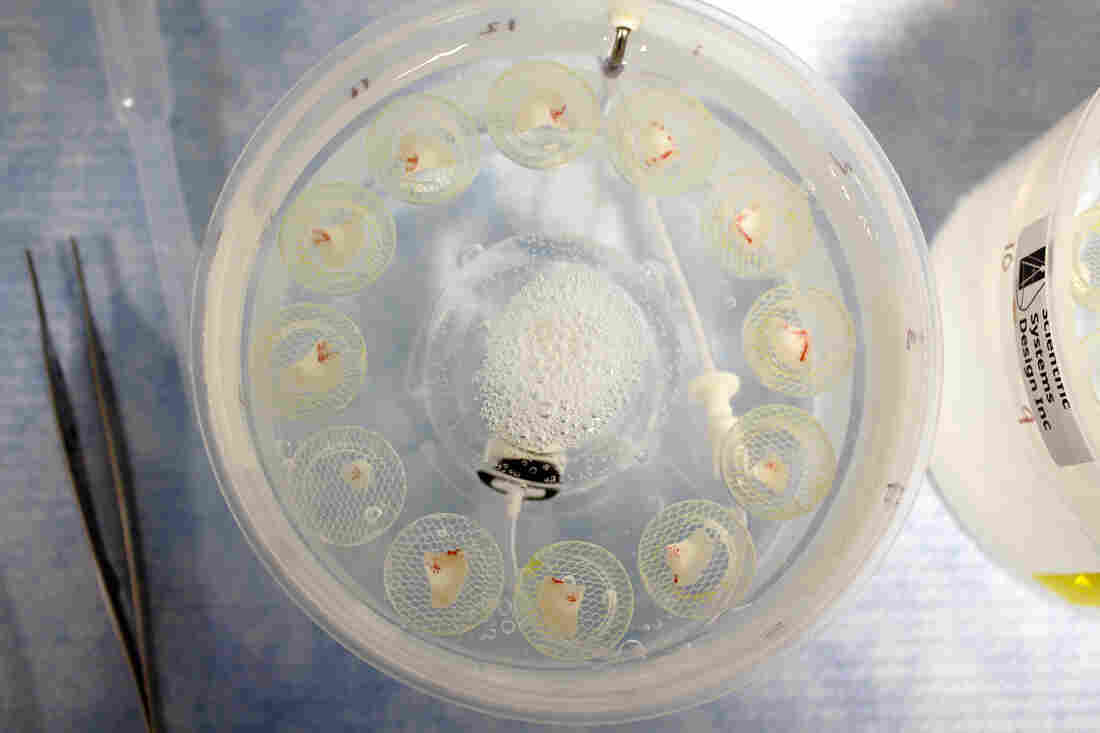 Fresh samples of brain tissue being kept alive so they can be used in experiments to study individual cells. Allen Institute hide caption 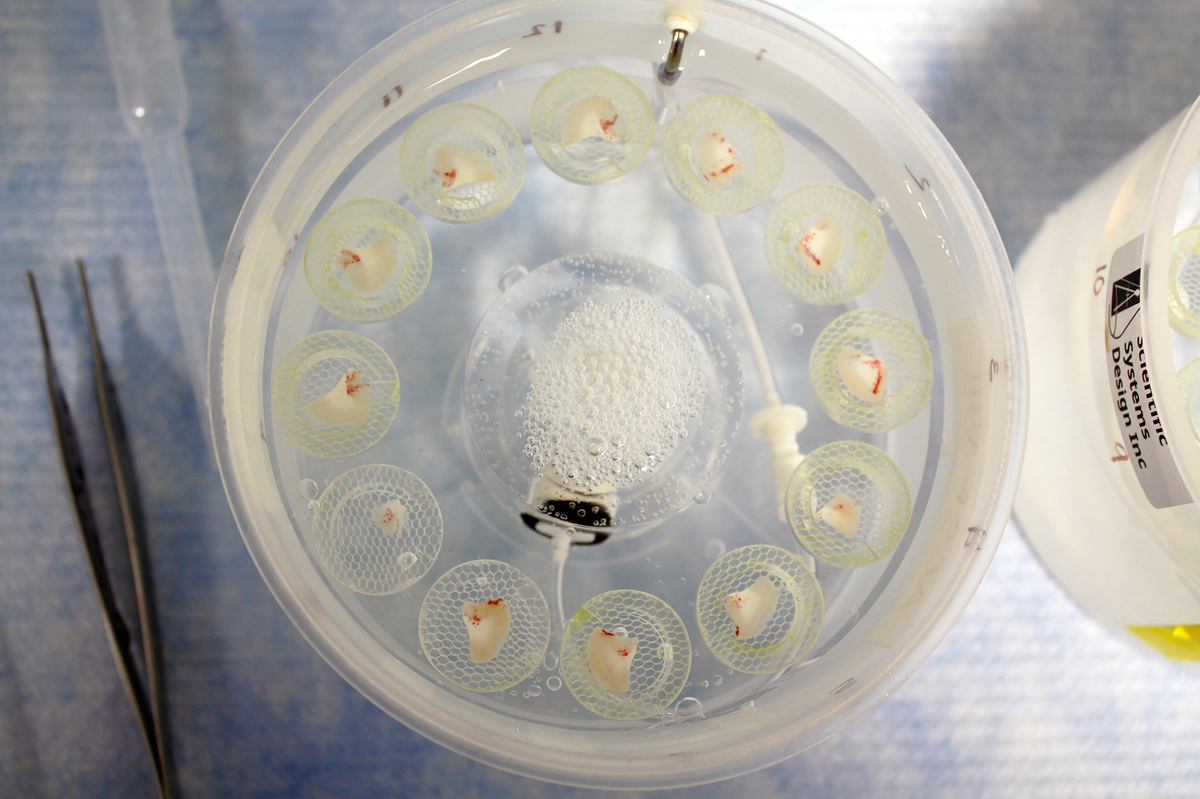 Fresh samples of brain tissue being kept alive so they can be used in experiments to study individual cells.

These surgeons often remove diseased brain tissue from patients with brain tumors or severe epilepsy. But to get to the problem area, surgeons frequently have to remove some healthy tissue from the brain's outer layer or cortex, which contains the cells involved in thinking, memory and consciousness.

"They cut that [healthy] piece of brain out and very often it's burned as medical waste," Koch says.

Koch thought there must be a way to learn from those bits of healthy brain. "So we now have people inside or just outside the operating room who receive those pieces of brain, put them in a special container and then rapidly move them over here," he says.

Each sample is "about the size of a sugar cube," says Jonathan Ting, an assistant investigator at the institute. "We're essentially keeping that tissue on life support" until it can be sliced into thin sections and studied under a microscope, Ting says.

Because the brain tissue is still alive when it reaches the lab, Ting says, "we can clearly observe specific cells talking to one another" via electrical signals.

3-D Rendering Of A Neuron

Those signals, as well as data about each cell's physical structure, are captured in digital form and added to The Allen Cell Types Database, which is available to anyone with an internet connection.

So far, the institute has captured electrical data from 300 living neurons taken from the brains of 36 different patients. There are 3-D reconstructions for 100 cells. Ultimately, the institute plans to add genetic information about some of the cells.

The cell types database already includes a huge amount of information on mouse brains. By adding human data, researchers should be able to learn more about the differences between the brains of mice and people, Koch says.

"The basic hardware is the same," he says. "But if you get close up you see there are lots and lots of small differences that translate into the fact that I will never have a dinner conversation with a mouse."

"Ultimately we want to understand how is it that this highly organized matter gives rise to our inner life," Koch says.

In the meantime, Allen Institute scientists are learning about some very basic differences between mouse and human brain cells. One early observation is that human brain cells can survive a lot longer in the lab.

Mouse cells typically become unusable in less than 10 hours, Ting says. "We found that this surgical tissue from people can survive up to 10 times longer."

Obtaining human brain tissue requires not only cooperation from surgeons, but from their patients, says Ed Lein, an investigator at the institute.

"It's really quite poignant to work with these tissues that participated in the thoughts and memories of an individual just an hour before," Lein says.