Accessibility links
Shorter Enrollment Period On Health Insurance Exchanges : Shots - Health News Open enrollment on the exchanges for health insurance created by the Affordable Care Act will be different this time around. Here are some tips on how to make the most of it. 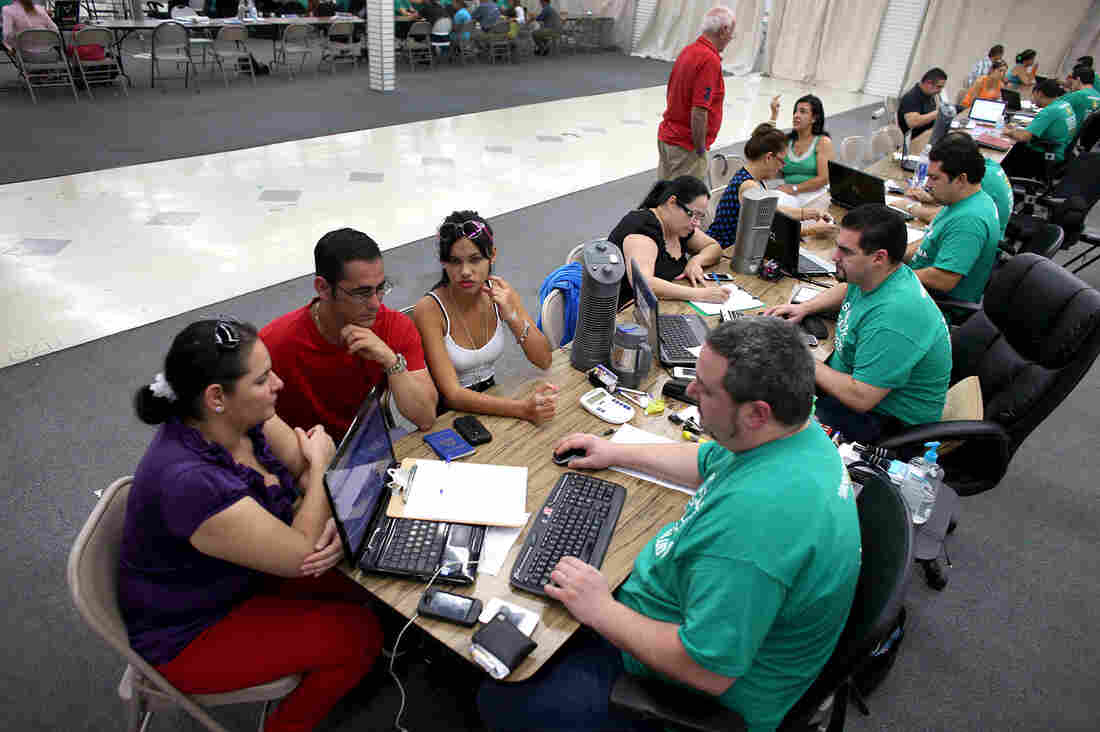 Yudelmy Cataneda (from left), Javier Suarez and Claudia Suarez talk about health insurance with Yosmay Valdivian (right), an insurance agent from Sunshine Life and Health Advisors, at the Mall of Americas in Miami in 2014. Joe Raedle/Getty Images hide caption

Yudelmy Cataneda (from left), Javier Suarez and Claudia Suarez talk about health insurance with Yosmay Valdivian (right), an insurance agent from Sunshine Life and Health Advisors, at the Mall of Americas in Miami in 2014.

Open enrollment for people who buy their own health insurance starts Wednesday and ends Dec. 15. That means there are only 45 days to shop for coverage. The shorter enrollment period this year is just one of the changes to the process for buying insurance under the Affordable Care Act.

Here are five important factors to keep in mind if you plan to sign up for ACA coverage for 2018.

1. The health law has not been repealed.

Despite the efforts of President Trump and the Republican-led Congress, the Affordable Care Act remains the law of the land.

That means if you don't get insurance through your job or a government program, you will still be able to get coverage for a set of comprehensive benefits regardless of whether you have pre-existing conditions. It also means that if you meet income eligibility requirements, you will be able to get help from the federal government to afford your premiums, and, possibly, deductibles and other out-of-pocket costs.

Those cost-sharing reduction subsidies help hold down out-of-pocket costs for people with incomes under 250 percent of poverty (a little more than $30,000 a year for an individual). They will be available despite Trump's decision to stop the federal government from reimbursing insurers for the required discounts. Most insurers are making up the difference by raising premiums.

Meanwhile, if you get premium assistance in the form of tax credits, how much you pay for coverage is not likely to be much higher, either. That's because as premiums go up, so do federal premium subsidies. (More about this below.)

2. The requirement for most people to have insurance — and most employers to offer it — is also still in effect.

Under the law, most households that earn enough to owe federal income tax are required either to have health insurance or pay a fine due with their taxes. The fine for not having insurance in 2017 (and 2018) is the greater of $695 or 2.5 percent of the taxpayer's income. You can claim an exemption from the fine if you demonstrate that you cannot afford insurance offered in your area.

The IRS has said it will start rejecting returns filed in 2018 that don't indicate whether the taxpayer had health insurance.

Larger employers (those with 50 or more full-time workers) are also mostly required to offer coverage to their workers or pay a penalty. That coverage must be comprehensive and affordable.

While it's always been important to compare options, this year it's more crucial than ever.

For starters, you want to shop and pick a plan yourself so that the marketplace doesn't automatically enroll you for 2018 coverage. That's because the auto-renewal date this year is expected to be Dec. 16, the day after the open-enrollment period ends. So, if you are assigned a plan you don't like, you won't be able to change it until the 2019 open-enrollment season.

Shopping allows you to compare plans, including which doctors and hospitals are in-network, as well as premiums and copayments, which can vary.

This year, premiums are going up, in some areas by double digits, due in part to the Trump administration's mid-October decision to cut off cost-sharing subsidies to insurers.

But the premium increases may not affect all plans and "metal levels," which is why you should compare prices.

Some states, for example, instructed insurers to load those additional costs only onto the silver-level plans, which are midlevel plans that cover about 70 percent of an average person's medical costs. The policyholder picks up the rest of the cost in deductibles and copayments. As a result of the state's pricing decisions, though, gold-level plans, which cover an average of 80 percent of costs, might in some cases have lower premiums than silver plans.

Of course, if you get a cost-sharing reduction — meaning lower copayments and deductibles — because your individual income is below $30,150, you will need to stay in a silver plan.

The Kaiser Family Foundation's FAQ on the health law

Another factor to consider, however, is that the increased prices for silver plans may drive up a different subsidy — the tax credits that help people pay premiums. Those remain in place for people earning up to 400 percent of the federal poverty level. They could rise because they are tied to the cost of a benchmark silver plan in each region.

In some cases, the tax credit increase could be enough to make a "bronze" or gold plan have a very low or even zero monthly premium, according to a Congressional Budget Office analysis done before the administration took action. But, of course, consumers not getting either subsidies could be looking at higher costs. That gives them all the more reason to comparison-shop.

Some experts suggest looking beyond the official federal and state marketplaces — whether directly checking out an insurer's website, working through a broker or consulting a private online website — because some states ordered insurers to load additional costs resulting from the Trump order only onto marketplace plans. Therefore, plans off the marketplace might cost less.

Outside of the official marketplaces there may be more insurers selling lower-cost, short-term policies.

Sabrina Corlette, who studies the marketplace for Georgetown University's Health Policy Institute, said that such plans, while less expensive, may not cover all benefits and might exclude coverage of pre-existing conditions.

Those plans also don't meet ACA requirements for "minimum essential coverage," so policyholders would still be liable for paying a tax penalty. "There are going to be some folks out there taking advantage of consumer confusion," warned Corlette, adding that shoppers who buy outside of state or federal marketplaces "should go to a reputable broker."