Accessibility links
People Have Higher Medical Debt In States That Didn't Expand Medicaid : Shots - Health News Medical debt is down across the country. In states that expanded Medicaid under the Affordable Care Act, the reduction is sharper. 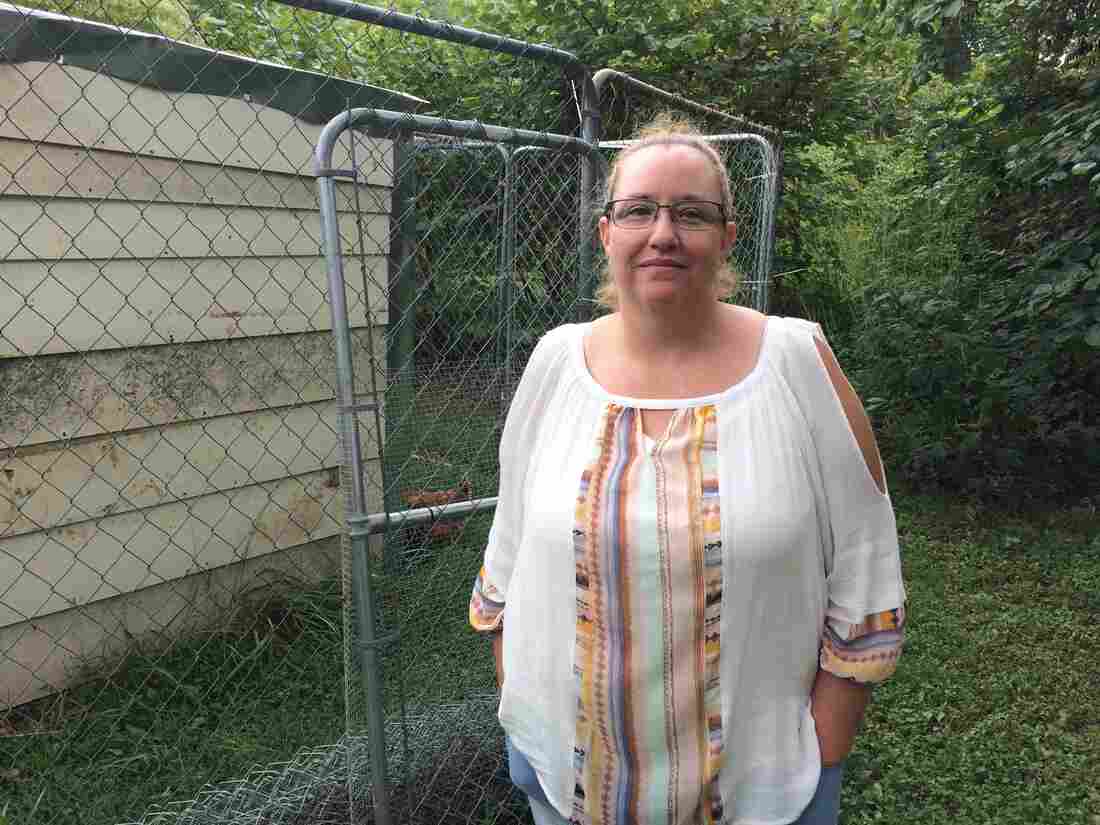 Medical debts weigh on Geneva Wilson, who keeps a chicken and rooster in a coop behind her cabin in rural southwest Missouri. Alex Smith/KCUR 89.3 hide caption 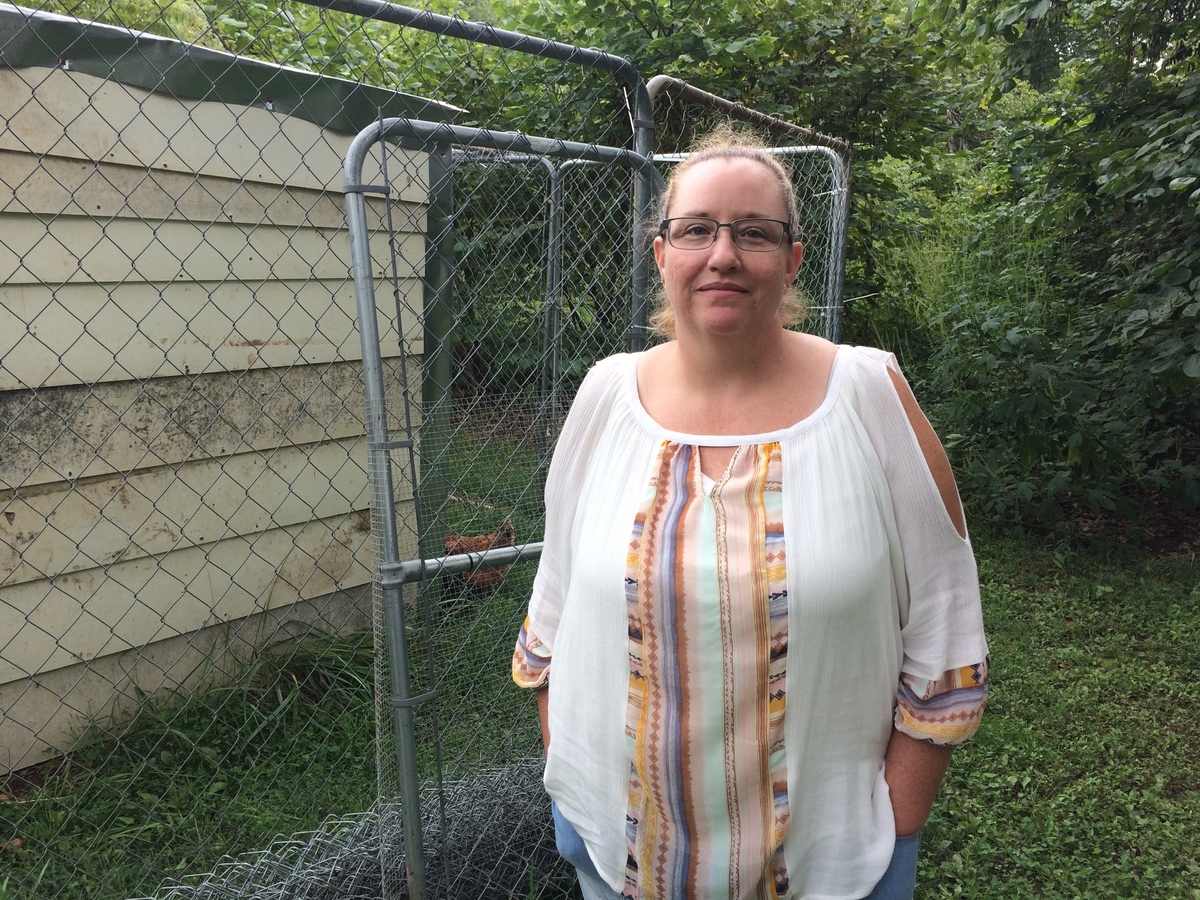 Medical debts weigh on Geneva Wilson, who keeps a chicken and rooster in a coop behind her cabin in rural southwest Missouri.

As the administration and Republicans in Congress look to scale back Medicaid, many voters and state lawmakers across the country are moving to make it bigger.

On Tuesday, Maine voters approved a ballot measure to expand Medicaid under the Affordable Care Act. Advocates are looking to follow suit with ballot measures in Utah, Missouri and Idaho in 2018.

Virginia may also have another go at expansion after the Legislature thwarted Gov. Terry McAuliffe's attempt to expand Medicaid. Virginia voters elected Democrat Ralph Northam to succeed McAuliffe as governor in January, and Democrats made inroads in the state legislature, too.

An exit poll of Virginia voters on Election Day found that 39 percent of them ranked health care as their No. 1 issue. More than three-quarters of the Virginians in this group voted for Democrats.

A study from the Urban Institute may shed some light on why Medicaid eligibility remains a pressing problem: medical debt. While personal debts related to health care are on the decline overall, they remain far higher in states that didn't expand Medicaid.

In some cases, struggles with medical debt can be all-consuming.

Geneva Wilson is in her mid-40s and lives outside of Lowry City, Mo. She has a long history of health problems, including a blood disorder, depression and a painful misalignment of the hip joint called hip dysplasia.

She's managed to find some peace living in a small cabin in the woods. She keeps chickens, raises rabbits and has a garden. Her long-term goal is to live off her land by selling what she raises at farmers markets.

Her health has made it hard to keep a job and obtain the insurance that typically comes with it. And Missouri's stringent Medicaid requirements — which exclude nondisabled adults without children — have kept her from getting public assistance.

Since graduating from college more than 20 years ago, Wilson has mostly had to pay out of pocket for medical care, and that's left her with a seemingly endless pile of medical debt.

"As soon as I get it down a little bit, something happens, and I have to start all over again," Wilson says.

Right now her medical debt stands at about $3,000, which she pays down by $50 a month. She desperately needs a hip replacement, but she canceled the surgery because, even with deeply discounted rate from a nearby hospital, she can't afford it.

"Approximately $11,000 is what would come out of my pocket to pay for the hip. That's my entire pretax wage from last year," Wilson says. "So it's kind of on hold, but I don't know if I can survive the year without going ahead and trying to get it done."

For many people like Wilson, medical debt can be nearly as problematic as their illness. In 2015, 30.6 percent of Missouri adults ages 18 to 64 had past due medical debt, the seventh-highest rate in the country. Kansas, at 27 percent, had the 15th highest rate. In Maine, which voted to expand Medicaid this week, it was 27.7 percent.

Researchers Aaron Sojourner and Ezra Golbertstein of the University of Minnesota studied financial data from 2012 to 2015 for people who would be eligible for Medicaid where it was expanded.

They found that in states that didn't expand, the percentage of low-income, nonelderly adults with unpaid medical bills dropped from 47 to 40 percent within three years.

"The economy improved and maybe other components of the ACA contributed to a 7 percentage point reduction," Sojourner says. "Where they did expand Medicaid, it fell by almost twice as much."

Those states saw an average drop of 13 percentage points, from 43 to 30 percent.

Medicaid, as opposed to private insurance, is the key, says The Urban Institute's Kyle Caswell, because it requires little out-of-pocket costs.

Even if Medicaid patients need lots of care, there aren't on the hook for big out-of-pocket costs in the same way someone with private insurance might be.

"We would certainly expect that their risk to out-of-pocket expenses to be much lower, and ultimately the risk of unpaid bills to ultimately be also lower," Caswell says.

But Medicaid's debt-reducing advantages over private insurance could disappear under the leadership of the Trump administration.

Indiana's Claims About Its Medicaid Experiment Don't All Check Out

Shortly after Seema Verma was confirmed as the Administrator for the Centers for Medicare & Medicaid Services, she and Tom Price, then head Department of Health and Human Services, sent a letter to the governors outlining their plans for Medicaid.

The letter encouraged states to consider measures that would make their Medicaid programs operate more like commercial health insurance, including introducing premiums and copayments for emergency room visits.

Verma says that by giving recipients more "skin in the game," they will take more responsibility for the cost of care and save the program money.

Republican proposals in Congress to repeal and replace the Affordable Care Act would have eliminated or limited Medicaid expansion. And that would have affected the last few years' downward trend in medical debt.

"Anything that reduces access to Medicaid most likely would have the reverse effect of what of we're seeing in our paper," Caswell says. "Reduced access to Medicaid would likely increase exposure to medical out-of-pocket spending and ultimately unpaid medical bills."

As Geneva Wilson tends to her chickens, she says she tries not to think too much about her medical debt or how she'll pay for that hip replacement.

"It's going to the point where, if I were to go shopping at Walmart, I would have to get one of the carts you drive because I can't manage," she says.

Wilson has already sold her jewelry, some furniture and a wood stove to pay down her debts. Now there's not much left to sell except her cabin and her land.

"Probably the homestead and garden that I want, that I've been wanting and trying to work for, I don't think they are a viable dream either," Wilson says. "It's hard losing your dreams."

This story is part of a reporting partnership with NPR, KCUR and Kaiser Health News. Alex Smith can be reached on Twitter at @AlexSmithKCUR.