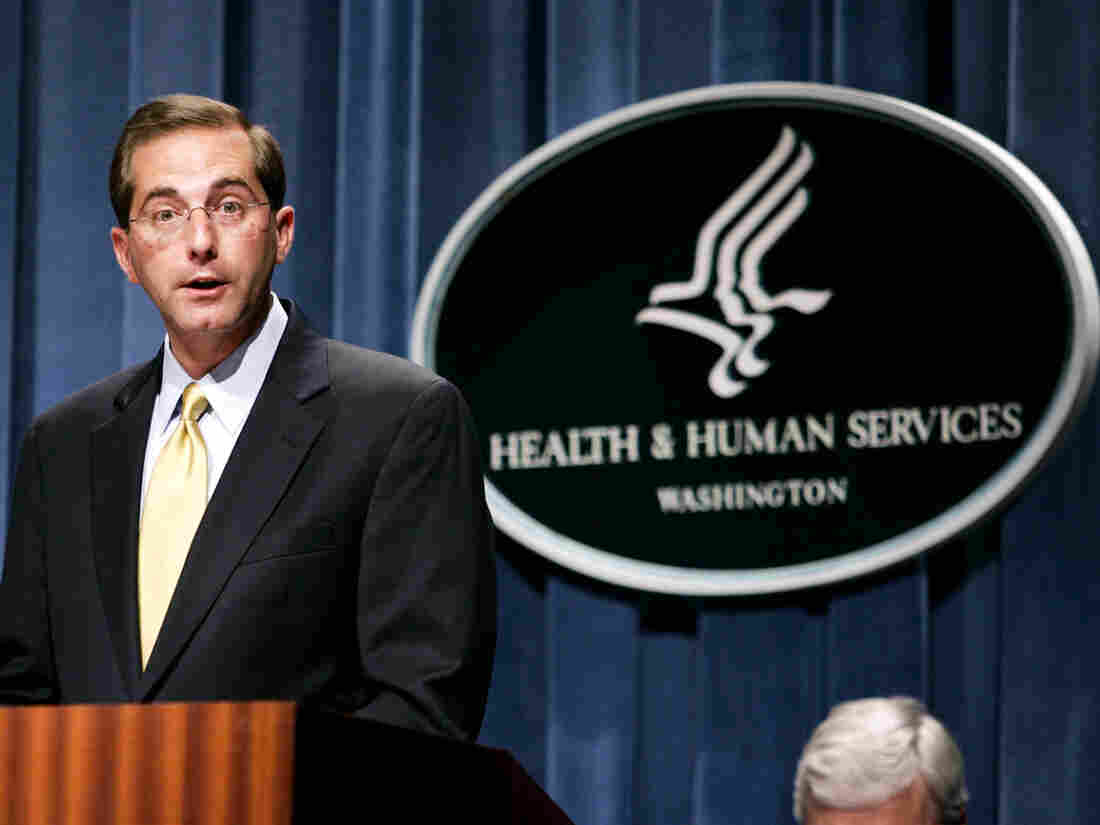 Alex Azar, who was deputy secretary for Health and Human Services in the George W. Bush administration, is President Trump's pick to replace Dr. Tom Price as head of the department. Evan Vucci/AP hide caption 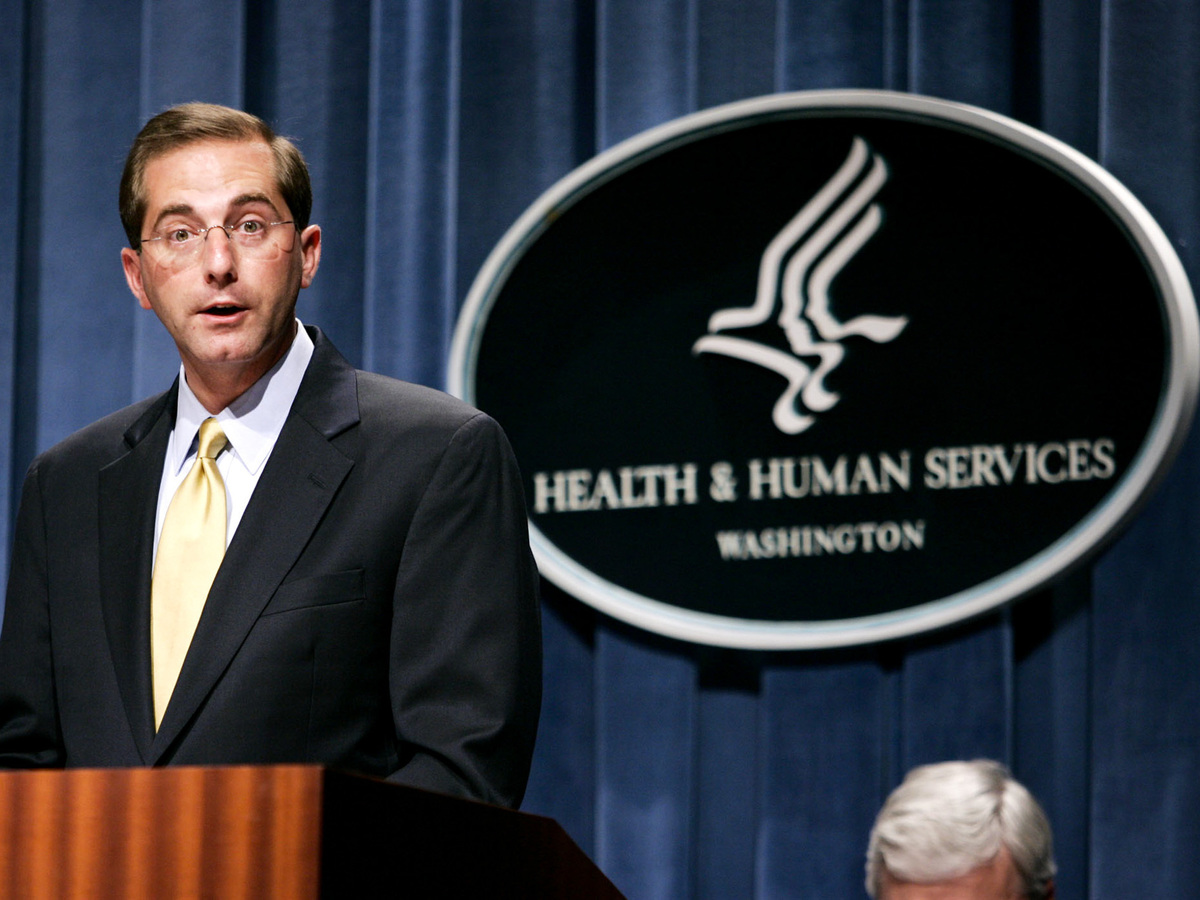 Alex Azar, who was deputy secretary for Health and Human Services in the George W. Bush administration, is President Trump's pick to replace Dr. Tom Price as head of the department.

President Trump is nominating a former pharmaceutical executive to lead the Department of Health and Human Services, the agency that, among other things, regulates prescription drugs.

The nomination comes at a time when rising drug prices have become a hot political issue.

Happy to announce, I am nominating Alex Azar to be the next HHS Secretary. He will be a star for better healthcare and lower drug prices!

On Twitter on Monday, Trump announced the nomination of Alex Azar, who until January had served as president of the U.S. arm of Eli Lilly & Co., based in Indianapolis. He said Azar, whose own Twitter feed is private, would be "a star for better healthcare and lower drug prices."

Azar, who served as deputy HHS secretary under President George W. Bush, is known as a detail-oriented bureaucrat who understands how to work the regulatory system to get things done.

"He's precise, highly motivated, he has high standards for performance for himself and for other people," said Mike Leavitt, who was HHS secretary when Azar was deputy. "He had full responsibility as deputy secretary for the regulatory processes at HHS."

Leavitt says Azar is likely to use that knowledge to alter the Affordable Care Act, or Obamacare, to make it more friendly to Republican ideals. Azar, he says, can work to "change the ideology under which the existing law is implemented."

"That's the place where they have essential unilateral authority, if they follow the administrative rules act," Leavitt told Shots. "Alex understands that process better than almost anybody and that undoubtedly had some bearing on the president's decision to appoint him."

Azar also favors moving authority to the states over Medicaid, the program that provides health care to the poor, elderly and disabled. That means turning over the program to the states to make them "better stewards of the money," he said in an interview at a February conference on YouTube. "It turns these sovereign states and governors from supplicants to the HHS secretary into people running their own health insurance system for the poor."

He said at the time that HHS could use its regulatory powers to allow states to customize the rules around Medicaid. Seema Verma, who runs the Centers for Medicare & Medicaid Services and would work for Azar if he's confirmed, has said she, too, favors giving states waivers to create their own Medicaid systems.

Since then, the president hasn't said much specifically on the subject. But he did mention it when he announced his intention to nominate Azar on Twitter.

Azar spent five years at Lilly, which makes several blockbuster medications, including Cialis, which treats erectile dysfunction; the antidepressant Cymbalta; and several forms of insulin. Insulin prices have drawn particular fire because they keep spiraling higher, even though insulin has been around almost a century.

The prices of Lilly's insulin drugs Humalog and Humulin, for instance, have both risen about 225 percent since 2011, according to data from the investment research firm Bernstein.

"Drug corporations have undue influence over health policy in America, and they use it to make money on the backs of patients and taxpayers," said Ben Wakana, executive director of Patients For Affordable Drugs, an advocacy group.

Still, Wakana says Azar has a good track record. "Mr. Azar is well-qualified and has the chance to stand up for patients because he knows exactly how our drug pricing system is broken. If he wants to take meaningful action to lower drug prices, we want to help him."

While Azar was at Lilly, he also sat on the board of directors of the Biotechnology Innovation Organization, a trade group for biotech companies. Previously, Azar served as general counsel and later as deputy secretary of Health and Human Services during the George W. Bush administration.

If he's confirmed, Azar would replace Dr. Tom Price, who resigned from HHS in September after a Politico investigation found that he had taken private charter aircraft on work-related trips at times when cheaper commercial flights were available.

Azar, a lawyer, would take over one of the largest federal agencies with an annual budget of more than $1 trillion. The department runs the Medicare and Medicaid programs, is responsible for implementation of the Affordable Care Act and oversees the National Institutes of Health and the Food and Drug Administration.