Accessibility links
Blood Pressure Targets Lowered For People At Risk Of Heart Attack And Stroke : Shots - Health News Updated blood pressure guidelines move the goal post for millions of people at risk for heart attacks and strokes. The change is likely to lead to more people taking medicines for hypertension. 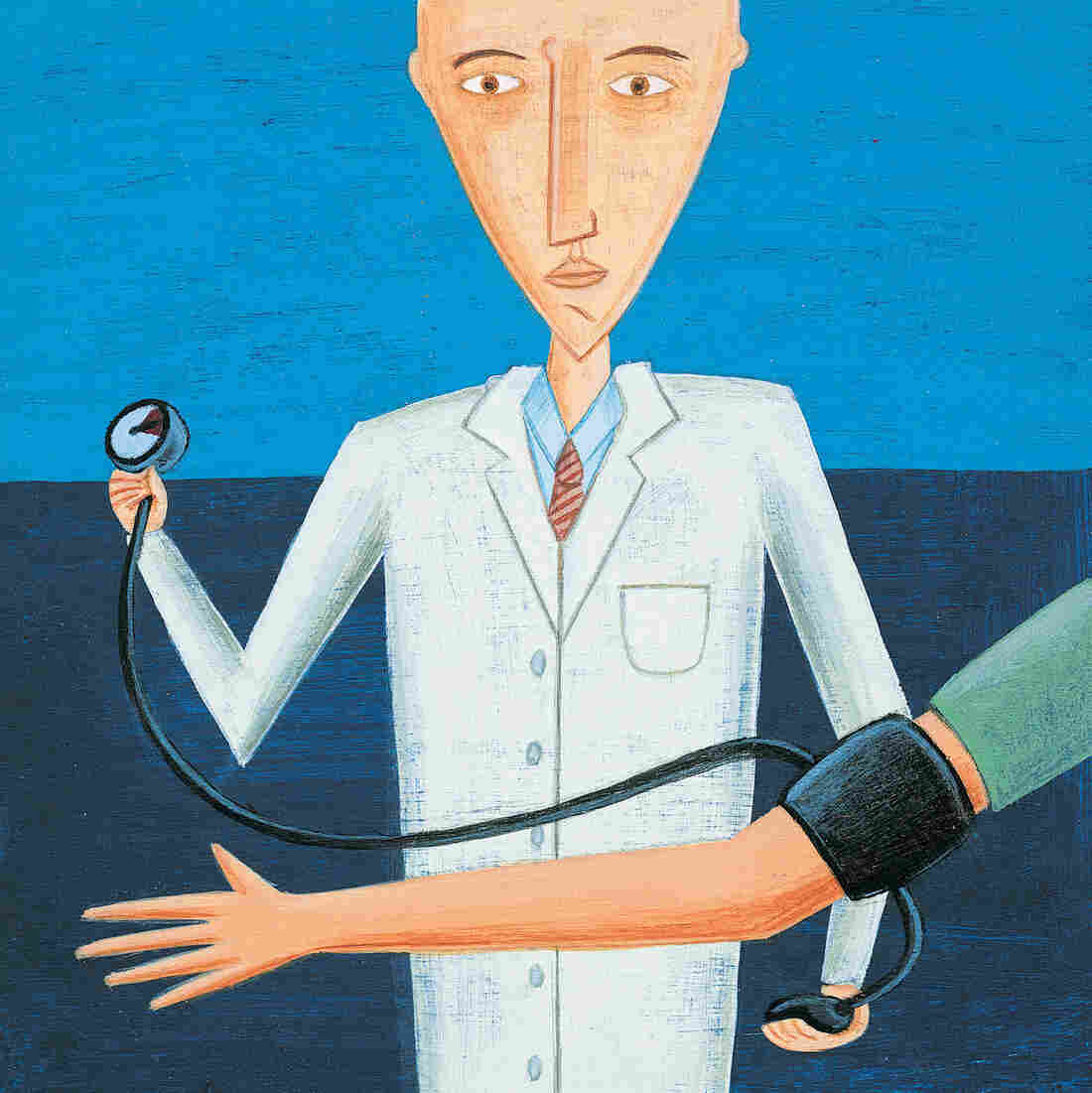 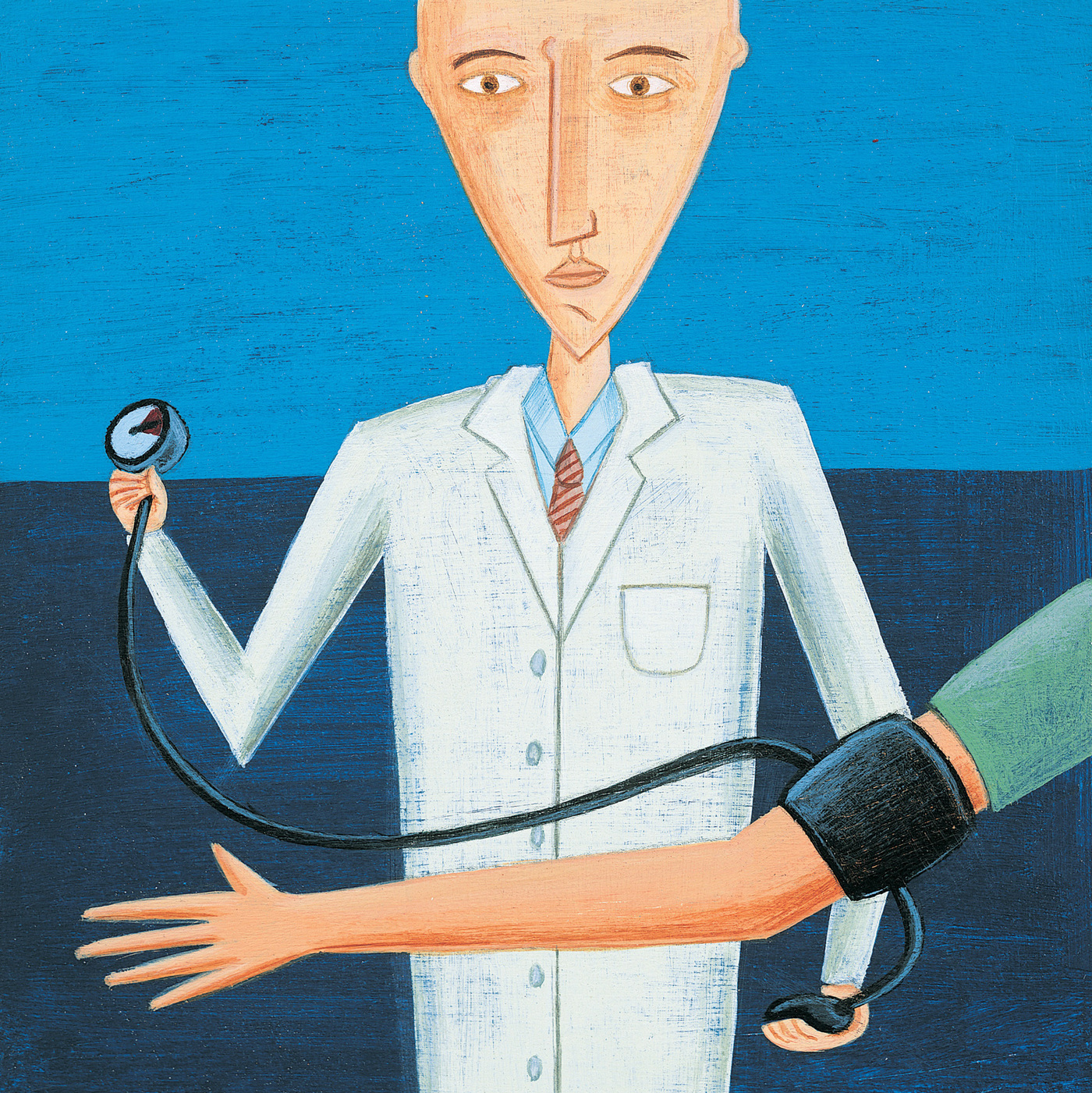 Now the American College of Cardiology and the American Heart Association have updated blood pressure guidelines that move the goal post for many people.

If you have heart disease, chronic kidney disease or diabetes, then your target now for systolic blood pressure has moved down to 130 and for diastolic blood pressure to 80. Same goes if your 10-year risk of having a heart attack or stroke is greater than 10 percent (determined by a calculator found here).

The focus on people who have a high likelihood of heart disease and stroke is an effort to maximize the health gains from risk reduction.

To decide whether the blood pressure targets should change, the ACC and AHA assembled 21 experts who reviewed all the relevant studies, including a landmark study by the National Institutes of Health that supported lower target levels. In the end, they were unanimous in endorsing a lower standard, believing it would reduce risk and be worth the extra medications for people at high risk. Importantly, they did not change the standard for low-risk individuals.

The big change is that we will end up labeling many more people with hypertension and recommending drug treatment for many more people, too. The hope is that more aggressive treatment will reduce life-threatening heart attacks and strokes.

My colleagues and I conducted an analysis to estimate how many people would be affected. We determined that among those ages 45 to 75, an additional 15 million more people are now considered to have hypertension. Overall, a majority of people — 63 percent — in this age group would now be said to have hypertension.

Among all Americans, another analysis suggests that more than 100 million have it.

The new guidelines would mean 8 million more people would be recommended to start blood pressure drugs and an additional 14 million would be advised to have their current therapy increased.

So what should people actually do?

This guideline should guide discussions between clinicians and patients about how people feel about taking drugs, how they tolerate drugs, and which strategies fit them best.

Odds Are, They're Taking Your Blood Pressure All Wrong

The days are pretty much over when doctors could walk into the office and tell people what to do, write a prescription and expect them to comply. Decisions about care shouldn't be edicts. When that happens patients tend to tune out and leave prescriptions unfilled.

Clinicians and patients need to work collaboratively to set goals, aware of guidelines and the particular situation of each person.

People vary in their preferences. Some people don't like to take pills or don't tolerate them well. Some people think that when 30 people need to take a pill for years for one person to benefit, it's a good deal; others disagree.

There are many choices for blood pressure medications, and they are inexpensive; most are generics. The right choice for each individual may vary — and it may require trying a few different approaches.

Particularly for people with a systolic blood pressure between 130 and 140 who are being advised to ratchet up treatment, there should be a discussion about what the reduction in risk, if achieved, would mean for them and what it would take to get there. We will need tools that help people make informed choices and customize the information to each person. It's high time to move away from suggesting that one type of medical advice should fit all — even among people with high risk, there are many individual differences.

Amid the fanfare associated with the new guidelines, there are also a few things that haven't changed. In America, far too many people don't know that their blood pressure is high — and too few have had the opportunity for effective treatment even with the old standards.

We need to make sure that all Americans know their blood pressure and understand their options. Moreover, there are many effective strategies to reduce blood pressure that don't involve drugs, but they are too infrequently pursued.

The so-called DASH diet, even moderate physical activity, avoiding obesity and reducing stress can all be effective. They may sound mundane, but they can help people avoid having to pop pills. We need to help people appreciate the power of these approaches and make it easy for them to pursue these lifestyle strategies.

Overnight, many people discovered that they are now considered to have high blood pressure. With so many people now being considered hypertensive, maybe we should start thinking of it as less of a clinical condition and more as an opportunity for many people to work on ways to promote better health.

Harlan Krumholz is a cardiologist and the Harold H. Hines Jr. professor of medicine at Yale School of Medicine. He directs the Yale-New Haven Hospital Center for Outcomes Research and Evaluation that developed the readmission measures for the Centers for Medicare & Medicaid Services.