Accessibility links
Puerto Rico's Power Outages Have Led To Medicine Shortages On Mainland, Too : Shots - Health News The island is a major center for drug and medical device manufacturing. After Hurricane Maria, those products, including small IV bags, are running short throughout the U.S. 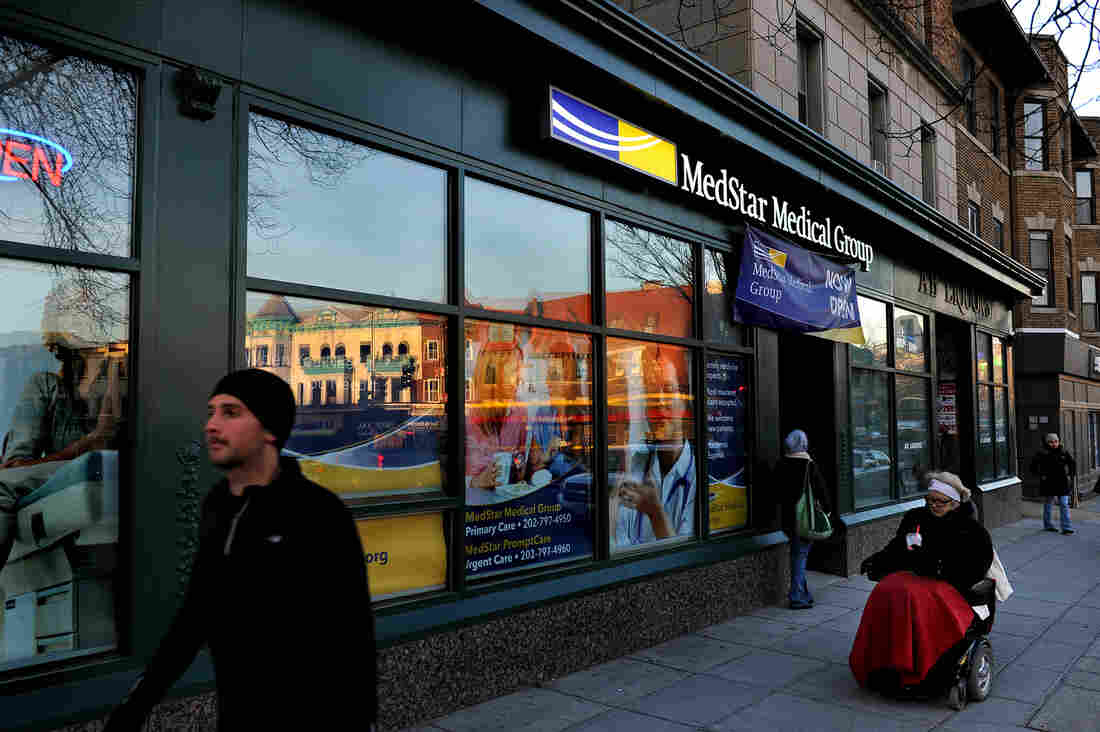 MedStar Health clinic in Washington, D.C. An affiliated MedStar hospital is just one of many facilities throughout the U.S. that have been hit with shortages of certain medications because of recent hurricane damage to manufacturers in Puerto Rico. Michael S. Williamson/The Washington Post/Getty Images hide caption 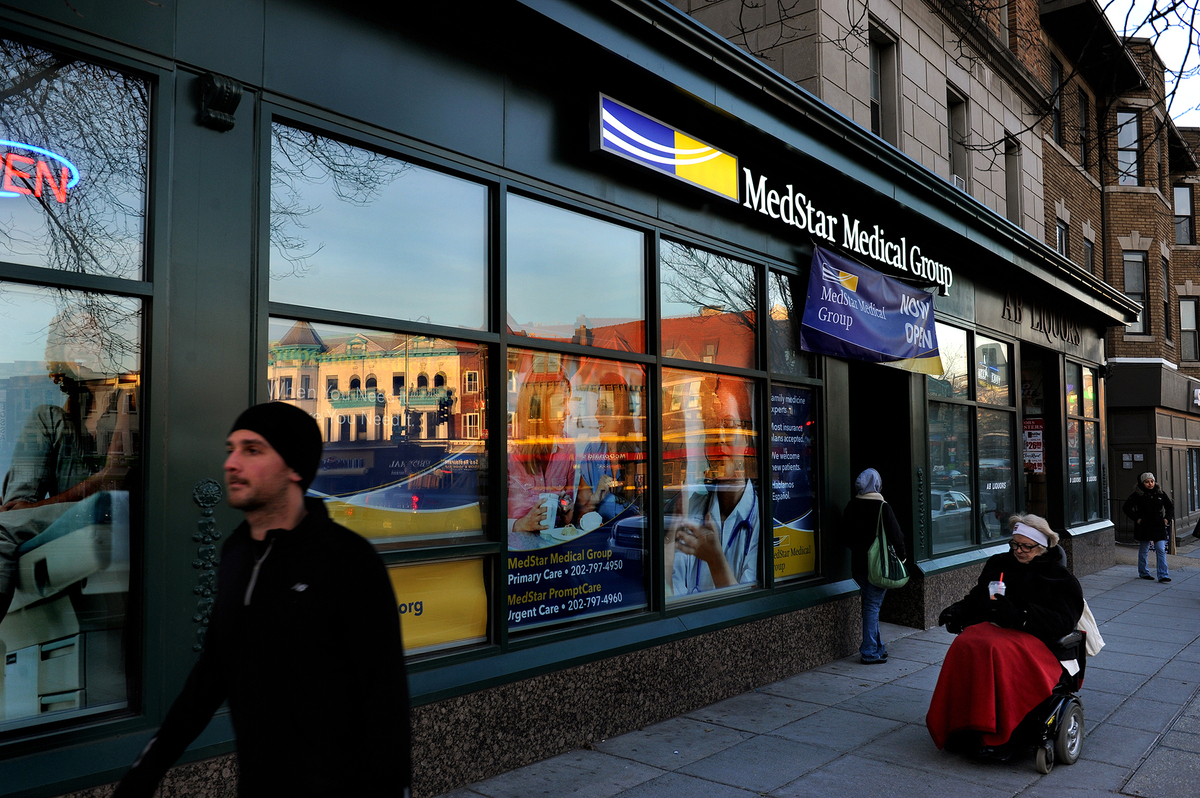 MedStar Health clinic in Washington, D.C. An affiliated MedStar hospital is just one of many facilities throughout the U.S. that have been hit with shortages of certain medications because of recent hurricane damage to manufacturers in Puerto Rico.

At MedStar Washington Hospital Center, doctors and nurses are moving as many patients as they can from intravenous medications to the same drugs in pill form.

If the patients are getting common antibiotics like ampicillin, and they can swallow, they're likely to be switched to pills, says Bonnie Levin, assistant vice president of pharmacy services for MedStar Health, which includes 10 hospitals in the Washington, D.C., area.

That's because MedStar, like many hospitals across the U.S., is running low on IV bags, especially the minibags that are used to deliver certain types of medicine. Some of these bags contain saline solution when shipped, and a nurse or hospital pharmacist adds the drug when it's ready to be used. Other bags come premixed with commonly used medicines.

"The plain bags, the mixed bags. There are shortages of all kinds of small-volume medications," Levin says.

The shortage is a direct result of hurricane damage in Puerto Rico. It has been eight weeks since Hurricane Maria hit the island, knocking out electricity and wreaking havoc on many roads, homes and other buildings.

The storm damaged many of the island's more than 100 drug and medical device manufacturers. Puerto Rico produces about $40 billion worth of pharmaceuticals for the U.S. market, according to the Food and Drug Administration — more than any other state or territory.

Three of those plants belong to Baxter, one of the biggest suppliers of IV bags to U.S. hospitals. All three of Baxter's plants shut down temporarily, the company says, and at least two are still running on generators.

One of Baxter's factories that makes the minibags for intravenous medicines is very remote. 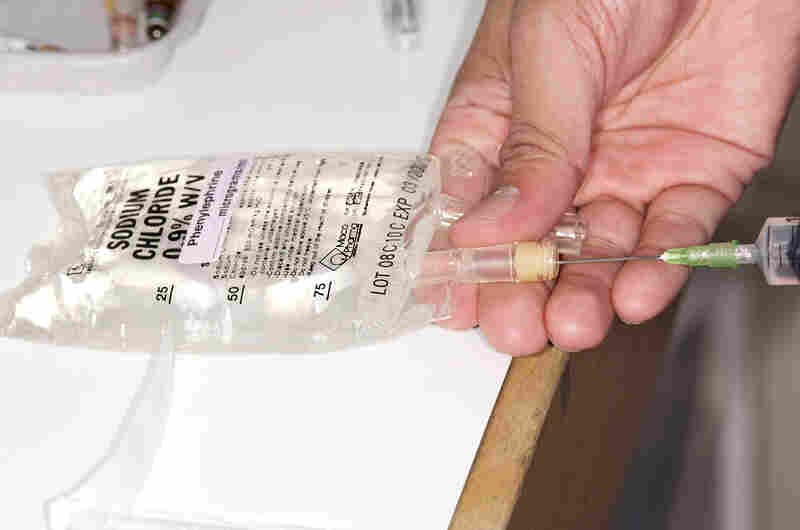 Power outages in Puerto Rico have resulted in a shortage of IV minibags, similar to the one seen here. Baxter International makes most such bags for the U.S. market at its plants in Puerto Rico. Dr P. Marazzi/Science Source hide caption 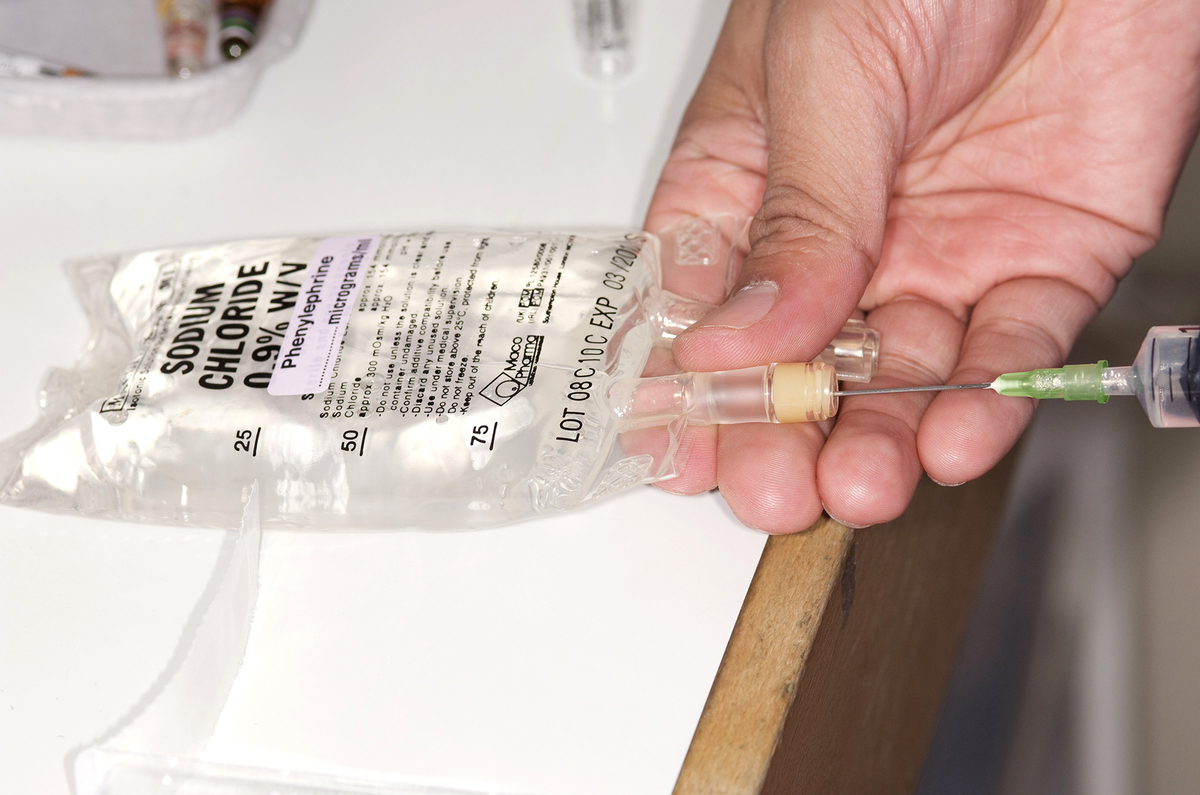 Power outages in Puerto Rico have resulted in a shortage of IV minibags, similar to the one seen here. Baxter International makes most such bags for the U.S. market at its plants in Puerto Rico.

"It's atop a mountain, and the roads have been very compromised. They are still running on generators the last we knew, and they are at partial capacity," says Christi Guest, who runs the disaster response team for Vizient, a company that, among other things, sources medical supplies for hospitals all over the U.S.

Baxter isn't the only company on the island struggling to meet demand.

"The manufacturing environment in Puerto Rico, as far as we are informed, is largely still running on generators — compromised capacity," Guest says.

Dr. Scott Gottlieb, commissioner of the Food and Drug Administration, said in a speech at the National Press Club on Nov. 3 that most of the plants are operational.

But getting back to normal "is a monumental task given the logistical challenges they face," he told reporters.

So the manufacturers are rationing the medications and supplies that they do manage to make. The idea is to prevent any one hospital from buying the entire supply.

For example, Baxter has restricted distribution of IV bags to 50 percent of a hospital customer's usual order, according to Vizient and MedStar.

Levin says the hospital isn't even receiving that much.

"I don't think we're getting 50 percent, but we're getting sporadic shipments," she says. "We used to get shipments every week. One of our hospitals got five cases of IV bags yesterday, and it was an order they had placed a month ago."

The shortage has become severe enough that the FDA is allowing Baxter to import minibags, amino acids and other products from its plants in Ireland, Australia, Canada, Mexico and England.

The FDA updates its list of medication shortages regularly and many products have been added since Maria hit Puerto Rico. But it's impossible to know exactly which shortages are linked to disruptions on the island.

Stephanie Hale also works at Vizient, helping the company's hospital clients manage how they use products that are in short supply

She says she and her colleagues are trying to change how hospital emergency rooms think about the use of IVs.

"Every patient that came into the emergency department, that was admitted to a unit, automatically was placed on fluids to maintain hydration," she says. "But what we've been suggesting to our members more recently is that they evaluate the actual need and assess patients more specifically and accurately for IV solutions."

In Washington, D.C., MedStar's Levin says her hospital has been able to manage the shortages, so far.

"We're really fortunate in that we haven't disrupted patient care," Levin says. "If this went on for two years, I'd have some concerns. We expect supply to return in three to six months."

An earlier version of this story misspelled Christi Guess's name as Kristi Guest.