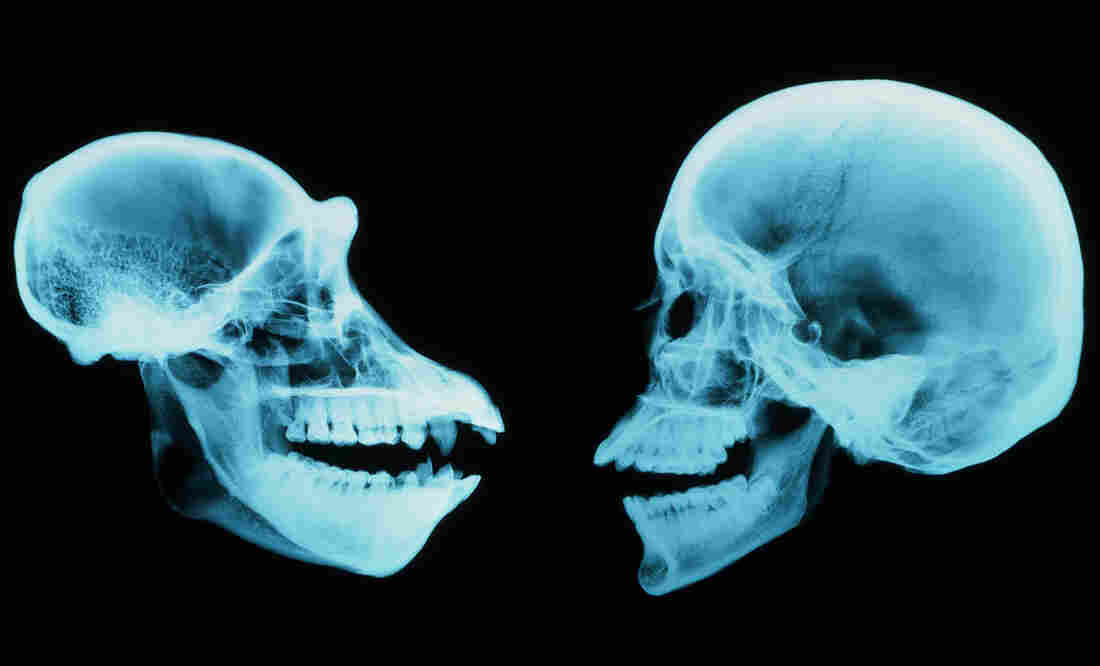 A chimpanzee skull, at left, and a human skull. Scientists are probing why our brains evolved so differently despite many similarities. D. Roberts/Science Photo Library/Getty Images hide caption 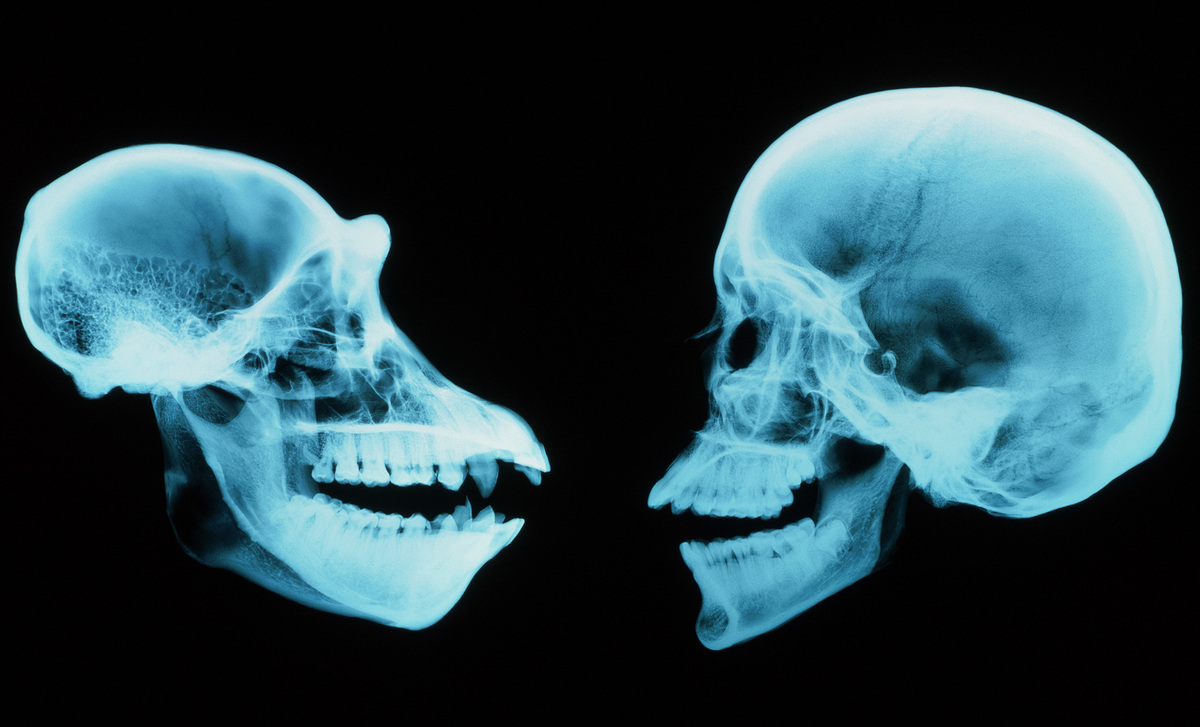 A chimpanzee skull, at left, and a human skull. Scientists are probing why our brains evolved so differently despite many similarities.

A brain system involved in everything from addiction to autism appears to have evolved differently in people than in great apes, a team reports Thursday in the journal Science.

The system controls the production of dopamine, a chemical messenger that plays a major role in pleasure and rewards.

"Humans have evolved a dopamine system that is different than the one in chimpanzees," says Nenad Sestan, an author of the study and a professor of neuroscience at Yale.

That could help explain why human behavior is so different from our nearest relatives even though our brains are remarkably similar, he says. It might also shed light on why people are vulnerable to mental disorders such as autism.

The finding came from a massive, multicenter effort to compare the brains of several species. Researchers looked at 247 samples of brain tissue from five macaque monkeys, five chimpanzees and six people. They looked at which genes were turned on or off in 16 regions of the brain.

And in most places, the differences among species were subtle. But there was a striking difference in the neocortex, an area of the brain that is much more developed in people than in chimpanzees.

The team found that a gene called TH, which is involved in the production of dopamine, was expressed in the neocortex of people, but not chimpanzees. "That caught our attention," says Andre Miguel Sousa, another author of the study who works in Sestan's lab at Yale.

Dopamine is best known for its role in the brain's reward system, which responds to everything from sex and food to addictive drugs. But dopamine also helps regulate emotional responses, memory and movement. And abnormal dopamine levels have been linked to disorders including Parkinson's, schizophrenia and autism.

It's still not clear how differences in the dopamine system affect the human brain, Sestan says. "But we know where to look to try to find out why we have this and chimpanzees don't," he says.

One tantalizing possibility is that dopamine plays a role in humans' unique ability to pursue rewards that are months or even years away. That idea has been suggested by Robert Sapolsky, a professor of biology and neurology at Stanford University.

Sapolsky cites evidence that in humans, dopamine levels rise dramatically when we anticipate rewards that are uncertain and far in the future, like retirement or even the afterlife. That could explain what motivates people to work for things that have no obvious short-term benefit, he says.

The new study doesn't confirm Sapolsky's hypothesis, Sestan says. But the findings do "lead in that direction."

The neocortex wasn't the only area of the brain to show differences in gene expression among species.

The team also found differences in much older areas, including an ancient structure called the cerebellum."A very old part of the human brain seems to have very recent changes," Sestan says.

It will take years to fully understand what all the changes mean, he says. But the finding could eventually help explain what makes the human brain unique, and what goes wrong in a range of brain diseases.