Accessibility links
Hospitals May Be Held Accountable For Opioid Addiction After Surgery : Shots - Health News Many surgeons prescribe strong pain medicine without knowing how much their patients actually need. A group of doctors says hospitals should be accountable for patients' long-term opioid use.

Listen · 4:18 4:18
Should Hospitals Be Punished For Post-Surgical Patients' Opioid Addiction? 4:18 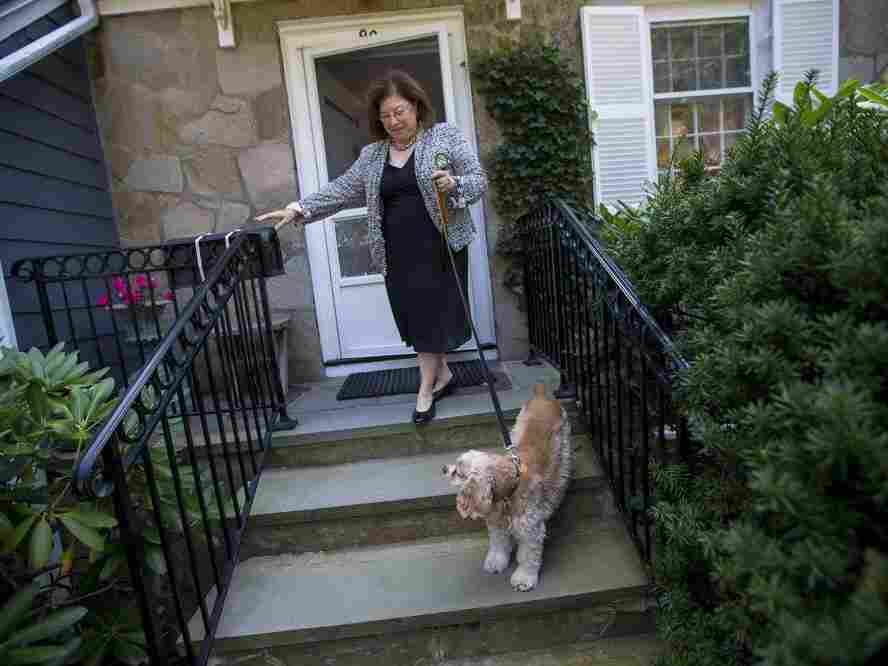 After two weeks of recovery from an addiction to opioids prescribed by her surgeon, Katie Herzog takes a walk with her dog, Pippen. Jesse Costa/WBUR hide caption 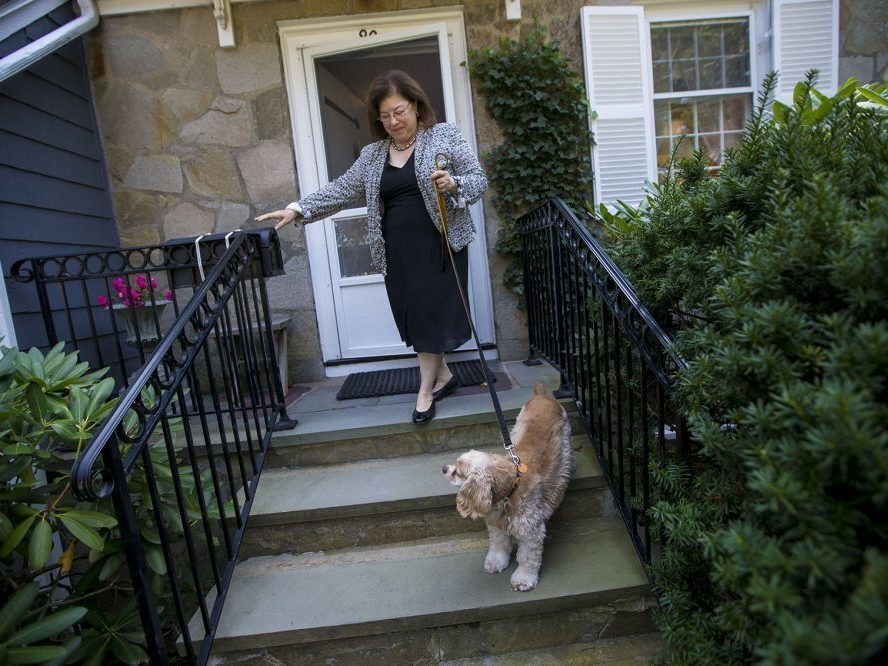 After two weeks of recovery from an addiction to opioids prescribed by her surgeon, Katie Herzog takes a walk with her dog, Pippen.

In April this year, Katie Herzog checked into a Boston teaching hospital for what turned out to be a nine-hour-long back surgery.

The 68-year-old consulting firm president left the hospital with a prescription for Dilaudid, an opioid used to treat severe pain, and instructions to take two pills every four hours as needed. Herzog took close to the full dose for about two weeks.

Then, worried about addiction, she began asking questions. "I said, 'How do I taper off this? I don't want to stay on this drug forever, you know? What do I do?' " Herzog says, recalling conversations with her various providers.

She never got a clear answer.

When none of her providers explained to Herzog how to wean herself off the Dilaudid, she turned to Google. She eventually found a Canadian Medical Association guide to tapering opioids.

"So I started tapering from 28 [milligrams], to 24 to 16," Herzog says, scrolling through a pocket diary with red cardinals on the cover that she used to keep track.

About a month after surgery, she had a follow-up visit with her surgeon. She had reached the end of her self-imposed tapering path the day before and at the doctor's, she recalls feeling quite sick.

"I was teary, I had diarrhea, I was vomiting a lot, I had muscle pains, headache, I had a low-grade fever," Herzog says.

The surgeon thought she had a virus and told her to see her internist. Her internist came to the same conclusion.

She went home and suffered through five days of what she came to realize was acute withdrawal, and two more weeks of fatigue, nausea and diarrhea.

"I had every single symptom in the book," Herzog says. "And there was no recognition by these really professional, senior, seasoned doctors at Boston's finest hospitals that I was going through withdrawal."

Herzog did not name any of the providers who had something to do with her pain management or missed signs of withdrawal. She said she sees this as a system-wide problem. Herzog did share medical records that support her story. After the withdrawal, she did not crave Dilaudid and she manages any lingering pain with Tylenol. She has since returned to her providers, who've acknowledged that she was in withdrawal.

Not an isolated incident

Herzog's story is one doctors are hearing more and more. "We have many clinicians prescribing opioids without any understanding of opioid withdrawal symptoms," says Dr. Andrew Kolodny, director of Physicians for Responsible Opioid Prescribing and co-director of the Opioid Policy Research Collaborative at Brandeis University's Heller School. One reason, Kolodny says, is that doctors don't realize how quickly a patient can become dependent on drugs like Dilaudid.

Sometimes that dependence leads to full-blown addiction. The majority of street drug users say they switched to heroin after prescribed painkillers became too expensive.

Now, a handful of doctors and hospital administrators are asking, if an opioid addiction starts with a prescription after surgery or some other hospital-based care, should the hospital be penalized? As in: Is addiction a medical error along the lines of some hospital-acquired infections?

Writing for the blog and journal Health Affairs, three physician-executives with the Hospital Corporation of America argue for calling it just that.

"It arises during a hospitalization, is a high-cost and high-volume condition, and could reasonably have been prevented through the application of evidence-based guidelines," write Drs. Michael Schlosser, Ravi Chari and Jonathan Perlin.

The authors admit it would be hard for hospitals to monitor all patients given an opioid prescription in the weeks and months after surgery, but they say hospitals need to try.

"Addressing long-term opioid use as a hospital-acquired condition will draw a clear line between appropriate and inappropriate use, and will empower hospitals to develop evidenced-based standards of care for managing post-operative pain adequately while also helping protect the patient from future harm," said Schlosser in an emailed response to questions.

Kolodny said it's an idea worth considering.

"We're in the midst of a severe opioid epidemic, caused by the over-prescribing of opioids," Kolodny says. "Putting hospitals on the hook for the consequences of aggressive opioid prescribing makes sense to me."

But penalizing hospitals for patients who become addicted to opioids conflicts with payments tied to patient satisfaction surveys. Hospitals that do not adequately address patients' pain may lose money for low patient satisfaction scores. In response to the opioid epidemic, patient surveys are shifting from questions like, "Did the hospital staff do everything they could to help you with your pain?" to questions that emphasize talking to patients about their pain. But physicians may still prescribe more, rather than fewer, opioids to avoid retribution from dissatisfied patients.

"This is a real concern that patients who may feel that their pain is under-managed may take that out in these patient report cards," says Dr. Gabriel Brat, a trauma surgeon at Beth Israel Deaconess Medical Center who studies the use of opioids after surgery at Harvard Medical School.

Most patients leave the hospital with more pain meds than they need. Studies show that between 67 and 92 percent of patients have opioid pills left over after common surgical procedures.

One reason that may contribute to over-prescribing is that patients vary a lot. Brat said about 10 percent of patients need intense pain management, while the others, not so much, but it's difficult to identify that 10 percent.

"Many surgeons are still prescribing opioids for the subset of patients that have higher requirements, as opposed to for the majority of patients who are taking a very small percentage of the pills that they are prescribed," Brat explains.

There are no firm guidelines for which opioids to prescribe after surgery, at what dose or for how long. The CDC released opioid prescribing guidelines for chronic pain in 2016, but it included only brief references to acute pain.

Some opioid prescribing guidance for surgeons is emerging. A study published in September reviewed surgical records for 215,140 patients. It found that the optimal opioid prescription following general surgery is between four to nine days.