Accessibility links
How Caring For People With HIV Has Made Health Care Better For All : Shots - Health News AIDS has been transformed from a death sentence into a manageable chronic disease. The holistic approach to care that helped make that possible could transform health care for us all. 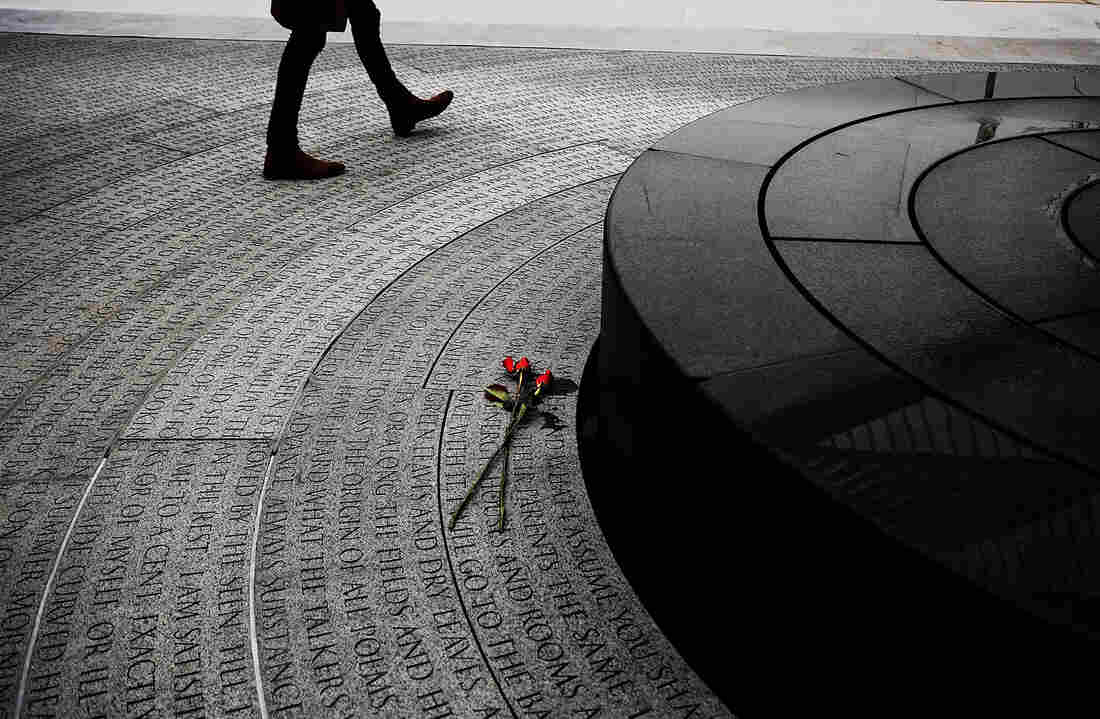 A memorial honoring victims of the AIDS epidemic sits across the street from the former St. Vincent's Hospital site in New York City, where many of the early victims of AIDS were diagnosed. Spencer Platt/Getty Images hide caption 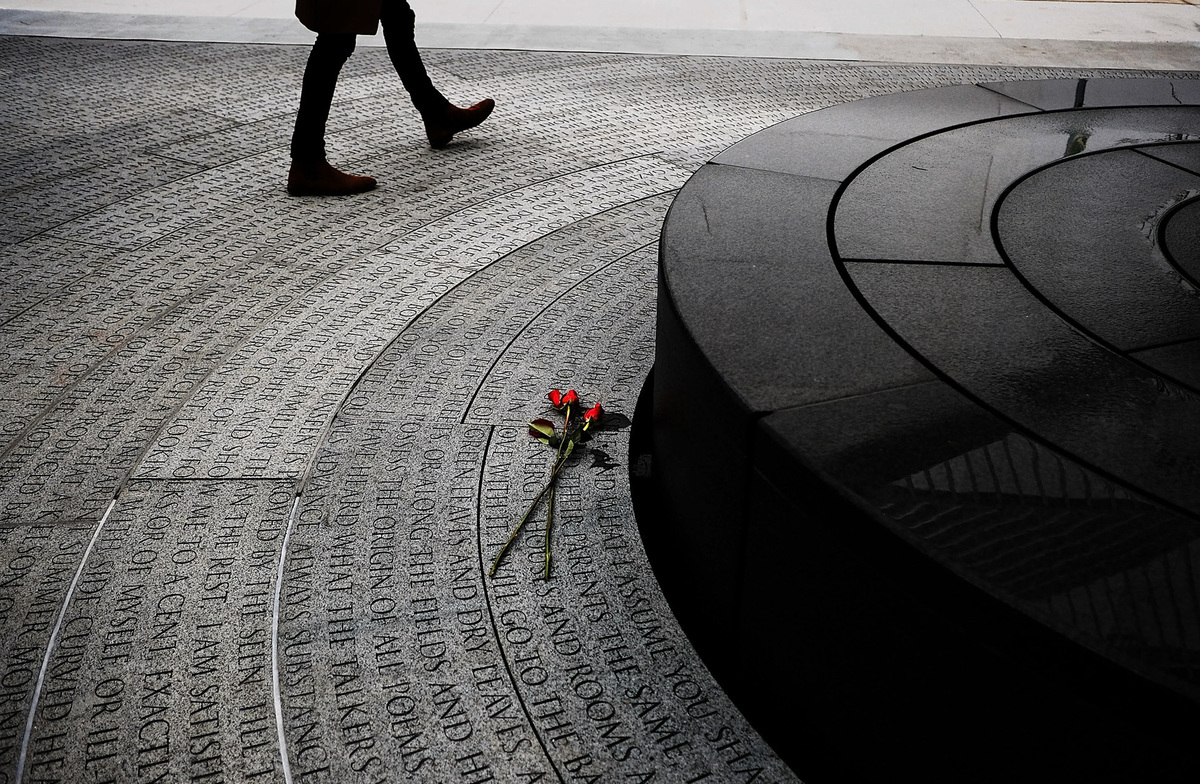 A memorial honoring victims of the AIDS epidemic sits across the street from the former St. Vincent's Hospital site in New York City, where many of the early victims of AIDS were diagnosed.

It's been two decades since we established effective treatment against HIV, rendering what was nearly always a fatal infection to a chronic, manageable condition.

I remember one of the first AIDS patients I met as a medical student in the mid-90s: Harry, a young man losing his sight from an opportunistic infection called CMV retinitis. We had only one drug we could give him to try to stop him from going blind.

Ganciclovir was horrible. Given intravenously, it burned at the infusion site, made him severely nauseous, and caused his already-low blood count to fall. On top of all that, it didn't work very well.

Days after we discharged him from the hospital, Harry was readmitted with pneumonia caused by Pneumocystis and died. He was 32 years old.

In those years, we saw many patients in the hospital with complications from HIV. They had unusual malignancies like Kaposi's sarcoma, and other opportunistic infections like toxoplasmosis that we never see in patients with intact immune systems.

In extreme cases, patients simply wasted away, physically and mentally, from AIDS.

Then protease inhibitors were introduced in 1996, and almost overnight the death rate from AIDS plummeted. Now people could live with HIV rather than die from it. Patients with AIDS disappeared from our teaching hospital wards. HIV had become an "outpatient problem."

Antiretroviral therapy keeps the viral load suppressed in patients infected with HIV. This means not only that they stay healthy, but also are much less likely to transmit the virus to others.

Fortunately, the cocktail of three different medications taken to keep HIV in check, which include a protease inhibitor like darunavir and the newer integrase inhibitors like dolutegravir, have become better tolerated over the years. Today the life expectancy for someone who is HIV-positive is about the same as for someone without HIV — as long as they are able to stay on their medication. 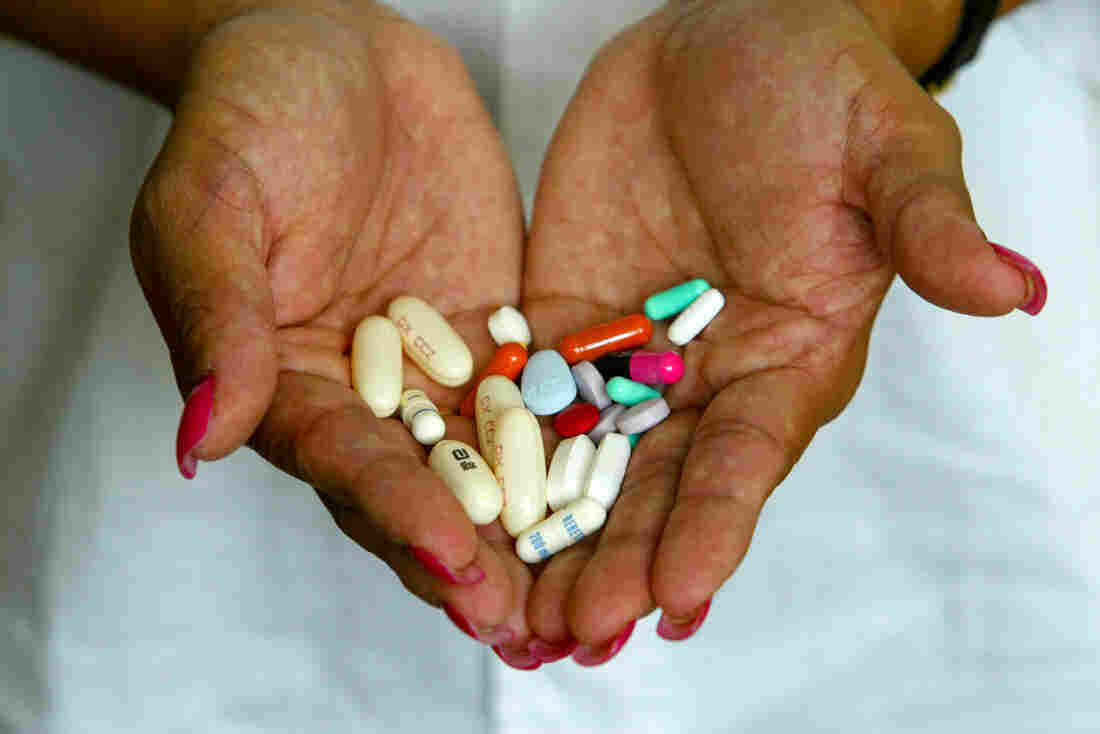 A woman holds the 14 different AIDS medications that she takes three times a day. Antiretroviral drugs have turned HIV from a death sentence into a chronic illness. Joe Raedle/Getty Images hide caption 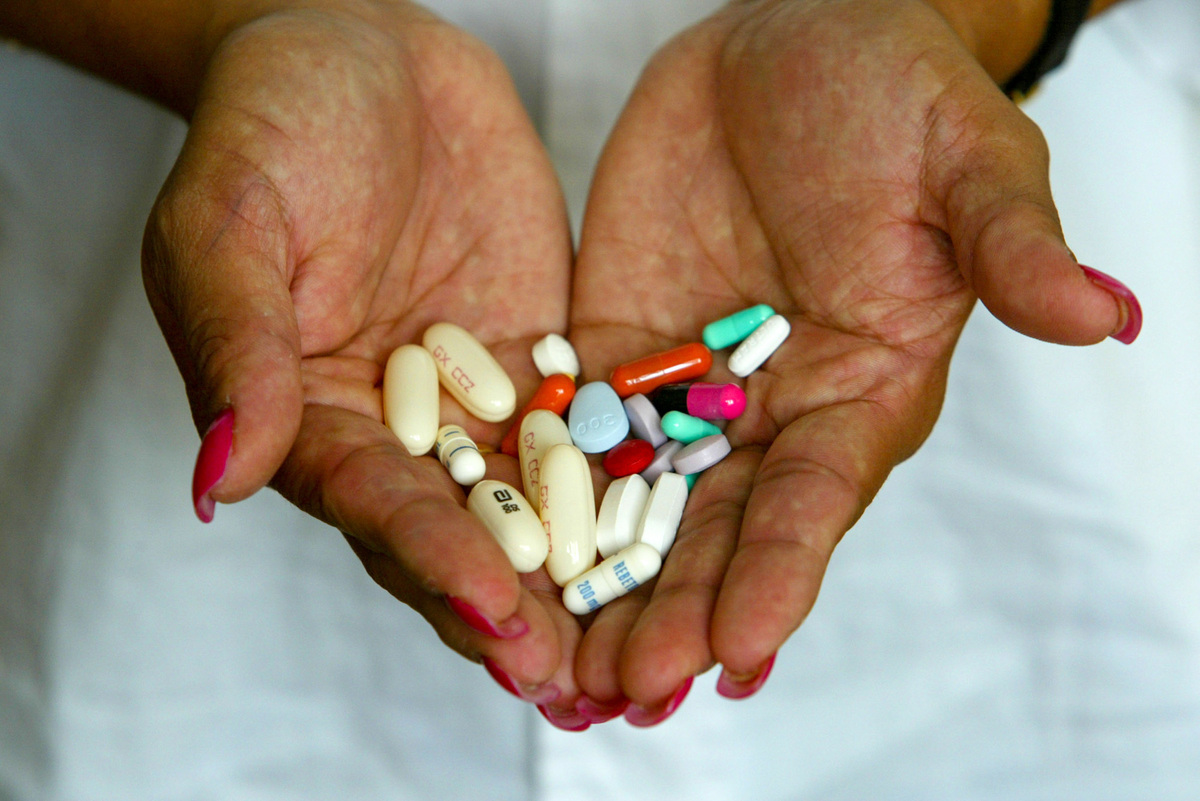 A woman holds the 14 different AIDS medications that she takes three times a day. Antiretroviral drugs have turned HIV from a death sentence into a chronic illness.

For many, though, there are still significant barriers to care that make the not-so-simple act of adhering to a medication regimen near impossible.

Chief among them is access to care. Especially in rural areas, it remains difficult to find practitioners up to date with the latest information in HIV care. In addition, stigma associated with HIV diagnosis and treatment continues to be a formidable barrier to getting care, regardless of location.

Carmel was a patient I cared for years after Harry. She'd been abused as a youngster, which understandably put her in a dark place emotionally. She was isolated from her family, and struggled with drug addiction over the years.

Her HIV eventually progressed to full-blown AIDS because of many fits and starts with her antiretroviral treatment. When I met her, she'd lost her ability to walk due to an opportunistic infection called cryptococcal meningitis.

After three years with numerous hospital admissions, Carmel died. To me, it seemed especially tragic because I knew we had the medical tools to nurse her toward health. But we were unable to cross the psychosocial chasm that Carmel lived beyond to effectively engage her in care.

Even with effective medications, only half of the 1.1 million Americans living with HIV have an undetectable viral load. But this represents progress, as does the fact that 85 percent of Americans infected with HIV are aware of their status, according to the Centers for Disease Control and Prevention.

These are all-time highs, but show that there is still work to be done.

It's worth remembering that strong, sometimes militant advocacy is what pushed us forward in how we diagnose and treat HIV. Scientific, medical, and social progress occurred more rapidly with HIV than with any other condition before it. 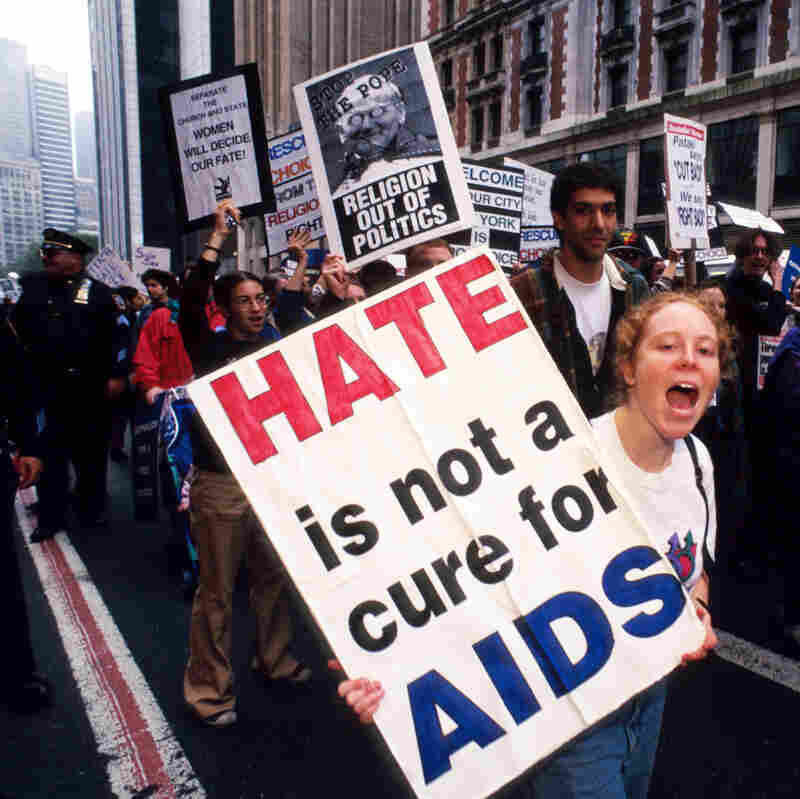 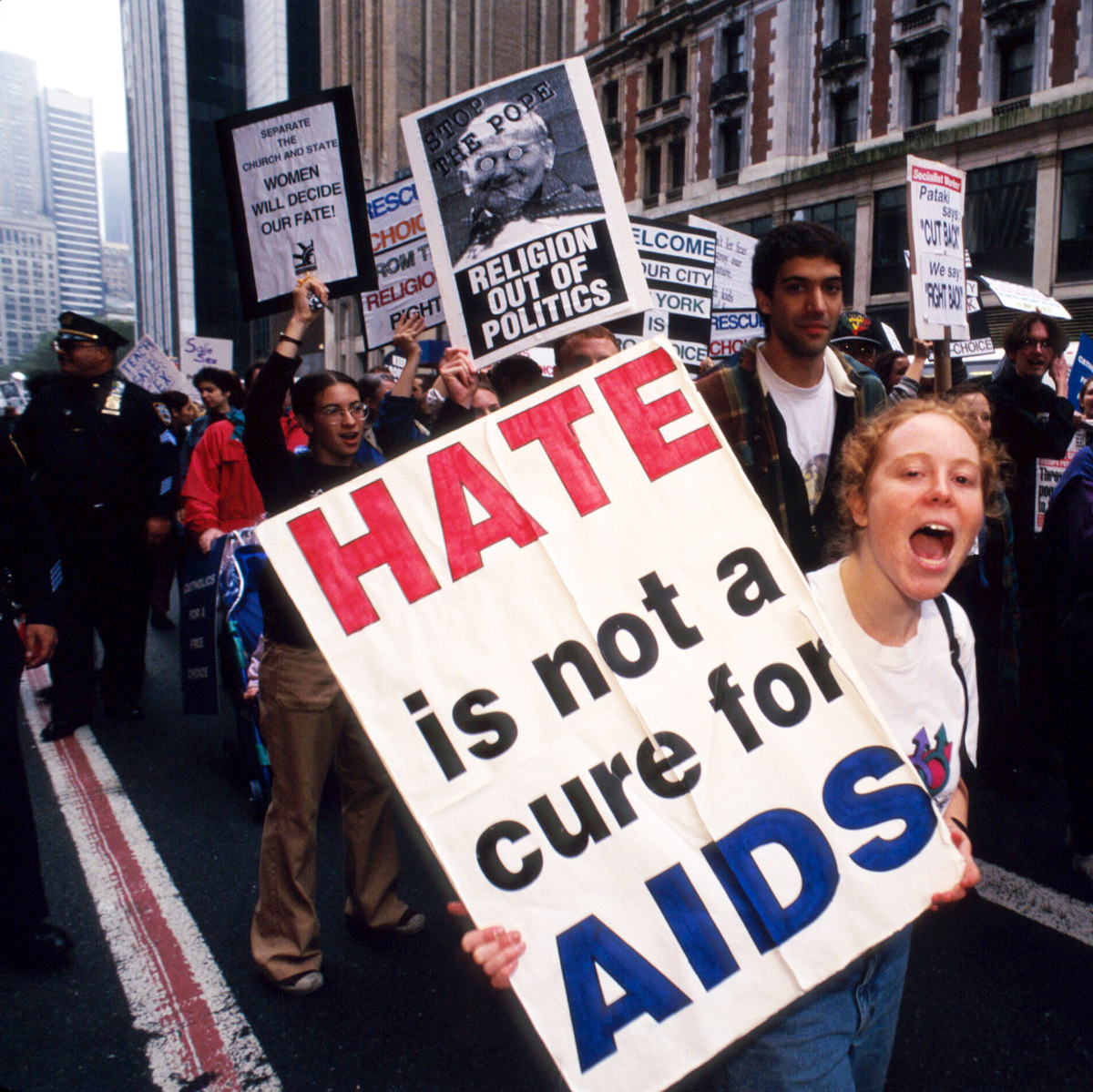 Protestors carry signs at a rally in New York City on October 7, 1995 in New York City. Activists played a key role in speeding research that developed treatments for HIV.

AIDS activism pushed the research agenda forward, and brought truly holistic care to people diagnosed with HIV. The care model we use for HIV-positive persons is an ideal model for how we could care for everyone—thinking not just about the medical aspects per se, but also about nutrition, medication adherence, transportation, mental health and overall wellbeing.

In Oklahoma, where I practice, the stigma surrounding HIV is still palpable. Fortunately, an organization called Tulsa Cares has blossomed to provide case management and psychosocial and nutritional support to people with HIV and their loved ones. This vastly increases the likelihood that patients will get into treatment and stay with it.

Advocacy for HIV is what led to the dramatic improvements in our ability to care for the illness. On this 30th anniversary of World AIDS Day, let's remember what a difference holistic care has made for people with HIV and how amazing it would be if such a model spread to all corners of health care.