Accessibility links
Probiotics Get A Hard Look By Scientists : Shots - Health News Many marketing claims about the potential benefits of probiotics have raced ahead of the science, say researchers who are now trying to catch up. One NIH study is investigating kids' gut microbes.

Editor's note, Jan. 17: Some identifying information has been removed from this report to guard the privacy of the family that is part of the probiotics test.

It's a typical hectic morning at Michele's house in Northern Virginia when she gets a knock on her front door.

"Hi, how are you?" she says as she greets Keisha Herbin Smith, a research assistant at Georgetown University. "Come on in."

"Which one isn't feeling good?" asks Herbin Smith, glancing at Michele's children. "That one," she says, pointing to her 8-year-old son, Jackson.

Jackson has an ear infection. So he just started 10 days of antibiotics to kill the strain of bacteria giving him an earache. That's why Herbin Smith is here.

"What time did he take his antibiotic?" Herbin Smith asks.

She asks because the antibiotics won't just wipe out the bad bacteria. They could also disrupt the good bacteria in Jackson's body, which can lead to stomach problems, including severe diarrhea.

Herbin Smith had rushed to the family home to deliver a special yogurt drink that scientists are testing in hopes of preventing those serious problems.

"We want him to take the first yogurt within 24 hours of taking his first antibiotic," she says.

The yogurt contains a probiotic — a living strain of bacteria that researchers think could help prevent diarrhea and other complications of the antibiotic.

Some previous research has hinted that probiotics could help, and some doctors already are recommending probiotics to parents of children taking antibiotics.

But researchers hope the new yogurt study will provide clearer evidence as to whether that's a good idea. It's the first large, carefully designed test of a probiotic to get reviewed by the Food and Drug Administration, says Dr. Daniel Merenstein, the director of research programs in the department of family medicine at Georgetown University, who is leading the study.

"The problem with a lot of probiotic research is that they haven't always been the best of studies," Merenstein says. "Many are done by industry. Many were done in other countries. We're looking to see if it actually prevents diarrhea in kids." 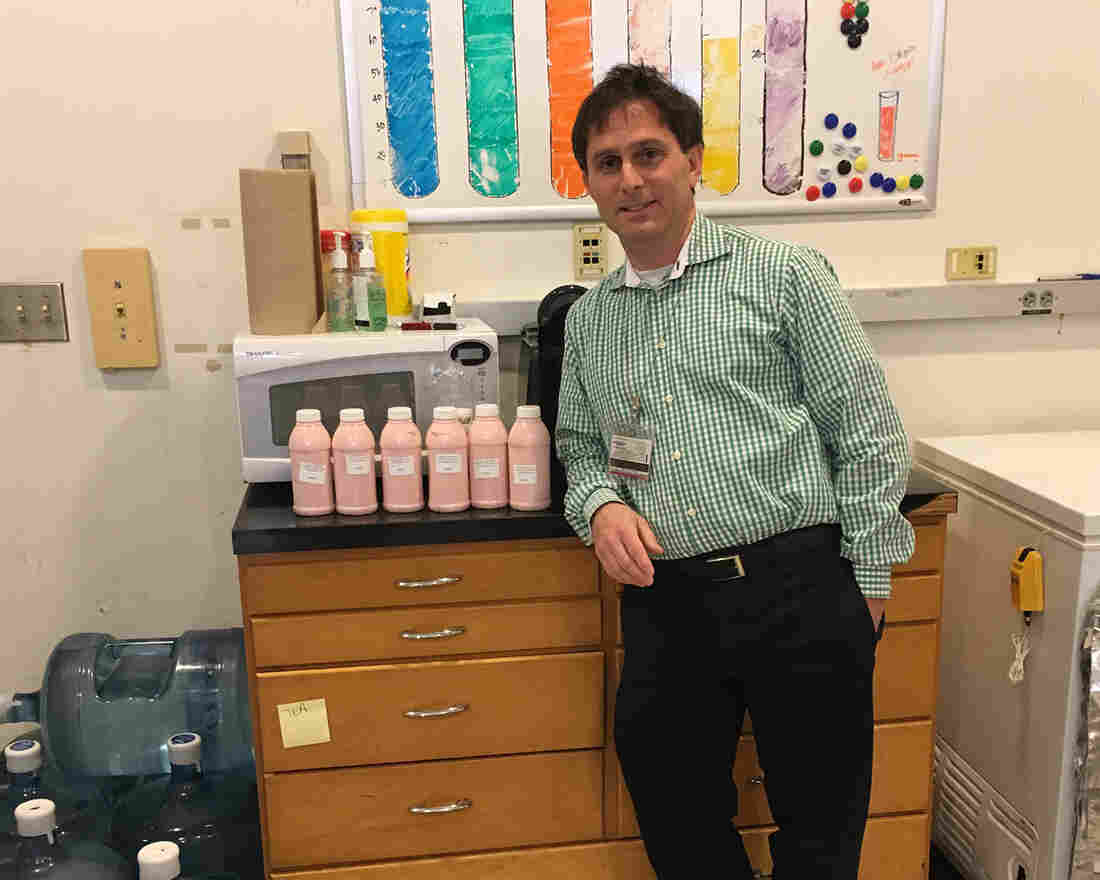 Dr. Daniel Merenstein, a family medicine physician at Georgetown University, with bottles of a probiotic-laced strawberry yogurt drink that he is testing for its effect on children's health. Rob Stein/NPR hide caption 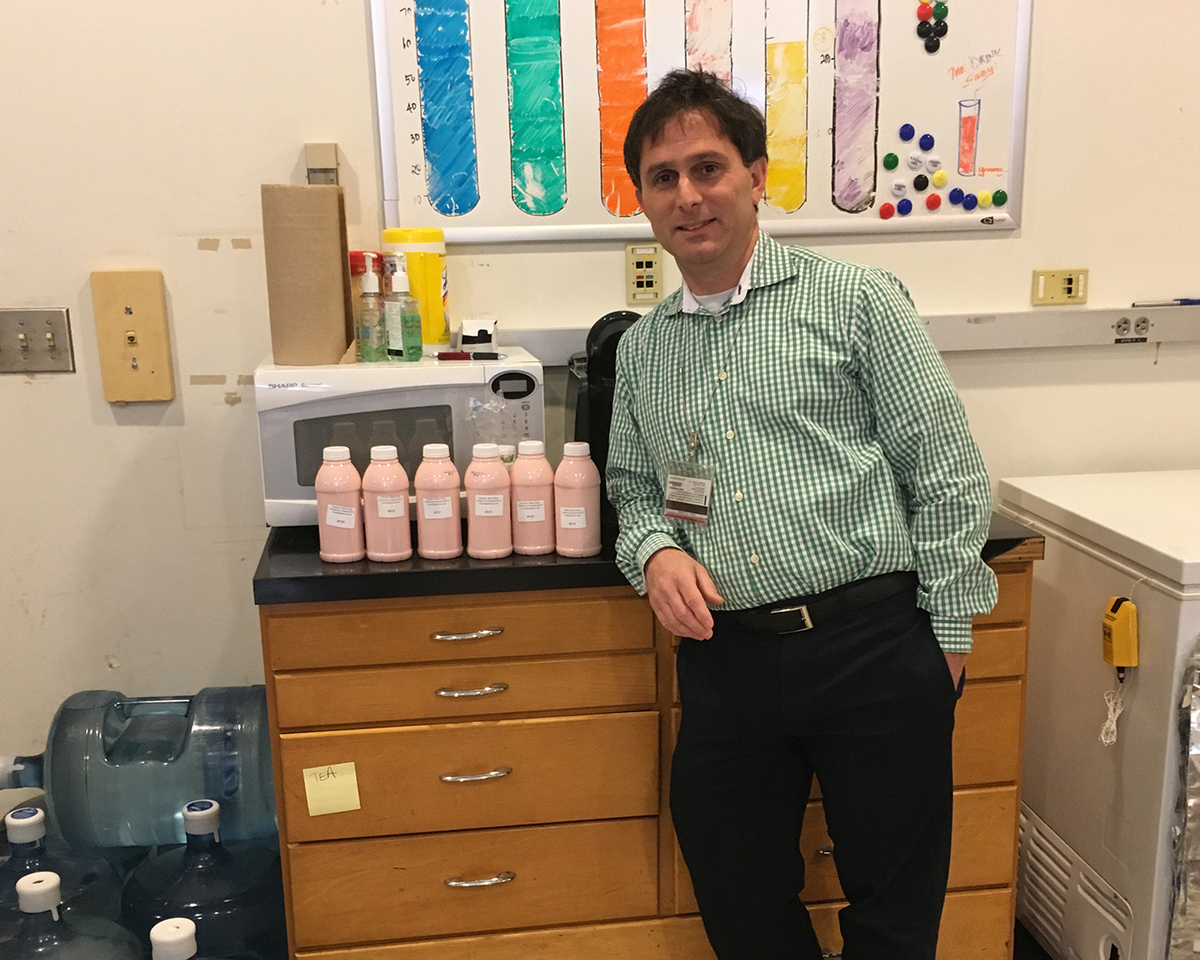 Dr. Daniel Merenstein, a family medicine physician at Georgetown University, with bottles of a probiotic-laced strawberry yogurt drink that he is testing for its effect on children's health.

Merenstein's study is part of an explosion of interest in research on the microbiome — the billions of friendly bacteria, yeast and other microorganisms that live in the human body. There's mounting evidence these microbes play important roles in human health.

In addition to helping prevent diarrhea in children taking antibiotics, there is some evidence that probiotics could help prevent complications from antibiotics in adults as well and might help prevent gastrointestinal infections that sometimes occur when people travel to other countries. Other people have suggested probiotics might help treat vaginal infections in women, or possibly alleviate colic in infants or perhaps prevent eczema in some babies. Probiotics are also being looked at as a possibility to prevent a serious condition in newborn babies — necrotizing enterocolitis.

Some researchers even argue there's enough evidence to recommend that healthy adults take a probiotic regularly to help maintain their health.

"I think there's a generic benefit in ingesting high numbers of safe, live bacteria every day," says Colin Hill, a professor of microbiology at University College Cork in Ireland. "If I had my way, there would be a recommended daily allowance of bacteria."

But many scientists question whether there's enough evidence to support that suggestion or the many claims some companies are making about the alleged benefits of probiotics. Some products are being promoted to help prevent obesity, heart disease and even alleviate mental health conditions such as anxiety and depression.

"The marketing of every claim under the sun with every product under the sun is definitely questionable," says Linda Duffy, a program director at the National Center for Complementary and Integrative Health. "There's not much in the way of a magic bullet anywhere."

The net benefit of probiotic use with certain conditions "is looking very, very promising," she says. But there are still a lot of unanswered questions.

While probiotics are probably safe for most otherwise healthy people, Duffy and others note that the products could pose some risk for people with weakened immune systems, such as those infected with the AIDS virus or for people undergoing cancer chemotherapy.

Another caution is that probiotics are not regulated as closely as prescription and over-the-counter medications. So there's no guarantee that what's on the label is actually in the bottle — or that whatever organisms were originally in the bottle are still alive. There are also concerns about potentially dangerous contaminants in products that could pose a risk even to healthy people.

"Are there contaminants out there? Are there adulterated products? Are there marketed products without the appropriate claims? Absolutely," Duffy says. "Like anything, you have to be a wise consumer."

For his part, Merenstein hopes his study will provide strong new evidence that probiotics provide benefits for children taking antibiotics.

In the study, 300 children will drink specially made strawberry yogurt. Half will drink yogurt that contains a probiotic called bifidobacteria. The researchers will then compare the incidence of diarrhea and other gastrointestinal problems in the two groups of kids.

In addition, the researchers are gathering fecal samples from the children to try to determine exactly how probiotics might work.

"One of our goals is to show that taking a probiotic will get your microbiome back to what it was before you started the antibiotic — and/or protect you from the changes," Merenstein says.

So, back at Michele's house, Jackson takes his first gulp of Merenstein's special yogurt.

"All right, here you go — you can drink it right out of here," Michele says as she takes a bottle out of the refrigerator, opens the cap and hands it to her son.

"Yeah," says Jackson, as he gulps down the yogurt and declares: "Done!"

It will take years for Merenstein's team to gather and analyze the results of the study. So it will be a while before they can say for sure whether this particular probiotic treatment works.