Accessibility links
For Natives Americans, In Indian Health Service And Outside It : Shots - Health News About a quarter of Native Americans report experiencing discrimination in health care, according to a poll by NPR, the Robert Wood Johnson Foundation and the Harvard T.H. Chan School of Public Health. 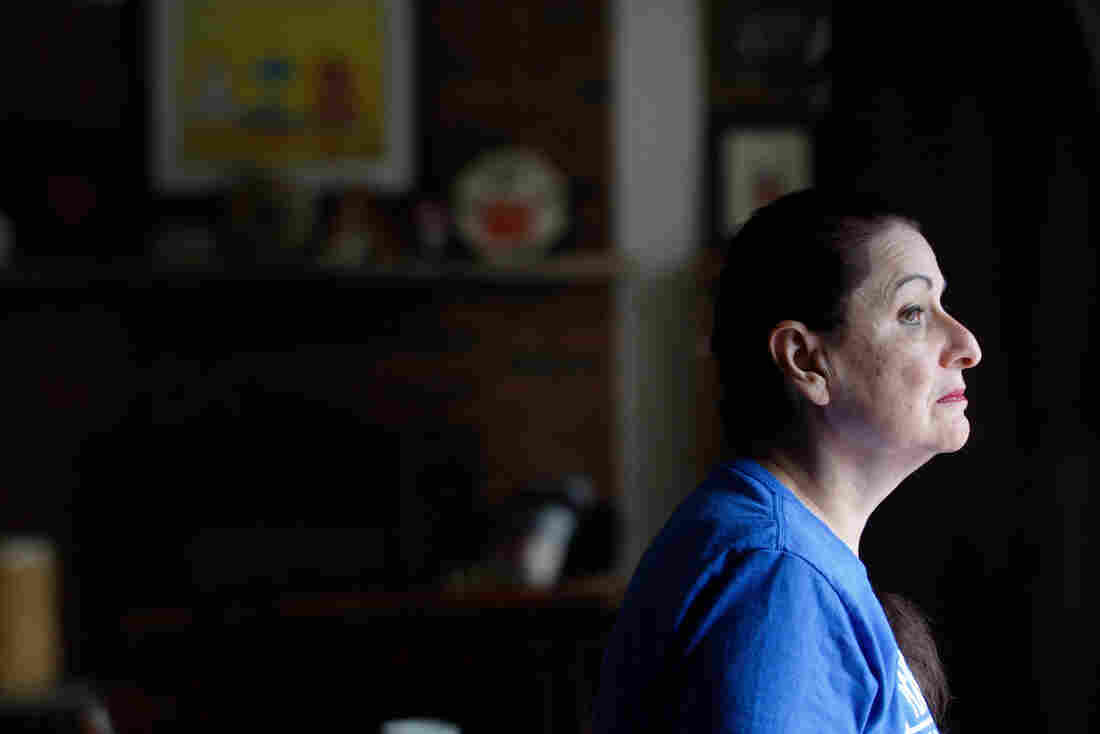 Anna Whiting Sorrell, a member of the Confederated Salish and Kootenai Tribes in northwest Montana, had hernia surgery a couple of years ago. The Indian Health Service picked up a part of the tab for the surgery but denied coverage for follow-up appointments. Mike Albans for NPR hide caption 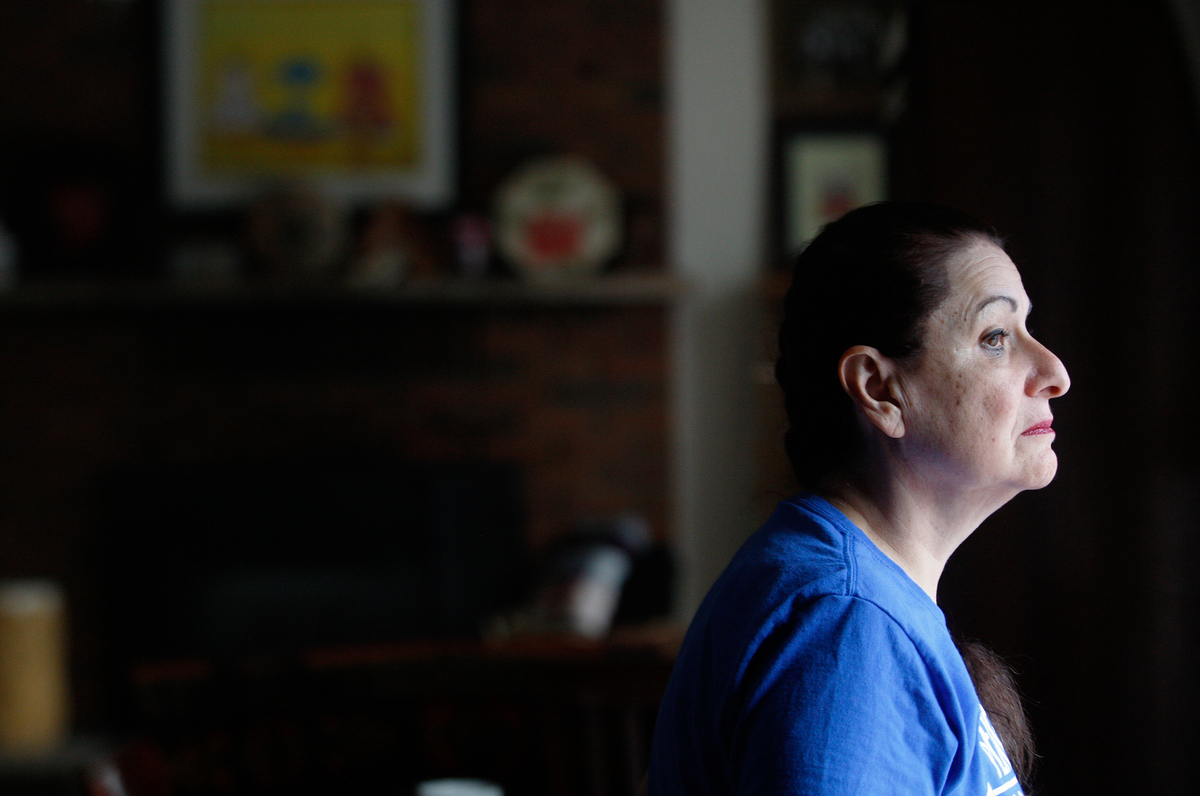 Anna Whiting Sorrell, a member of the Confederated Salish and Kootenai Tribes in northwest Montana, had hernia surgery a couple of years ago. The Indian Health Service picked up a part of the tab for the surgery but denied coverage for follow-up appointments.

The life expectancy of Native Americans in some states is 20 years shorter than the national average.

There are many reasons why.

Among them, health programs for American Indians are chronically underfunded by Congress. And, about a quarter of Native Americans reported experiencing discrimination when going to a doctor or health clinic, according to findings of a poll by NPR, the Robert Wood Johnson Foundation and Harvard T.H. Chan School of Public Health.

Margaret Moss, a member of the Hidatsa tribe, has worked as a nurse for the Indian Health Service and in other systems. She now teaches nursing at the University of Buffalo.

She says she has seen racism toward Native Americans in health care facilities where she's worked, and as a mom trying to get proper care for her son.

Once, when she was on a health policy fellowship with a U.S. Senate committee, Moss' son had a broken arm improperly set at a non-IHS health facility in Washington, D.C.

She asked the physician about options to correct it, but he told her it was fine, she said. "Even when I, as an educated person using the right words, was saying what needed to happen, [he] didn't want to do anything for us, even though we had a [health insurance] card."

Moss then reluctantly pulled out a business card with the Senate logo, she recalled, and was instantly transformed in the doctor's eyes from "this American Indian woman with my obviously minority son" to someone he could not afford to dismiss.

"It wasn't until the person ... felt they could get in trouble for this ... then the person did something," said Moss. "I felt like it was racism. Not everybody has a card they can just whip out."

She says she feels discrimination is more overt, "in areas where American Indians are known about," like the Dakotas and parts of the American Southwest, but also exists in places without big tribal populations.

In places where there are few American Indians, Moss says, "people don't expect to see American Indians; they think they are from days gone by, and so you are misidentified. And that's another form of discrimination."

Health care systems outside the Indian Health Service generally see very few Native American patients, because it's so hard for American Indians to access care in the private sector. A lot of that has to do with high poverty and uninsured rates among American Indians, who also often live in rural areas with few health care providers.

"The strikes against people trying to get care are huge: geographic, transportation, monetary," Moss says.

A persistent myth inside and outside Indian Country is that Native Americans get free health care from the federal government.

"I hear that all the time," says Moss, sighing. 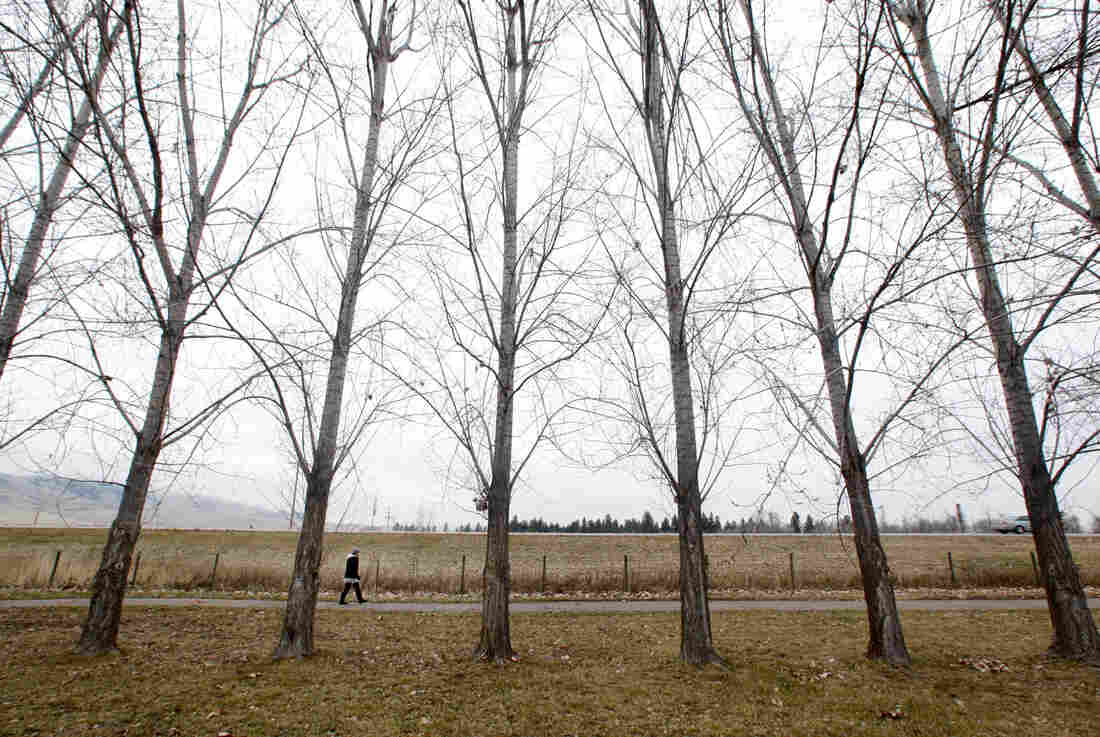 Sorrell started exercising and going on walks after her experience with hernia surgery. Mike Albans for NPR hide caption 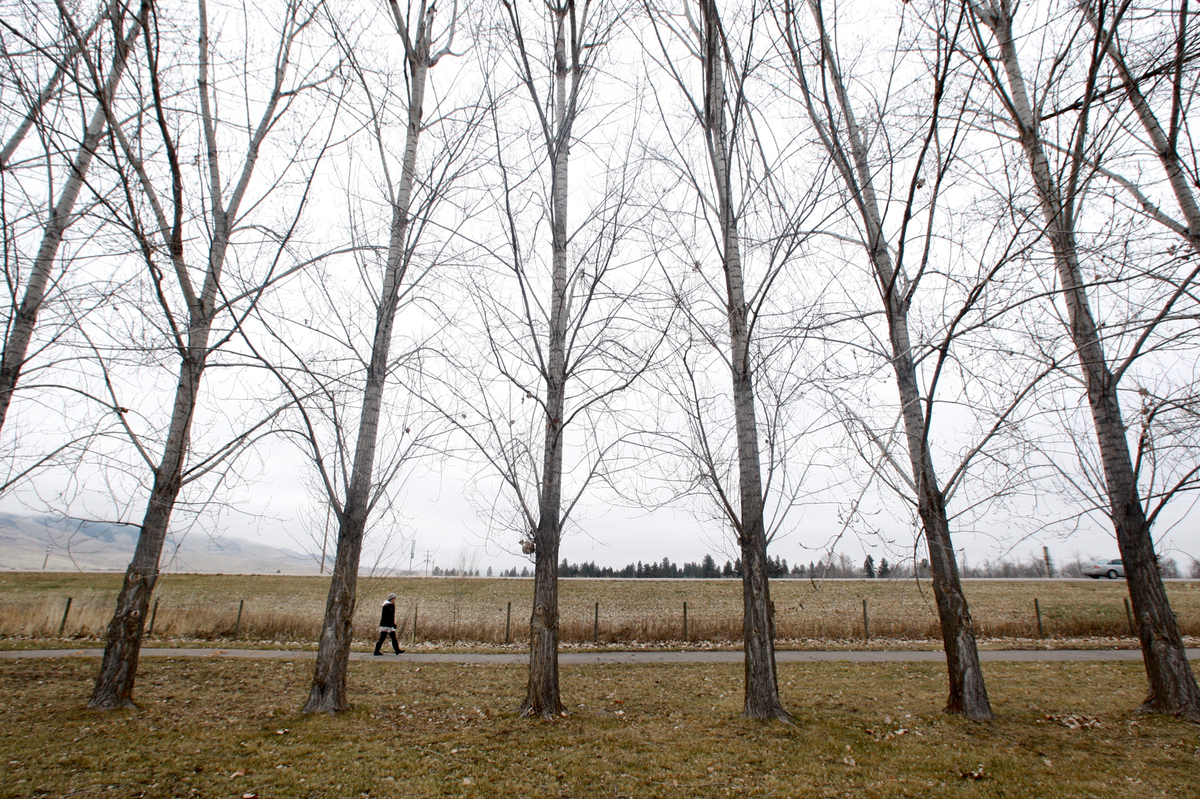 Sorrell started exercising and going on walks after her experience with hernia surgery.

The federal government promised to take care of Native Americans' health when it signed the treaties in which tribes gave up almost all of their land.

"Unfortunately, they have not kept up their end of the bargain," Moss says.

Congress has long failed to allocate enough money to meet Native American health needs. In 2016 it set the Indian Health Service budget at $4.8 billion. Spread across the US population of 3.7 million American Indians and Alaska Natives, that's $1,297 per person. That compares to $6,973 per inmate in the federal prison system.

Moss says the IHS can be less an aid to people than another bureaucratic barrier. "It is highly complicated," Moss says, "even if you took out the racism, perceived or real."

The IHS isn't insurance. It's more like the Veterans Administration, running clinics and hospitals where its members can get care. But the IHS is far smaller than the VA.

Federal funding is also supposed to pay for care in the private sector that IHS hospitals can't provide. But, quoting a sardonic joke familiar to many in Indian Country, Moss says it's well known that "you'd better get sick by June, because there won't be any more money, or it's life and limb only, those are the things that would be authorized."

Anna Whiting Sorrell, a member of the Confederated Salish and Kootenai Tribes in northwest Montana experienced that firsthand. The IHS picked up part of the tab for her hernia surgery at a hospital outside of the IHS a couple of years ago, but when it was time to schedule follow-up appointments, Sorrell was out of luck.

"It got denied. My follow-up got denied," Sorrell says. "[The hospital] didn't even ask if I was willing to pay," she says, and that felt like discrimination. "They would assume that other non-Indians would pay for it themselves, why do we as Indian people not get to make those decisions ourselves?" Sorrell asks.

She felt like she was falling through a crack in the health care system at a particularly poignant time. 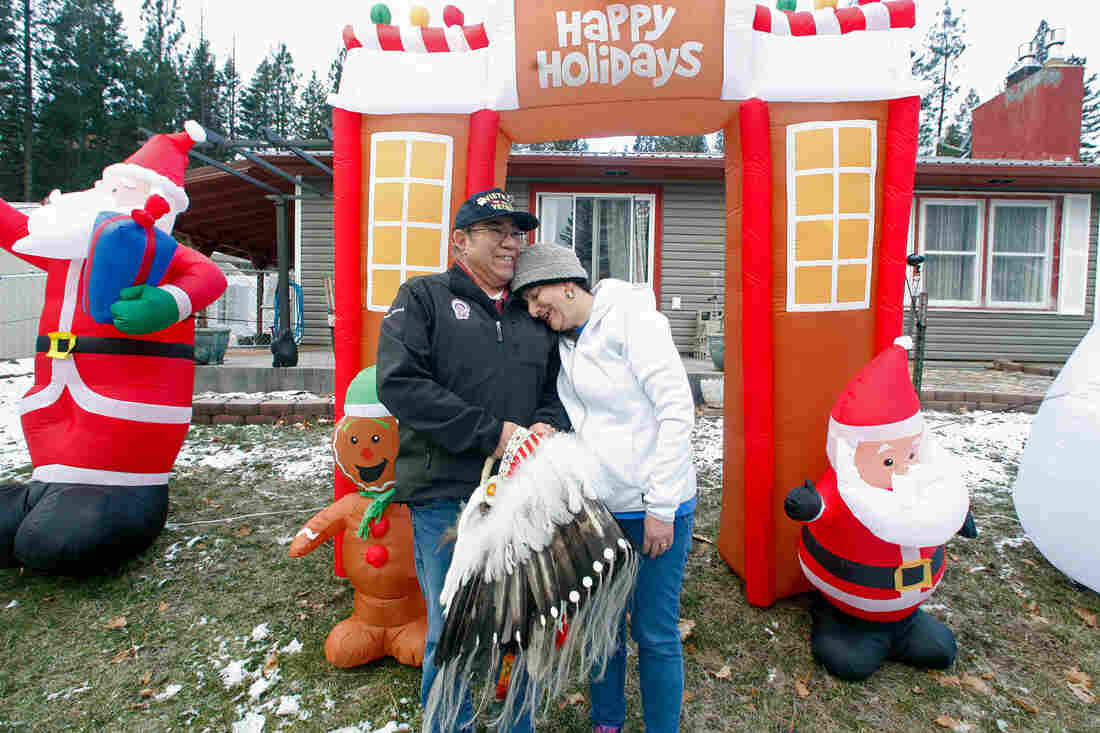 Anna and her husband, Gene Sorrell, outside their home in Evaro, Mont. Anna eventually received follow-up care for her surgery, but the process took years. Mike Albans for NPR hide caption 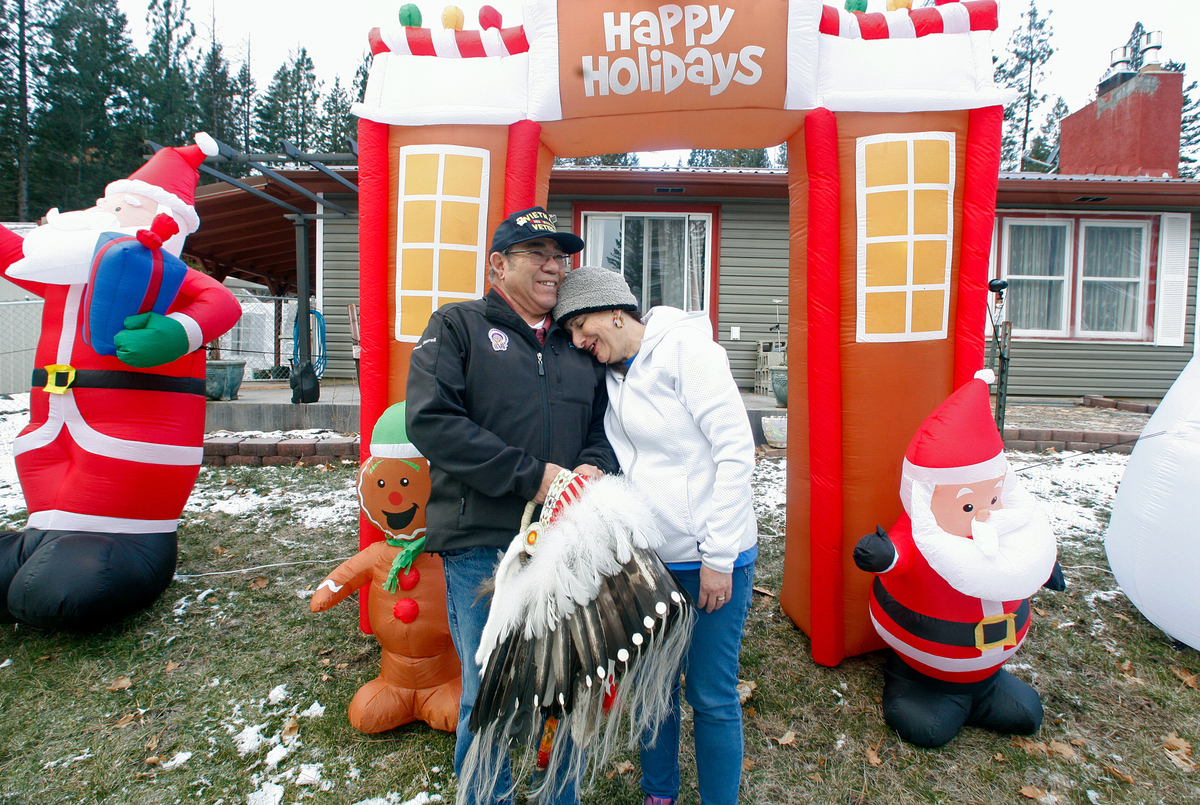 Anna and her husband, Gene Sorrell, outside their home in Evaro, Mont. Anna eventually received follow-up care for her surgery, but the process took years.

With help from her tribe, Sorrell eventually got her follow-up care, but her journey from diagnosis to actually getting surgery took years, and the University of Buffalo's Margaret Moss says a lot of Native Americans just give up.

"That is the idea out there in Indian Country ... , 'I'm not even going to try, because it's not going to happen.' Or they hear so many stories of people who did try, and it didn't happen," Moss says.

That means a lot of American Indians simply put up with what she calls, "tolerated illness.

"They say they're fine, but they're not," Moss says, and their health problems often progress until it's too late for treatment to help.

Anna Whiting Sorrell, a health care administrator for her tribes, says she is optimistic that the Affordable Care Act will make a big difference for Native Americans. It gives lower-income people access to affordable insurance coverage outside the IHS. Many Natives Americans who weren't eligible for Medicaid before the ACA now are, too.

Moss is more skeptical that the ACA will make a big difference, in part because of entrenched institutional discrimination toward Native Americans in healthcare.

"Until attitudes change," Moss says, "we're still going to be in a sad situation."

Our ongoing series "You, Me and Them: Experiencing Discrimination in America" is based in part on a poll by NPR, the Robert Wood Johnson Foundation and the Harvard T.H. Chan School of Public Health. We have previously released results for African-Americans, Latinos, Asian-Americans, whites and women.