Accessibility links
A Father And Son Share A Difficult Diagnosis Of Dystonia : Shots - Health News Bit by bit, dystonia was stealing Carl Luepker's ability to use his hands and talk. But his biggest fear was that his children would inherit the disorder. Then he saw his son Liam's foot twitch. 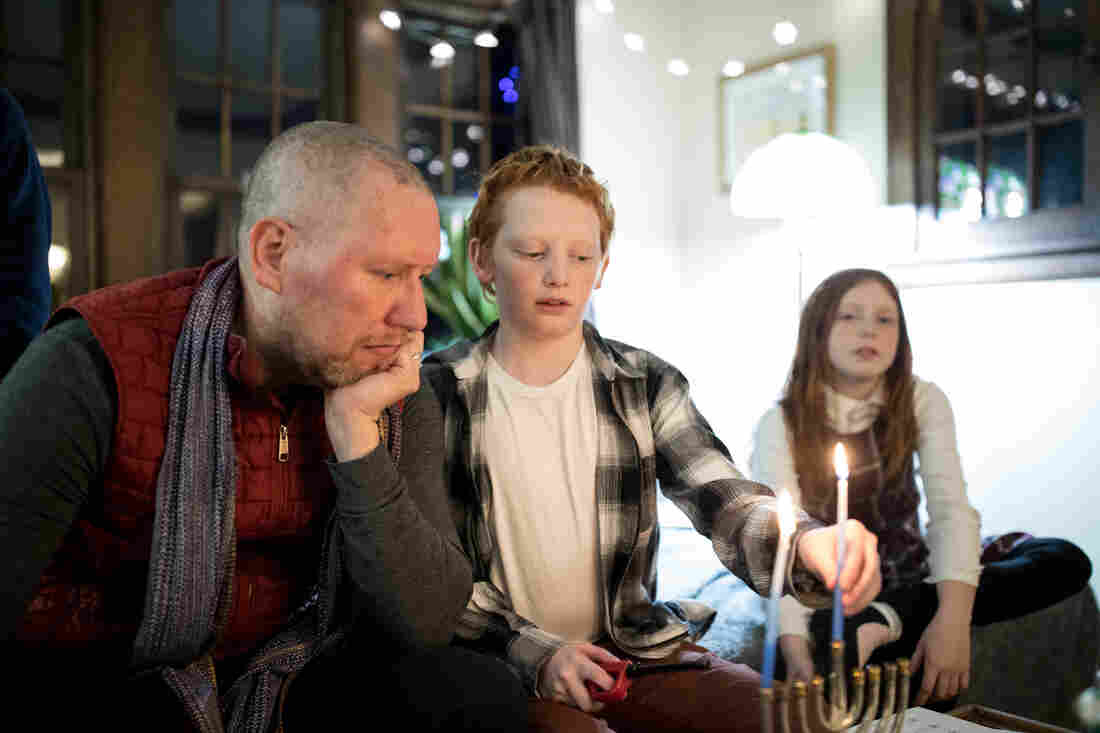 Carl Luepker, his son Liam, 12, and daughter Lucia, 11, light the menorah during Hanukkah in their home in Minneapolis, Minn. Carl and Liam both have a degenerative nerve disorder called dystonia. Jenn Ackerman for NPR hide caption 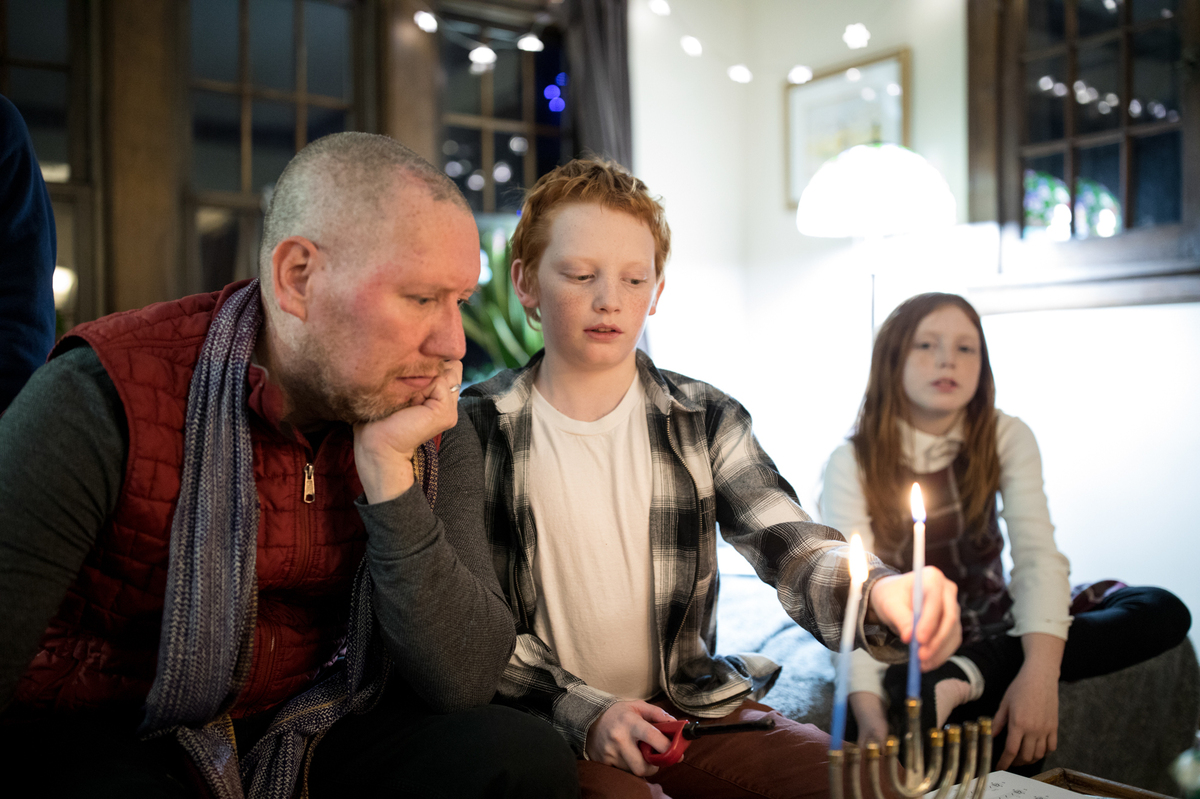 Carl Luepker, his son Liam, 12, and daughter Lucia, 11, light the menorah during Hanukkah in their home in Minneapolis, Minn. Carl and Liam both have a degenerative nerve disorder called dystonia.

Carl Luepker was 10 years old when he first noticed his right hand twitching slightly when he played piano. It was like it had a mind of his own.

When he was 12, doctors diagnosed him with a degenerative nerve disease called dystonia. The disorder causes nerves in the brain to misfire, causing uncontrolled muscle spasms that get worse over time.

Father Undergoes Deep Brain Stimulation To Help Himself And His Son

Father Undergoes Deep Brain Stimulation To Help Himself And His Son

By the time I met Carl in college in 1991, his hand spasms had gotten bad enough that he couldn't play piano at all. But he kept it pretty well hidden. He was the kind of guy who led a mock rock band called Cheshire Cat. I remember him straddling the mic stand and singing "Foxy Lady," his wide grin framed by flailing red hair.

But the dystonia kept spreading and eventually started to affect his speech. "I started to sound more and more like Chewbacca," he says.

He can joke about it, but it's been very painful. Now, at age 45, he's not the extrovert and life of the party that he once was. He tries to speak and his mouth and jaws clench and spasm. Still, Carl has powered through life. He became a sixth-grade school teacher. He found ways to adapt, like using an interactive whiteboard to communicate with his students. "I never wanted to be considered disabled," he says.

After he was married, Carl, who lives in Minneapolis, Minn., was getting a physical and contemplated getting a blood test to find out the cause of his dystonia. He and his wife, Heather, wanted kids. If Carl's dystonia was genetic, he could pass it on to his daughter or son. "Heather turned to me and said, 'Whatever he has, we're gonna love him just the same,' " he says.

So they never got the gene test and had two children, Liam and Lucia. Still, Carl worried. "I'd always looked for it in my kids. I looked for signs. It was my worst fear," he says.

When Liam was 10 years old, Carl noticed his hand cramping during violin lessons. Then he tripped going up the stairs. Carl was sure he saw his foot twitch under him.

Carl took Liam to a neurologist. "I had to intervene during his examination and say doctor, let's have him walk on his toes, and he couldn't," he says.

Liam remembers the day he was told he also had dystonia. "I kind of knew what was gonna happen, but it still shocked me," he says now, at age 12. "I was just overcome, not with fear but anxiety. I had so many questions. What will happen to my kids? What are the chances of it getting worse? All these thoughts poured into my mind the instant the doctor said what he said."

Since Liam's dystonia started in his foot, it's very possible he could end up unable to walk. "It hit me hard," Carl says. "Do I feel shame that he inherited this? Of course." 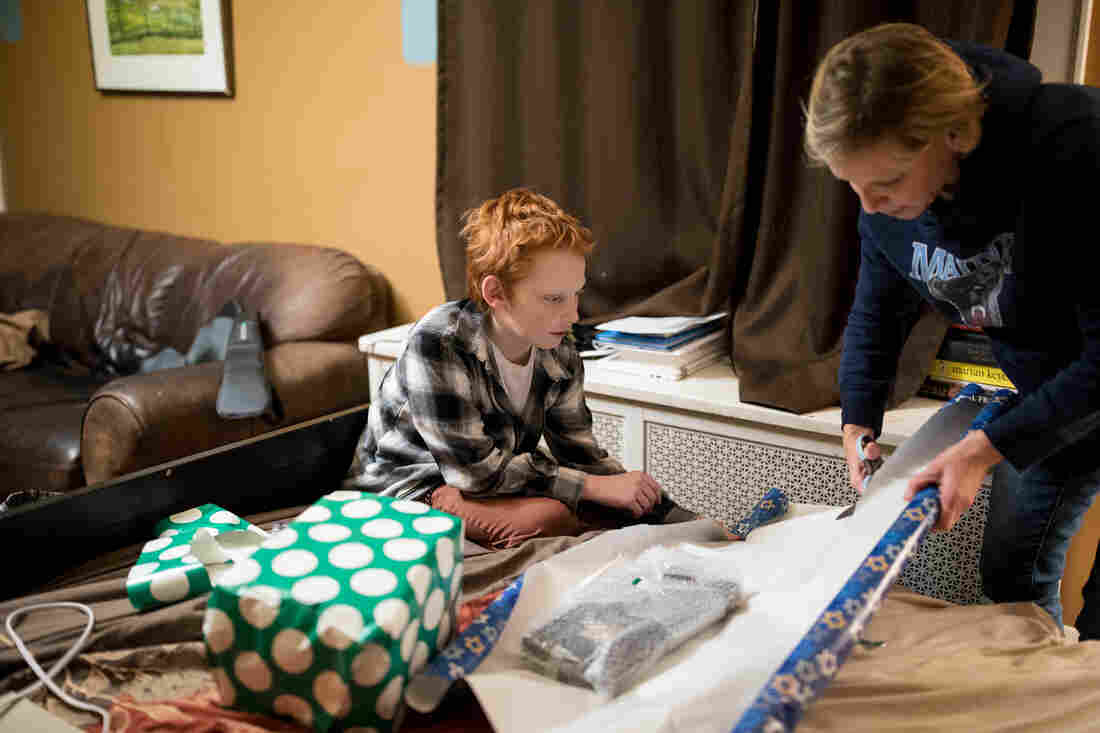 Liam and his mother Heather Leupker wrap gifts. Liam decided to get brain surgery to treat dystonia after his father had the procedure. Jenn Ackerman for NPR hide caption 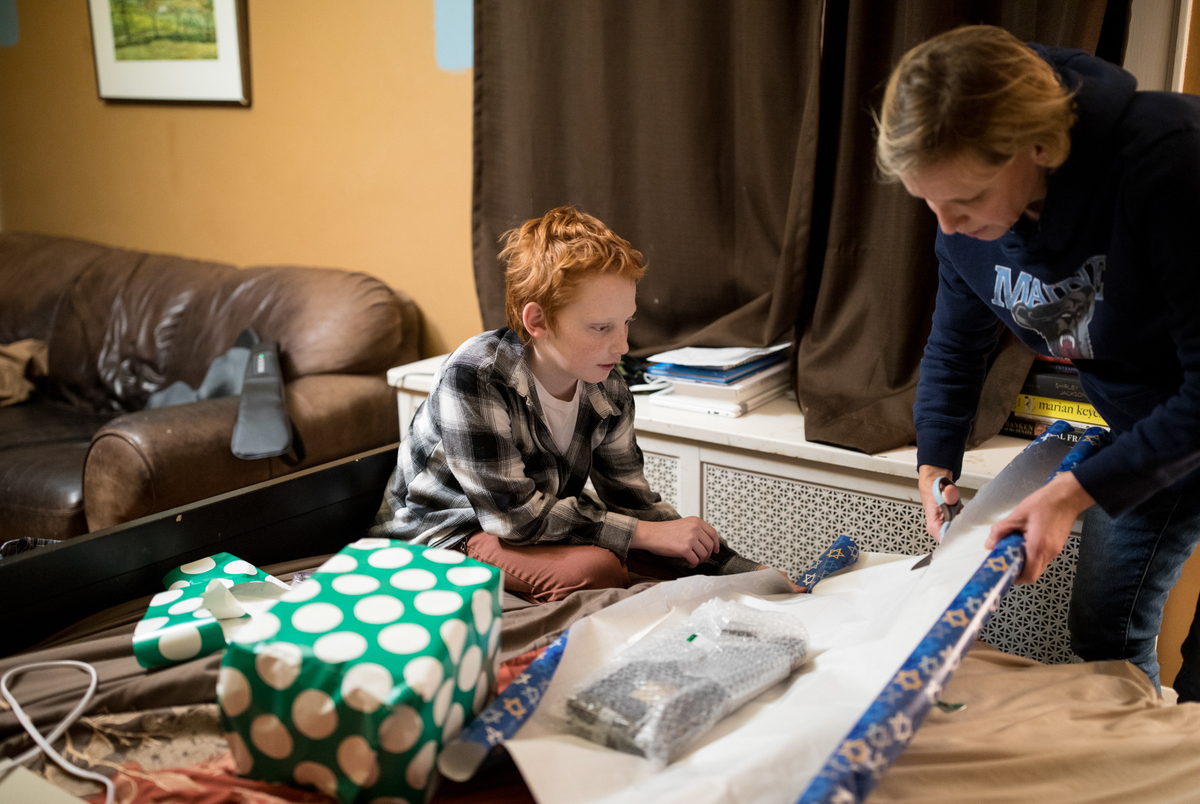 Liam and his mother Heather Leupker wrap gifts. Liam decided to get brain surgery to treat dystonia after his father had the procedure.

Liam's pain got so bad he started wearing an ankle brace to calm the spasms in his leg. He had watched his father decline to the point that he had trouble cutting his food. Liam can already feel himself losing things that he loves to do — like skateboard. He tripped and then got so frustrated he smashed it on the sidewalk.

Liam knew that he could become unable to walk, and he feared the worst: "That I won't get cured and I'll have to live my whole life with this horrible disease."

Carl began looking for treatments that could help Liam. He himself had tried drugs, but they blurred his vision and didn't help with the movement symptoms. One treatment made it to the top of his list — it looked exciting, but also scary. It's a treatment called deep brain stimulation, or DBS. In the past few decades, it's been also used to treat Parkinson's and depression, but it requires brain surgery.

Doctors implant electrodes deep into the brain to calm the neurons that are misfiring. The electrodes stay there forever, like a pacemaker for the brain. In one randomized trial, people with the device had a 39 percent reduction in symptoms, compared to 4 percent in those who had sham surgery. It does seem to work better in people who have the hereditary form of dystonia. Carl came to believe that it was the best hope that Liam could live a normal life.

Carl planned to try the surgery first. He can't ask Liam to do something this scary without experiencing it himself. "I have no choice; I have to get this surgery done."

So last December, Carl sat down in the office of his neurologist, Dr. Jerrold Vitek at the University of Minnesota in Minneapolis, to talk about the surgery. It's not an easy decision to let a doctor drill a hole in your skull and put electrodes deep in your brain. Carl talked about his three biggest fears: death, loss of cognition and behavioral changes. 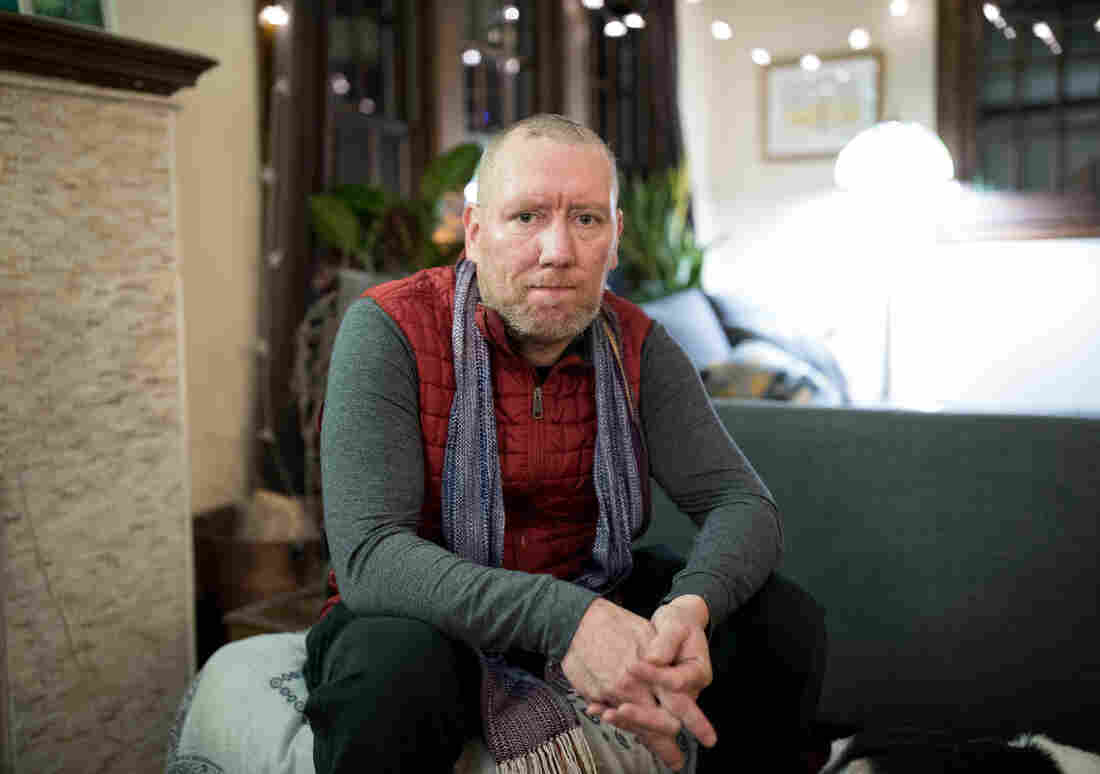 Carl decided to have a second surgery to see if it would help reduce problems with speech. Jenn Ackerman for NPR hide caption 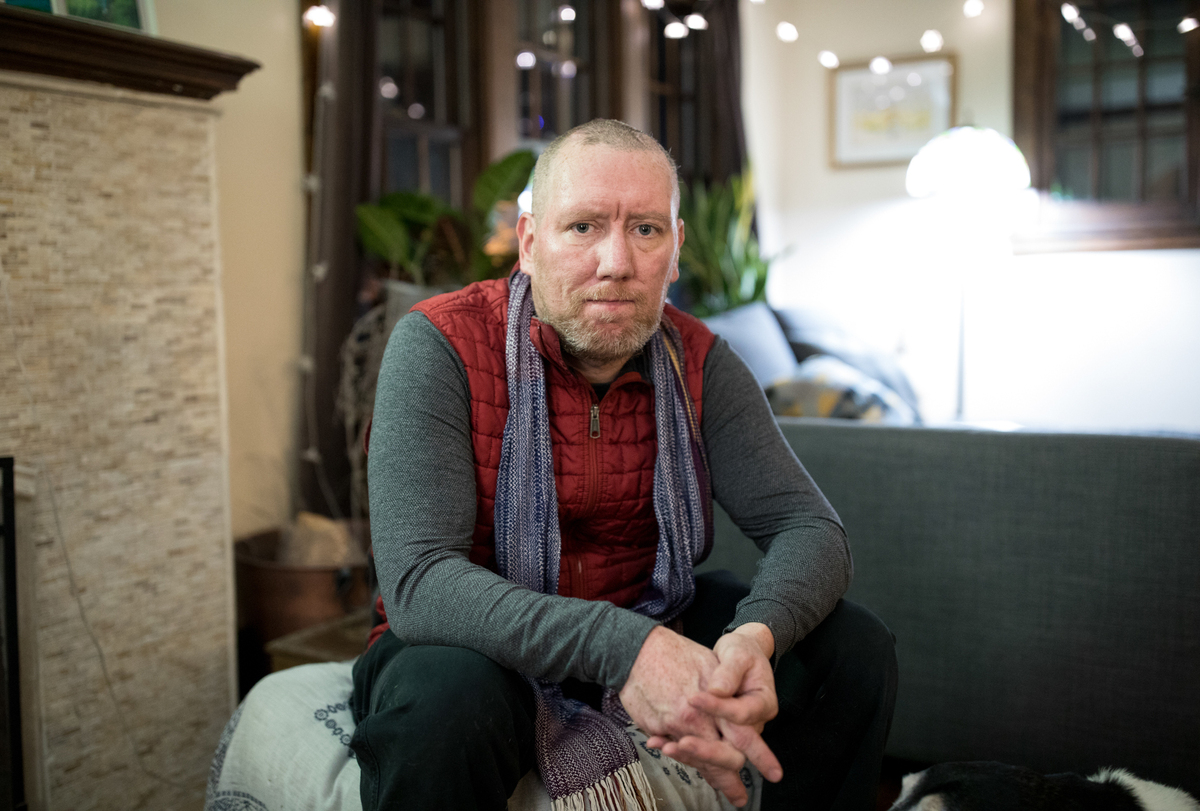 Carl decided to have a second surgery to see if it would help reduce problems with speech.

Vitek told him that the biggest risk was from bleeding that could cause brain damage — about a 1 to 2 percent chance. "That's the greatest risk. The chance of benefit is marked. the vast majority of people will benefit."

Decades ago, scientists tried to treat dystonia by operating on the part of the brain that was malfunctioning, destroying the tissue. Sometimes symptoms went away, but sometimes people got much worse. Vitek says there's a reason doctor's would be willing to try something so brutal. "One word will answer that — desperation," he says. "And people get desperate. Desperation will lead you to try things that maybe you wouldn't normally try."

Things have improved a lot since then. The Food and Drug Administration allows DBS for dystonia under its humanitarian use exemption, designed for rare diseases or conditions where fewer than 8,000 people a year are treated. But the surgery is still no simple undertaking.

On Jan. 10, Carl went into surgery. They drilled a hole in his skull and then slowly eased the electrodes a few centimeters into the brain.

They guided the electrodes to the right area by listening — they literally pick up the sounds of nerves firing. The activity in different areas of the brain sound distinct.

Carl was awake the whole time. There are no pain receptors in the brain and the surgeons needed Carl to be conscious so they would know it's not causing debilitating side effects.

In the operating room, they inserted the electrodes into the correct area of Carl's brain. Then they turned on the electrodes and asked Carl how it felt. "It's kind of like putting your tongue onto a battery," he says. "It felt like that kind of electricity."

The surgery was a success — no brain bleed. I visited him a few months later. He showed me the remote control that he uses to turn on and off the electricity in his brain. "It's off now, and now my hands are cramping up there," he says. When he turns it back on, I can see his hand relaxing. But it didn't significantly reduce his symptoms. He says he feels less pain through the day and is more coordinated with his right arm. But his speech is still garbled. Vitek, his neurologist, says that's because the electrodes are in the left side of his brain — which most directly controls his right arm. It would take another surgery to target his mouth and jaw muscles.

But Carl also got what he hoped for. After his surgery, his son Liam decided to get DBS. In June, he flew to the University of California, San Francisco, where they could do the surgery in an MRI so that Liam wouldn't have to be awake.

I hadn't seen Liam for around 10 months. Back then, he was in constant pain from muscle cramps in his foot and was wearing a ankle brace.

When I visited Liam again this September, he whizzed by me on a skateboard --- pushing with the same foot that had been in a brace. I asked him how he felt. "It feels like I've never had dystonia," he said with a wide grin. 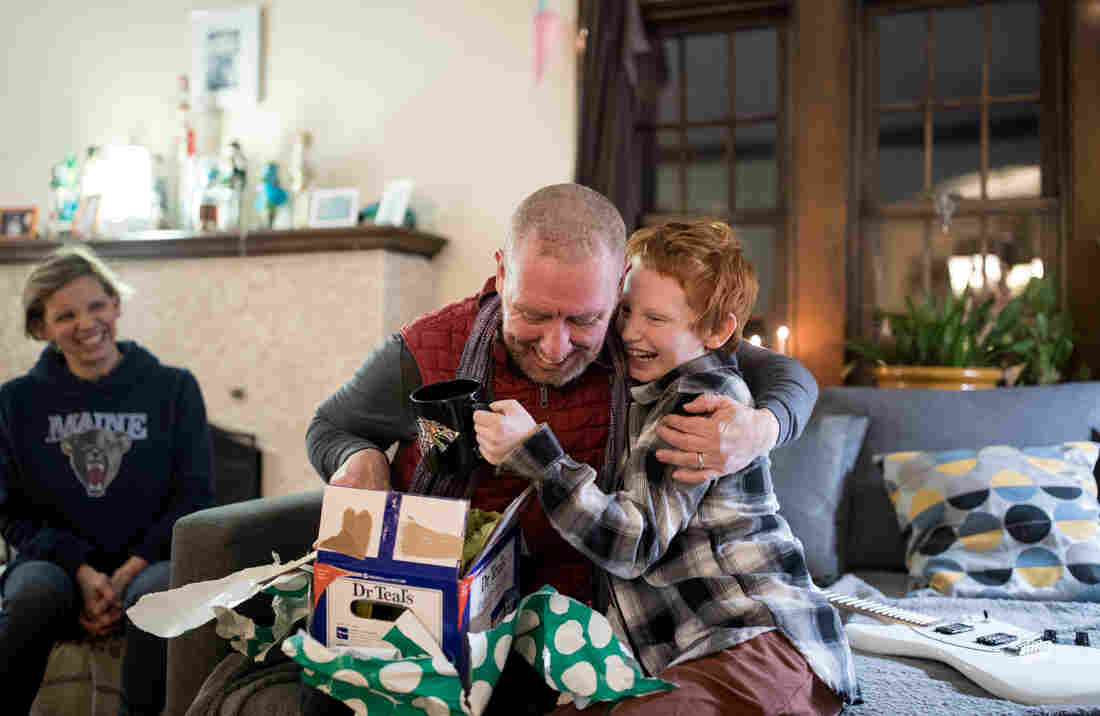 Liam's symptoms have improved a lot after having the DBS device implanted, but Carl hasn't seen as much success. Jenn Ackerman for NPR hide caption 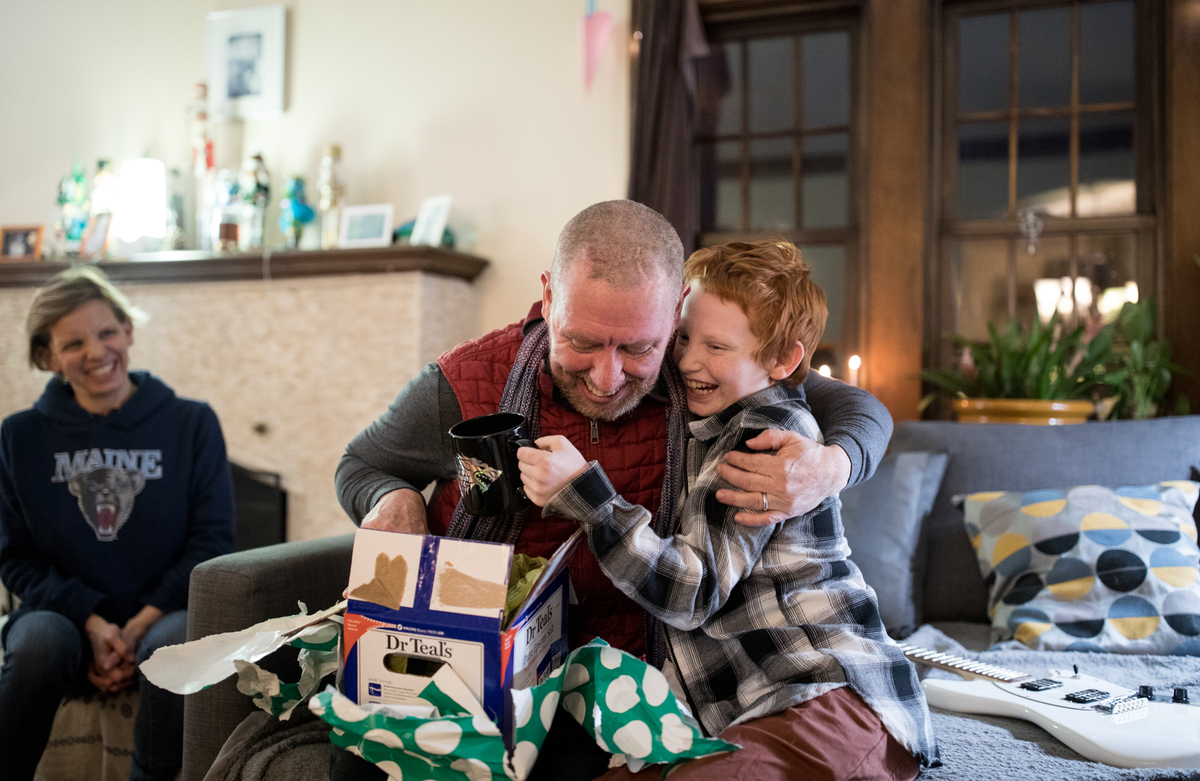 Liam's symptoms have improved a lot after having the DBS device implanted, but Carl hasn't seen as much success.

It's a bit of a mystery why the surgery worked better for Liam than Carl. Doctors suspect it might be because he's younger and his disease is less advanced. DBS hasn't cured Liam, but it has given him the ability to control the symptoms and hopefully stop them from getting worse. "I think that it's gonna halt the progression or at least that's what the doctors say," he says. "If I'm feeling as good as I am now, for the rest of my life? That would be pretty amazing."

When Carl was growing up, he just had to accept that the dystonia would rob him of things he loved to do. But Liam doesn't have to think that way.

And he's given Carl new hope, too. In November, he returned to have an electrode placed on the other side of his brain to see if it would improve his speech — he should know if it's going to help by February. This one, he says, is for himself.