Accessibility links
Blood From 1 Million Americans May Offer Clues To Disease : Shots - Health News Federal researchers are collecting blood samples from 1 million Americans as part of an effort called "precision medicine." But some critics worry that the path ahead is expensive and unclear.

Precision Medicine: The Hope And The Hype 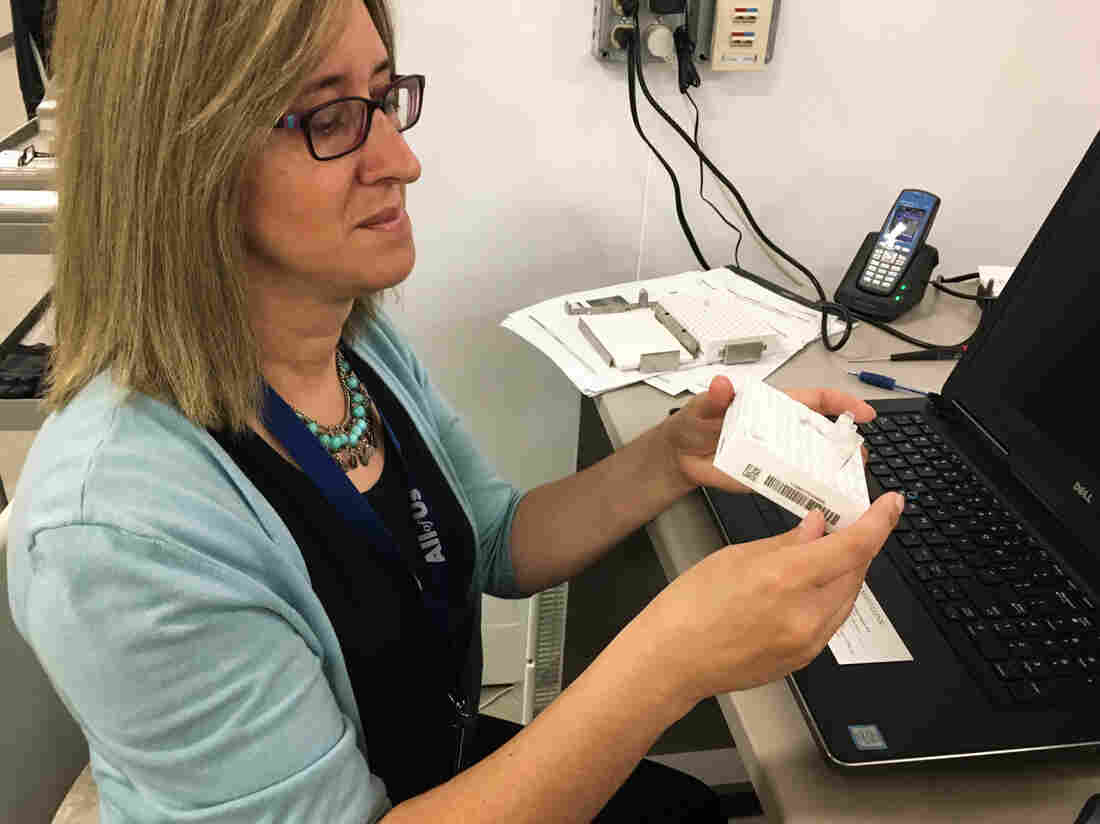 Mine Cicek, an assistant professor at the Mayo Clinic, processes samples for the All of Us program. Richard Harris/NPR hide caption 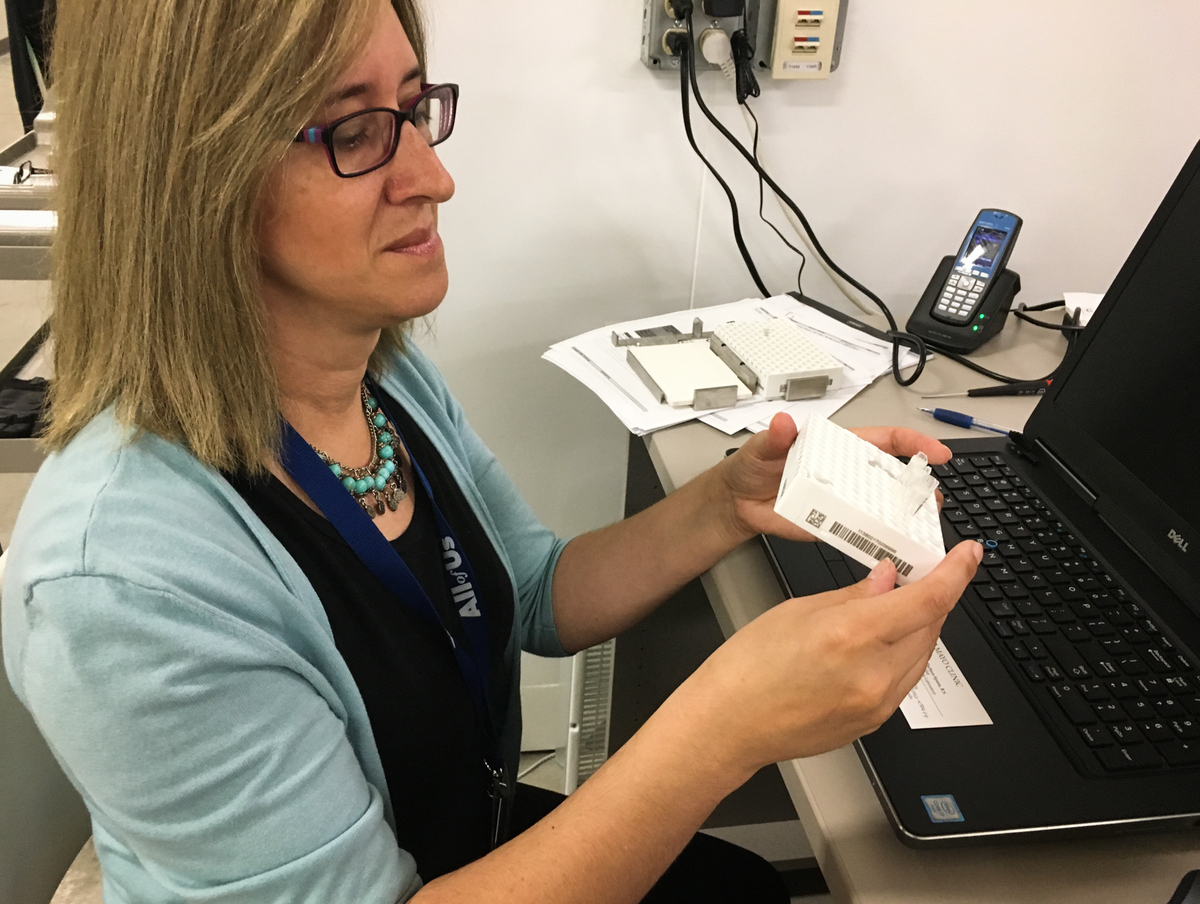 Mine Cicek, an assistant professor at the Mayo Clinic, processes samples for the All of Us program.

Federal taxpayers are pouring hundreds of millions of dollars into a quest for blood samples, medical information and fitness readouts from a million Americans. It's called the All of Us precision medicine initiative, and it's the biggest push ever mounted to create a huge public pool of data that scientists — and anybody else who is interested — can mine for clues about health and disease.

Proponents say this big data approach to medicine will be revolutionary. Critics aren't so sure.

The plan is to recruit a million Americans to sign up for a program that will not only gather all sorts of medical data about them but will also follow them for at least a decade, possibly much longer. Their electronic medical records could end up in huge databases. The physical samples of blood and urine will end up in an industrial park in Rochester, Minn.

Mine Cicek, an assistant professor of laboratory medicine and pathology at the Mayo Clinic, leads me into a vast building with more than an acre and a half of floor space. "This used to be an old warehouse, but when we moved in three to four years ago, we really built a laboratory, and it's in the space," she says.

Power cords drop down from the ceiling to lab benches and robotic instruments, lined up row after row. These machines will help take the grunt work out of sorting through what will eventually be 34 million samples, gathered from all across America.

At the moment, the project is limited to pilot studies, with fewer than 100 samples a day coming off the UPS and FedEx trucks to be sorted, centrifuged and ultimately plunged in the deep freeze. But when the operation is fully up to speed, the lab may receive specimens from a thousand participants a day. 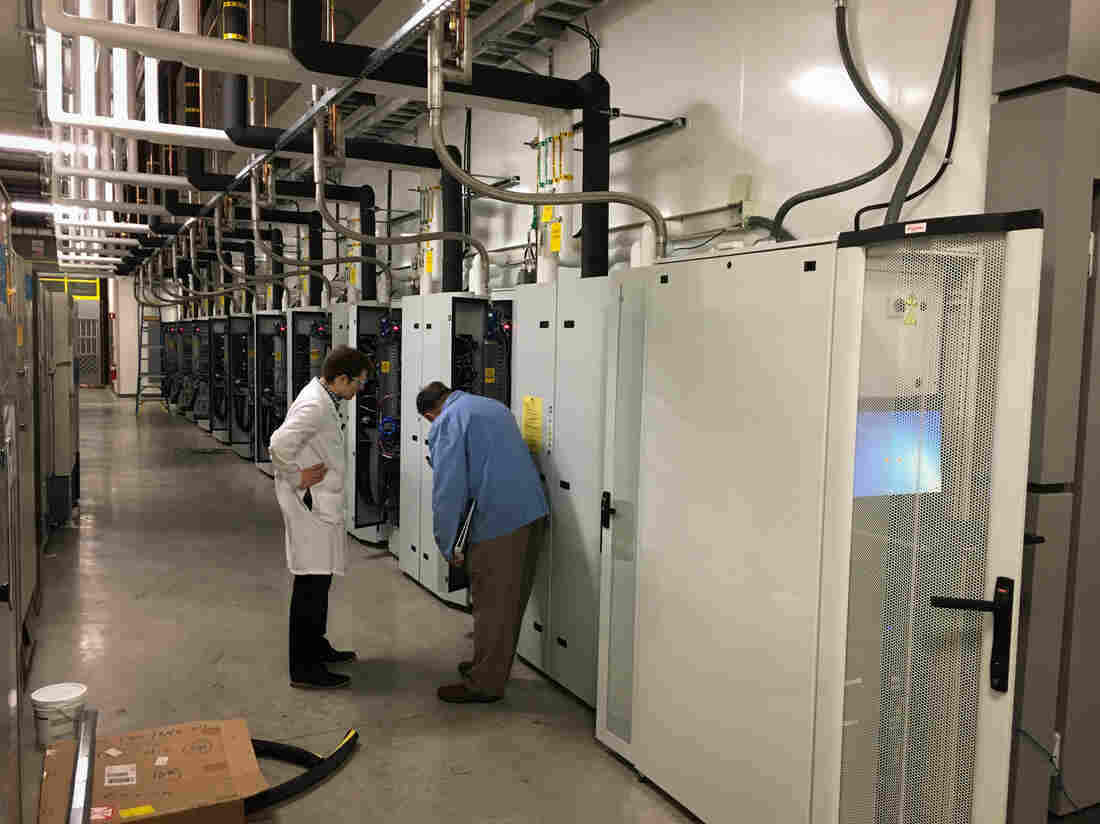 Technicians examine part of a 74-foot-long freezer. Robots inside the freezer will handle millions of specimens and store them in even colder freezers inside. Richard Harris/NPR hide caption 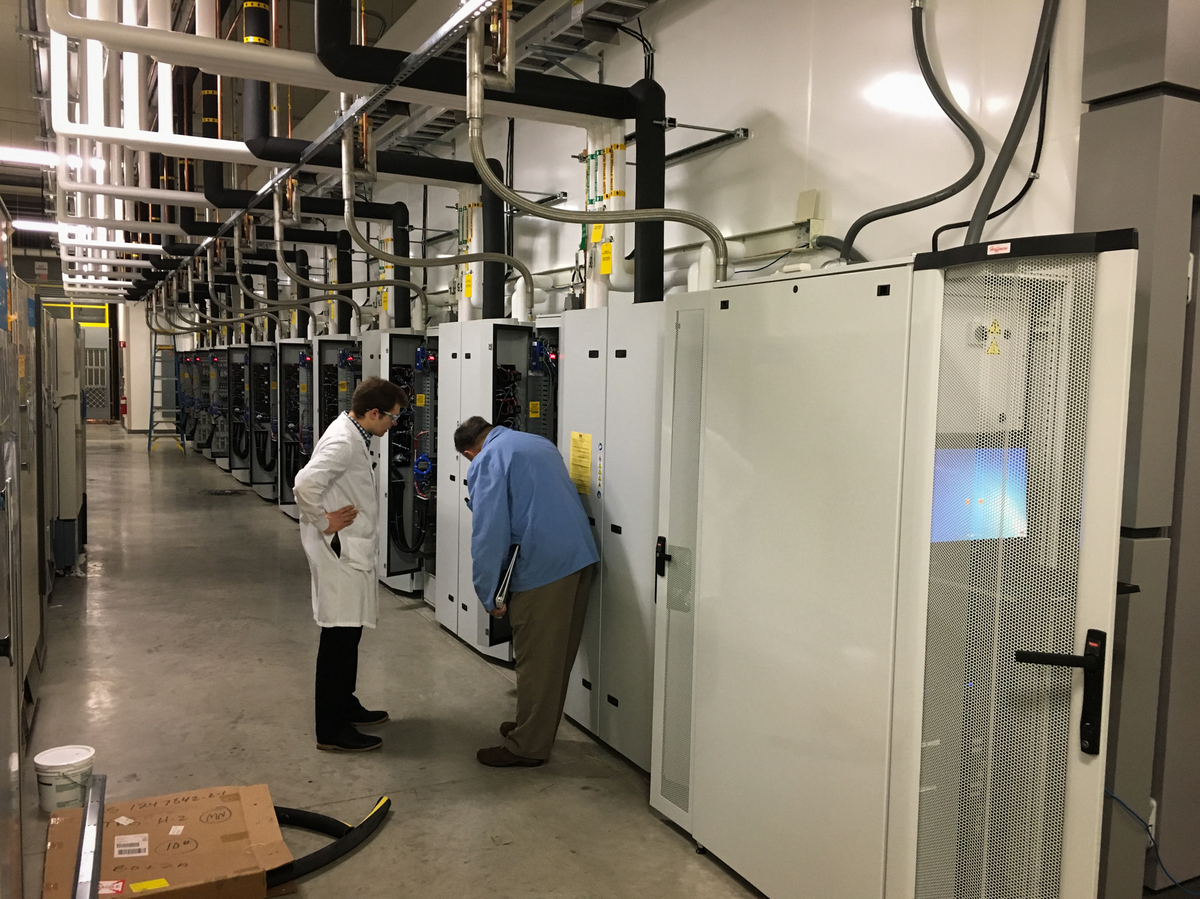 Technicians examine part of a 74-foot-long freezer. Robots inside the freezer will handle millions of specimens and store them in even colder freezers inside.

Cicek takes me into another cavernous part of the warehouse, filled not only with ordinary looking freezers but also with one behemoth — 74 feet long and more than 15 feet wide. It's bigger than a railroad boxcar.

We loop around to the front, which has a glowing green slit, delineating the narrow freezer door.

Inside, robots pick up the samples, read bar codes stamped on them and store them in individual freezers hidden inside. The robot works in a freezer set to minus 20 degrees Celsius, sorting samples into smaller freezers kept at minus 80 C (or minus 112 degrees Fahrenheit). People only enter the freezer if there is a problem inside.

When everything is up and running, Cicek says, the incoming tubes of blood will be processed by a fully automated system. All she'll have to do is pick up boxes of samples and feed them into this freezer.

And the scientific output for this enterprise? That is less tangible at the moment.

"It's really a research resource that we're building for the whole country, if not for the whole world," says Eric Dishman, who runs the National Institutes of Health's All of Us initiative from another anonymous building, in Rockville, Md., a suburb of Washington, D.C.

His job is to build it and then make the data widely available — to top biomedical researchers as well as to community colleges and even high schools, so all sorts of people can dive into the data and try to extract meaning from it.

Echoes of the human genome project

In some ways, this project is akin to the original effort to sequence the human genome more than a decade ago. It's not an end in itself; it's a tool. The idea is to bring the big data revolution that has reshaped online commerce and social media to science. Ultimately, the information could help make medicine more personal and precise.

Scientists don't yet have a concrete plan, but Dishman sketches out the goals. "We keep looking at diseases in isolation," he says. But by looking at entire genomes, he hopes scientists will get a better idea about how diseases are interconnected.

"The All of Us research program is really trying to bring a diversity of people, of health conditions, and a diversity of data sets to try to understand us more in our complexity," he says.

Scientists might scour this pile of data for unexpected patterns or dive into it looking for answers to specific questions.

Dishman, who has lived through a 23-year odyssey with kidney disease and kidney cancer, uses his experience as an example. "I had $6 million of care. Now looking back at it, scientists tell me that 90 percent of everything we ever did to me was destined to be wrong."

Medicine is often a matter of trial and error, so that is not so unusual. But Dishman also had the DNA in his tumor deciphered. That gave doctors yet one more clue about what to do, and it led to an effective treatment.

"I'm nervous about sharing this story because it is hopeful," Dishman says. "I also know there's a lot of science, but also a lot of luck this worked for me."

Still, he regards his story as a lesson about what the future could bring, in a world where genetic data are merged with information from medical records, exercise monitoring gear and whatever else can be put into a giant database for analysis. The hoped-for output of this will be "precision medicine."

"We are in the early days of precision medicine and this is exactly why we need to accelerate the science and the discovery so there's an evidence base for the decisions and choices we're making for you as an individual, as well as the general population."

Among those skeptical about the big talk — and big investment — behind precision medicine is Kenneth Weiss, who recently retired from his post as a genetics professor at Penn State, and has written about this issue.

"I think there will be some progress, but I also think this is also as much a slogan to get funding as it is a serious promise," he says. The All of Us program received $360 million for its first two years of funding and hopes to run for many decades.

Gathering huge data sets may be useful for merchants trying to suss out consumer spending patterns, but he cautions that in biology, it may lead to more confusion than clarity. That is because many health conditions involve hundreds of genes, and the pattern is different in every individual. As it is, the more scientists look the more variants they find. So, he says, think about what that will look like when they have gathered a million samples.

"Bigger and bigger samples will just in a way identify more and more very rare or very weak effects, and the upshot will be each person will become even more different in terms of the identifiable genetic effects," Weiss predicts.

When the human genome was sequenced, many scientists hoped they would quickly be able to identify the common genes that are responsible for common diseases, like diabetes, heart disease, high blood pressure and so on. That simply didn't pan out. Common diseases don't have common genetics. Weiss says it's time to cut our losses pursuing that concept.

"I think we're already at the diminishing returns point for many of the complex traits that important to our society in terms of health."

The solutions to these common conditions lie largely in changing diets, exercise habits and tobacco addiction. Focusing genetic resources on diseases that do have strong genetic components makes a lot of sense, he says.

"But pouring more and more investment into these huge studies based on the idea that if you search enough computer data you will get an answer, I think is a false promise," he says.

He would rather take the money being spent on All of Us and use it to work on gene therapies for diseases that have a clear genetic cause, such as muscular dystrophy or Huntington's disease. "And once those [therapies] are developed — which I think they will be because I think humans are really good at engineering — then we can extend to the less clear-cut genetic traits."

Meanwhile, if the goal is to improve the health of our population, he says, "let's spend money on dietary exposures, exercise exposures, all the things that we know about to reduce the frequency of the kinds of diseases that we're spending so much money to try to treat is if they were genetic."

Given all the momentum built up behind the precision medicine initiative, Weiss is not voicing a popular point of view. But the retired geneticist says he has no ax to grind — and no brilliant insights about what would actually lead to medical breakthroughs. His concern is that biomedical research is committed to this idea because they have a tool they are eager to use — not because they have a clear path ahead.