Accessibility links
Experimental Capsule Samples Gases As It Passes Through The Gut : Shots - Health News The electronic pill looks like the biggest multivitamin a human could possibly swallow. Tests have show that the experimental device can measure gases tied to microbes and digestion. 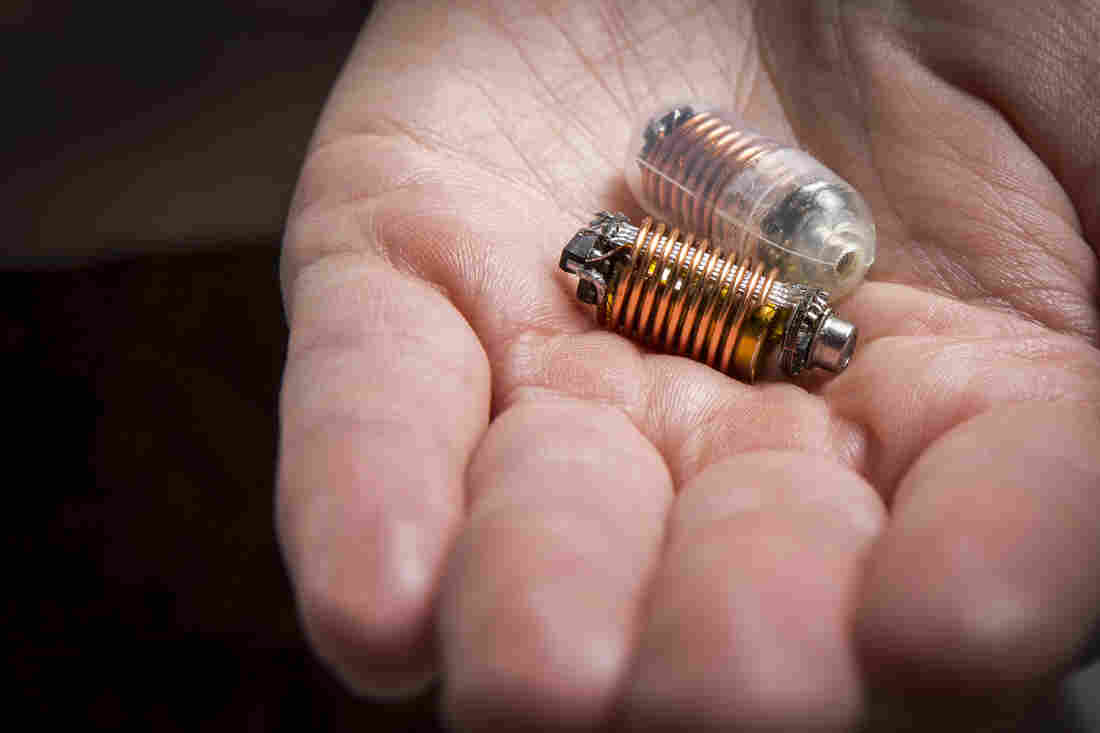 These large capsules, which can be swallowed, measure three different gases as they traverse the gastrointestinal tract. Courtesy of Peter T. Clarke/RMIT University hide caption 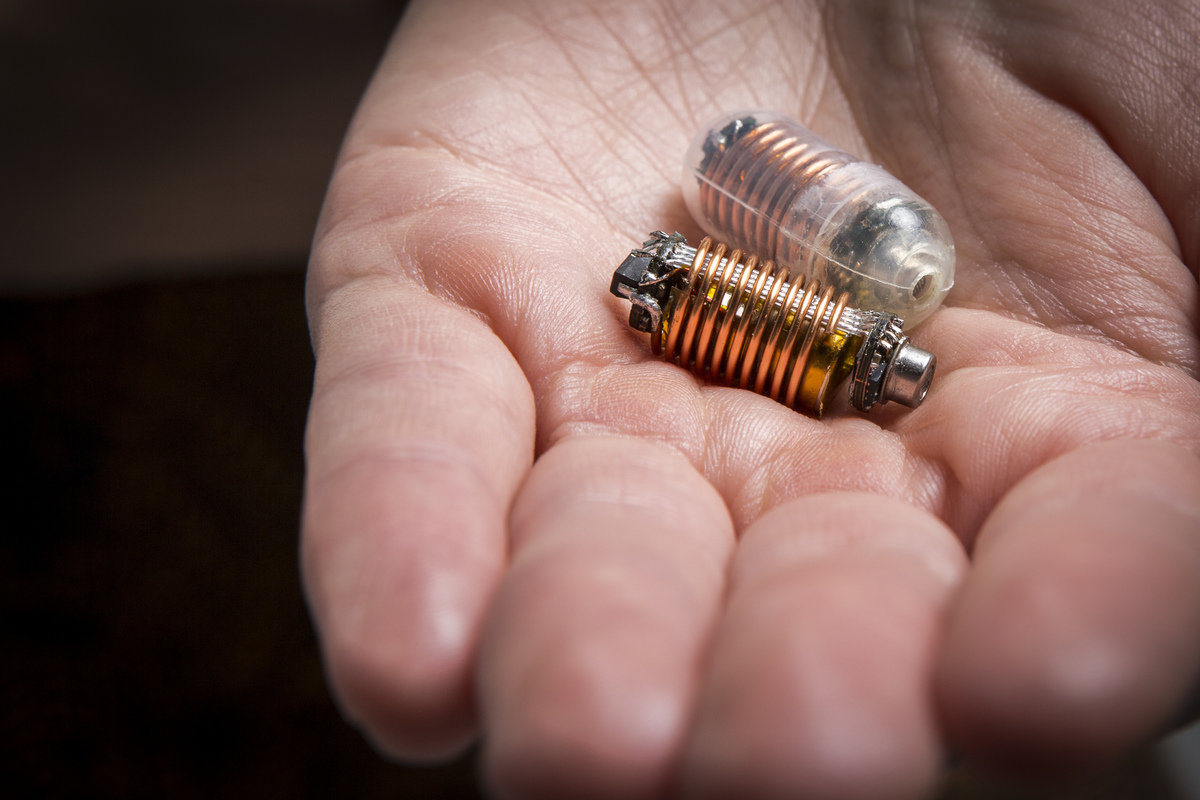 These large capsules, which can be swallowed, measure three different gases as they traverse the gastrointestinal tract.

To study the human gut and the microbes that live within it, scientists have a couple of options. They can grab a small piece of tissue from the gastrointestinal tract or collect a sample of fecal matter.

Neither way is ideal, says Jack Gilbert, a microbiologist and director of the Microbiome Center at the University of Chicago. "By studying [the sample], you're changing it, just by observing it, because you have to cut it out and analyze it," he says.

But a third way may become available to both scientists and clinicians. It's an ingestible electronic capsule that senses certain gases released in the human gut – some of the same stuff that you may already be familiar with when it eventually passes into the open air.

The capsule's creator, electrical engineer Kourosh Kalantar-Zadeh, a professor at RMIT University in Melbourne, Australia, says that the device has already begun revealing secrets about the human gut.

To test the capsule, Kalantar-Zadeh enlisted 26 healthy volunteers – one being himself. Each person ate the same diet to help rule out food as a cause for different results, except for two volunteers who ate a high-fiber diet and two others who got one with little fiber.

"We didn't have any problems," he says. But they did notice some oddities. For one, Kalantar-Zadeh says that the pill's data showed some curious oxygen measurements in the stomach. Apparently the stomach was releasing harsh oxidizing chemicals along with typical stomach acid to aid digestion. "It's a very simple phenomenon, but nobody had ever observed it before," he says.

The results of the testing were published Monday in the journal Nature Electronics.

At roughly an inch long and half an inch wide, the electronic pill looks something like the biggest multivitamin a human could reasonably swallow. Curled around its tiny batteries is an antenna that beams data out of the body where it can be viewed on a nearby smartphone.

A membrane on the capsule's nose lets gases through to a sensor that detects concentrations of oxygen, hydrogen and carbon dioxide. Kalantar-Zadeh says those three gases were picked because they provide important information about the gut.

By sensing oxygen content, for instance, the pill can figure out where in the gut it's located. Oxygen starts off high in the stomach and drops off throughout the intestines. When the pill senses an oxygen-free environment, it knows that it's finally made it to the colon and soon will exit.

The other two gases give researchers information about the gut microbiome's activity wherever the capsule happens to be in the digestive tract. In this case, carbon dioxide and hydrogen gas are both byproducts of fermentation, a process many bacteria use to digest food and create energy, Kalantar-Zadeh says. "Looking at how fast these gases are produced, where they are produced and what types of gases are produces gives us clear information about the activity of the microbiome," he says.

The researchers are forming a company that will continue clinical testing of the device for efficacy and safety. Kalantar-Zadeh stands to receive a royalty for sales of the capsule. "We're not doing this for profit," he says. "The only thing we want to see is benefit for people."

The capsule will cost $30 to $40 to produce at scale, Kalantar-Zadeh says, but they don't know the retail price.

The capsule may have some far-reaching applications, says University of Chicago's Gilbert, who wasn't involved in the development of the device. "Any ability to monitor the production or consumption of chemicals in the environment of the gut is incredibly powerful," he says. "This device is just limited to carbon dioxide, hydrogen and oxygen, but that alone is an exciting potential for this to be linked to further research of the gut."

For instance, being able to monitor gut bacteria activity like this could one day help clinicians better diagnose certain diseases. "So for someone with irritable bowel or colitis or even someone with the potential of developing colon cancer," he says. "Are there changes in gas concentrations along the tract and can we correlate [them] to whether they develop the disease or not? That would be cool. I could think of 17,000 of these examples." Of course, it would take years of careful research and development to fulfill that potential, and it might not pan out.

The data might also give scientists a fresh look at how different people respond to certain foods, says Kyle Berean, an electrical engineer at RMIT University in Melbourne, Australia who also worked on the device. We rely on microbes to break down certain foods – like starches or complex proteins – so that we can absorb the nutrition.

Too little bacterial activity is inefficient, but too much can be dangerous. What that proper level is – and how to achieve it with the right food – might be different for everyone, Berean says. "We keep hearing about individualized diets," he says. "This provides an opportunity to see how your body is actually interacting with that food."

The gas-sniffing capsule isn't the only attempt to probe the human gut in real time. The Food and Drug Administration cleared the way for a swallowable capsule camera in 2014. And a group at MIT has experimented with a pill that could be used to collect vital signs as it travels through the digestive tract.

"There's an ongoing effort to develop these platforms," Gilbert says. But he says that this report is a proof of concept that opens the door to new means of understanding the gut. "The gut is right inside us, but it's as far away as Mars in terms of getting inside and seeing what's happening in real time. This is a potential tool by which we can finally analyze that."

Angus Chen is a journalist based in New York City. He is on Twitter: @angRChen.