Accessibility links
Flu Season Is Shaping Up To Be Nasty, CDC Says : Shots - Health News The flu season started early this year and is already widespread throughout the country and intense in dozens of states. But it's not too late to get that flu shot, officials say. 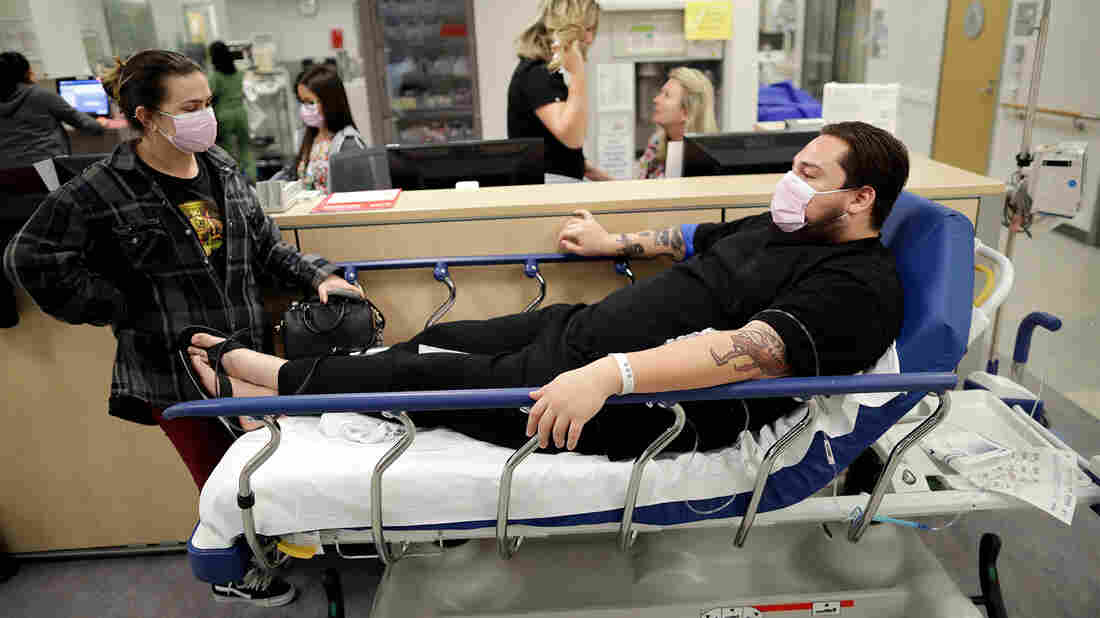 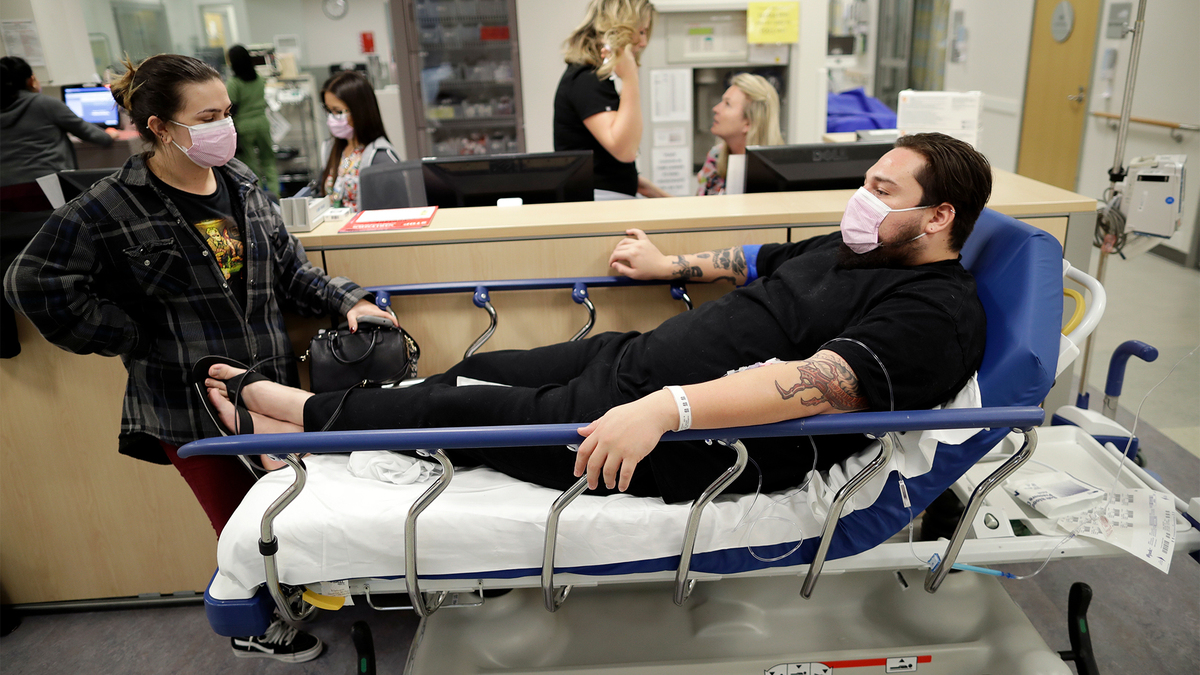 Flu patient Donnie Cardenas waits in an emergency room hallway with roommate Torrey Jewett at the Palomar Medical Center in Escondido, Calif., this past week.

The United States appears to be in the midst of an unusually severe flu season, officials at the federal Centers for Disease Control and Prevention said Friday.

The flu season started early, which is never a good sign, and the flu is already widespread throughout the country, the CDC's latest report shows. Half of states are reporting especially intense flu activity.

"We are currently in the midst of a very active flu season with much of the nation experiencing widespread and intense activity," CDC Director Brenda Fitzgerald told reporters during a briefing.

Based on the latest available data, the United States could be experiencing one of the most severe flu seasons in years, possibly similar to the severe 2014-2015 flu season, officials say. 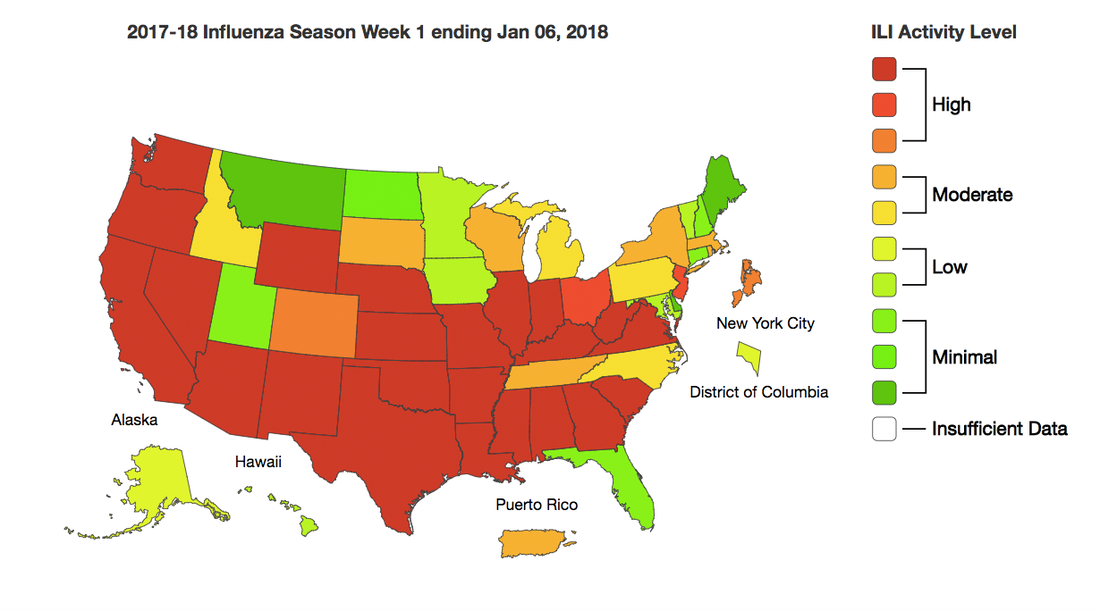 Activity levels are based on the percent of outpatient visits in a state due to influenza-like illness (ILI) and are compared with the average percent of ILI visits that occur during weeks with little or no influenza virus circulation. CDC hide caption 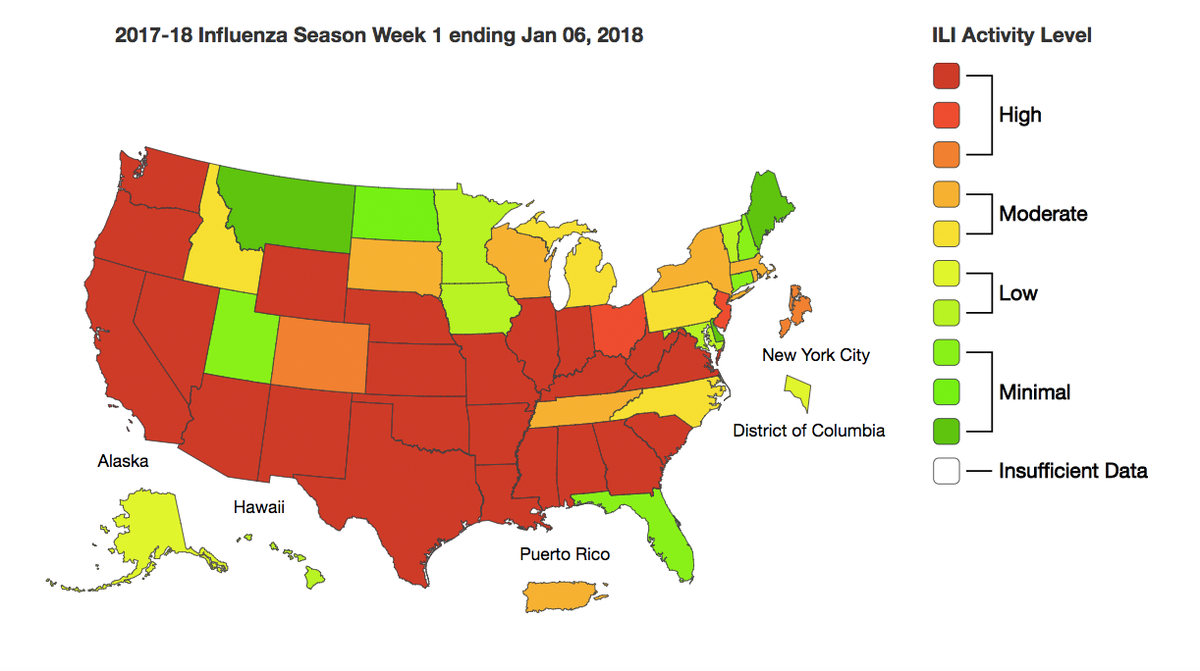 Activity levels are based on the percent of outpatient visits in a state due to influenza-like illness (ILI) and are compared with the average percent of ILI visits that occur during weeks with little or no influenza virus circulation.

Officials cautioned, however, that the flu is very unpredictable. So there's a chance the season could slow down quickly or end early, making it a more normal flu season.

But the most recent data show that the proportion of people rushing to their doctors to get treated for the flu has already hit 5.8 percent, which is as high as that number gets during the peak of a really bad flu season, the CDC says.

In addition, the rate at which Americans are being hospitalized for the flu almost doubled in the last week, to 22.7 for every 100,000 hospitalizations, according to the CDC.

Those are two of the key ways the CDC monitors the severity of a flu season.

So far, 20 children have died from the flu, compared with a total of 101 last season.

Officials, cautioned, however, that the hospitalization rate for the flu so far this year is slightly below the 2014-2015 rate.

The main reason the flu appears to be so severe is that it's a strain known as H3N2. That strain tends to make more people sick, and the people who get the flu tend to get sicker. It's especially dangerous for children and the elderly.

"When H3N2 is prominent, we tend to have a season with far more hospitalizations and deaths," Fitzgerald says.

To make matters worse, the vaccine may only be about 30 percent effective against that strain. That is better than the 10 percent effectiveness reported in Australia, which has its flu season before the United States does and often predicts what will happen in this country.

The flu season may be peaking in this country, but it could continue for many more weeks. So even though it takes two weeks for the vaccine to start protecting people after they get vaccinated, it's still worthwhile to get vaccinated, they say.

"While our flu vaccine is far from perfect, it is still the best defense we have," Fitzgerald says.

Officials are also encouraging doctors to treat some flu patients with antiviral drugs quickly, including children, the elderly, people who get severely ill and those suffering from other health problems. While there are spot shortages of antiviral drugs, the overall supply is plentiful.