Accessibility links
Mapping How The Opioid Epidemic Sparked An HIV Outbreak : Shots - Health News Researchers knew the HIV outbreak in the small town of Austin, Ind., was related to IV drug use. Mapping how the virus mutated over time revealed its path — and how it might have been stopped. 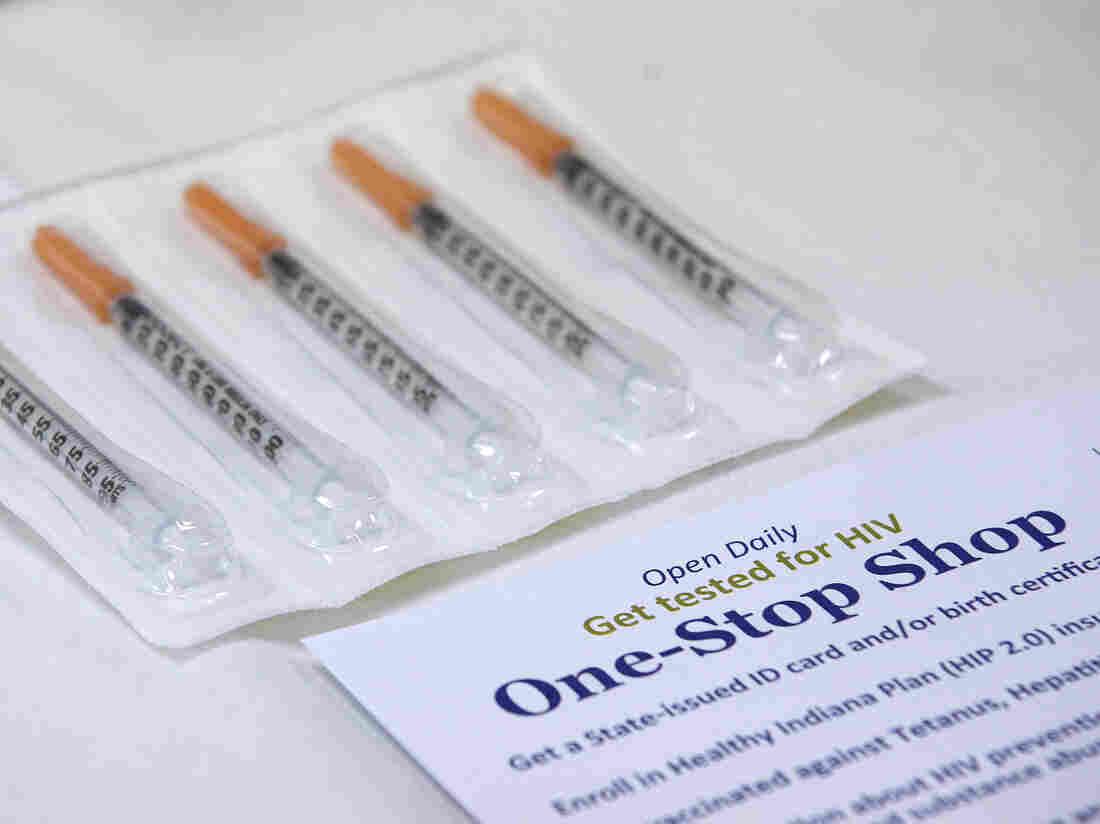 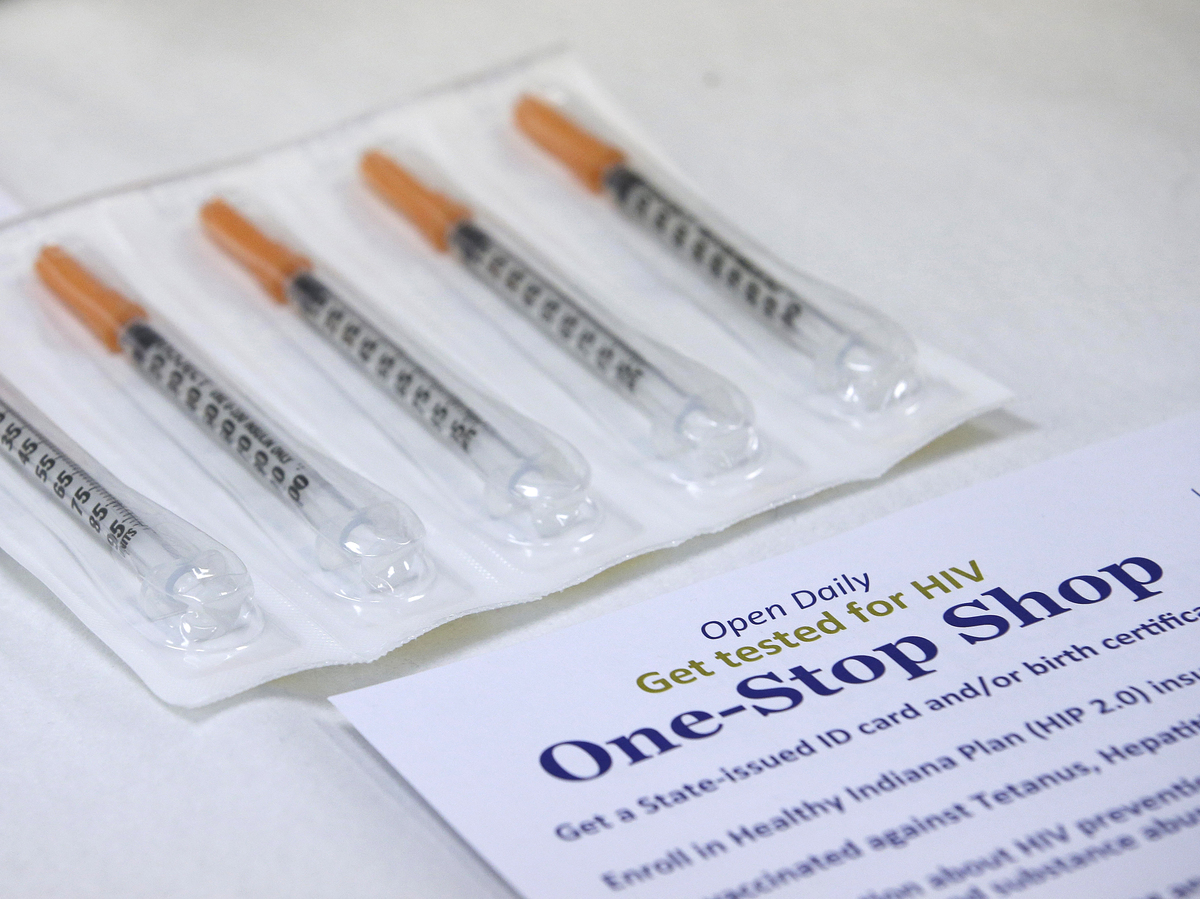 A needle exchange program at the Austin Community Outreach Center in Austin, Ind., is aimed at stopping spread of HIV.

When people started to show up to Dr. William Cooke's primary care office in Austin, Ind., in 2014 with HIV, Cooke knew it was probably related to the region's opioid epidemic. But what he and the rest of the public health community didn't know was who they were missing or how long the HIV outbreak had been going on.

Now they've got a clearer picture — literally. In visualizations published in the Journal of Infectious Diseases, dots and lines define the constellations of Indiana's HIV outbreak. Using genetic sequencing, they show how long the outbreak had been going on, connected people who hadn't previously been linked by traditional methods, and showed how the virus jumped from a slowly spreading infection to a virus transmitted quickly via needle sharing and other, smaller sub-epidemics.

Genetic data has been used to track HIV before. But now, the technology is being used to map HIV outbreaks in real time, lending molecular weight to the in-person interviews that public health officials have used for centuries to track and stop outbreaks. The Austin reconstruction is an example of what it can do.

"This is an instrumental tool for bringing new infections down to zero," says John Brooks, senior medical advisor at the Centers for Disease Control and Prevention's Division of HIV/AIDS Prevention. "We have the tools, in terms of treatment reducing transmission to nearly zero. We have prevention... and now we know how to find people."

The CDC released data Jan. 12 showing that more than 1 in 4 people who inject drugs reuse needles and many not have had an HIV test in the last year, the new data is particularly relevant.

A map to the future of testing

The visualizations aren't typical maps. There are no boundaries in space. Instead, they map connections, communities and time, using color, lines and dots. 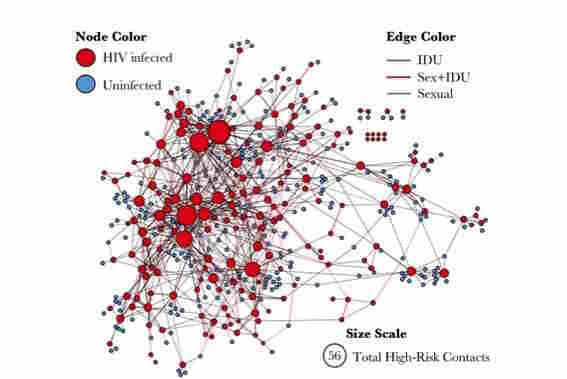 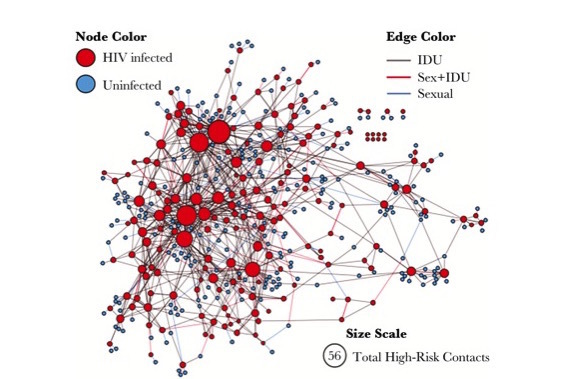 The maps go through two iterations, linking the traditional shoe-leather epidemiology of painstaking interviews with every person caught up in the outbreak, called contact tracing, to tracking the virus as it evolves.

Interviews yield one vision of the outbreak: a mass of heavily clustered red and blue dots representing people who acquired HIV and people who are at risk but still HIV negative. Some dots are large and red, representing people with HIV and multiple high-risk contacts. Others are closer to pinpoints — in red and blue — showing people with lower risks but also living within the constellation of the outbreak. There are a few outliers with just one or two connections with the larger mass, but it's a largely undifferentiated huddle of connections and risk.

That's because as good as person-to-person interviews can be at assessing what made a person vulnerable to HIV and who else should be tested, it inevitably misses people, says Ellsworth Campbell, a CDC computational biologist and the lead author on the paper.

"When the [transmission] is anonymous or they don't know someone's status, we miss them," he says. Public health officials also can miss people outside county lines, since so-called partner tracing ends at the jurisdiction.

Partner interviews can be misleading, also. For instance, flight attendant Gaétan Dugas had long been named "patient zero" in the U.S.'s HIV epidemic. But molecular tracing done in 2016 showed that Dugas's virus wasn't the originator of the U.S. epidemic.

So the CDC decided to use the same kind of molecular sleuthing that ferreted out Dugas's real place in the epidemic, and layer those results over the data health workers collected in interviews. The idea was that they'd test it on the Indiana outbreak first, and then offer the technology, which uses multiple programs and takes partner interviews into account, for free to public health departments across the country.

The DNA tracking found seven different major mutations of the virus as it moved through Scott County, Ind. This included smaller clusters of five or fewer people and three new subgroups that may not have been connected otherwise.

HIV is a virus uniquely well suited to this kind of detective work, according to according to Dr. Felipe García, an HIV vaccine researcher in Barcelona, because it mutates rapidly.

"The HIV variability in one person is higher than all the flu variations in the world in one season," he says. "When you live with HIV, you don't live with one virus. You live with a population of viruses."

Researchers knew if the virus DNA sequences were closely related, those infections were connected. They also knew that more distantly related infections either came earlier or later in the outbreak. Using another test, they estimated how recent the infections were. Put those results together with the shoe-leather epidemiology results, and you have the final visualization.

What Campbell and his team found was sometimes surprising. For instance, they found that the progenitor virus — the one that started the epidemic — belonged to a man who had acquired HIV nearly a decade before.

Plus, there were people diagnosed around the same time as the outbreak who had been assumed to be part of it, but the genetic data revealed they were not.

The researchers also wanted to find out what risk factors, such as needle-sharing or unprotected sex, helped spread the virus, so they mapped those, too.

The initial infections were among people who mostly didn't inject drugs, but did have more than two sex partners. But they accounted for only 1 percent of the infections.

Next, the virus jumped to what would turn out to be the largest group affected: people who shared needles.

But then it shot off in another direction: people who said they shared needles with someone who reported trading sex for drugs or money. This was a discovery: People who traded sex for a fix or a place to stay, but who weren't necessarily commercial sex workers, turned out to be one of the drivers of the epidemic.

The map suggests multiple times and places that the outbreak could have been stopped, Campbell says. "This can help us respond in the future."

The visualization impressed epidemiologist Patrick Sullivan at Emory University. Sullivan works on AIDSVu.org, another HIV visualization tool that maps where the greatest untreated need is, and where the services are. Often, they don't overlap.

"As the numbers [of new infections] go down, it will be more and more important to be really targeted and as efficient as possible with helping to find folks exposed to HIV and getting them into care," he says. "This is an exciting new chapter."

But others aren't quite as convinced. Indiana physician Cooke treated many of the people in that HIV outbreak. And he said he didn't need DNA sequences to see it coming.

He rattled off the statistics: Scott County, where Austin is located, was second in the state for hepatitis C rates, which can reflect syringe sharing. In 2014, Scott County had the third-highest rate of drug poisoning deaths — a marker of overdose — and had no syringe access program until most of the people in the outbreak had already been infected. And Scott County had the lowest quality of life in the state, according to Robert Wood Johnson Foundation data.

What's more, Cooke says, the area was in the top three in the state for measures of childhood abuse and neglect — a marker of adverse childhood experiences that is associated with higher rates of injection drug use and HIV diagnosis.

At each step in this outbreak, officials could have intervened without the DNA map, Cooke says. If that early person with HIV were able to access treatment, the risk of transmitting the virus in the first place would have been negligible. If there had been a syringe access program, there would have been less needle sharing and even injecting drugs wouldn't have transmitted the virus. If there was adequate mental health care, people might deal with childhood traumas differently. If addiction treatment were more readily available, if HIV prevention tools like Truvada were available everywhere — all of these could have deescalated the outbreak, he says.

Cooke points to another CDC paper, this one from 2016, listing 220 counties, primarily in Appalachia, that face similar risks for HIV outbreaks as Austin.

"If we already know what communities are at risk; why aren't we doing more?" he says. "There's more than HIV at stake. There's infective [skin disease associated with reusing syringes]. There's OD deaths. There's hepatitis B and hepatitis C, and lots of other things. The focus shouldn't just be on the next HIV outbreak, but helping people at risk not get sick and die as much. We can do that without fancy tests in a lab. That's great for tracking things, but we have real people dying."

Heather Boerner is a health care and science journalist based in Pittsburgh, and author of Positively Negative: Love, Pregnancy, and Science's Surprising Victory Over HIV. She's on Twitter: @HeatherBoerner.