Precision Medicine: The Hope And The Hype 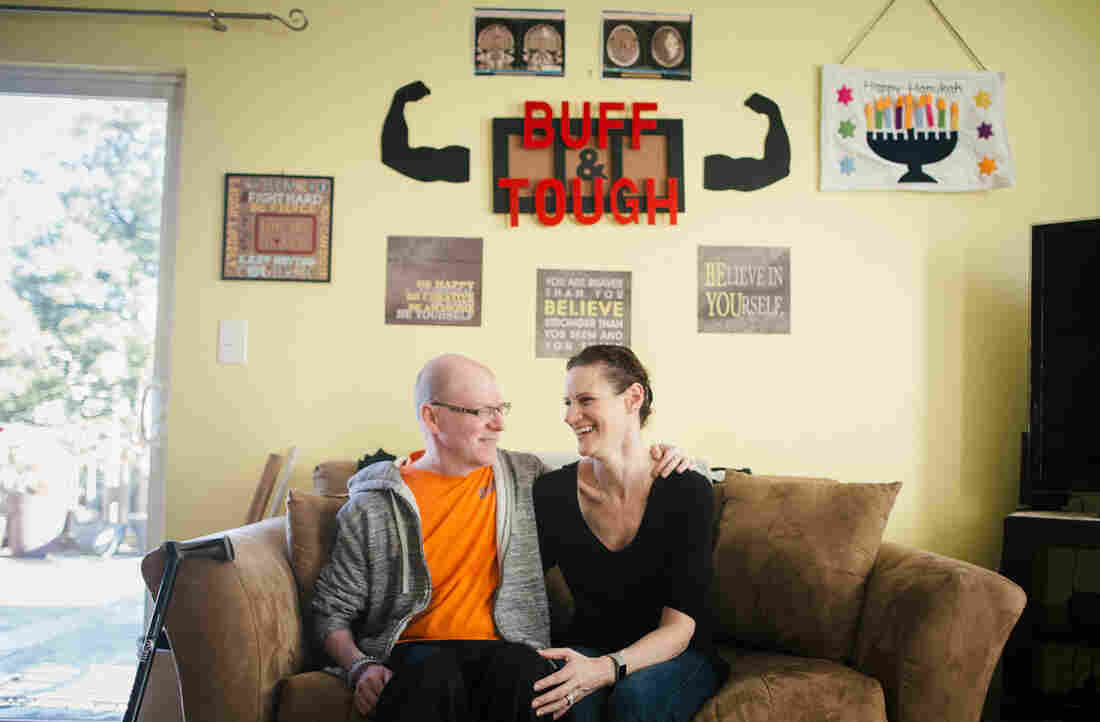 Ben and Tara Stern relax at home in Essex, Md. Ben was diagnosed with glioblastoma in 2016. After conventional treatment failed to stop the tumor, Ben tried an experimental drug. Meredith Rizzo/NPR hide caption 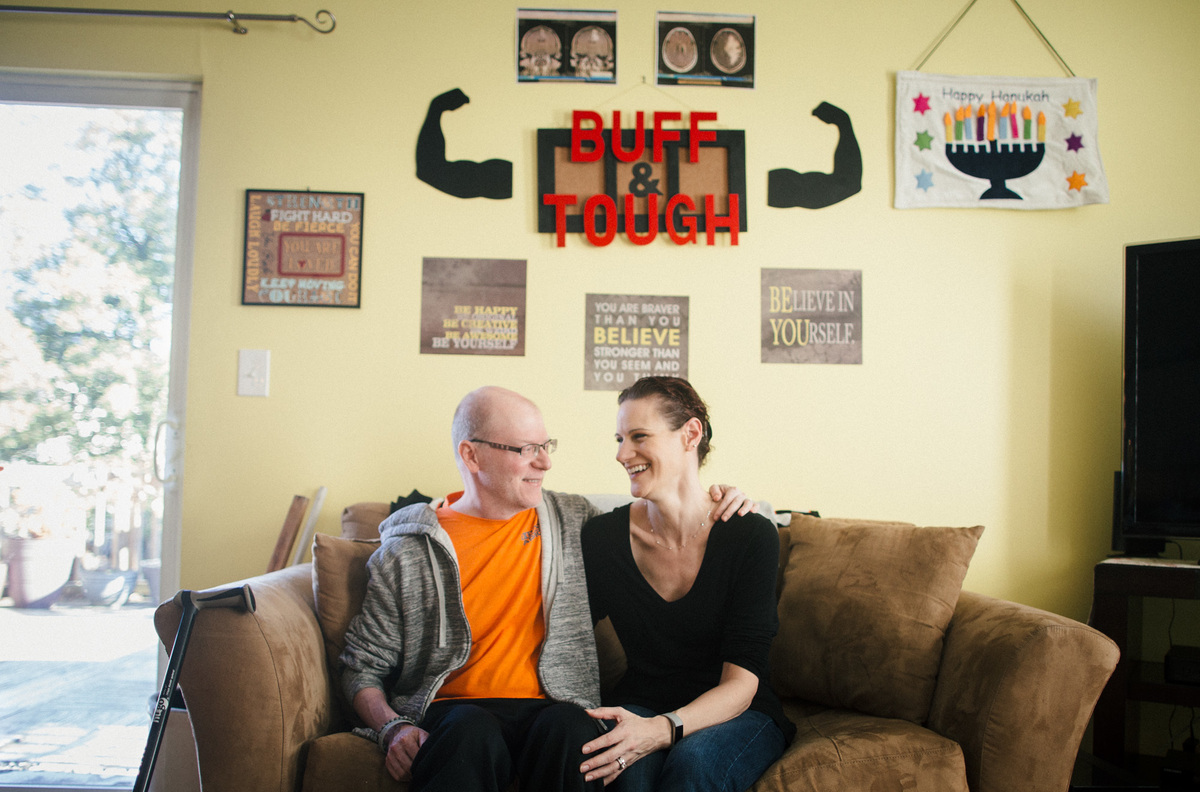 Ben and Tara Stern relax at home in Essex, Md. Ben was diagnosed with glioblastoma in 2016. After conventional treatment failed to stop the tumor, Ben tried an experimental drug.

People diagnosed with cancer understandably reach for the very best that medical science has to offer. That motivation is increasingly driving people to ask to have the DNA of their tumors sequenced. And while that's useful for some malignancies, the hype of precision medicine for cancer is getting far ahead of the facts.

It's easy to understand why that's the case. When you hear stories about the use of DNA sequencing to create individualized cancer treatment, chances are they are uplifting stories. Like that of Ben Stern.

In the spring of 2016, Stern was diagnosed with a deadly brain cancer, glioblastoma. His doctors at the Sidney Kimmel Comprehensive Cancer Center at Johns Hopkins promptly treated him with surgery, then over the months, chemotherapy and radiation. He even got on a clinical trial to see if a leading edge drug called a checkpoint inhibitor would work.

Ben Stern found out abruptly that wasn't doing the trick either, when he was struck with a seizure. "My whole right side clenched up and [my wife] Tara had called 911 in the middle of it."

The tumor had grown back, so surgeons went in again to remove what they could. Tara said the next month's appointment showed the surgery hadn't worked, either.

"The tumor had already grown back and it was already bigger than the original size tumor that we had found the previous May," Tara Stern says. This staggering regrowth took only five weeks.

The Sterns hang up images of Ben's brain tumor, shown on the right (white) in each image, and also five weeks after treatment. Meredith Rizzo/NPR hide caption

The Sterns hang up images of Ben's brain tumor, shown on the right (white) in each image, and also five weeks after treatment.

Stern's doctor got a sample of the tumor and sent a genetic analysis of it to what Hopkins calls its "molecular tumor board." It's a small group of doctors who meet Mondays to review these genetic tests. They found an overactive gene in his tumor that's only rarely associated with brain cancer. But that mutation in other cancers sometimes responds to a particular drug. So Ben went on it as part of his ongoing treatment.

"He started his next round of chemotherapy that Monday but he didn't seem to get weaker," Tara says, "He was getting stronger almost every day. It was almost miraculous."

Ben says the drug even reversed his deteriorating mental state brought on by the brain tumor. At the next monthly appointment, following a brain scan, Ben and Tara got more good news.

"The tumor was immeasurable on that next MRI," Tara says. "It wasn't there, to put it bluntly."

Ben's eyes well up as he hears his wife telling the story. "I was basically as I am now, which is in tears."

Eight months later, Ben was thinking ahead about his future, rather than wondering whether his life is ending. 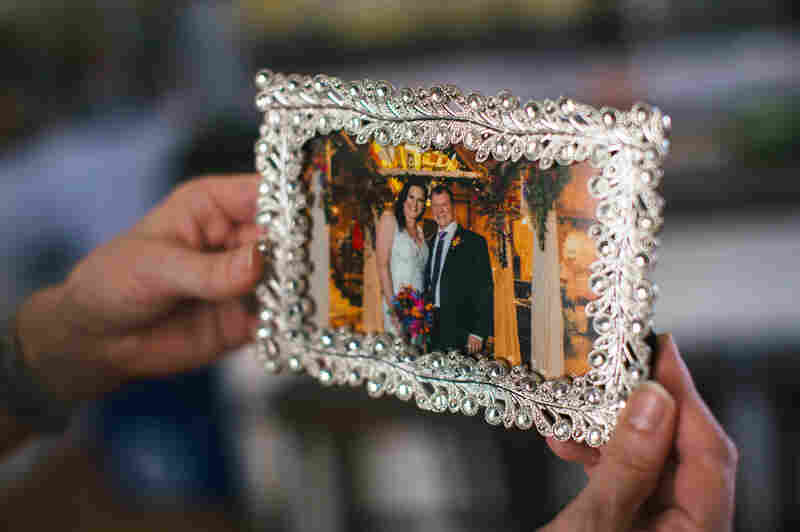 Ben and Tara on their wedding day in 2015. The next year, Ben was diagnosed with a brain tumor. Meredith Rizzo/NPR hide caption 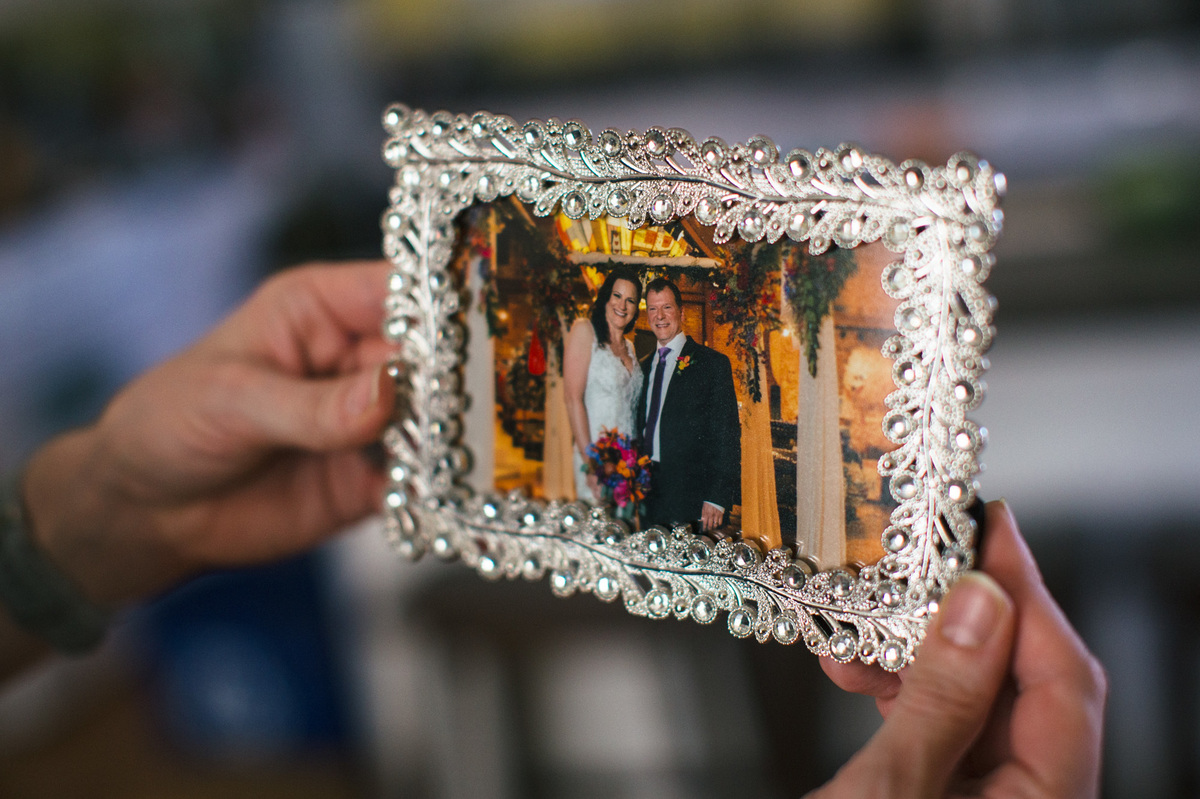 Ben and Tara on their wedding day in 2015. The next year, Ben was diagnosed with a brain tumor.

"We have to use this result with caution because we don't know how long this effect might wear on, but for the time being this is a clinically very meaningful benefit," says his doctor at Hopkins, medical oncologist Matthias Holdhoff.

And while it's a good-news story for the field of precision medicine, it is also not the way most of these stories end.

"We're getting better, but like many things in life, there's hope and hype. And that's also the reality with precision medicine right now," says Ben Park, an oncology professor at the Sidney Kimmel Comprehensive Cancer Center at Hopkins. After noticing how much confusing genetic information was flooding doctors at Hopkins, he founded the molecular tumor board there.

"The reason I started this tumor board [in 2013]... was simply because there was a patient, a young woman who had metastatic breast cancer who had a mutation on one of these reports and decided to forego standard-of-care therapies, which have been proven to actually prolong life in this setting," Park says. Instead, the woman enrolled in a clinical trial that didn't really make sense for her particular type of cancer and "she almost died. She had really bad toxicity from the experimental drug."

She was drawn, Park says, by the allure of precision medicine. Patients and doctors alike are clamoring for these tests. But interpreting the results isn't easy because different companies offer these tests and interpret the DNA signatures differently, "and that can make a huge difference," Park says.

"That's where we're having difficulty right now as a field," he says, harmonizing test results that often disagree with each other. 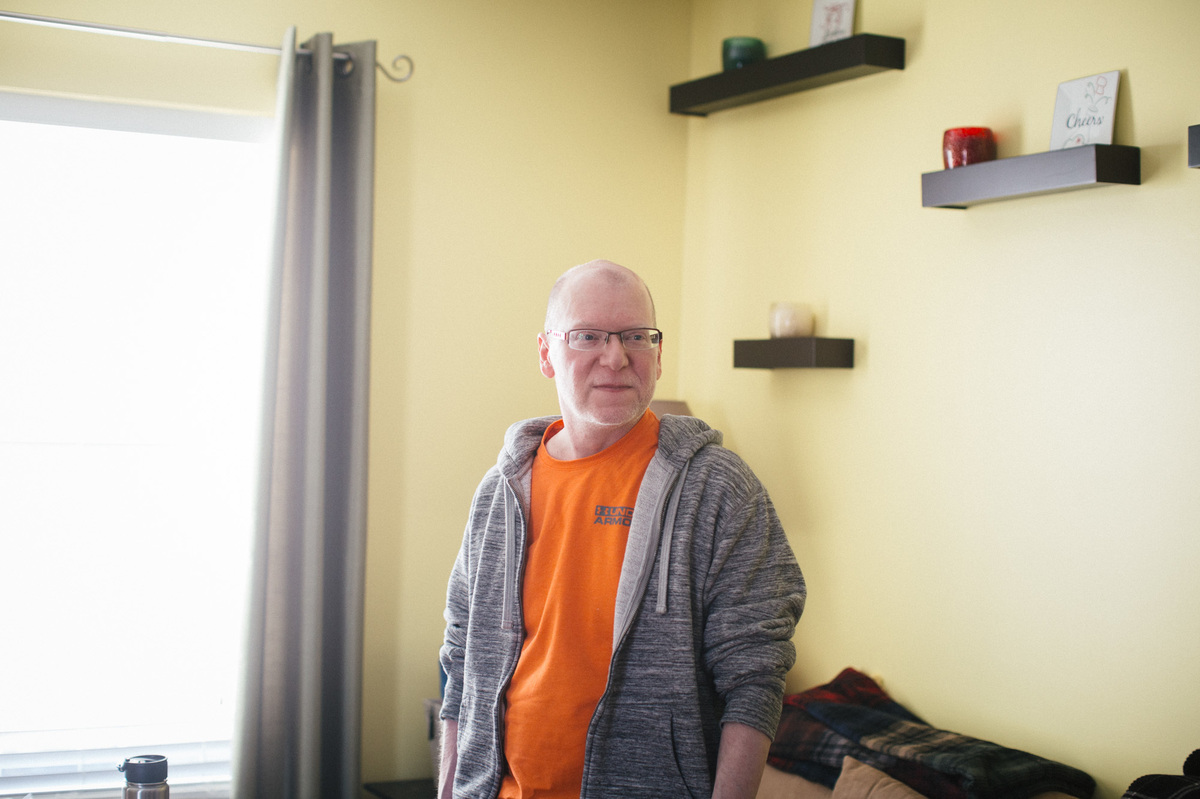 At Hopkins, the genomic tests usually don't offer any suggestion for treatment. Only about one quarter of patients at Hopkins are steered toward particular drugs or toward ongoing clinical trials. Other top medical centers find they can identify potential treatments only about 10 percent of the time.

So far there's only been one randomized study of this approach to precision cancer care — and it did not show a survival advantage for people who went through all this genetic testing.

"If you have this knowledge, it's not enough," Park says. "You have to prove that acting on that knowledge — some medical intervention — will actually afford benefit for patients. That's the trickiest, toughest part about looking at all these types of genomic tests, to really prove that this is making a difference in the lives of our patients."

Park has since passed on leadership of the molecular tumor board to his colleague, oncologist Josh Lauring. Lauring says there are a few cancers where DNA analysis does make a clear difference, say in melanoma and certain types of lung cancer. 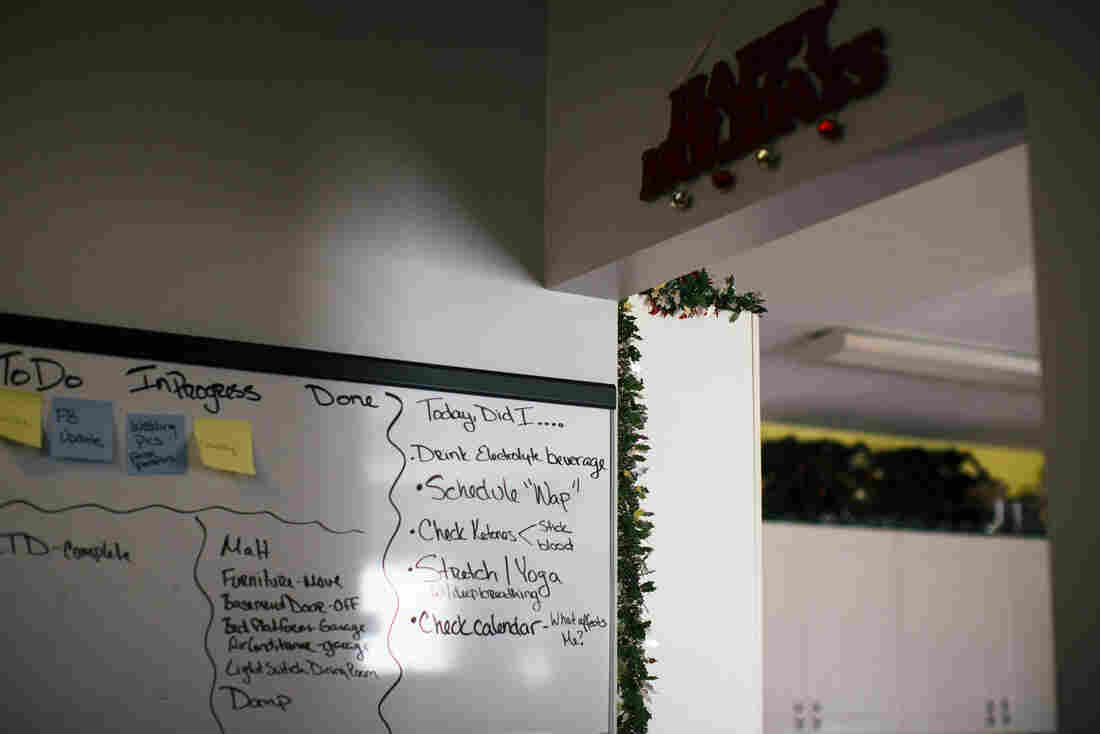 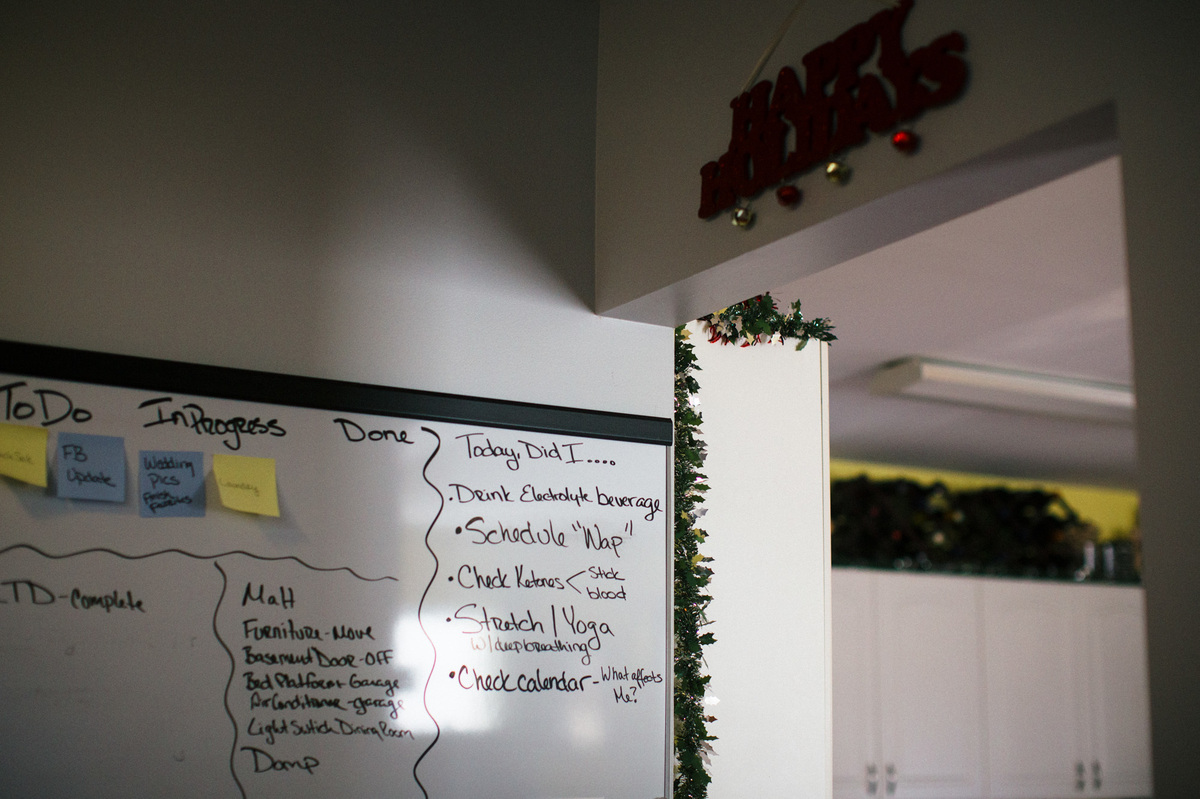 Tara keeps detailed notes of Ben's progress and also keeps track of his treatment schedule on a daily basis.

"In other cancers, it's really kind of an open question. At the same time, this testing is available commercially as well as at academic medical centers, and is being done. Patients want it, providers want it."

So what's happening, in effect, is a huge, unorganized experiment, involving real patients, treated differently in all sorts of settings. Lauring and colleagues at Hopkins are trying to keep track of all their patients: what treatment they got, how long it was successful, and how long the patients lived.

"We think it's really important to capture that information as well, to try to learn from it," Lauring says, "because in many cases it's not going to be effective, but in some it is, and it's important for us to figure that out."

Therapies that target specific genetic patterns are appealing because medical scientists have some sense of the biology underlying their drugs — they aren't just killing fast-growing cells, as conventional chemotherapy does.

"Unfortunately in many cases these responses, if they occur, are relatively brief."

That unfortunately turned out to be the case for Ben Stern as well. Five months after his remarkable response, Ben started feeling weaker again. An MRI suggested the cancer might be on the move. So he went back to the hospital for another round of chemotherapy and radiation.

They're hoping for the best.