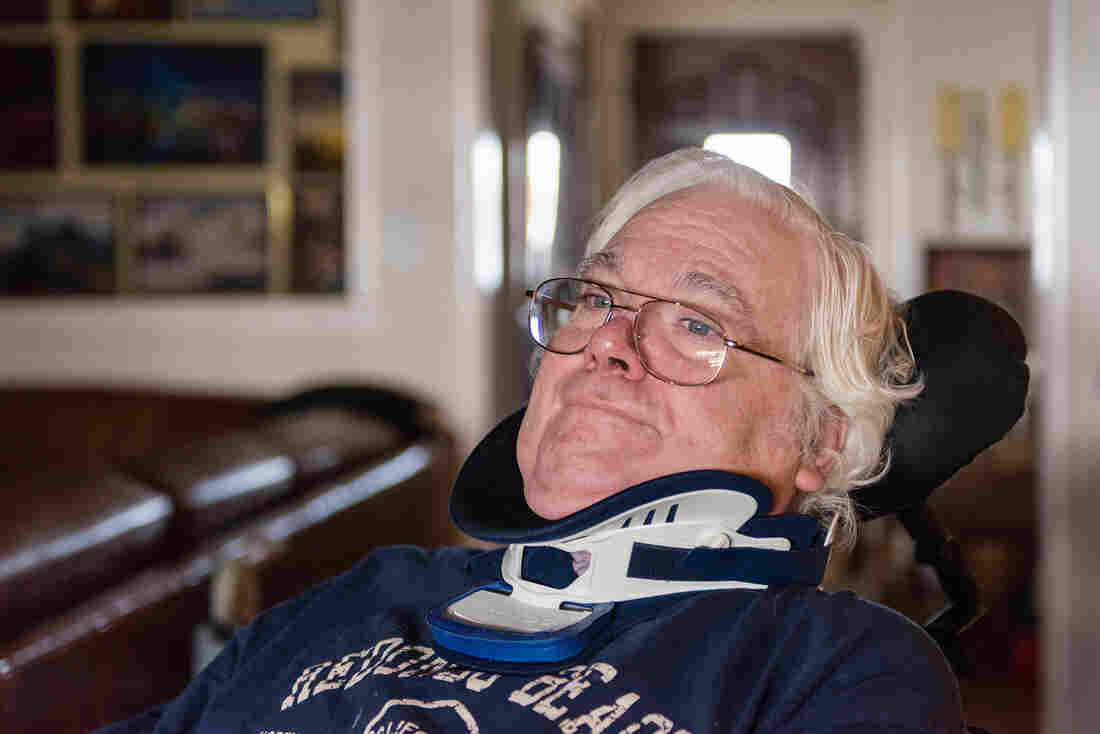 Colin Campbell, shown last month in his home near Los Angeles, was diagnosed with Lou Gehrig's disease — ALS — eight years ago. He gets Medicare because of his disability, but was incorrectly told by several agencies that he couldn't use it for home care. Instead, he pays $4,000 a month for those services. Heidi de Marco/Kaiser Health News hide caption 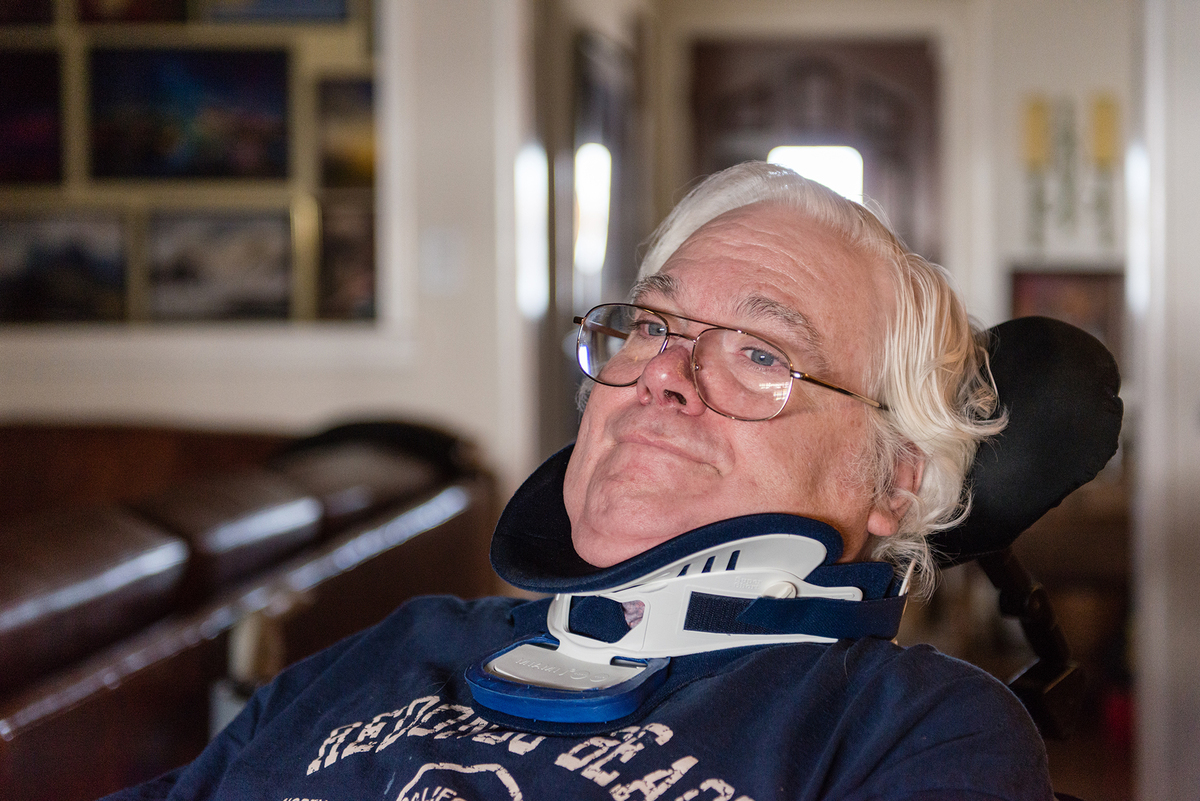 Colin Campbell, shown last month in his home near Los Angeles, was diagnosed with Lou Gehrig's disease — ALS — eight years ago. He gets Medicare because of his disability, but was incorrectly told by several agencies that he couldn't use it for home care. Instead, he pays $4,000 a month for those services.

Colin Campbell needs help dressing, bathing and moving between his bed and his wheelchair. He has a feeding tube because his partially paralyzed tongue makes swallowing "almost impossible," he says.

Campbell, 58, spends $4,000 a month on home health care services so he can continue to live in his home just outside Los Angeles. Eight years ago, he was diagnosed with amyotrophic lateral sclerosis, or Lou Gehrig's disease, which relentlessly attacks the nerve cells in his brain and spinal cord and has no cure.

Because of his disability, he has Medicare coverage, but he can't use it for home care — as the former computer systems manager has been told by 14 home health care providers.

That's an incorrect but common belief. Medicare does cover home care services for patients who qualify but, according to advocates for seniors and the home care industry, incentives intended to combat fraud and reward high quality care are driving some home health agencies to avoid taking on long-term patients, such as Campbell, who have debilitating conditions that won't get better. Rule changes that took effect this month could make the problem worse.

"We feel Medicare coverage laws are not being enforced and people are not getting the care that they need in order to stay in their homes," says Kathleen Holt, an attorney and associate director of the Center for Medicare Advocacy, a nonprofit, nonpartisan law firm. The group is considering legal action against the government. 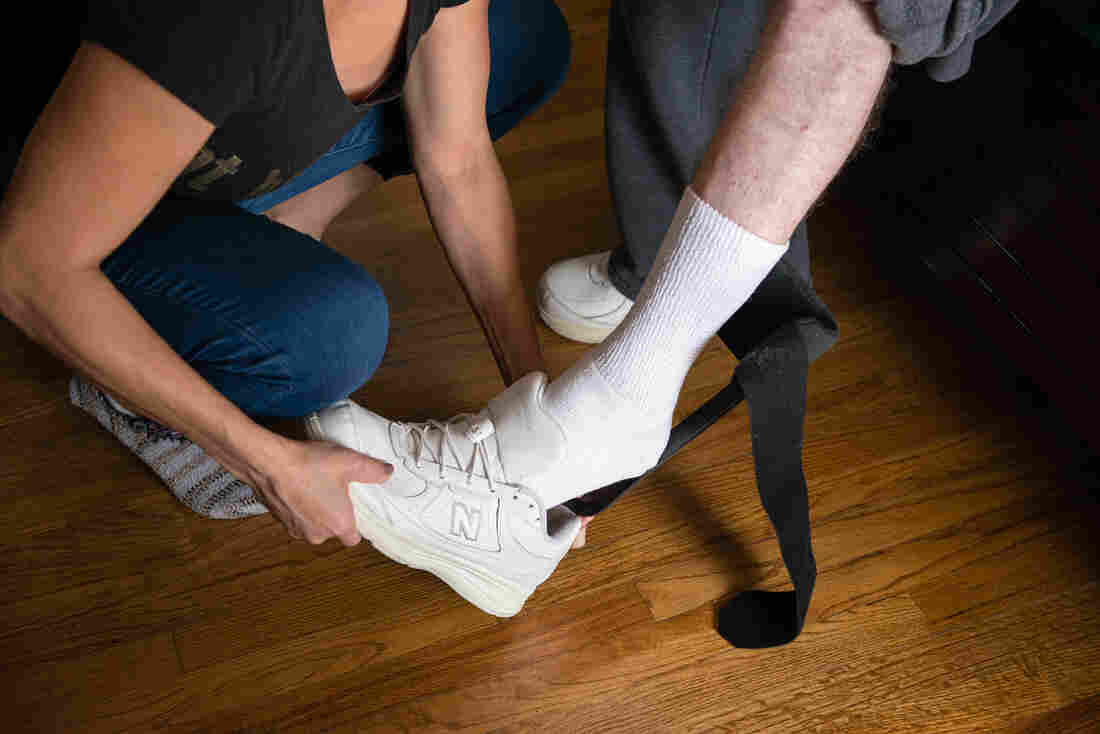 Because of his ALS, Colin Campbell needs to wear a brace, and he relies on help from a home health worker to get bathed and dressed every day. Heidi de Marco/Kaiser Health News hide caption 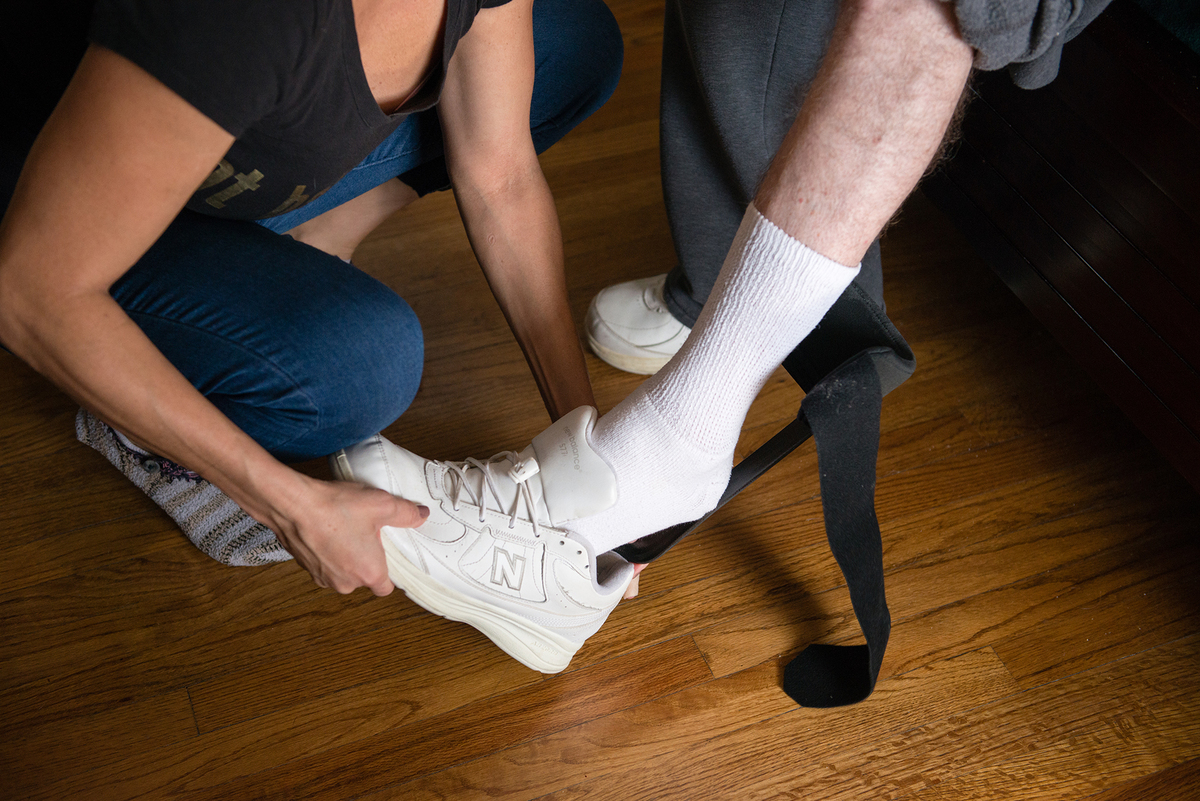 Because of his ALS, Colin Campbell needs to wear a brace, and he relies on help from a home health worker to get bathed and dressed every day.

Federal law requires Medicare to pay indefinitely for home care — with no copayments or deductibles — if a doctor ordered it and patients can leave home only with great difficulty. They must need intermittent nursing, physical therapy or other skilled care that only a trained professional can provide. They do not need to show improvement.

Those who qualify can also receive an aide's help with dressing, bathing and other daily activities. The combined services are limited to 35 hours a week.

Medicare affirmed this policy in 2013 when it settled a key lawsuit brought by the Center for Medicare Advocacy and Vermont Legal Aid. In that case, the government agreed that Medicare covers skilled nursing and therapy services — including those delivered at home — to maintain a patient's abilities or to prevent or slow decline. It also agreed to inform providers, those who audit bills, and others that a patient's improvement is not a condition for coverage. 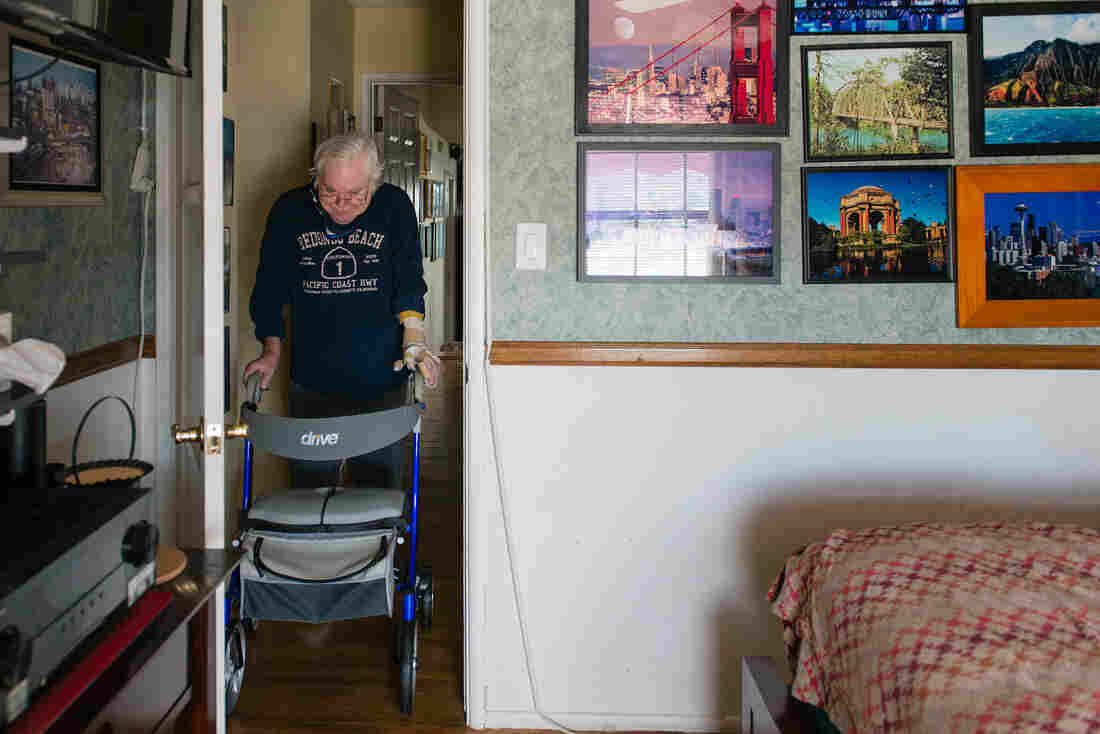 Campbell is able to move around his house with the help of a walker. Heidi de Marco/Kaiser Health News hide caption 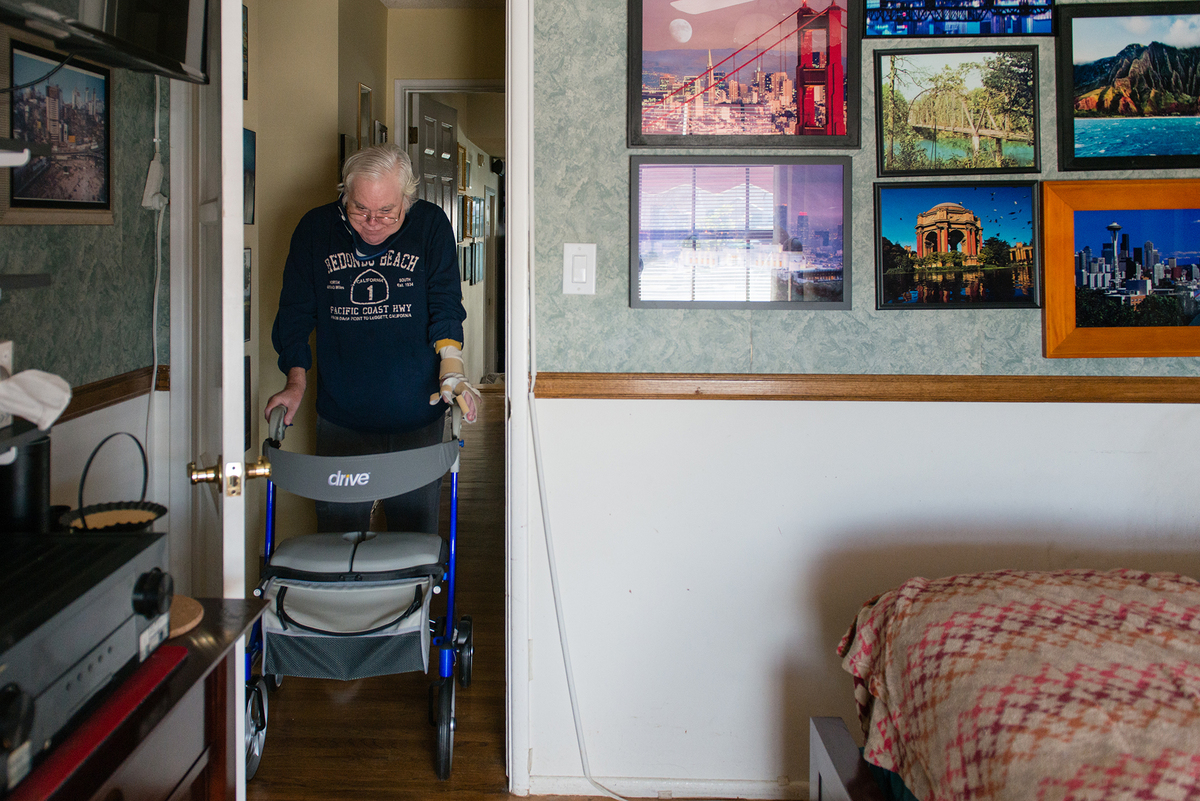 Campbell is able to move around his house with the help of a walker.

Securing Medicare coverage for home health services requires persistence, says John Gillespie, whose mother has gone through five home care agencies since she was diagnosed with ALS in 2014. He successfully appealed Medicare's decision denying coverage, and afterward Medicare paid for his mother's visiting nurse as well as speech and physical therapy.

"You have to have a good doctor and people who will help fight for you to get the right company," says Gillespie, of Orlando, Fla. "Do not take no for an answer."

Yet a Medicare official did not acknowledge any access problems. "A patient can continue to receive Medicare home health services as long as he/she remains eligible for the benefit," says spokesman Johnathan Monroe.

A leading industry group contends that Medicare's home health care policies are often misconstrued. "One of the myths in Medicare is that chronically ill individuals are not qualified for coverage," says William Dombi, president of the National Association for Home Care and Hospice, which represents nearly half of the nation's 12,000 home care providers.

Part of the problem is that some agencies fear they won't be paid if they take on patients who need their services for a long time, Dombi says. Such cases can attract the attention of Medicare auditors who can deny payments if they believe the patient is not eligible, or they suspect billing fraud. Rather than risk not getting paid, some home health agencies "stay under the radar" by taking on fewer Medicare patients who need long-term care, Dombi says.

And those companies may have a good reason to be concerned. Medicare officials have found that about a third of the agency's payments to home health firms in the fiscal year ending last September were improper.

Shortages of home health aides in some areas might also lead an overburdened agency to focus on those who need care for only a short time, Dombi says.

Another factor that may have a negative effect on chronically ill patients is Medicare's Home Health Compare ratings website. It includes grades on patient improvement, such as whether a client got better at walking with an agency's help. That effectively tells agencies who want top ratings "to go to patients who are susceptible to improvement," Dombi says.

This year, some home care agencies will earn more than just ratings. Under a Medicare pilot program, home health firms in nine states will start receiving payment bonuses for providing good care and those who don't will pay penalties. Some criteria used to measure performance depend on patient improvement, Holt says.

Another new rule, which took effect last Saturday, prohibits agencies from discontinuing services for Medicare and Medicaid patients without a doctor's order. But that, too, could backfire.

"This is good," Holt says. "But our concern is that some agencies might hesitate to take patients if they don't think they can easily discharge them."

This article was written with the support of a journalism fellowship from New America Media, the Gerontological Society of America and the Silver Century Foundation. Kaiser Health News (KHN) is a nonprofit news service. It's an editorially independent program of the Kaiser Family Foundation, and not affiliated with Kaiser Permanente. You can find Susan Jaffe on Twitter @susanjaffe.