Accessibility links
CTE In Athletes Linked To Hits To The Head, Even Without Concussions : Shots - Health News Scientists believe they have solid evidence that repeated direct hits to the head can cause the degenerative brain disease seen in some athletes, even if there are no signs of concussion. 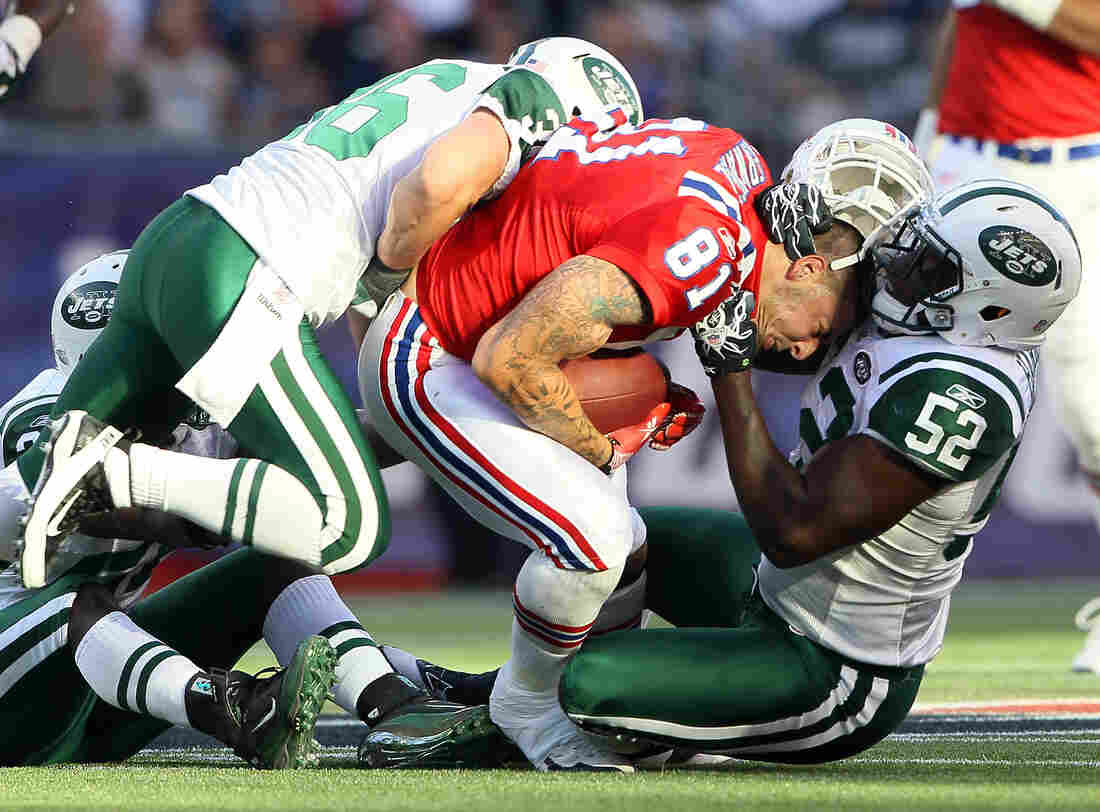 Aaron Hernandez (81), of the New England Patriots, lost his helmet during this play against the New York Jets in 2011. Hernandez killed himself in 2017, and researchers found that he had had one of the most severe cases of CTE ever seen in someone his age. Elsa/Getty Images hide caption 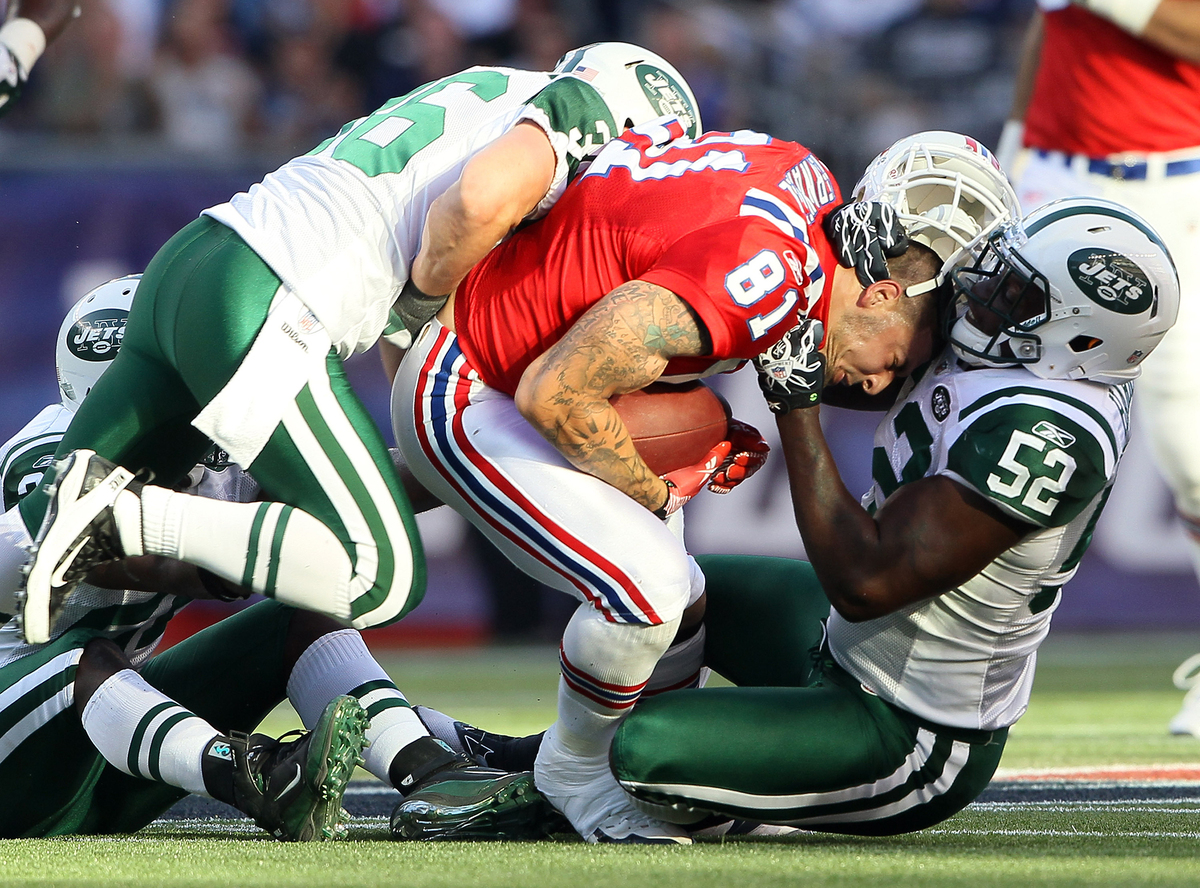 Aaron Hernandez (81), of the New England Patriots, lost his helmet during this play against the New York Jets in 2011. Hernandez killed himself in 2017, and researchers found that he had had one of the most severe cases of CTE ever seen in someone his age.

We live in an age of heightened awareness about concussions. From battlefields around the world to football fields in the U.S., we've heard about the dangers caused when the brain rattles around inside the skull and the possible link between concussions and the degenerative brain disease chronic traumatic encephalopathy.

A number of high-profile NFL stars have developed CTE, and parents are increasingly worried about how concussions may affect their children who play sports. The injury even has become part of popular culture, thanks to the 2015 film Concussion.

But now a high-powered team of researchers says all that focus on concussions may be missing the mark.

It's really about hits

A study published online Thursday in Brain, a journal of neurology, presents the strongest case yet that repetitive hits to the head that don't lead to concussions —meaning no loss of consciousness or other symptoms that can include headaches, dizziness, vision problems or confusion — cause CTE.

"We've had an inkling that subconcussive hits — the ones that don't [show] neurological signs and symptoms — may be associated with CTE," says Dr. Lee Goldstein, an associate professor of psychiatry at the Boston University School of Medicine and the lead investigator on the study. "We now have solid scientific evidence to say that is so."

And this evidence, he says, leaves researchers "terrifically concerned."

"The concussions we see on the ballfield or the battlefield or wherever — those people are going to get attention," Goldstein says, "because it's obvious they've had some sort of injury. We're really worried about the many more people who are getting hit and getting hurt — their brain is getting hurt — but are not getting help because we can't see the evidence on the outside that their brain is actually hurt. It's a silent injury."

Translating Goldstein's concern to the football field, Chris Nowinski, who heads the Concussion Legacy Foundation, says, "We see the hard hits all the time, where a guy pops up and smiles and [signals] a first down, and [we think], 'OK, that hit was fine.' But what this study says is: No, that hit probably wasn't fine, and that poor guy can't feel the damage that's happening in his brain right now."

Tracking hits to the head instead

Goldstein says about 20 percent of known cases of CTE had no record or report of concussion.

"It suggested that maybe concussion isn't the index or metric that we should be following," he says. "Rather, maybe it's something about the hits and number of hits that might be important. That's what we wanted to nail here."

The study was seven years in the making and involved researchers from Boston University, Cleveland Clinic, Harvard Medical School, Lawrence Livermore National Laboratory in California, Ben-Gurion University of the Negev in Israel and Oxford University in the U.K.

The researchers analyzed human brains — from teenagers and young adults who had been exposed to mild head impact but died from another cause soon after. They found early evidence of brain pathology consistent with what is seen in CTE, including abnormal accumulation of tau protein. CTE is a neurodegenerative disease characterized by that kind of abnormal accumulation around small blood vessels in the brain. The disease can cause brain cell death, cognitive deficits and dementia.

"It took us many years to do this," Goldstein says. "We see in our animals — even after a small number of hits, even one — very early evidence of pathologies associated with CTE."

And, they noted, the brain pathology was unrelated to signs of concussion in the mice, such as altered arousal and impaired balance. Goldstein says the scientists nailed what they wanted to — strong evidence linking head impact to CTE, independent of concussion.

Still, concussion is part of the picture

While the study downplays the role of concussions in the ultimate development of CTE, the familiar symptoms — headaches, fogginess or problems with concentration, memory, balance and coordination, even without a loss of consciousness, are still important signs the brain has been hurt.

"I want to be very clear on this," Goldstein says. "This is in no way to minimize concussions."

Nowinski, from the Concussion Legacy Foundation, is a former high school and college football player who says that even now, at 39, he deals with symptoms of acute post-concussion syndrome, including lingering headaches, sleepwalking and nausea during intense exercise.

"We're not taking concussions out of the equation," Nowinski says. "Concussions are still very bad." They can still cause acute brain injury that leads to long-term symptoms, he says, independent of whether they spark a neurodegenerative disease.

"We still have to respect and address [concussions], even more than we have in the past."

Pushing the science ahead

Dr. Julian Bailes isn't a household name. Not like, say, actor Alec Baldwin. But the two are linked on this issue — Baldwin played Bailes in the movie Concussion. Bailes chairs the department of neurosurgery at NorthShore University Health System in the Chicago area; he wasn't involved with Goldstein's study, but followed the work and calls it "good science."

"It's a comprehensive study," he says, "and I believe it adds a lot to our knowledge and the medical literature concerning this topic." Bailes says the work dovetails with findings he and others published in 2013.

"We've known for a few years that it's not just the known or diagnosed concussions that may increase risk for [CTE]," Bailes says. "It's probably the exposure. It's how many hits to the head that have occurred and at what velocity and what extent."

He notes the first case of CTE for an NFL player, discovered by his colleague Dr. Bennet Omalu, was the late center Mike Webster who "played football 27 years and never had a known or diagnosed concussion."

Bailes thinks the study published Thursday adds to the evolving narrative about head impact and the long-term consequences. "It certainly adds to our science and our understanding," Bailes says. "And hopefully it adds to greater protection, greater safety and the ability for all ages to enjoy contact sports."

The NFL Players Association agrees, saying in a statement:

"We stood firm against an [expanded] 18-game schedule and insisted on changes to the work rules in 2011 to limit contact of all types to protect players, and this study reinforces we made the right decision. We have been in close touch with the researchers at Boston University, who are also members of our Mackey-White Health and Safety committee, and we will review this study carefully to consider future changes to improve the health and safety of our players."

Still, Goldstein and Nowinski aren't so sure young kids should be playing contact sports at all.

"The longer you play, and the earlier you start playing, you'll suffer more head hits [and put yourself at] greater the risk for CTE," Goldstein says. "That's what all the evidence [in the study] was suggesting."

For the past seven years, he has served as the volunteer chairman of the medical advisory committee for Pop Warner, one of the oldest and largest youth football organizations in the U.S.

Bailes doesn't believe the study offers evidence that early exposure to head hits makes a football player more likely to develop CTE. Six years ago, he notes, Pop Warner became the first football organization at any level to legislate against having head contact drills in practice. Since that time, from the NFL on down, Bailes says, there has been a marked reduction in styles of practice or techniques that lead to gratuitous head contact. And new rules at all levels have helped eliminate egregious open-field head hits or head targeting, he says.

"That's where the players become man-sized and run fast and have high velocity collisions and hundreds of them a year," Bailes says. As to the question of where to draw the line in terms of what age kids should start playing tackle football — "this study doesn't answer that," Bailes says. "There's been no answer to that question."

It's an individual choice, he believes; parents and kids need to consider the risks and benefits.

Bailes thinks playing football before the age of 14 or 15 can have many benefits.

And, he notes, everything is relative.

"There are about 10 people who drown every day in the U.S.," he says, citing statistics from the Centers for Disease Control and Prevention, "and we're not calling to outlaw swimming."

The debate over when or even if kids should play tackle football will continue as the science of head injury evolves.

Both Bailes and Goldstein are a big part of that evolution. Right now, CTE can only be diagnosed after death, but both scientists are working, independently of each other, on a test intended to detect CTE in living brains. Such a test would help determine how widespread the disease is and, beyond that, how to develop treatment.

In the meantime, Goldstein hopes his study finds applications not just in football, but in other sports, like soccer and lacrosse, where contact and collisions include hits to the head.

And beyond sports, Goldstein says, hits to the head affect the most vulnerable segments of society. He has a long list.

"Intimate partners who are having repetitive head injuries," he notes," domestic violence victims, homeless, children at risk, people in our prison systems. [With] all of these people, we need to take the focus off concussion and find out if they have injured brains."