Accessibility links
Saunas Are A Hot Trend That's Good For Your Health : Shots - Health News Sweating in a sauna feels good, and it's associated with health benefits including a lower risk of heart disease. But is that because of the heat, or because you're able to kick back and relax?

Saunas Are A Hot Trend, And They Might Even Help Your Health

Saunas Are A Hot Trend, And They Might Even Help Your Health 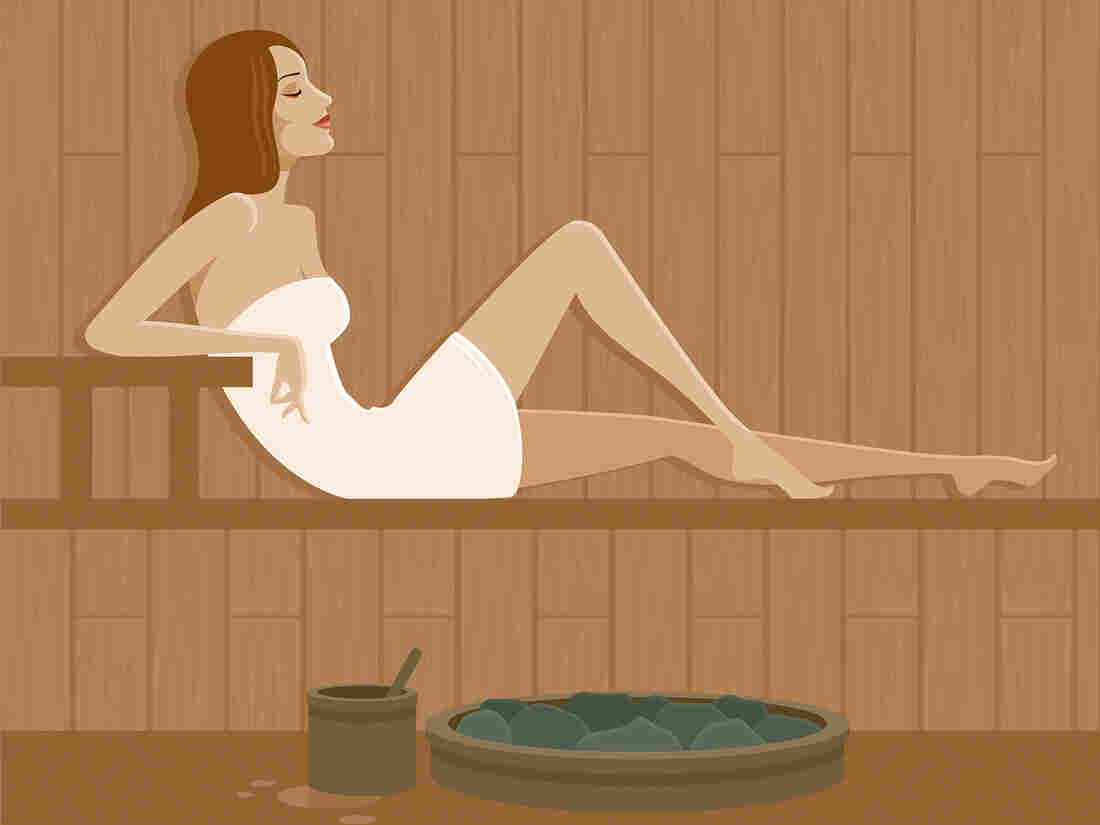 Is it the heat that makes you healthier? Or the chance to chill? bortonia/Getty Images hide caption 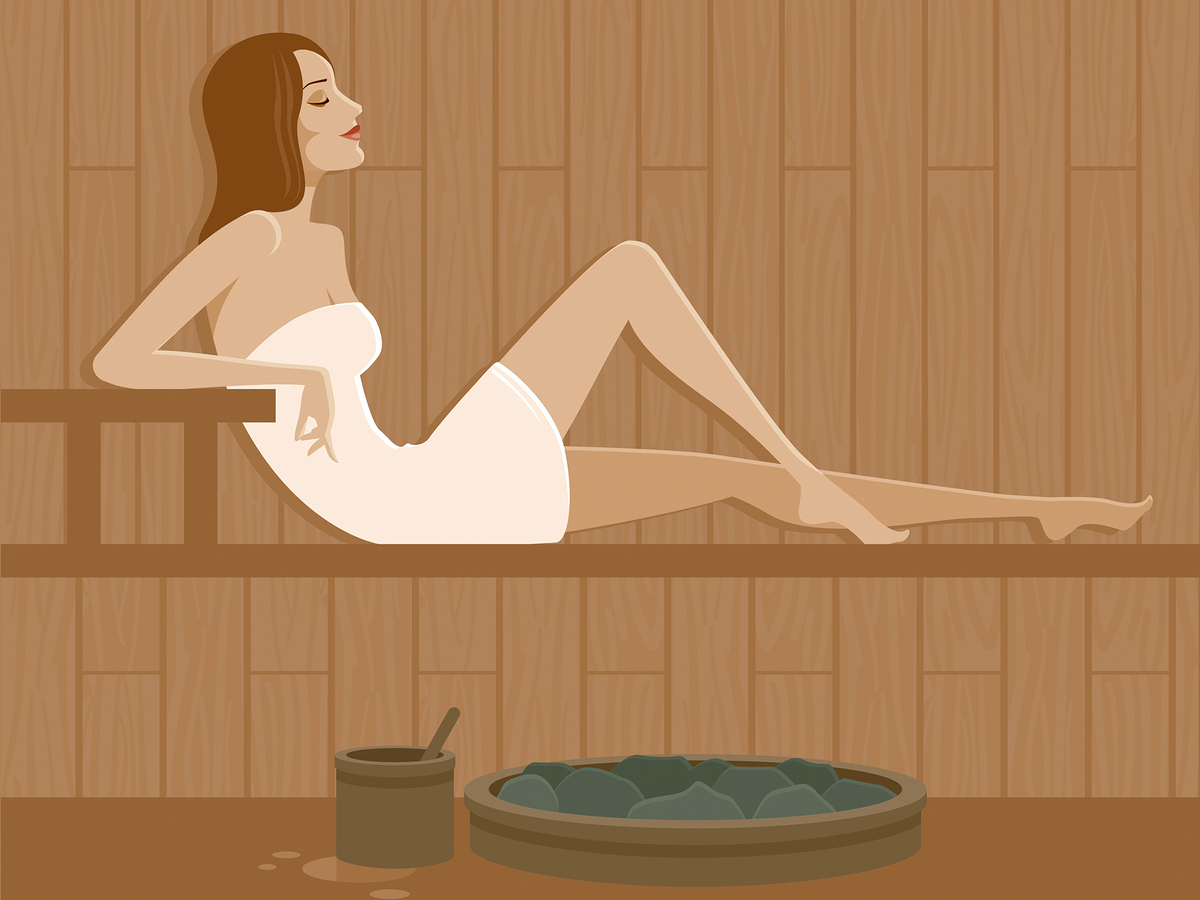 Is it the heat that makes you healthier? Or the chance to chill?

It's not even a month into winter, and the cold temperatures have already crushed my spirits. Bundling up every time I leave the house, unexpected school snow days, a sidewalk obstacle course of frozen dog poop: I'm over it. I find myself dreaming of not just spring but warmth in any form. So a sauna is sounding particularly good about now. And besides the respite from the cold, there are a host of claimed health benefits from regular sessions.

And indeed, research has shown an association between certain positive health outcomes and regular sauna use. A 2015 study covering more than 2,300 middle-aged men in Finland found the more frequently a man took a sauna, the lower his risk of fatal heart disease and early death. The same group of researchers has also reported an association between regular sauna use and a lower risk of high blood pressure, and between moderate to heavy use of saunas and a lower risk of dementia, among other benefits.

One caveat, besides the fact that the subjects were all men, is that saunas are so ingrained in the culture in Finland that it's hard to find anyone who doesn't use them. So there's no control group that used them not at all — only those who used them more or less frequently.

And with this type of study, it's not possible to know whether it's the sauna itself or some related factor, like the ability to afford time for frequent R&R, that is bringing the benefit. As Rita Redberg, a cardiologist at UCSF Medical Center, wrote in a JAMA Internal Medicine editor's note accompanying the 2015 study, "We do not know why the men who took saunas more frequently had greater longevity (whether it is the time spent in the hot room, the relaxation time, the leisure of a life that allows for more relaxation time or the camaraderie of the sauna)."

Tanjaniina Laukkanen, an author of those studies and a researcher at the University of Eastern Finland, tells Shots in an email that the team believes both heat and relaxation are important factors. Heart rate increases with full-body heat exposure. That helps improve cardiac output.

Saunas also seem to improve the function of the blood vessels. Christopher Minson, a professor of human physiology at the University of Oregon, studies the effects of heat — in his case, hot water immersion — on the human body. He says that like exercise, heat is a global stressor, with likely a host of beneficial mechanisms throughout the body. He's researching heat therapy for people who are unable to get the full benefits of exercise, such as people with spinal cord injuries.

This comparison to exercise doesn't mean you should skip working out if you're physically able to do it. Another study from Laukkanen's team suggests that there are some independent effects of cardiovascular exercise and sauna use, and that the men who were in good aerobic shape and frequently hit the sauna had better cardiovascular outcomes than those who only fit one of those categories.

So should we all be taking a regular sauna? Redberg's 2015 editor's note said that "clearly time in the sauna is time well spent." She elaborated in a recent email to Shots, saying that that study and subsequent ones show an association between sauna use and some positive health outcomes such as lower blood pressure and possible relief from musculoskeletal pain and headaches. Saunas are among the relaxing and stress-relieving activities she recommends to patients, including massage, yoga and Pilates. She also recommends physical activity, especially walking.

Of course, there are cautions. People who faint or who have low blood pressure might want to be careful, or at least drink a lot of water before and after, which is good advice for all sauna-goers. If you have unstable heart disease, you should be cautious and consult a doctor first.

And what about the infrared saunas that are trendy now?

How To Make Disease Prevention An Easier Sell

While traditional saunas heat up the surrounding air to about 185 degrees, which in turn heats you, infrared saunas (also called far-infrared saunas) only reach about 140 degrees, according to a 2009 review of evidence on infrared saunas and cardiovascular health. But the infrared rays penetrate more deeply into the body, which means you start sweating at a lower temperature than in a traditional sauna. That produces a lighter demand on the cardiovascular system, similar to moderate walking, according to the review, and so might benefit people who are sedentary for medical reasons. It's also good for people who like the idea of a sauna, but find the high heat unpleasant.

The review, which covered nine studies, found "limited moderate evidence" for improvement in blood pressure and symptoms of congestive heart failure with infrared saunas, and some limited evidence for improvement in chronic pain. Infrared saunas are also a part of waon therapy, used in Japan, which consists of 15-minute stints in the heat followed by 30 minutes of reclined rest, wrapped in a towel. (Sign me up!) Evidence suggests waon therapy can benefit people with heart failure.

Laukkanen says the group's work can't be applied directly to infrared saunas, and that more studies are needed to suss out their longer-term benefits. Whatever kind appeals to you, just don't think that you are "sweating out toxins" to the benefit of your health (a frequent marketing claim). Toxin removal is chiefly the job of the kidneys and liver, not your sweat.