Accessibility links
When A Tattoo Literally Means Life Or Death : Shots - Health News A gravely ill man arrives at the hospital, alone and unconscious, with a tattoo across his chest: "Do Not Resuscitate." It sparks deep conversation about end-of-life care in America. 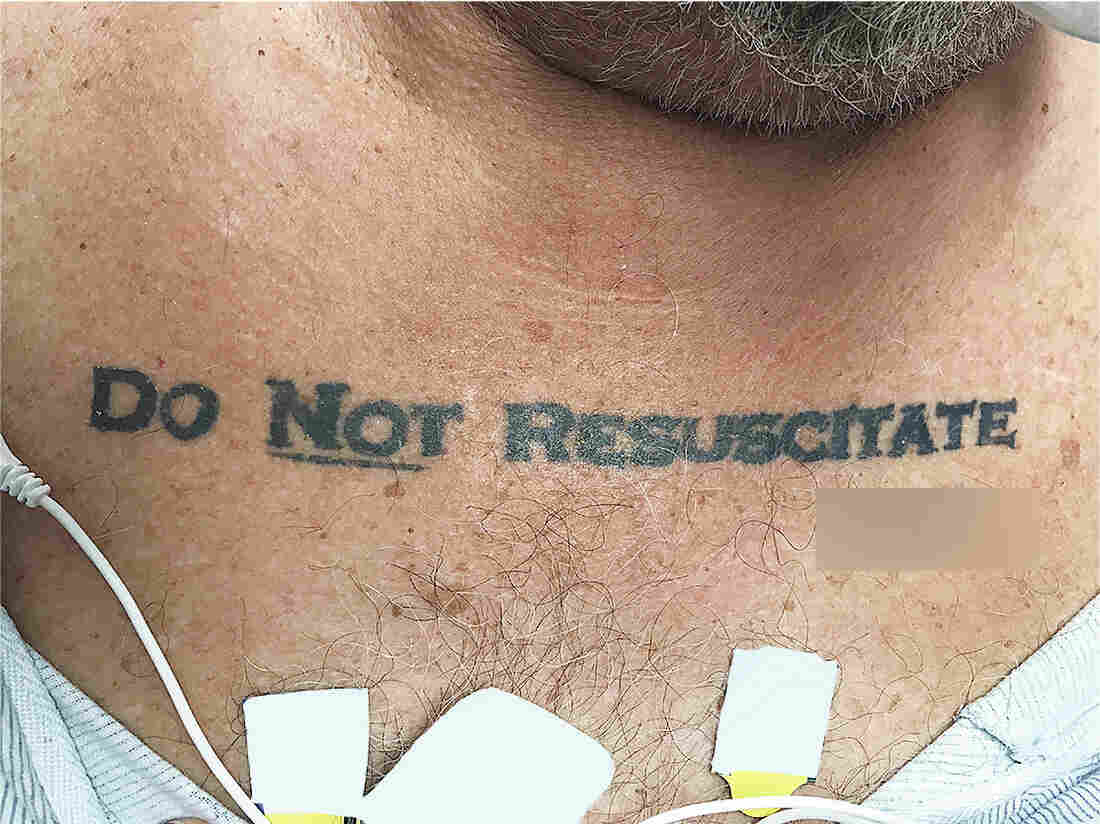 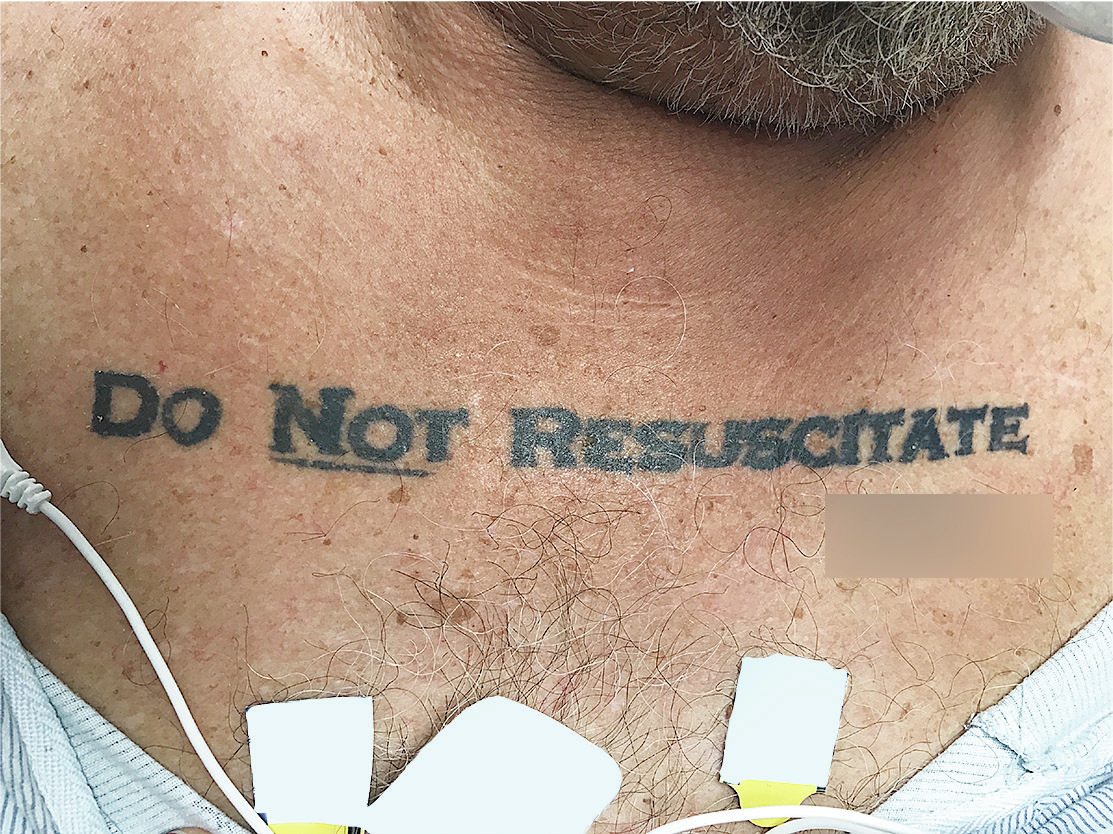 Doctors in Miami found that a man's tattoo expressing his end-of-life wishes was more confusing than helpful.

The man was unconscious and alone when he arrived at University of Miami Hospital last summer. He was 70 years old and gravely ill.

"Originally, we were told he was intoxicated," remembers Dr. Gregory Holt, an emergency room doctor, "but he didn't wake up."

"He wasn't breathing well. He had COPD. These would all make us start to resuscitate someone," says Holt. "But the tattoo made it complicated."

The tattoo stretched across the man's chest. It said "Do Not Resuscitate." His signature was tattooed at the end.

"We were shocked," remembers Holt. "We didn't know what to do."

The tattoo, and the hospital's decision about what it required of them, has set off a conversation among doctors and medical ethicists around the country about how to express one's end-of-life wishes effectively, and how policymakers can make it easier.

In the U.S., the standard way to tell doctors you want to be allowed to die is to sign an official form saying you don't want to be resuscitated. That means, among other things, you don't want doctors to do CPR or use a ventilator to keep you alive if you stop breathing.

But signing the official form doesn't guarantee your wishes will be followed. If you lose consciousness and end up in the emergency room, for example, the form may not come with you, in which case many doctors err on the side of intervening.

"A lot of doctors say, 'Look, you can always be dead later. Don't take a course that's irreversible,' " explains Dr. Kenneth Goodman, a longtime medical ethicist for the University of Miami hospital and the man Dr. Holt called when he saw the man's tattoo. It was his job to figure out the best course of action, and quickly — the man seemed to be dying.

"Our big concern was, is this real?" remembers Holt. The only previous example they could find in the medical literature was a case from 2012, in which a man with a chest tattoo that read "D.N.R." told doctors it was the result of a drunken bet, and that it didn't reflect his wishes.

And, even if this tattoo was real, it was initially unclear whether it should carry the same weight as an official form stating the same thing.

"My thoughts were these," explains Goodman. "He's gone through the trouble of getting this tattoo that says please don't do this to me, and he's probably seen it pretty frequently since then. I suppose every time one's looking in the mirror one would see this."

Goodman advised the doctors to take the tattoo seriously. The man got sicker and sicker overnight. They didn't do CPR. The man died. And social workers eventually found the man had an out-of-hospital form on file with the Florida Department of Health that backed up his tattoo.

Holt published a case study about the patient in The New England Journal of Medicine in November, thinking it might be helpful for other doctors. Since then, he and Goodman say they have heard from a wide range of doctors and ethicists.

"It started a good conversation" about how to help people express their end-of-life wishes in productive ways, Holt says. Tattoos, he and Goodman both say, are not the answer. Although the tattoo ultimately worked in this case, "the long and short of it is that I don't think it's a useful thing. It really gave us more pause than help," Holt says.

What would really be helpful is an easy way to access official forms from everywhere. Ideally, EMTs and ER docs could both know instantly what care an unconscious person wants.

"Imagine an ordinary patient who has a preference never to be resuscitated, and that is in her record," says Goodman. "Why then, that ought to be something you can call up anywhere." Some states have attempted to do that by establishing electronic registries for a type of directive called a POLST form, which is meant to be used by very old or sick people.

Oregon's registry has increased the odds that people get the care they want, and since California launched a pilot registry in 2016, some doctors say they have seen fewer patients who choose to wear their preferences on their bodies — etched in bracelets, mostly, not tattooed on their skin.