Accessibility links
Voters, Not Legislature, Could Determine How Oregon Pays For Medicaid : Shots - Health News Last summer, the Oregon Legislature passed a package of state taxes to cover Medicaid's expanding rolls. But Oregon voters Tuesday could throw a wrench in that plan by refusing some of the taxes. 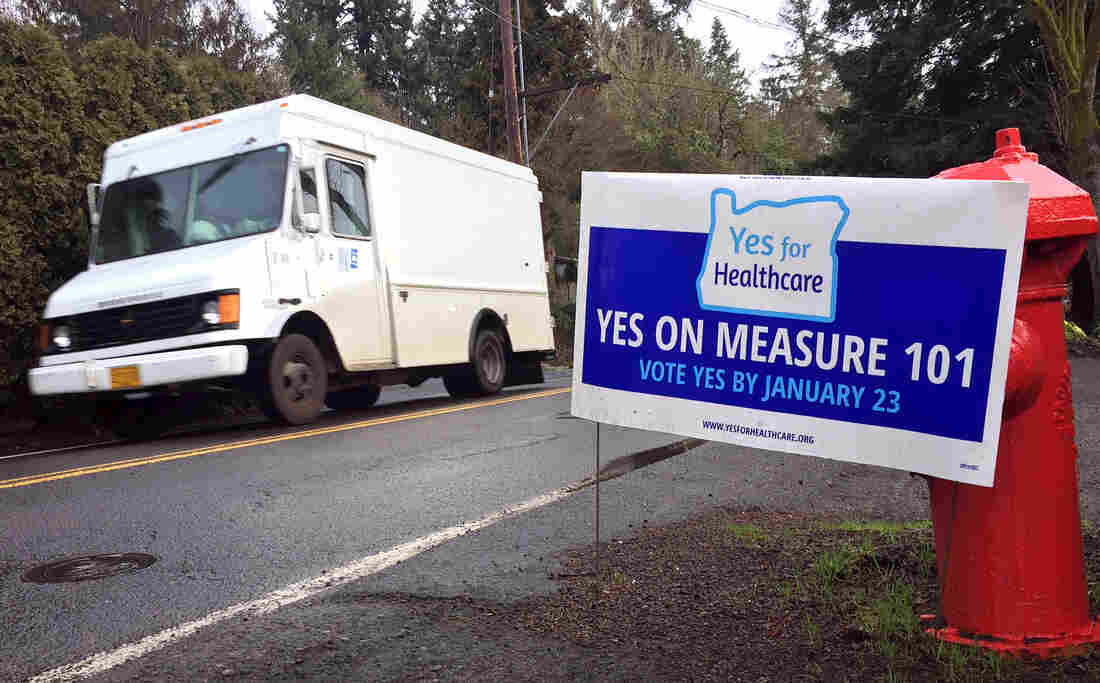 A sign in support of Oregon's Measure 101 is displayed by a homeowner along a roadside in Lake Oswego, Ore. Tuesday's special election puts decisions over how the state funds Medicaid in voters' hands. Gillian Flaccus/AP hide caption 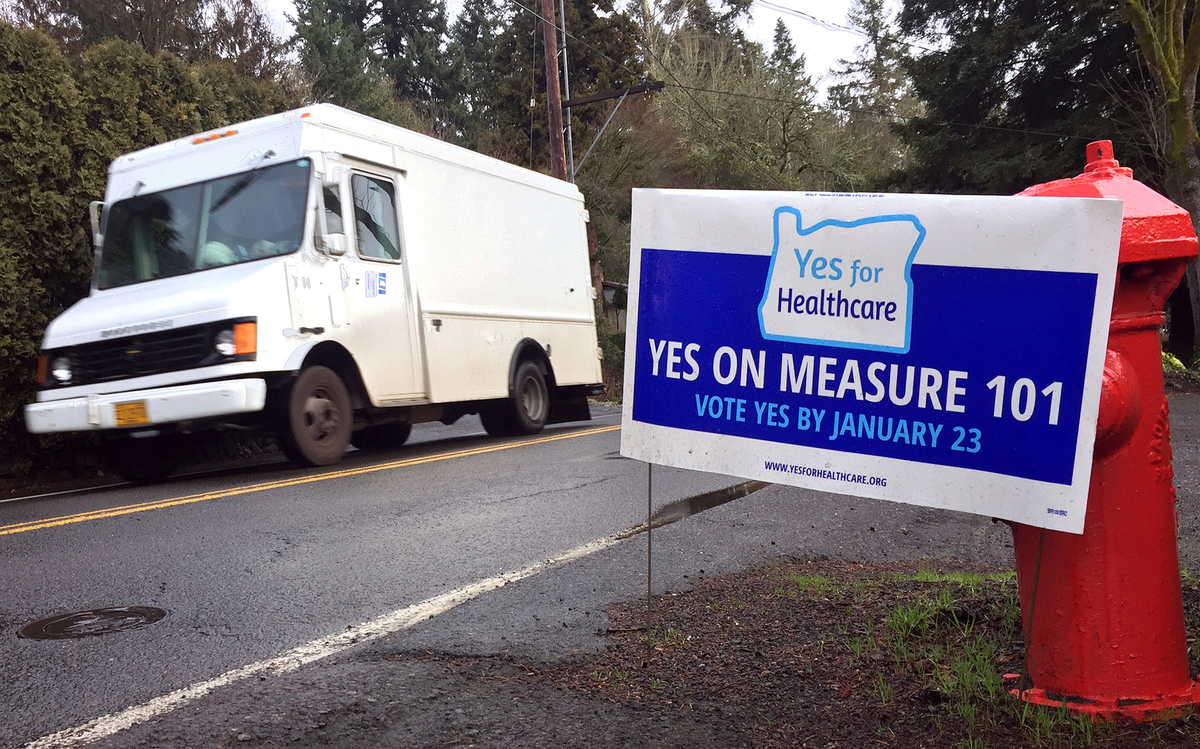 A sign in support of Oregon's Measure 101 is displayed by a homeowner along a roadside in Lake Oswego, Ore. Tuesday's special election puts decisions over how the state funds Medicaid in voters' hands.

Oregon is in a battle royal over how to pay for expanded Medicaid.

The fight revolves around Measure 101, a ballot initiative that you have to go back a few years to understand.

During the 1990s, Oregon's then-governor, John Kitzhaber, had a background in health care — he had worked as an emergency room doctor. His legacy in the state includes the expansion of health insurance for the poor, an idea he managed to sell to both Democrats and Republicans.

So when President Barack Obama proposed expanding Medicaid under the Affordable Care Act, Oregon lawmakers on both sides of the aisle embraced it. As a result, some 95 percent of Oregonians now have health insurance. That's among the highest rates in the nation.

But now the federal government is trimming its contribution to Medicaid. And legislatures all around the U.S. are scrambling to find money to replace those federal payments.

In Oregon last summer, Democrats joined with Republicans, hospital owners and health insurance CEOs to come up with a tax package that would fund the Medicaid expansion. And hospitals and insurance companies agreed to the plan, though they are on the hook for many of the included taxes.

Here's where the wrinkle comes: Under state law in Oregon, voters can use the initiative process to collect signatures and force a public vote on any new tax. And that's what state Rep. Julie Parrish did.

Parrish and others managed to get "Measure 101" on Oregon's Tuesday ballot — putting part of the Medicaid tax package passed last summer into the hands of voters. If it succeeds not much will happen — the tax package will continue to fund Medicaid expansion. But if it fails, Oregon's Legislature will have to go back to the drawing board and come up with a new way to pay for the health care of its poorest residents and others who rely on Medicaid.

Parrish is a Republican state legislator whose family was on Medicaid when she was a child.

"This is about a fundamental disagreement that taxing other people's insurance is the way to fund Medicaid," she says. Parrish says the funding package Oregon came up with is inequitable because it doesn't apply to big corporations and unions. Instead, she says, it hurts the little guy — people who couldn't afford to hire lobbyists.

"Small businesses — mom and pop businesses," she says, ticking off the groups she thinks would unfairly bear the tax burden under the state's plan. "Individuals who have to buy their own [health insurance]."

Parrish thinks Medicaid would be better-funded in Oregon with something like a cigarette tax increase — although it's not clear that would generate enough money or garner enough votes to pass.

Cedric Hayden, a Republican representative from Falls Creek, is a dentist who accepts Medicaid patients and runs a charitable health clinic in Lane County. He is also a member of Parrish's Stop Healthcare Taxes committee — the group that collected enough signatures to put Measure 101 on the ballot.

Hayden says if he and other members of his committee had been against funding Medicaid altogether, they could have insisted the Legislature's entire funding plan be put up for a public vote.

Instead, if approved, Measure 101 would ratify the Medicaid expansion in Oregon that the Legislature approved last summer. But if Measure 101 fails, a part of that tax package will be eliminated. A "no" vote would eliminate the 0.7 percent increase to an existing tax on hospitals that the Legislature wants. And it would also stop a 1.5 percent tax on health insurance contracts.

It's unclear how the passage of Measure 101 would affect consumers. That's because, on one hand, any new taxes would very likely be passed on to consumers. But on the other hand, Measure 101 funds a program that saves consumers of health care $300 a year.

Some Republicans in the state want a "no" vote. They don't like the new tax and they don't trust the Oregon Health Authority with the money. They say the OHA wasted millions of dollars on things like Medicaid overpayments and CoverOregon — the webpage that initially sold Obamacare insurance.

On the "yes" side are all kinds of advocacy groups and the vast majority of Oregon's health organizations. They say 48 other states have some form of this tax package to pay for Medicaid.

"The alternative of lack of coverage — we're talking kids, seniors, people with disabilities — is unacceptable," says Andy Van Pelt, the executive director of the Oregon Association of Hospitals and Health Systems.

He says it is cheaper to treat people with health insurance than to treat them without insurance, when they turn up sick in emergency rooms anyway.

"There's a real possibility that people could lose their coverage. It will just destabilize the Medicaid program for hundreds of thousands of people, and that would be utter chaos," Van Pelt says.

While the Trump administration hasn't managed to repeal the Affordable Care Act, it has taken several steps to dismantle it.