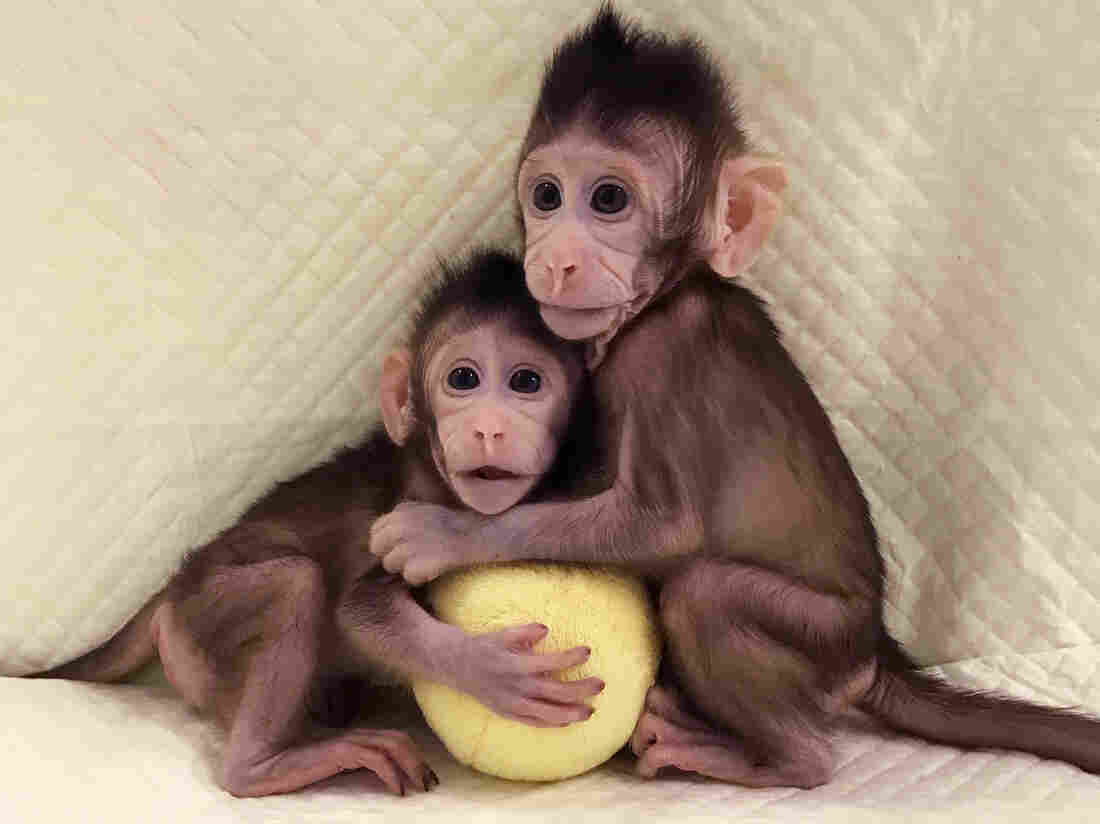 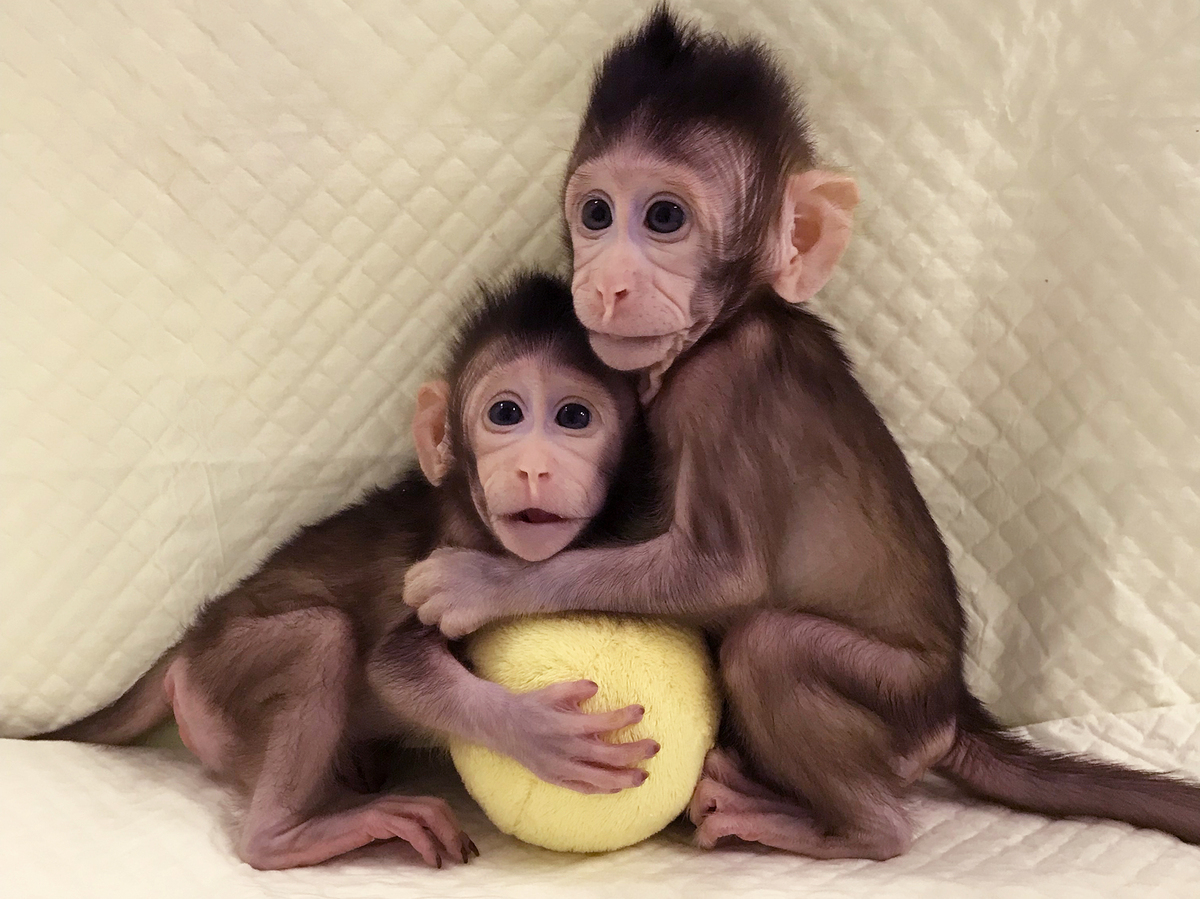 Zhong Zhong (left) and Hua Hua are the first primate clones made by somatic cell nuclear transfer, the same process that created Dolly the sheep in 1996.

Chinese researchers have finally figured out how to clone a primate, using the same technique Scottish researchers devised to clone the first mammal, Dolly the sheep, in the mid-1990s.

Scientists in Shanghai say they've produced two cloned macaque monkeys by taking the DNA from the nuclei of fetal monkey cells and putting the genes into monkey eggs that had their own DNA removed. The scientists then stimulated the eggs to develop into embryos, which were placed into the wombs of female surrogate monkeys to develop into baby monkeys. It's the first time the technology, called somatic cell nuclear transfer, has been used to clone any close relative of humans.

The researchers hope to use the advance to create genetically identical monkeys for medical research. They describe their work in the journal Cell.

"We're excited — extremely excited," Mu-ming Poo of the Chinese Academy of Sciences said. "This is really, I think, a breakthrough for biomedicine."

He sees a need to have "genetically identical monkeys for studying many human diseases, especially brain diseases" such as Alzheimer's, Huntington's and Parkinson's.

Other scientists agree the development could prove very useful.

"I think it's a very exciting landmark. It's a major advance," says Dieter Egli, a reproductive biologist at Columbia University. "It should be possible to make models of human disease in those monkeys and study those and then attempt to cure it."

But the step also raises concern that someone might try to use the same technique to clone humans, given the biological similarities between monkeys and humans.

"People may wonder: Are human beings next?" says Insoo Hyun, a bioethicist at Case Western Reserve University. "People have always been worried about the possibility of human cloning. And this is just yet another step in that direction."

The Chinese scientists acknowledge that any new technology can be abused. But they stress they have no interest in ever trying to clone a person. "Technically speaking one can clone human," Poo says. "But we're not going to do it. There's absolutely no plan to do anything on humans."

Ever since Scottish researchers cloned Dolly the sheep, scientists have attempted to use the same technique to clone other mammals. They've succeeded with many species, including mice, dogs, cows, horses and rabbits.

Researchers have also created cloned human embryos, even after earlier claims of doing so were determined to have been fraud. But that work was done to obtain human embryonic stem cells for research.

Despite decades of trying, no one had ever succeeded in using the same method used to create Dolly to clone a primate.

"It's been tried for so many years and it hasn't worked," says Shoukhrat Mitalipov, director of the Center for Embryonic Cell and Gene Therapy at the Oregon Health & Science University in Portland, Ore. "This time it worked, which is a big deal."

Poo's team succeeded by removing the DNA from fetal monkeys instead of using adult cells as a starting point. The scientists then transferred the genes into monkey eggs that had had their own DNA removed.

The next step was also crucial, Poo says. The researchers stimulated the eggs to develop into embryos with a new mix of chemical signals. "The trick is we choose the right chemicals to turn on these genes we transfer into the egg," Poo says. "So that's what we did different. I think that's the key."

The researchers then transplanted the cloned monkey embryos into surrogate female monkeys.

Two baby macaque monkey clones were born six and eight weeks ago. Their names are Zhong Zhong and Hua Hua after the Chinese word Zhonghua, which means "Chinese people."

"They are lively. They are walking, jumping, playing around like all newborn baby monkeys," Poo says, adding that so far they seem very healthy.

Many bioethicists and scientists say it would be highly unethical to even try to clone a person the same way.

The first concern is safety. For example, most of the cloned Chinese monkeys died in the womb or soon after birth. "So safety of the resulting child is a major concern," Hyun says.

But even if it were safe, many researchers say there are many other reasons to never try. "Cloning one individual in the image of another really sort of demeans the significance of us as individuals," says Dr. George Daley, dean of the Harvard Medical School. "There's a certain sort of gut sense that it violates sort of natural norms."

"To say it's OK for some scientist or some parent to go ahead for no good reason to produce a cloned child would really demean what it means to be human," says Marcy Darnovsky, executive director of the Center for Genetics and Society, a watchdog group

Daley and others fear a rogue scientist somewhere could attempt human cloning, even though there are laws against it in many countries.

"We live in such a celebrity-driven world that there are unscrupulous practitioners who might try this," Daley says.