Accessibility links
Medicaid Transport Program Faces Budget Cuts In Some States : Shots - Health News For more than 50 years, the health program for the poor and sick has been required to ferry some clients to and from medical appointments. But a few states say transport is currently too expensive.

No Car, No Care? Medicaid Transport Program Faces Cuts In Some States

No Car, No Care? Medicaid Transport Program Faces Cuts In Some States 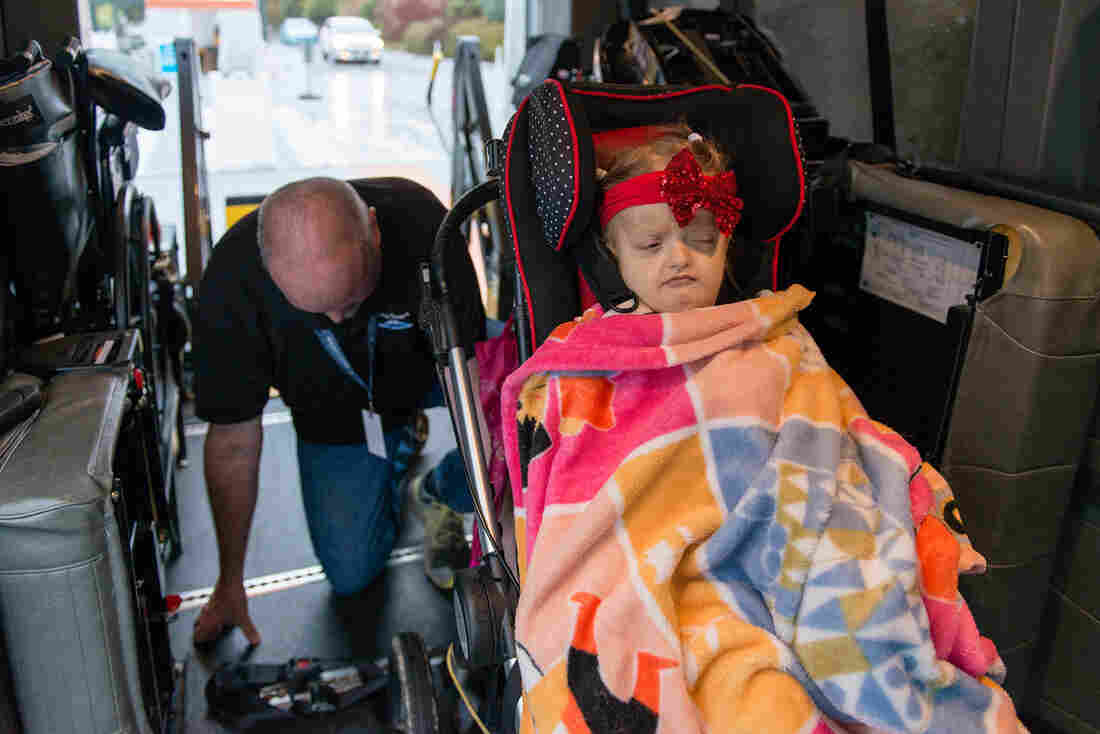 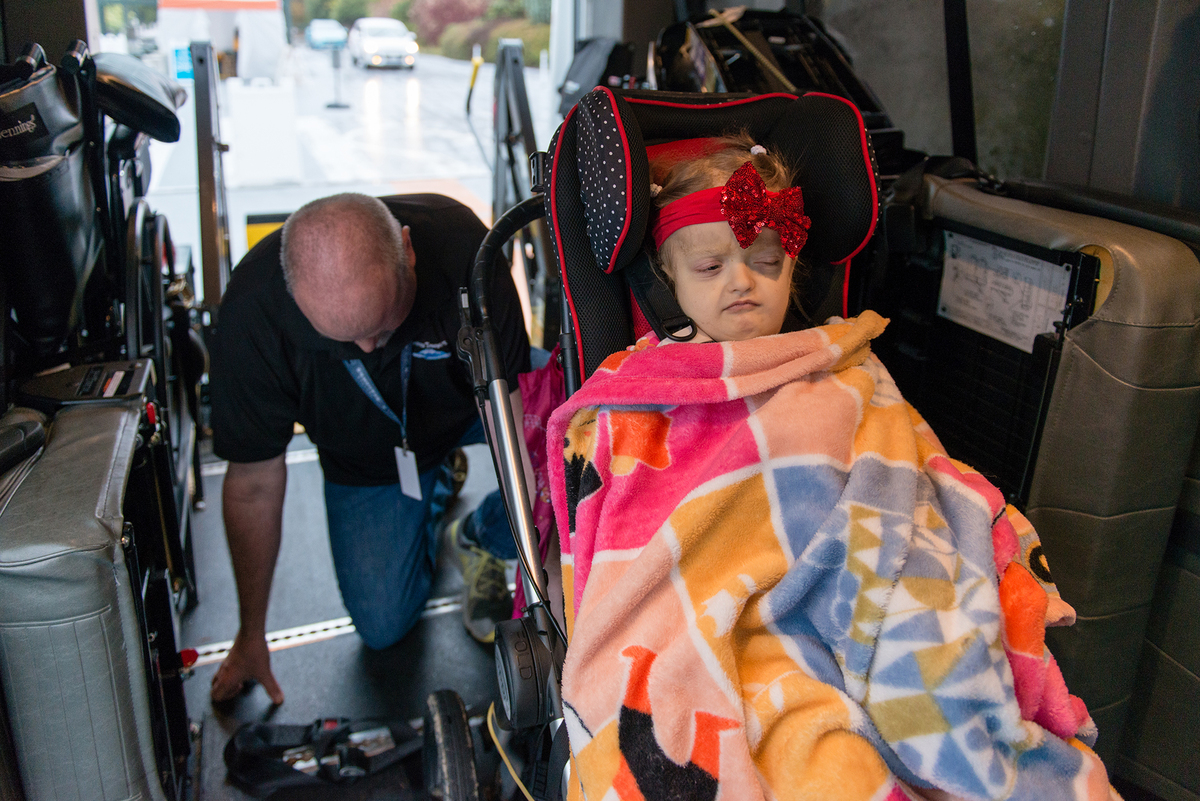 Unable to walk or talk, barely able to see or hear, 5-year-old Maddie Holt of Everett, Wash., waits in her wheelchair for a ride to the hospital.

The 27-pound girl is dressed in polka-dot pants and a flowered shirt for the trip, plus a red headband with a sparkly bow, two wispy blond ponytails poking out on top of her head.

Her parents can't drive her. They both have disabling vision problems; and, besides, they can't afford a car. When Maddie was born in 2012 with the rare and usually fatal genetic condition called Zellweger syndrome, Meagan and Brandon Holt, then in their early 20s, were plunged into a world of overwhelming need — and profound poverty.

"We lost everything when Maddie got sick," says Meagan Holt, now 27.

Multiple times each month, Maddie sees a team of specialists at Seattle Children's Hospital who treat her for the condition that has left her nearly blind and deaf, with frequent seizures and life-threatening liver problems.

The only way Maddie can make the trip, which is more than an hour each way, is through a service provided by Medicaid, the nation's health insurance program started more than 50 years ago as a safety net for the poor.

Designed for Medicaid's most fragile

Called non-emergency medical transportation, or NEMT, the benefit is as old as Medicaid itself. It requires the transport of certain people to and from medical services like mental health counseling sessions, substance abuse treatment, dialysis, physical therapy, adult day care and, in Maddie's case, visits to specialists.

"This is so important," says Holt. "Now that she's older and more disabled, it's crucial."

However, citing runaway costs and a focus on patients taking responsibility for their health, Republicans have vowed to roll back the benefits, cut federal funding and give states more power to eliminate services they consider unaffordable.

More than 1 in 5 Americans — about 74 million people — now rely on Medicaid to pay for their health care. That includes nearly 104 million NEMT trips each year at a cost of nearly $3 billion, according to a 2013 estimate, the most recent.

They also contend that changes will help curb what government investigators in 2016 warned is "a high risk for fraud and abuse" in the program. In recent years, the Centers for Medicare & Medicaid Services (CMS) reported that a Massachusetts NEMT provider was jailed and fined more than $475,000 for billing for rides attributed to dead people. Two ambulance programs in Connecticut paid almost $600,000 to settle claims that they provided transportation for dialysis patients who didn't have medical needs for ambulance transportation.

Last March, Rep. Susan Brooks, an Indiana Republican, introduced a resolution that would have revoked the federal requirement to provide NEMT in an effort to provide states with "flexibility." That effort stalled.

Another Republican proposal in 2017 would have reduced federal funding for the NEMT program. It failed, but other efforts by individual states still stand.

But there is some flexibility for states already. Former Health and Human Services Secretary Tom Price and CMS Administrator Seema Verma encouraged the nation's governors to consider NEMT waivers, among other actions, in a March 2017 letter.

"We wish to empower all states to advance the next wave of innovative solutions to Medicaid challenges," they wrote. The Trump administration has used state waivers to bypass or unravel a number of the Obama administration's more expansive health policies, and has granted some states' requests.

At least three states — Iowa, Indiana and Kentucky — have received federal waivers and extensions allowing them to cut Medicaid transportation services. Massachusetts has a waiver pending.

Critics of the cuts worry the trend will accelerate, leaving poor and sick patients with no way to get to medical appointments.

"I wouldn't be surprised to see more of these waivers in the pipeline," says Joan Alker, executive director of the Georgetown University Center for Children and Families.

Because medical transportation isn't typically covered by the commercial insurance plans most Americans use, it's unfamiliar to many people and could be seen as unnecessary, says Eliot Fishman, senior director of health policy for Families USA, a nonprofit, nonpartisan consumer health advocacy group.

Formerly a Medicaid official in the federal government, Fishman calls the transportation program "vital" not only for children with severe disabilities, but also for non-elderly, low-income adults. 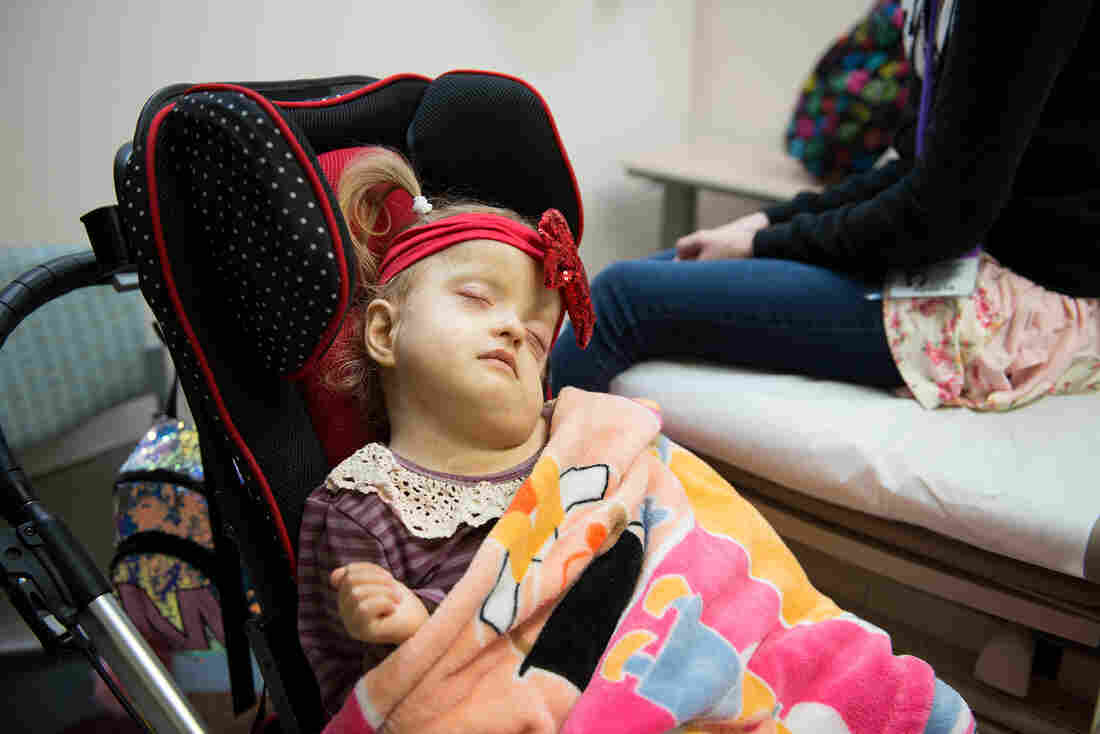 Maddie Holt, 5, was born with a rare genetic condition called Zellweger syndrome and is unable to walk or talk and can barely see or hear. Heidi de Marco/KHN hide caption 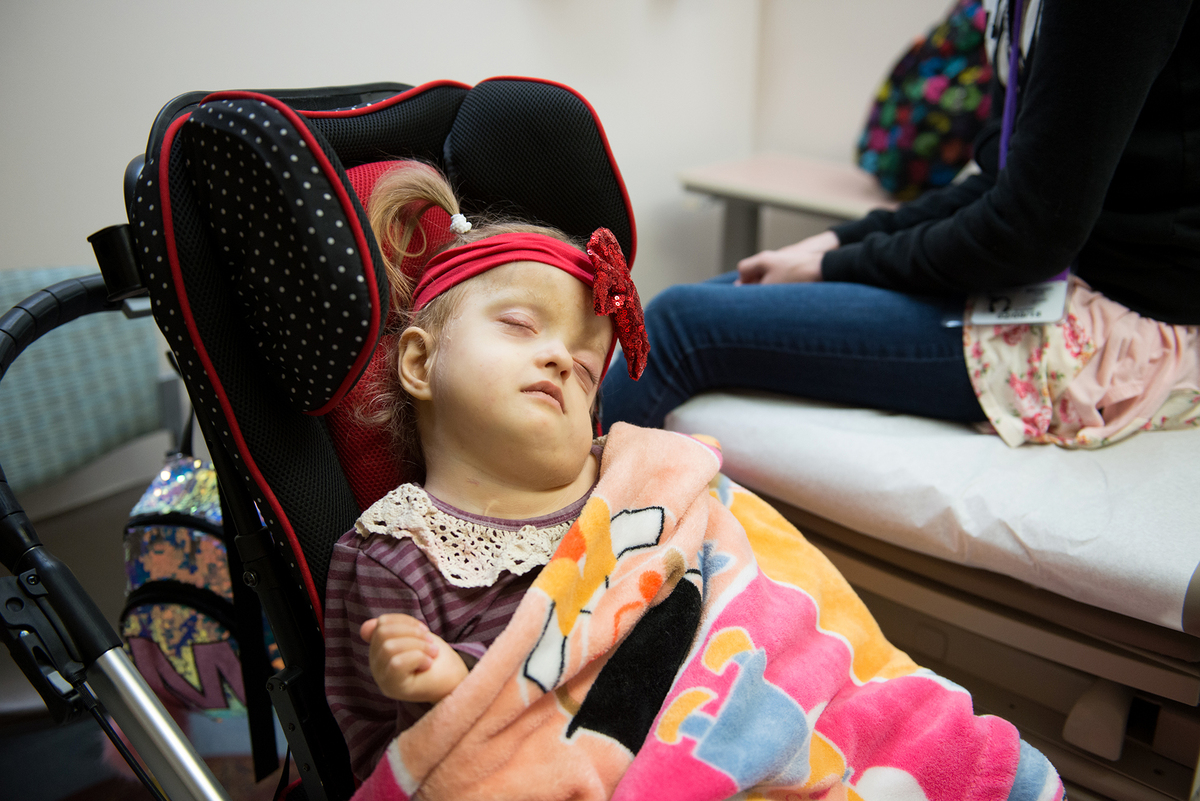 Maddie Holt, 5, was born with a rare genetic condition called Zellweger syndrome and is unable to walk or talk and can barely see or hear.

In a 2014 survey of Medicaid users, CMS found that lack of transportation was the third-greatest barrier to care for adults with disabilities, with 12.2 percent of those patients reporting they couldn't get a ride to a doctor's office.

"This is not something to be trifled with lightly," Fishman says. "We're talking about a lifesaving aspect of the Medicaid program."

About 3.6 million Americans miss or delay non-emergency medical care each year because of transportation problems, according to a 2005 study published by the National Academy of Sciences.

That same study analyzed costs for providing NEMT to patients facing 12 common medical conditions and found that providing additional transportation is often cost-effective because patients who got to a health appointment stayed healthier.

Medicaid is required to provide NEMT services using the most appropriate and least costly form of transportation, whether that's taxis, vans or public transit.

Proponents of revamping NEMT note that disabled children like Maddie and other people with serious disabilities are in little danger of losing services. In Iowa and Indiana, Medicaid transportation remains available to several groups of patients, including those classified as "medically frail," though the definition of who qualifies can vary widely.

In addition, one managed-care provider, Anthem, continues to transport Indiana Medicaid patients, despite the waiver that was first enacted in 2007.

Left out and struggling

Still, some Medicaid clients struggle without transport services. Fallon Kunz, 29, of Mishawaka, Ind., has cerebral palsy, migraine headaches and chronic pain. She uses a power wheelchair. When she was a child, she qualified for door-to-door service to medical appointments, she says.

Kunz is studying psychology online at Southern New Hampshire University. She lives with her father, whose home is outside the route of a Medicaid transit van. Getting to and from medical appointments for her chronic condition is a constant struggle, she says. Taxis are too expensive: $35 each way for a wheelchair-enabled cab.

"The only way I can get rides to and from my doctor's appointment is to ride the two miles in my wheelchair, despite all kinds of weather, from my home, across the bridge, to the grocery store," she says. "Right outside the grocery store is the bus stop. I can catch the regular bus there."

Sometimes, she's in too much pain or the Indiana weather — warm and humid in the summer, frigid and windy in the winter — is too much to battle and she skips the appointment.

"Today I didn't go because it was too cold and my legs hurt too much," she says on a Tuesday in December. "I didn't feel like getting blown off the sidewalk."

In Maddie Holt's case, she is one of hundreds of NEMT-eligible children transported to Seattle Children's each month. Last September, for instance, more than 1,300 clients made more than 3,600 trips at a cost of more than $203,000, according to the Washington Health Care Authority, which oversees the state's Medicaid program called Apple Health. 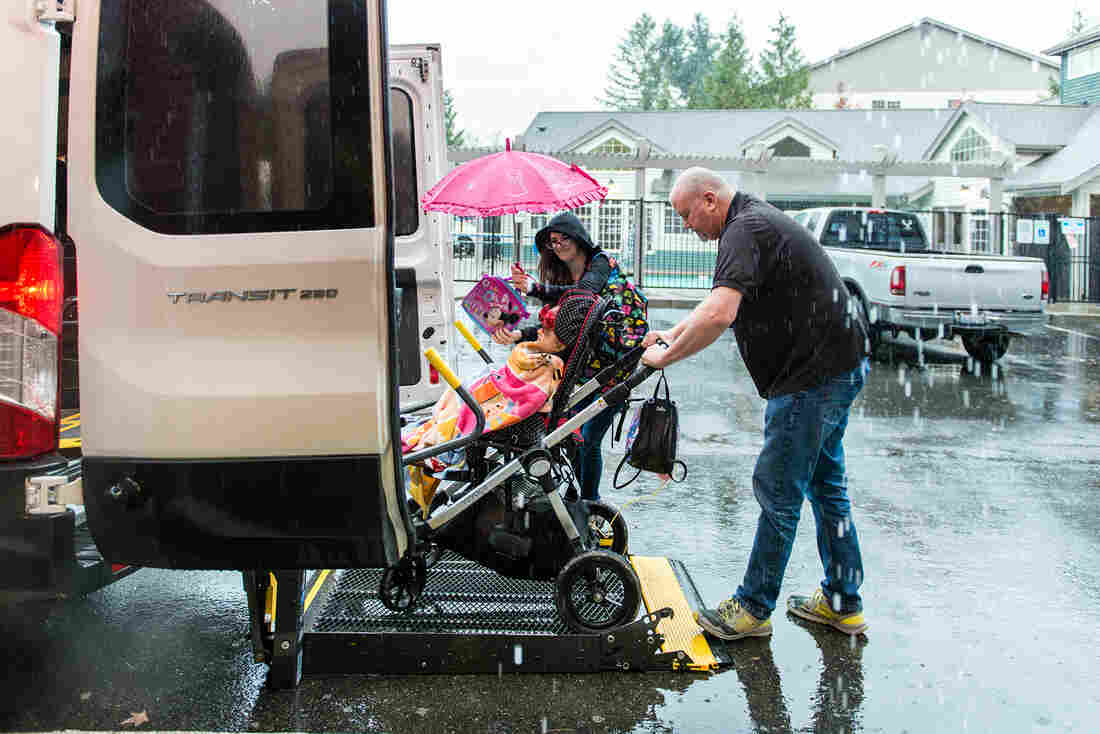 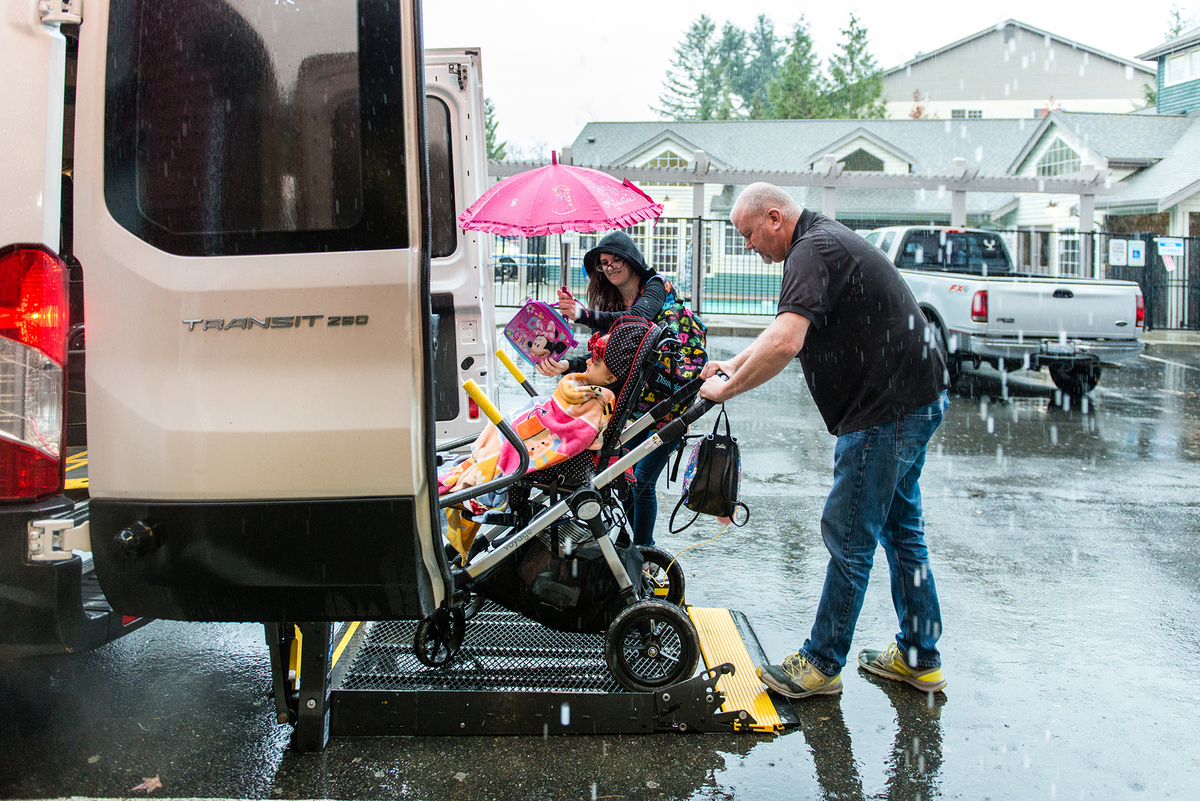 Dunn carefully loads Holt into the van as her mom, Meagan Holt, looks on.

The need is so great, in fact, that the hospital created a transportation will-call desk to help organize the comings and goings.

"When we realized how much transportation is a barrier to getting to your appointment, we decided to do something about it," says Julie Povick, manager of international exchanges and guest services at Seattle Children's.

"The majority of our patients are in survival mode," Povick adds. "You need a lot of handholding."

But Verma, the architect of Indiana's Medicaid overhaul plan, has suggested that too much handholding might be "counterproductive" for patients and bad for the country.

"[Ninety] percent of [Healthy Indiana Plan] members report having their own transportation or the ability to rely on family and friends for transportation to health care appointments," Verma notes in a 2016 Health Affairs essay.

But there are some who can't.

"I'm a college student, I have a cat," says Kunz. "I'm just a regular human trying to do things, and the inaccessibility in this area is ridiculous."