Accessibility links
A Pregnant Woman's Marijuana Use Could Harm The Baby, Doctors Say : Shots - Health News Adults in a growing number of states can now legally use marijuana without a doctor's prescription. But obstetricians worry pregnant women don't realize the drug could hurt their kids. 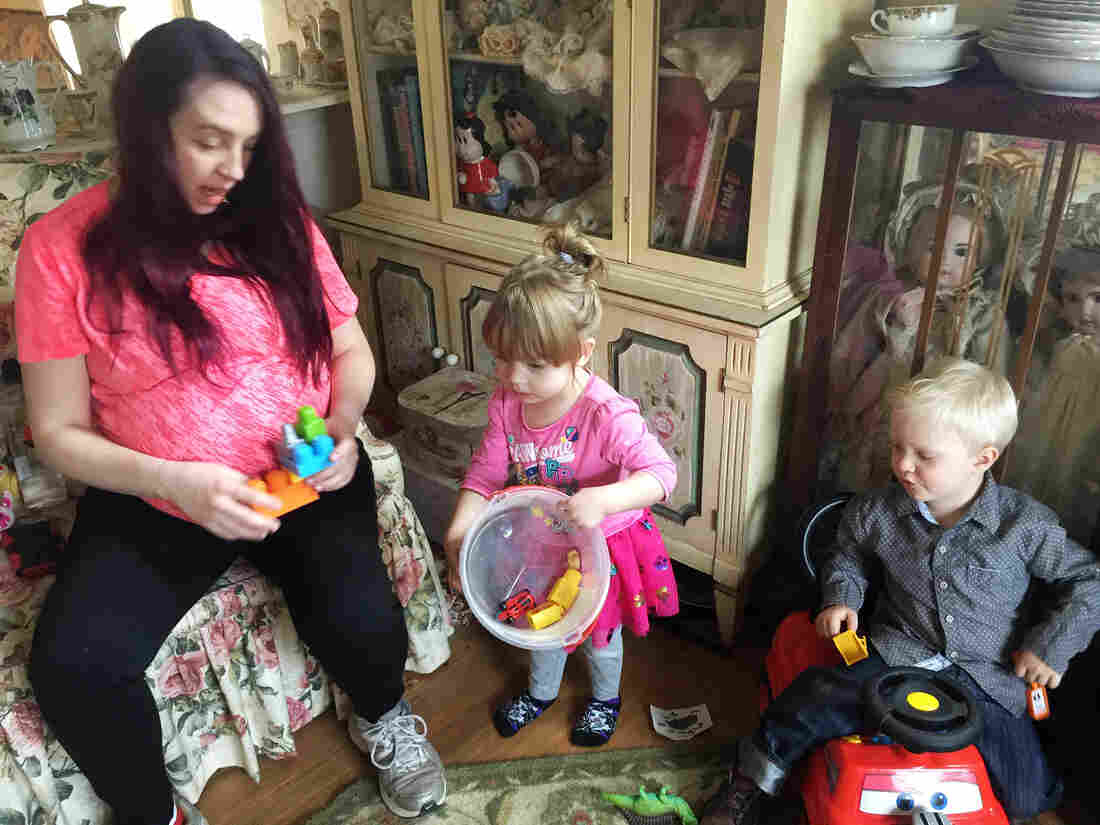 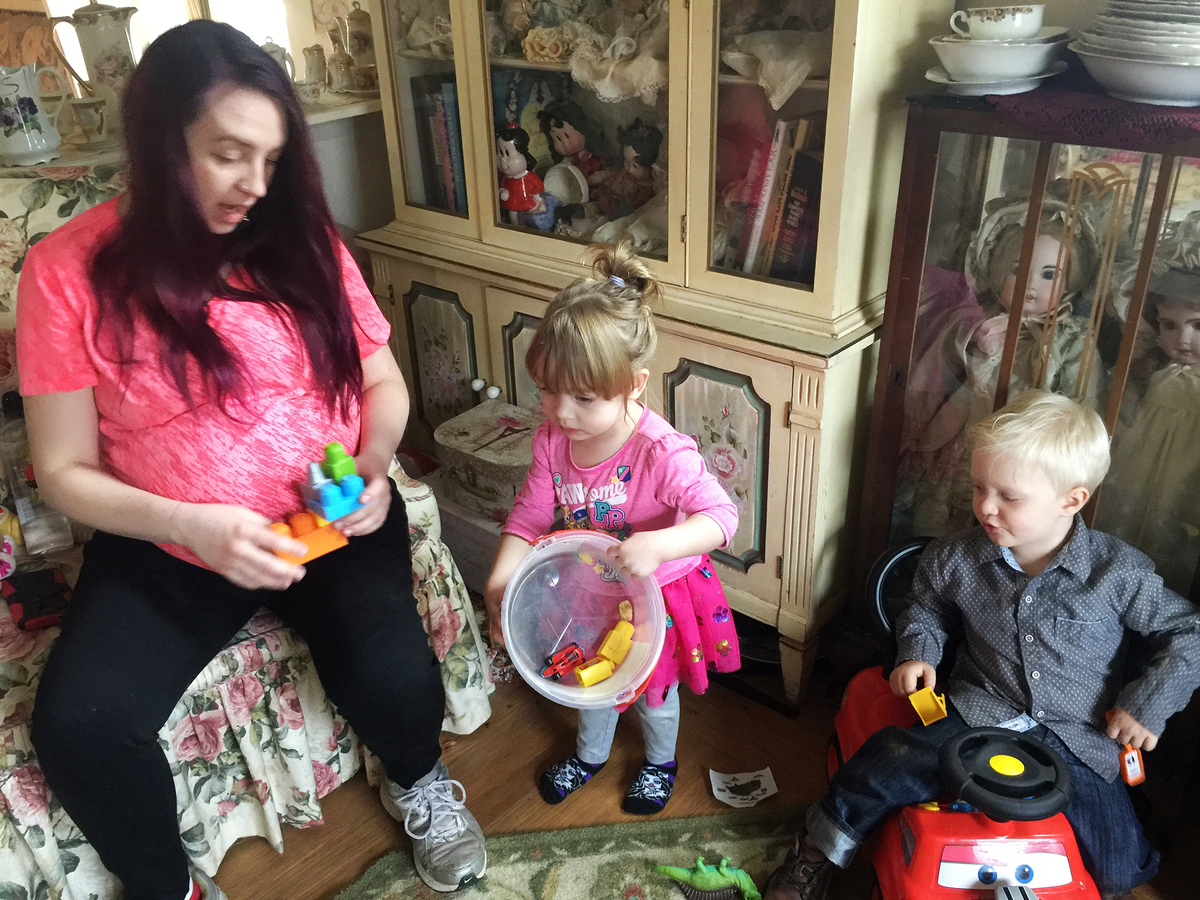 Two-year old Maverick Hawkins sits on a red plastic car in his grandmother's living room in the picturesque town of Nevada City, Calif., in the foothills of the Sierra Nevada mountains. His playpal Delilah Smith, a fellow 2-year-old, snacks on hummus and cashews and delights over the sounds of her Princess Peppa stuffie.

It's playtime for the kids of the provocatively named Facebook group "Pot Smoking Moms Who Cuss Sometimes."

Maverick's mother, Jenna Sauter, started the group after he was born. "I was a new mom, a young mom — I was 22 — and I was just feeling really lonely in the house, taking care of him," she says. She wanted to reach out to other mothers but didn't want to hide her marijuana use.

"I wanted friends who I could be open with," Sauter says — "like I enjoy going to the river and I like to maybe smoke a joint at the river."

There are nearly 2,600 members now in the Facebook group. Marijuana, which became legal for recreational use in California earlier this month, is seen by many group members as an all-natural and seemingly harmless remedy for everything from morning sickness to post-partum depression.

Delilah Smith's mom Andria is 21 and a week away from her due date with her second child. She took umbrage when an emergency room physician recently suggested she take "half a Norco"— a pill akin to Vicodin, an opioid-based painkiller — for her excruciating back pain.

Smith is disdainful. "She was like, 'We know more about Norco and blah, blah, blah and what it can do to you, but we don't that much about marijuana,' " Smith says.

"I was like, 'Test me!' I was like, 'Observe me. My kid could count to 10 before she was even 2 by herself, and I smoked pot throughout my whole pregnancy. She's not stupid! There is no third eye growing.' "

The number of women in the United States who use marijuana during pregnancy has been difficult to gauge, partly because some women are reluctant to tell their doctors; at least 24 states consider substance use during pregnancy a form of child abuse, so divulging such information can have serious consequences.

Still, a number of studies nationally suggest there's been a sharp jump in pot use among pregnant women, especially among younger mothers.

Smith and Sauter both told their doctors of their marijuana use, and after they gave birth, their babies were tested for signs of marijuana's chief active ingredient, THC.

Researchers say psychoactive compounds in marijuana easily cross the placenta, exposing the fetus to perhaps 10 percent of the THC — tetrahydrocannabinol — that the mother receives, and higher concentrations if the mom uses pot repeatedly. 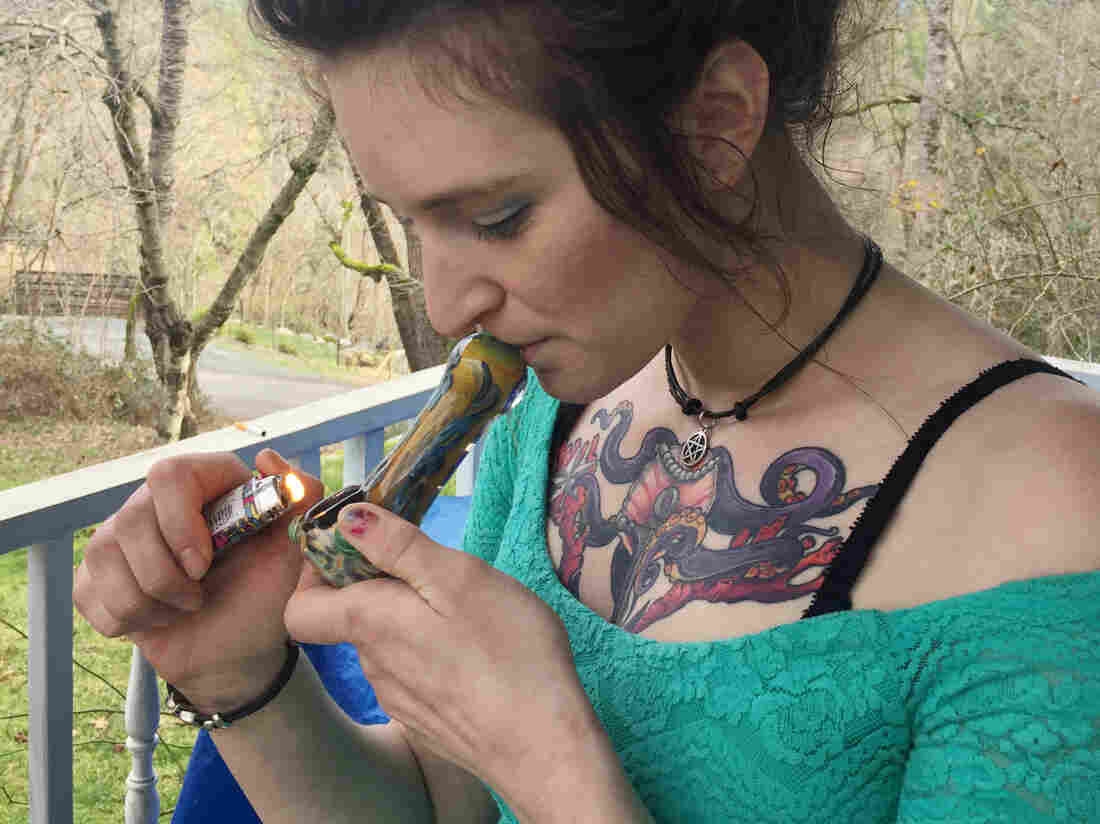 When Jenna Sauter's youngest son, Axel, tested positive for THC — marijuana's active ingredient — after he was born, she got a home visit from local social services. Sauter says she and her friends don't smoke near their children. Sarah Varney/Kaiser Health News hide caption 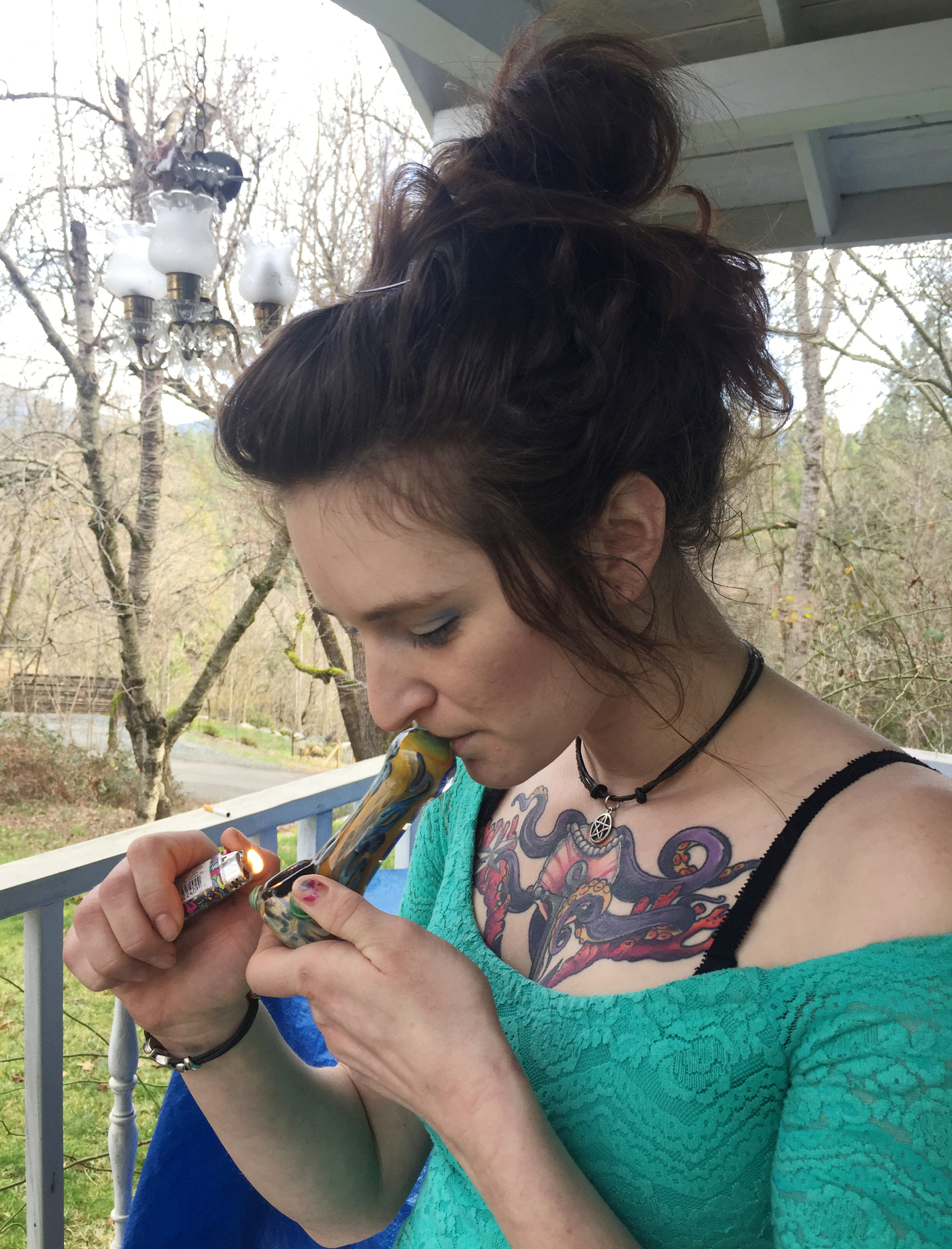 When Jenna Sauter's youngest son, Axel, tested positive for THC — marijuana's active ingredient — after he was born, she got a home visit from local social services. Sauter says she and her friends don't smoke near their children.

Dr. Dana Gossett, a research obstetrician and gynecologist at the University of California, San Francisco who also treats patients, says studies show marijuana increases the risk of stillbirth and adversely affects how a baby's brain develops.

Gossett cites some research that suggests children exposed to marijuana while growing in the womb can have poorer performance on visual-motor coordination — tasks like catching a ball or solving visual problems like puzzles.

And studies also show, she says, these kids may have behavioral problems at higher rates than other children by the age of 14, and are at greater risk for initiating marijuana use.

"That is biologically plausible," Gossett says, "because the effects of THC in the brain may actually prime that child for addictive behavior, not just to marijuana but to alcohol as well."

There has been little research on the effects of THC passed to a baby via breastfeeding. But because there isn't enough evidence to determine the risk, the American College of Obstetricians and Gynecologists discourages marijuana use during pregnancy, and warns breastfeeding moms to avoid eating or smoking marijuana or inhaling its second-hand smoke — since some amount of THC, just like alcohol, can pass into the baby that way.

To Andria Smith's point that her daughter, Delilah, is just as smart as her peers, studies do show that, in general, children exposed to marijuana in utero don't score worse on reading or mathematics as they get older.

After their babies tested positive for THC, Sauter and Smith were visited at home by county social service workers, who gave the women information about the effects of marijuana use during pregnancy and breastfeeding.

Sauter says she and her friends don't smoke near their children, nor do they spend their days stoned to oblivion.

"It's not like being totally out of it," Sauter says. "I'm completely aware of my surroundings. I'm watching my kid, watching my friends' kids. I'm hanging out. You totally know what's going on."

Sauter says many parents she knows are uncertain if they can get in trouble using pot now in California. Indeed, child protection laws in most states remain at odds with liberal marijuana laws. Some moms on the Facebook page will not go to the doctor — even when they're sick.

"They don't want to get tested," Sauter says. "And that's dangerous. We should be able to be open about it. Because if something does go wrong, we've got to know."

ACOG does not endorse mandatory testing for THC in pregnant women or newborn babies — out of concern that women could be jailed or have their babies taken from them. Instead, the organization urges obstetricians to ask pregnant women about drug use during prenatal visits, counseling these patients against substance use and helping them alleviate their nausea, back pain or post-partum depression with medications deemed safe by federal drug regulators.

But with recreational cannabis now legal in at least eight states and the District of Columbia, physicians like Gossett are worried that newborns and young children, whose brains are rapidly developing, constructing billions of neural connections, will come to know the world in an altered state.

"They're learning what things look like and how things move and how to respond to the world," Gossett says. Marijuana's psychotropic effects, she adds, will change "a child's ability to interpret the world around him."