Accessibility links
Stone Tools Discovered In India Could Rewrite Toolmaking History : Shots - Health News Scientists have found stone tools in India dating back to 385,000 years ago. The sharp tools were made with a Stone Age technique thought to have originated in Africa and Europe. 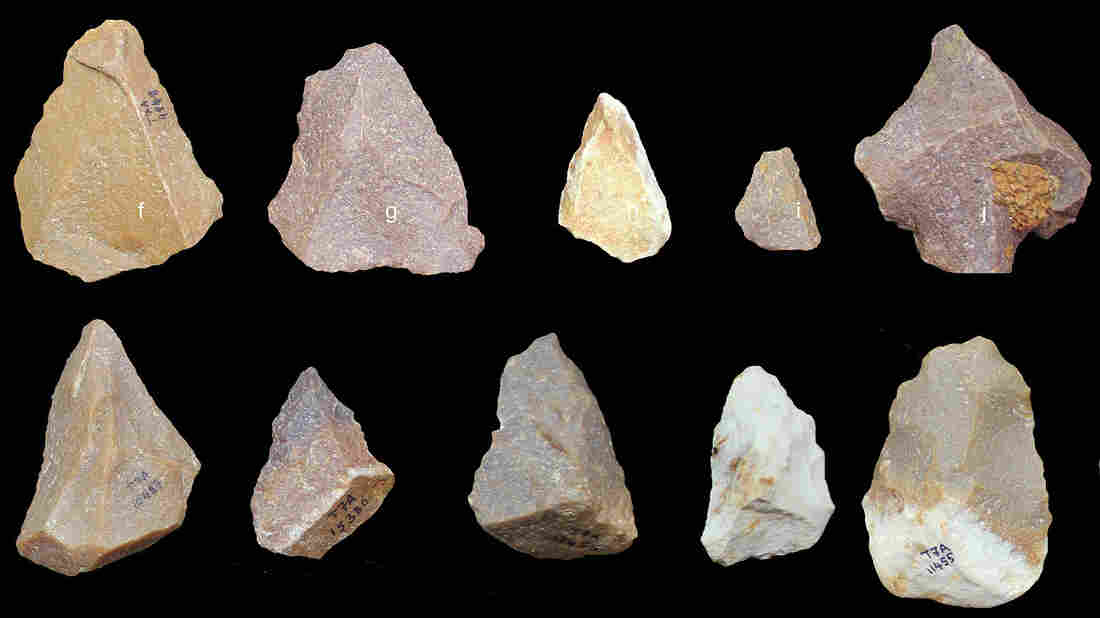 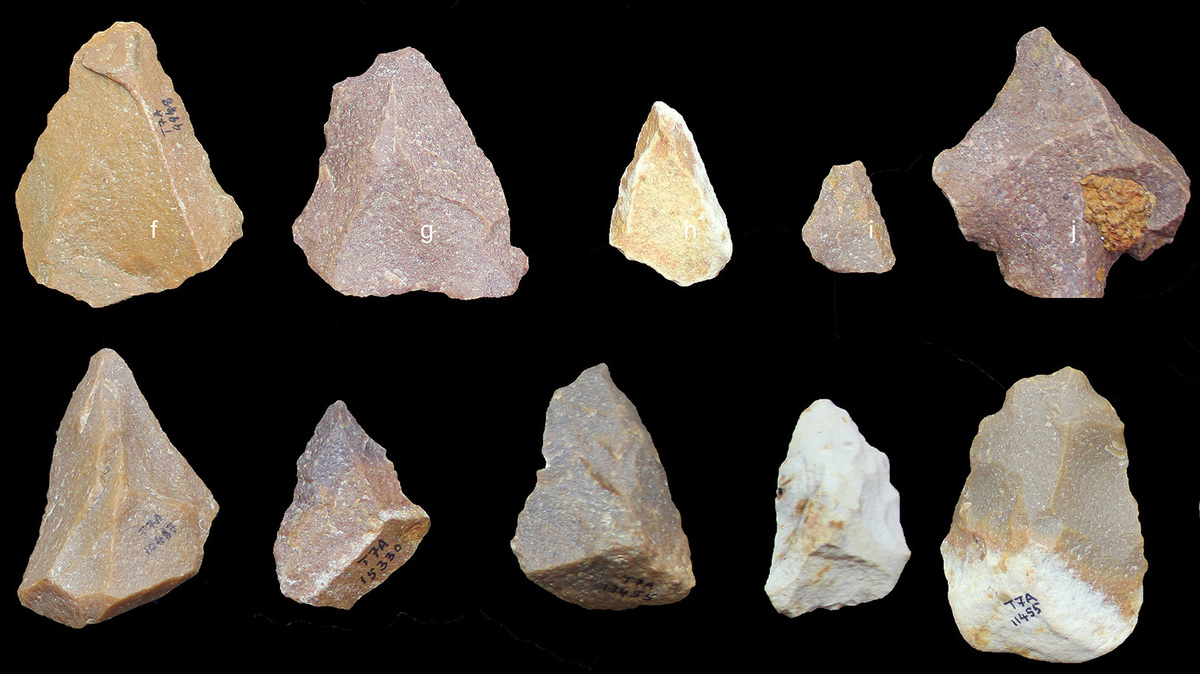 Middle Palaeolithic artifacts recently excavated from Attirampakkam, an archaeological site in present-day southern India. The artifacts suggest the technique used to make them spread across the world long before researchers previously thought.

Somewhere around 300,000 years ago, our human ancestors in parts of Africa began to make small, sharp tools, using stone flakes that they created using a technique called Levallois.

The technology, named after a suburb of Paris where tools made this way were first discovered, was a profound upgrade from the bigger, less-refined tools of the previous era, and marks the Middle Stone Age in Africa and the Middle Paleolithic era in Europe and western Asia.

Neanderthals in Europe also used these tools around the same time. And scientists have thought that the technology spread to other parts of the globe much later — after modern humans moved out of Africa.

But scientists in India recently discovered thousands of stone tools made with Levallois technique, dating back to 385,000 years ago. These latest findings, published Wednesday in the journal Nature, suggest the Levallois technique spread across the world long before researchers previously thought.

The Indian team uncovered these tools at one of India's best known archaeological sites — Attirampakkam, which is located near the present-day city of Chennai in southern India.

"It has a very, very long history of occupation of different prehistoric cultures in this one site," says Shanti Pappu, an archaeologist at the Sharma Centre for Heritage Education in Chennai and one of the lead authors of the new study.

The oldest artifacts from the site — big hand axes and cleavers — date back all the way to 1.5 million years ago, and are associated with the older Acheulian culture of the Early Stone Age.

The more recent tools, which date between 385,000 to 172,000 years ago, are small and clearly made with Levallois technique; it relies on first creating a starter stone in the shape of a turtle shell, then hitting that preformed stone to create a flake with sharp edges.

Accidental Tools: A Difference In Our Ancestors And Monkeys

The flakes were used as knives and scrapers, scientists say; the technique gave the toolmakers more control over the size and shape of the tool.

"It's a very specific technology, very clearly identifiable and very similar to what you see in Africa," says Pappu.

The more than 7,000 artifacts discovered at the site run counter to what's been the prevailing theory about when the technology first reached the region.

"It was believed that this particular cultural or behavioral package perhaps came to India about 125,000 years ago, by modern humans dispersing out of Africa," says Pappu. Another hypothesis suggested that the technology came even later to India, around 70,000 years ago.

"The findings of this paper clearly knock those ideas out of the water," says paleoanthropologist Rick Potts, the head of the Human Origins Program at the Smithsonian Museum of Natural History, who wasn't involved in the study. "It has to be earlier."

"This is a marvelous discovery," says Michael Petraglia, at the Max Planck Institute for The Science of Human History, who also had no role in the recent research. "It fills a very important gap in our knowledge of cultural history of humans in South Asia between 400,000 to 175,000 years ago."

The team in India found no human or hominin fossils at the site, which makes it hard to know what ancestral human species lived here and made these tools.

"It's a whodunit, and we don't have the answer," Potts says.

The authors think it could have been modern humans, Homo sapiens, who moved out of Africa much earlier than currently believed, and brought this technology with them.

Or, they say, a more ancestral hominin might have developed the technology independently in India.

Petraglia thinks it's the latter, since there's no fossil evidence anywhere in India suggesting that modern humans arrived there earlier. However, fossil evidence does hint, he says, that a more ancestral human species — Homo heidelbergensis — lived on the subcontinent and used some of the older Acheulian technologies.

And, given that the Acheulian and Levallois technologies partially overlap at this site, "I see that as continuity in the archaeological record of India, rather than as an external influence," says Petraglia.

"It looks like the Neanderthals of Europe and the near East, as well as the ancestors of Homo sapiens in Africa developed this ... Levallois technique independently of one another," says Potts. It might have developed independently in South Asia as well. "We're familiar in history of independent inventions of things like the calendar in different parts of the world."

Potts says what excites him most about the new finding is that it places India prominently on the map of human innovation and toolmaking.

"It raises a question that all archaeologists should be asking right now," he says. "What else was going on in India and how prominent was it in the story of human origins?"