Accessibility links
Maternal Mental Health Bills Aim To Make It Easier For Depressed Moms To Get Help : Shots - Health News A package of mental health bills in California aims to make it easier for new moms to get help and to build awareness among more health workers of postpartum mood disorders. 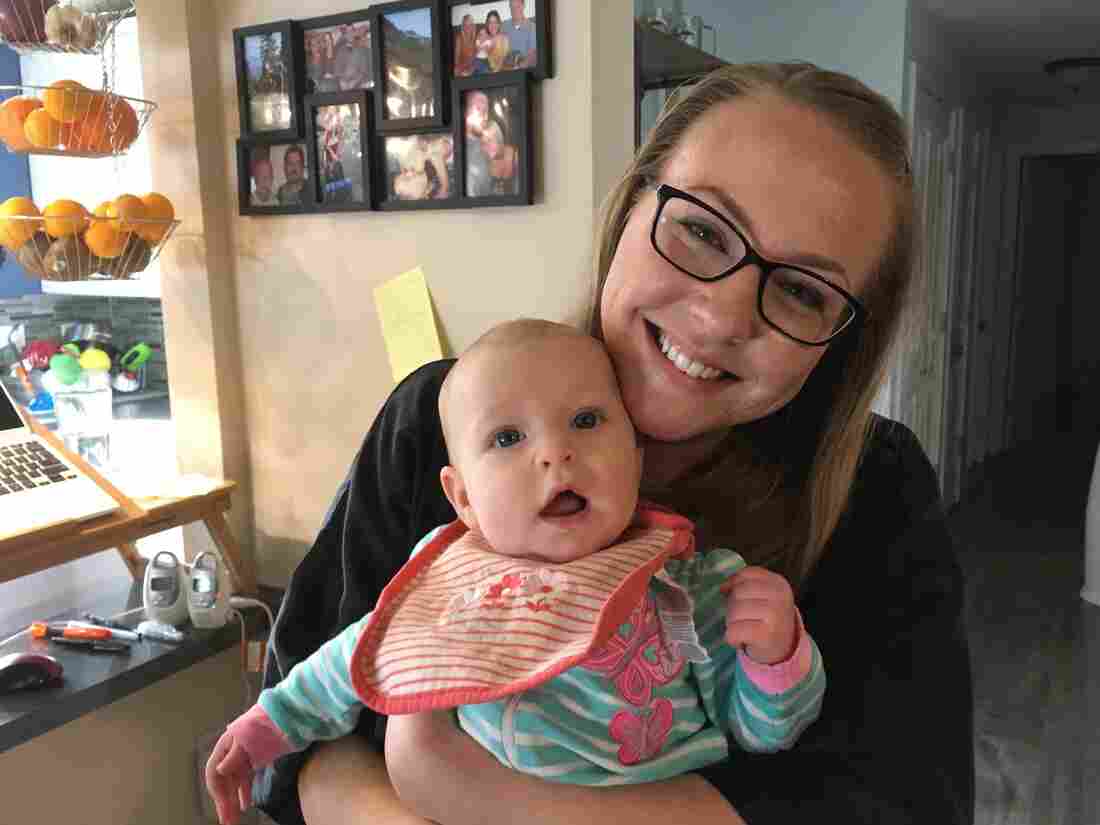 Jessica Porten went to a doctor's appointment with her daughter, Kira, to get help with postpartum depression. She soon found herself in the company of police who escorted her to a hospital's emergency department. April Dembosky/KQED hide caption 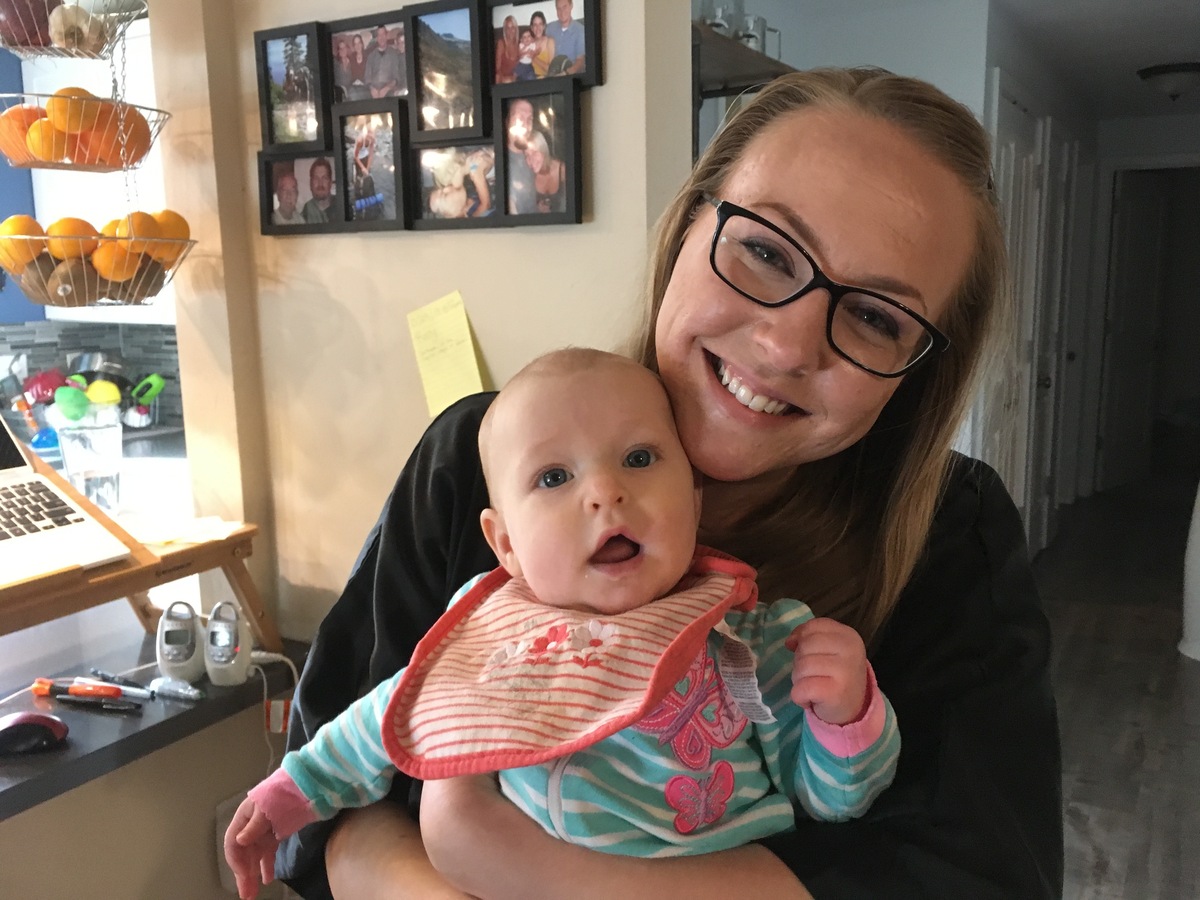 Jessica Porten went to a doctor's appointment with her daughter, Kira, to get help with postpartum depression. She soon found herself in the company of police who escorted her to a hospital's emergency department.

Four months after having her second baby, Jessica Porten started feeling really irritable. Little things would annoy her, like her glider chair.

"It had started to squeak," she says. "And so when I'm sitting there rocking the baby and it's squeaking, I would just get so angry at that stupid chair."

She read online that irritability could be a symptom of postpartum depression — a condition that affects up to 1 in 7 women during or after pregnancy, according to the American Psychological Association. In California, where Porten lives, those rates are even higher, spurring state lawmakers to introduce a package of bills to improve mental health screening and treatment for new moms.

Porten hopes they help women avoid what she went through.

She went to Capital OB/GYN, a women's clinic in Sacramento that accepts her Medicaid coverage as payment, to talk about medication options and therapy. Porten admitted to the nurse that she was having some violent thoughts.

But, Porten says, the nurse's manner toward her changed. "I could see in that moment that she stopped listening to me," Porten says.

The nurse called the police. The police escorted Porten and her baby to the emergency room. Hospital staff made her change into a gown and took her purse, but they let her keep her diaper bag for the baby. They put them both in a room, under constant watch, though the hospital staff was sympathetic, Porten says.

Finally, at midnight, 10 hours after she first got to the doctor's office, a social worker sent her home. Porten wrote on Facebook that the whole thing made her feel like a criminal.

"It was all legality," Porten says. "Everybody was protecting their own liability instead of thinking of me."

Administrators at Capital OB/GYN declined to comment. Gary Zavoral, a spokesman for Sutter Health, which runs the emergency room where Porten was taken, says that once a patient arrives in the ER for assessment, hospital staff must follow strict protocols.

"The process is to make sure everybody is safe: the individual's safe, the family's safe, the staff is safe," he says. "The process does take some hours, so 10 hours is not unusual."

When patients reference violent thoughts, it forces doctors to think about things in a different way, says Dr. Melanie Thomas, a psychiatrist at the University of California, San Francisco and Zuckerberg San Francisco General Hospital.

California law allows doctors to involuntarily confine a person with a mental disorder if they are a danger to themselves or others. But Thomas says what constitutes imminent danger can be vague.

"You can imagine a provider, a social worker, any number of people might interpret that phrase in different ways, about what is necessary to report and what isn't," she says.

The laws and medical protocols don't always line up, Thomas says. There have been times she felt asked to rely on legal reasoning over her clinical judgment.

"The fragmented aspects of our system of care make it difficult to get women the help that they really want," Thomas says.

That is one reason lawmakers in Sacramento are now introducing a package of bills to specifically address maternal mental health. Assemblyman Brian Maienschein, R-San Diego, is backing two of them. One would require doctors to screen new moms for depression; under current law, it's voluntary.

"The numbers here are so significant that I think it's something that doctors really should understand and should be prepared to both diagnose and treat," he says. Screening, he adds, also "educates a woman in that situation that this is an issue that may impact her."

Maienschein's other bill would direct the state to tap into a new federal pot of money set aside for postpartum programs and awareness campaigns. It was established under the 21 Century Cures Act, which was passed in the final months of the Obama administration.

"Getting federal money is a great thing," Maienschein says. "It's federal money that's available that I'd like to see California have, versus another state."

The legislation has given Jessica Porten a new purpose. People have told her that she should sue Capital OB/GYN for calling the police. But she says no.

"I walk into that waiting room and I see tons of Medi-Cal recipients — so they're all low-income," she says. "If I sue, it's only going to cause monetary damages to a facility that is clearly short on resources."

Instead, Porten says she'll advocate to get the new bills passed in California. She thinks that is the way to help the clinic's physicians and nurses do a better job of helping new moms get the care they need.