Accessibility links
Why Hospitals Have A Hard Time Swapping Old Patient Gowns For New Ones : Shots - Health News A Maryland hospital chain is testing new gowns that offer more coverage for patients' backsides. It's not the first time designers have tried to change the despised garment, without much success. 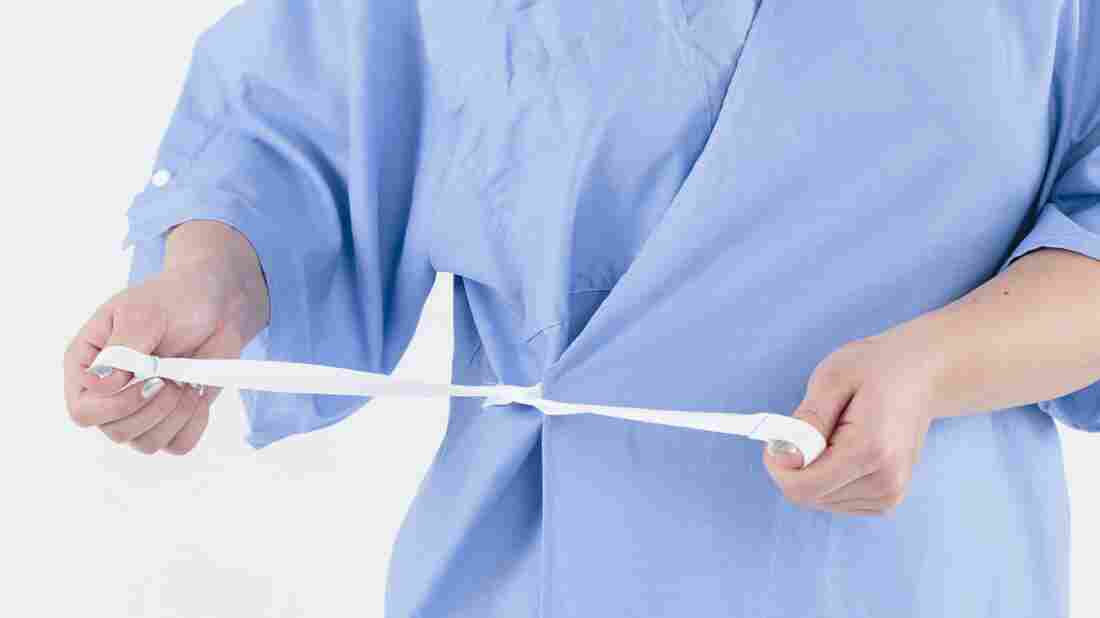 The new hospital garment ties in the front, like a robe, allowing the patient more modesty than the standard gown. Sophie Sahara Barkham/courtesy Care+Wear hide caption 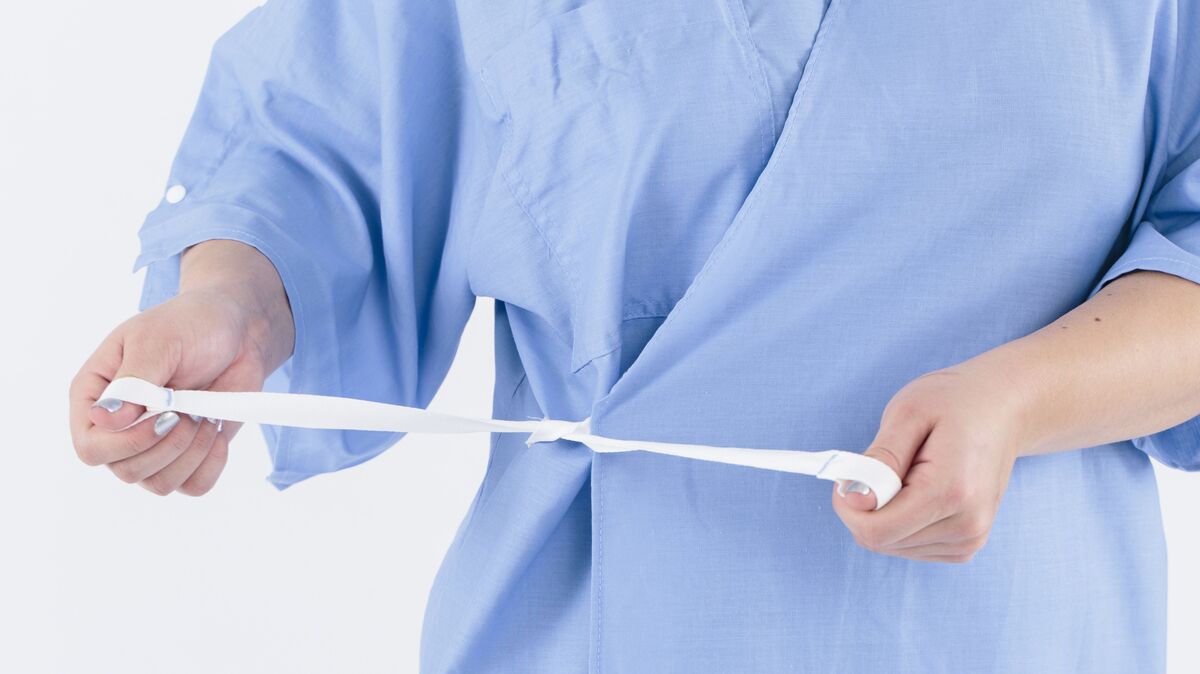 The new hospital garment ties in the front, like a robe, allowing the patient more modesty than the standard gown.

A medical company is trying to make hospital gowns less terrible — maybe even good. The company is called Care+Wear and it's currently testing out the new gowns at MedStar Montgomery in Olney, Md.

You know the old gown, sometimes called a "johnny": It's got the flimsy ties and the exposed back.

The new gown from Care+Wear ties at the front like a robe. It's got color coded ties and a pocket for your phone. Maybe most importantly, it covers the butt without sacrificing bedpan access for the bedridden.

A new hospital gown isn't a completely original thought. Back in 1999, a hospital in Hackensack, N.J., asked designer Nicole Miller to make gowns, robes, and pajama bottoms. In 2010 The Cleveland Clinic recruited Diane Von Furstenberg to help design a new gown modeled after her famous wrap around dresses. In 2014, the Henry Ford Health System in Detroit teamed up with Carhartt to make a robe they dubbed the Model G. While these designs may have been successful on the small scale, none of them have usurped the johnny gown as the industry standard, say industry experts.

Why not? "Hospitals are not designed for patients," says Dr. Bridget Duffy, the chief medical officer of Vocera, a hospital communications company. More importantly for this story, she was the chief experience officer at the Cleveland Clinic — the one with the Diane Von Furstenburg gown that they still use today — and she helped consult on the new Care+Wear gown. She says a big reason hospitals don't move toward a more patient-friendly gown is due to your usual bureaucratic inertia, as well as a habit of focusing more on health care provider needs than patients' needs.

"In the past we've never had patients in the room at the very beginning of the design process," she says. 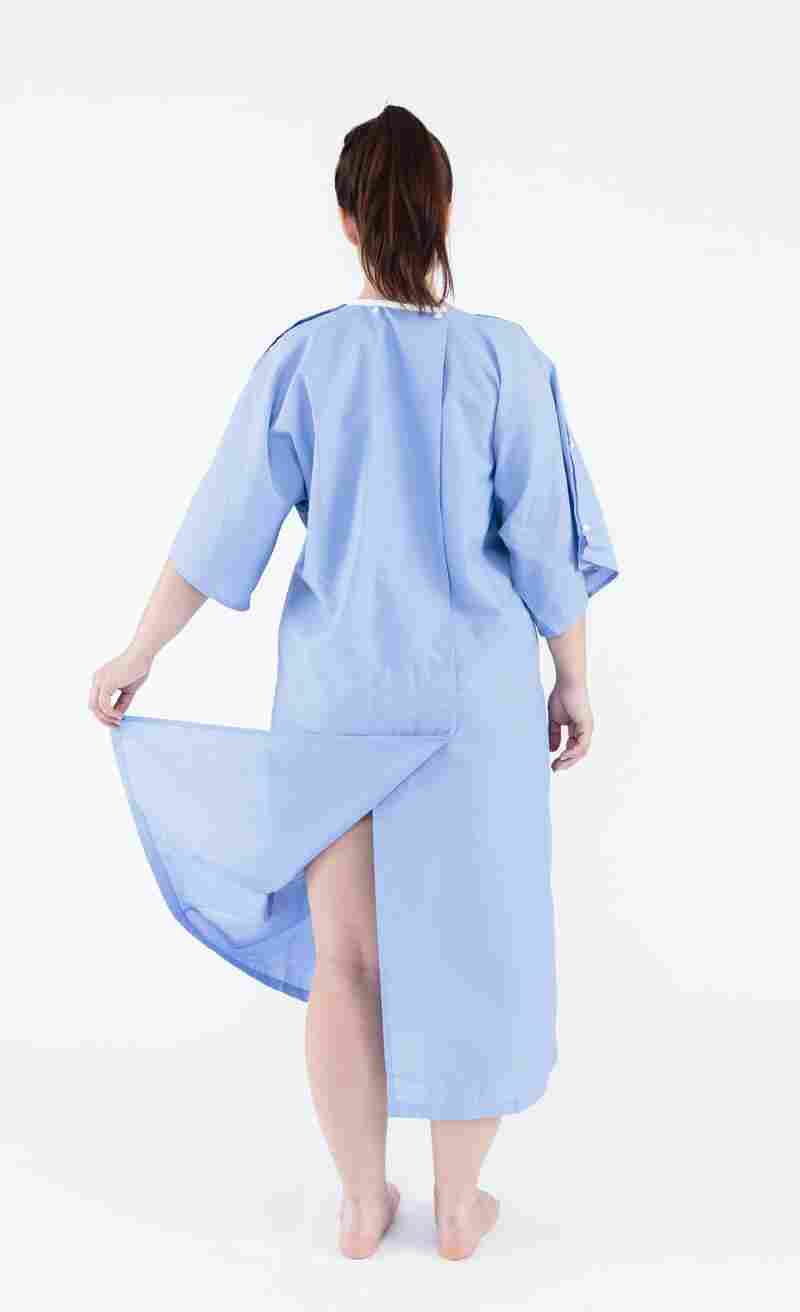 Instead of flimsy ties, the back of the new gown has a flap to cover the patient's behind. Sophie Sahara Barkham/courtesy Care+Wear hide caption

Dr. Fredrick Finelli, surgeon and vice president at MedStar Montgomery, sums up the gown design conflict: "For me as a doctor, it would be best to have the patient naked," he says. "Then I wouldn't have to deal with any gowns or cloth in my way. But for the patient, they basically want the opposite. They'd like to be covered up."

Care+Wear teamed up with a class at the Parsons School of Design to iron out the kinks of making a new robe that works for both patient and provider. Irene Lu was a student in the class who says they took each step of their design to both clinicians and patients.

"Working with these patients with different opinions on the gowns really helped inform our design," she says. They took notes on how people felt about the neckline, the buttons, the ties, and how it fit on people of different sizes and mobility.

Jimena Ryan was a patient at MedStar Montgomery who was wearing the new gown when I spoke to her. She was into it. The gown works more or less like a robe, so it felt familiar to her.

"I have many dresses for work that come together the same way, so it's intuitive to put it together," she says. "And the fact that it's not open in the back is a big relief, especially when you're up and around," she adds.

Part of Ryan's recovery was walking around the halls of the hospital. With the old gown, "you're always wondering what is open and what is flapping, what view am I giving," she says.

Professor Traci Lamar is less optimistic about any robe overtaking the johnny gown. She teaches at North Carolina State University in the college of textiles, and had a hand in a hospital gown re-design herself back in 2009.

"There are number of pressures in the hospital environment that influence what they purchase and when they purchase. Cost management, inventory management, storage space, all of those kinds of things come into play as factors when they start looking at changing a garment that's widely used," she says.

To her, the cost-benefit analysis isn't going to tip in favor of more hospitals changing gowns until the gowns have something more to offer than coverage.

"There's more value coming with the apparel item if it also becomes something that replaces or enhances other equipment that's used in the hospital environment," she says. Like a gown that can also keep an eye on your blood pressure, or measure your heart rate.

Who knows when textiles can be smart enough to pull that off, so we might be stuck with the old johnny gown for a while.