Accessibility links
Why Can't I Put My Smartphone Down? Here's The Science : Shots - Health News In an era when many kids get a first smartphone at age 10, psychologists say the devices have turned us into Pavlov's dogs — drooling for the next notification, buzz or text. Ready to dial back? 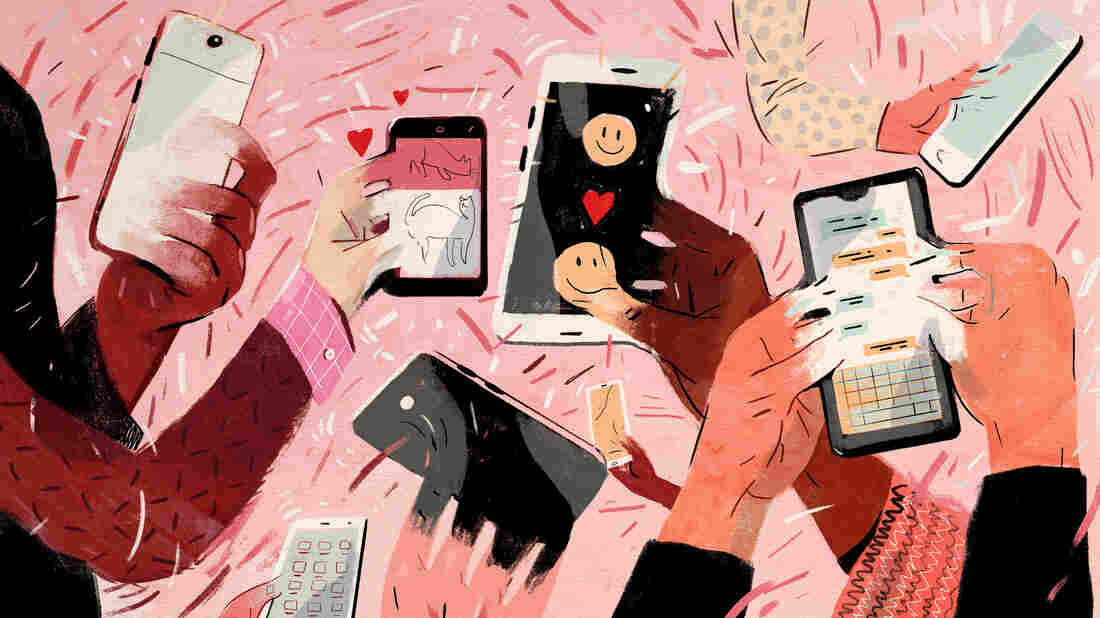 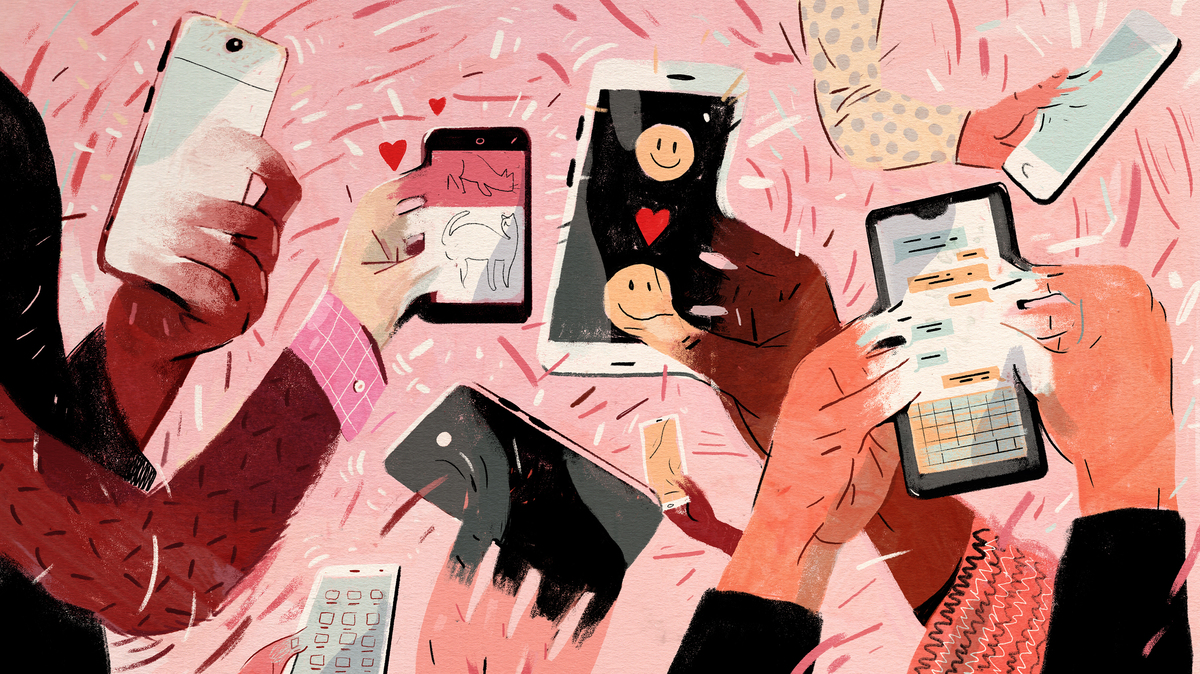 If the Russian psychologist Ivan Pavlov were alive today, what would he say about smartphones? He might not think of them as phones at all, but instead as remarkable tools for understanding how technology can manipulate our brains.

Pavlov's own findings — from experiments he did more than a century ago, involving food, buzzers and slobbering dogs — offer key insights into why our phones have become almost an extension of our bodies, modern researchers say. The findings also provide clues to how we can break our dependence.

Pavlov originally set off to study canine digestion. But one day, he noticed something peculiar while feeding his dogs. If he played a sound — like a metronome or buzzer — before mealtimes, eventually the sound started to have a special meaning for the animals. It meant food was coming! The dogs actually started drooling when they heard the sound, even if no food was around.

Hearing the buzzer had become pleasurable.

That's exactly what's happening with smartphones, says David Greenfield, a psychologist and assistant clinical professor of psychiatry at the University of Connecticut.

When we hear a ding or little ditty alerting us to a new text, email or Facebook post, cells in our brains likely release dopamine — one of the chemical transmitters in the brain's reward circuitry. That dopamine makes us feel pleasure, Greenfield says.

"That ping is telling us there is some type of reward there, waiting for us," Greenfield says.

Over time, that ping can become more powerful than the reward itself. Research on animals suggests dopamine levels in the brain can be twice as high when you anticipate the reward as when you actually receive it.

In other words, just hearing the notification can be more pleasurable than the text, email or tweet. "Smartphone notifications have turned us all into Pavlov's dogs," Greenfield says.

The average adult checks their phone 50 to 300 times each day, Greenfield says. And smartphones use psychological tricks that encourage our continued high usage — some of the same tricks slot machines use to hook gamblers.

"For example, every time you look at your phone, you don't know what you're going to find — how relevant or desirable a message is going to be," Greenfield says. "So you keep checking it over and over again because every once in a while, there's something good there." (This is called a variable ratio schedule of reinforcement. Animal studies suggest it makes dopamine skyrocket in the brain's reward circuity and is possibly one reason people keep playing slot machines.)

A growing number of doctors and psychologists are concerned about our relationship with the phone. There's a debate about what to call the problem. Some say "disorder" or "problematic behavior." Others think over-reliance on a smartphone can become a behavioral addiction, like gambling.

"It's a spectrum disorder," says Dr. Anna Lembke, a psychiatrist at Stanford University, who studies addiction. "There are mild, moderate and extreme forms." And for many people, there's no problem at all.

In this way, the phone is kind of like alcohol, Lembke says. Moderate alcohol consumption can be beneficial, for some people.

"You can make an argument that a temperate amount of smartphone or screen use might be good for people," Lembke says. "So I'm not saying, 'Everybody get rid of their smartphones because they're completely addictive,' But instead, let's be very thoughtful about how we're how we're using these devices, because we can use them in pathological ways."

Signs you might be experiencing problematic use, Lembke says, include these:

Consider a digital detox one day a week

Tiffany Shlain, a San Francisco Bay Area filmmaker, and her family power down all their devices every Friday evening, for a 24-hour period.

"It's something we look forward to each week," Shlain says. She and her husband, Ken Goldberg, a professor in the field of robotics at the University of California, Berkeley, are very tech savvy. But they find they need a break.

"During the week, [we're] like an emotional pinball machine responding to all the external forces," Shlain says. The buzzes, beeps, emails, alerts and notifications never end.

Shutting the smartphones off shuts out all those distractions.

"You're making your time sacred again — reclaiming it," Shlain says. "You stop all the noise."

When they started the digital break about nine years ago, which they call "Tech Shabbat," Saturdays suddenly felt very different. The family's not religious, she says, but they love the Jewish Sabbath ritual of setting aside a day for rest or restoration.

"The days felt much longer, and we generally feel much more relaxed," says Goldberg.

Their daughter, Odessa Shlain Goldberg, a ninth-grader, says the unplugging takes some of the pressure off.

More Tips To Curb Smartphone Use

Stop being Pavlov's dog — turn off notifications. "This won't necessarily keep you from checking the phone compulsively," says University of Connecticut psychologist David Greenfield. "But it reduces the likelihood because the notifications are letting you know there may be a reward waiting for you."

Use a wrist watch or alarm clock to check the time at night: "We strongly suggest not sleeping near your phone or looking at the phone one hour before you go to bed," Greenfield says. "There is good evidence that the phone can interfere with your sleep patterns."

Exclude the phone from mealtime. Don't even set it on the table. A study in 2015 found that people's heart rates and blood pressure spiked when they heard their phones ringing but couldn't answer them.

"There's no FOMO — fear of missing out — or seeing what my friends are doing," Odessa says. "It's a family day."

The teen says the perspective she gains from the digital power-down carries over into the rest of the week. For instance, she thinks differently about social media. She realizes the social media feeds often make other people's lives appear more exciting or glamorous.

"If you're sitting at home scrolling, you're not having that glamorous experience," she says. "So it feels a little discouraging."

Smartphones can compound teen angst, but there's a sweet spot

Odessa is definitely not alone in those observations. Social media can amplify the anxieties that come along with adolescence.

A recent study of high school students, published in the journal Emotion, found that too much time spent on digital devices is linked to lower self-esteem and a decrease in well-being. The survey asked teens how much time they spent — outside of schoolwork — on activities such as texting, gaming, searching the internet or using social media.

"We found teens who spend five or more hours a day online are twice as likely to say they're unhappy," compared to those who spend less time plugged in, explains the study's author, Jean Twenge, a professor of psychology at San Diego State University.

Twenge's research suggests digital abstinence is not good either. Teens who have no access to screens or social media may feel shut out, she says.

But there may be a sweet spot. According to the survey data, "the teens who spend a little time — an hour or two hours a day [on their devices] — those are actually the happiest teens," Twenge says.

At its best, technology connects us to new ideas and people. It makes the world smaller and opens up possibilities.

"The ability to connect with people across the world is one the great benefits," Odessa believes. She says she's made some of her friends "purely online."

"We need to wrestle with it more," her mother says.

Technology is not going away. Our lives are becoming more wired all the time. But Shlain and Odessa say taking a weekly break helps their whole family find a happy medium in dealing with their phones.