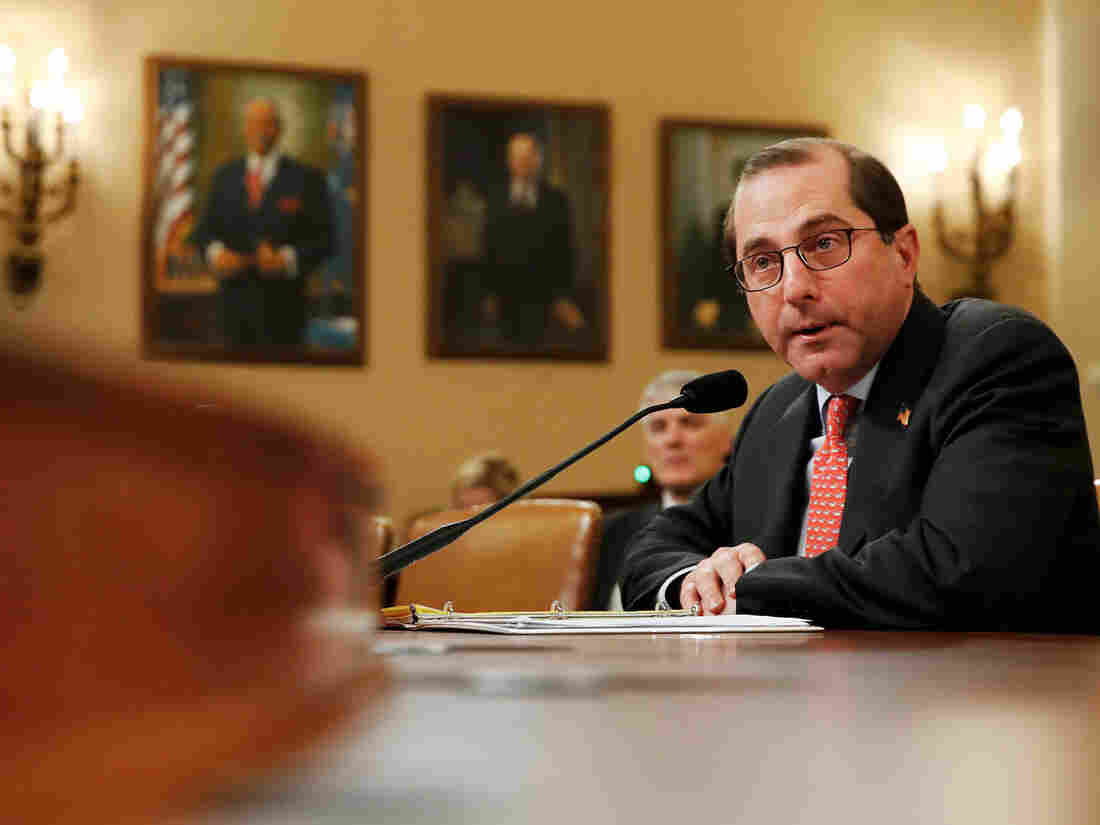 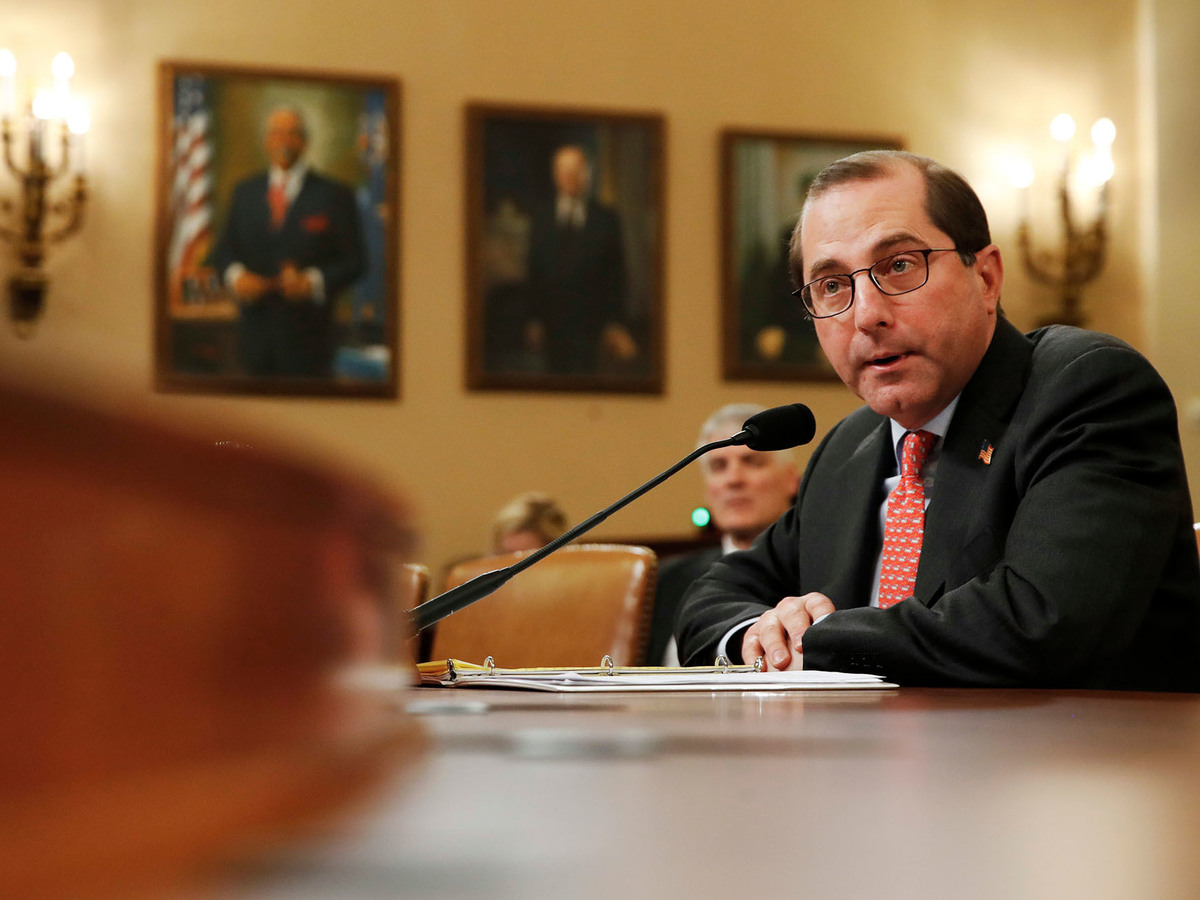 It's barely been two weeks since Idaho regulators said they would allow the sale of health insurance that doesn't meet all of the Affordable Care Act's requirements — a controversial step some experts said would likely draw legal scrutiny and, potentially, federal fines for any insurer that jumped in.

And on Wednesday, Blue Cross of Idaho unveiled a menu of new health plans that break with federal health law rules in several ways, including setting premiums based on applicants' health.

"We're trying to offer a choice that allows the middle class to get back into insurance coverage," said Dave Jeppesen, the insurer's executive vice president for consumer health care.

The insurer filed five plans to the state for approval and hopes to start selling them as soon as next month.

The Blue Cross decision ups the ante for Alex Azar, the Trump administration's new Health and Human Services secretary. Will he use his authority under federal law to compel Idaho to follow the ACA and reject the Blues plans? Or will he allow state regulators to move forward, perhaps prompting other states to take more sweeping actions?

At a congressional hearing Wednesday, even as Blue Cross rolled out its plans, Azar faced such questions. "There are rules," Azar said. "There is a rule of law that we need to enforce."

However, he didn't specifically indicate whether the federal government would step in.

Idaho's move stirs up more issues about the stability of individual insurance markets.

Policy analysts say that allowing lower-cost plans that don't meet the ACA's standards to become more widespread will pull younger and healthier people out of Obamacare, raising prices for those who remain. Supporters say that is already happening, so the lower-cost plans provide more choices for people who earn too much to qualify for subsidies to help them purchase ACA coverage.

"Crazypants illegal," tweeted Nicholas Bagley, a law professor at the University of Michigan and former attorney with the civil division of the U.S. Department of Justice, who said that states can't pick and choose which parts of federal law to follow. Sabrina Corlette, a research professor at Georgetown University's Center on Health Insurance Reforms, pointed out that health insurers could be liable for sharp fines if they are found to be in violation of the ACA.

But both Idaho regulators and Blue Cross officials say they aren't worried.

Jeppesen said the ACA gives states regulatory authority "to make sure the market works and is stable," and the insurer is simply "following what the state has given us guidance" to do.

Other insurers in Idaho are taking a much more cautious approach, telling The Wall Street Journal they aren't stepping up immediately to offer their own plans.

Laszewski said they are likely waiting to see what legal challenges develop. "If I were running an insurance company, there's no way I would stick my neck out until the high court has ruled in favor of this — and they're not going to," he said.

Jeppesen said his company has consulted with legal experts and is moving ahead with confidence. The aim is to bring people back into the market, particularly the young, the healthy and those who don't get a tax credit subsidy and can't afford an ACA plan.

For some people — especially younger or healthier applicants — the new plans, which the insurer has named Freedom Blue, cost less per month than policies that meet all ACA rules.

They accomplish that by limiting coverage. If they are allowed to be sold, consumers will need to weigh the lower premiums against some of the coverage restrictions and variable premiums and deductibles, policy experts say.

The plans, for example, will include a "waiting period" of up to 12 months for any pre-existing conditions if the applicant has been without coverage for more than 63 days, Jeppesen said.

Additionally, they cap total medical care coverage at $1 million annually. And premiums are based, in part, on a person's health: The healthiest consumers get rates 50 percent below standard levels, while those deemed unhealthy would be charged 50 percent more.

All those conditions violate ACA rules, which forbid insurers from rejecting coverage of preexisting conditions or setting dollar caps on benefits or higher premiums for people with health problems.

But the rates may prove attractive to some.

Premiums for a healthy 45-year-old, for example, could be as low as $195 a month, according to a comparison issued by the insurer, while a 45-year-old with health problems could be charged $526. In that case, the 45-year old would find a lower price tag — $343 a month — for an ACA-compliant bronze plan.

While Freedom Blues plans cover many of the "essential health benefits" required under the ACA, such as hospitalization, emergency care and mental health treatment, they do not include pediatric dental or vision coverage. One of the five plans doesn't include maternity coverage.

When compared with one of the Blues' ACA-compliant plans — called the Bronze 5500 — the new standard Freedom Blue plan's annual deductibles are a mixed bag.

That's because it has two separate deductibles — one for medical care and one for drugs. If a consumer took only generic drugs, the new plan would be less expensive, according to details provided by the plan. But with a $4,000 deductible for brand-name drugs, the Freedom Blue plan requires more upfront money before full coverage kicks in than the ACA-compliant plan it was compared with.

Jeppesen said the insurer hopes to attract many of the "110,000 uninsured state residents who cannot afford [ACA] coverage."

That's the total number of uninsured people who earn more than 100 percent of the federal poverty level in the state, he said.

Sarah Lueck, senior policy analyst for the Center on Budget and Policy Priorities, cautioned that some of those residents might actually be eligible for subsidies under the ACA, which are available to people earning up to four times as much.

"Many ... could be getting subsidies for more comprehensive coverage through the [ACA-compliant state exchange] and would be better off," Lueck said.