Accessibility links
Sunset Labs Bill For Drug Test Stuns Texas Student : Shots - Health News Elizabeth Moreno got hit with a $17,850 bill from a Texas lab after leaving a urine sample at her doctor's office. The lab had tested the sample for a wide range of legal and illicit drugs. 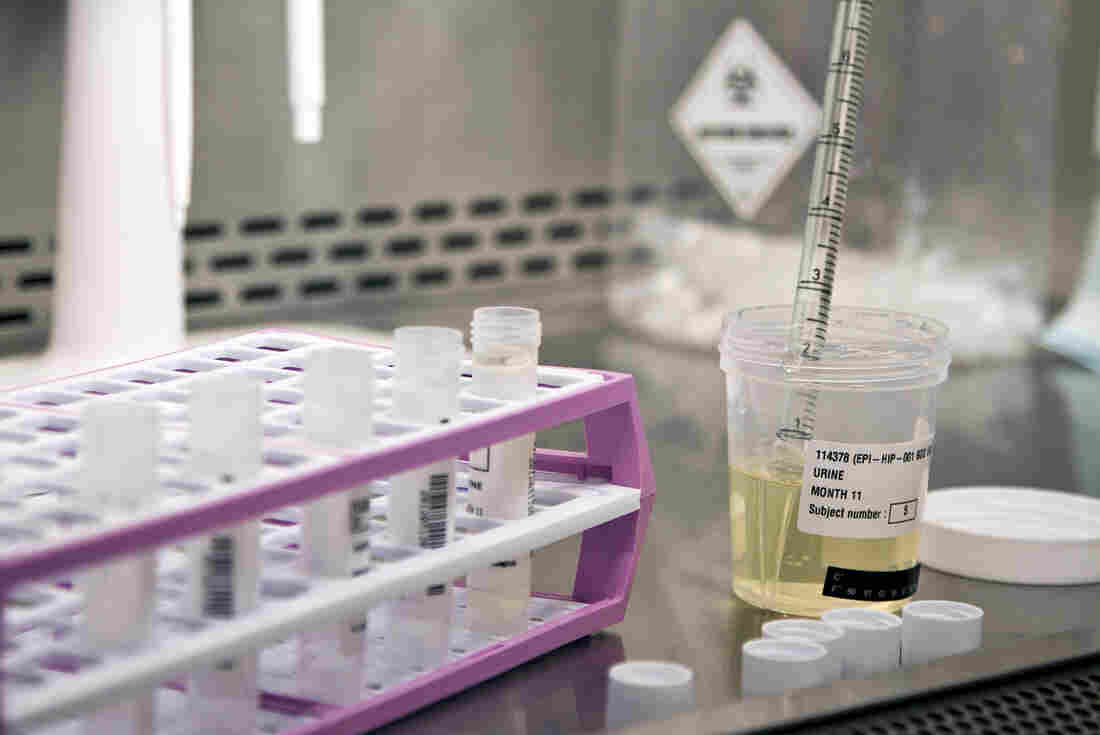 Urine testing to diagnose illness or to detect the presence of drugs is generally routine. But a woman who gave her doctor a urine sample months after back surgery got socked with a huge bill. SPL/Science Source hide caption 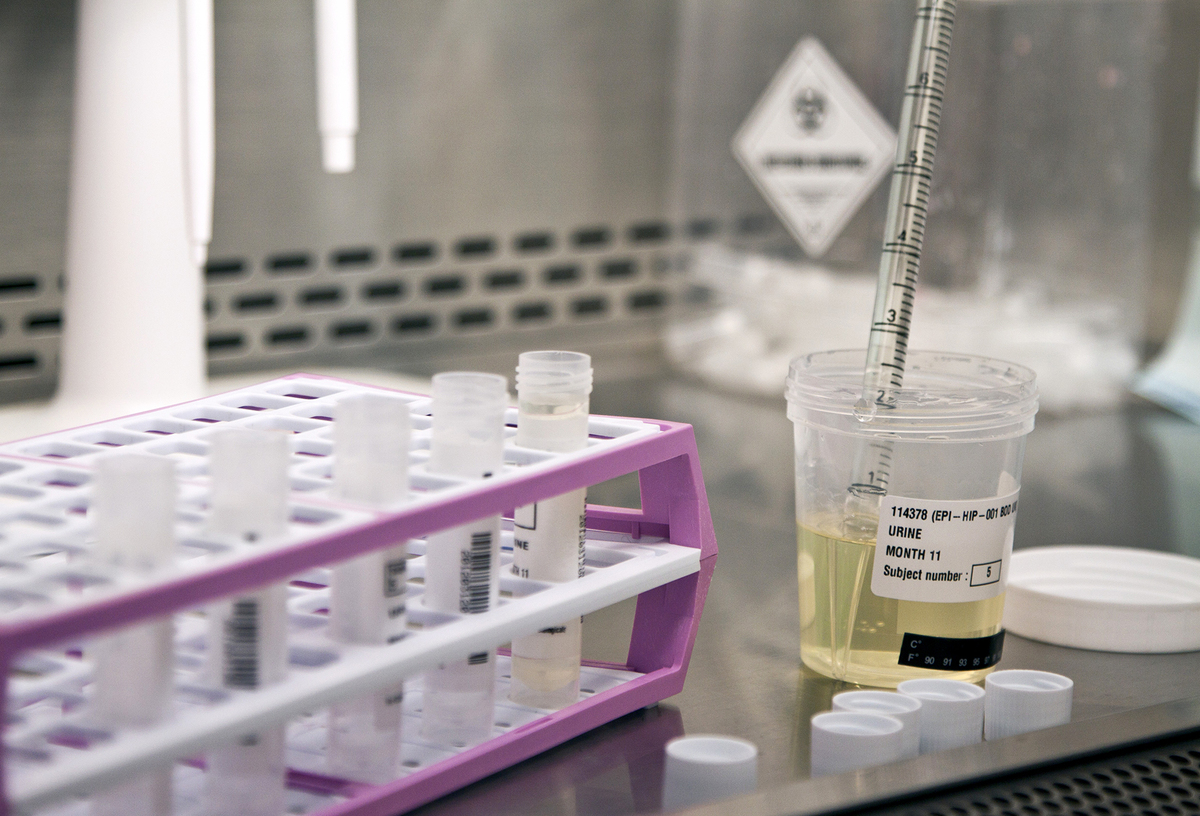 Urine testing to diagnose illness or to detect the presence of drugs is generally routine. But a woman who gave her doctor a urine sample months after back surgery got socked with a huge bill.

After Elizabeth Moreno had back surgery in late 2015, her surgeon prescribed an opioid painkiller and a follow-up drug test that seemed routine — until the lab slapped her with a bill for $17,850.

A Houston lab had tested her urine sample for a constellation of legal and illicit drugs, many of which Moreno says she had never heard of, let alone taken.

"I was totally confused. I didn't know how I was going to pay this," said Moreno, 30, who is finishing a degree in education at Texas State University in San Marcos, and is pregnant with twins.

Her bill shows that Sunset Labs LLC charged $4,675 to check her urine for a slew of different types of opioids: $2,975 for benzodiazepines, a class of drugs for treating anxiety, and $1,700 more for amphetamines. Tests to detect cocaine, marijuana and phencyclidine, an illegal hallucinogenic drug also known as PCP or angel dust, added $1,275 more.

The lab also billed $850 to test for buprenorphine, a drug used to treat opioid addiction, and tacked on an $850 fee for two tests to verify that nobody had tampered with her urine specimen.

Total bill: $17,850 for lab tests that her insurer, Blue Cross and Blue Shield of Texas, refused to cover, apparently because the lab was not in her insurance network. The insurer sent Moreno an "explanation of benefits" that says it would have valued the work at just $100.92.

Moreno's father, in a complaint to the Texas attorney general's office about the bill, identified the Houston surgeon who ordered the costly test as Dr. Stephen Esses. His office told Kaiser Health News the surgeon would have no comment.

Sunset Labs is part of a network of pain clinics and other medical businesses founded by Houston anesthesiologist Phillip C. Phan, according to Texas secretary of state filings and court records. Court records say Phan's companies also own the facility where Moreno had her operation.

Three experts contacted by KHN said the lab grossly overcharged; they also doubted the need for the test.

"This just blows my mind," said Jennifer Bolen, a former federal prosecutor and lab and pain management consultant. "It's very high and incredibly out of the norm."

Dan Bowerman, a medical fraud expert, called the lab bill "outrageous" and "unconscionable" and said it should have prompted an investigation.

"Sounds real fishy," added Charles Root, a veteran industry adviser. He wondered if the lab had "misplaced the decimal point," because such a test should cost a few hundred dollars, tops.

Sunset's billings "are in line with the charges of competing out-of-network labs in the geographical area," lab attorney Justo Mendez said in an emailed statement.

Mendez said pain doctors agree that extensive urine testing is "the best course of action" and that a lab "is not in the position" to question tests ordered by a doctor.

Urine testing for patients with chronic pain has grown explosively over the past decade amid a rising death toll from opioid abuse. Pain doctors say drug testing helps them make sure patients are taking the drugs as prescribed and not mixing them with illegal substances.

Yet the testing boom costs billions of dollars annually and has raised concerns that some labs and doctors run urine tests needlessly — or charge exorbitant rates — to boost profits.

Some insurers have refused to pay, which can leave patients like Moreno threatened with ruinously high bills they had no idea they had incurred. 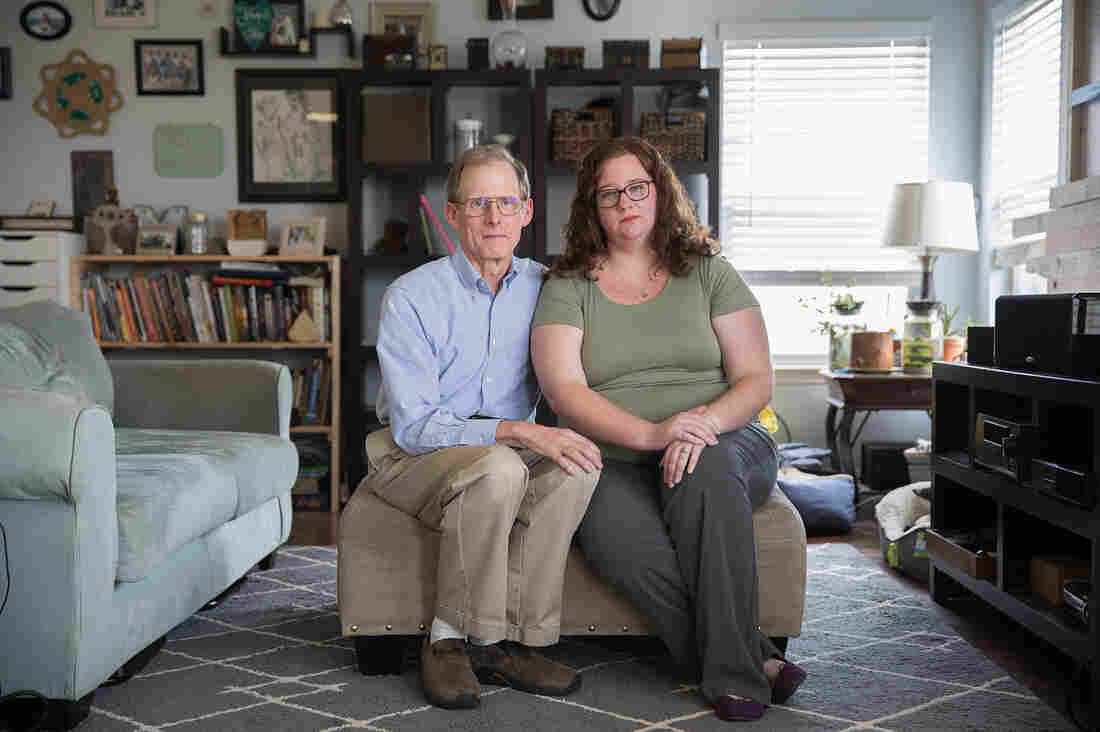 Liz Moreno thought she was done paying for her back surgery in 2015 until a $17,800 bill for a urine drug test showed up nine months later. Her father, Paul Davis, a retired doctor from Ohio, settled the bill with the company for $5,000 to protect Liz's credit rating. Julia Robinson for KHN hide caption 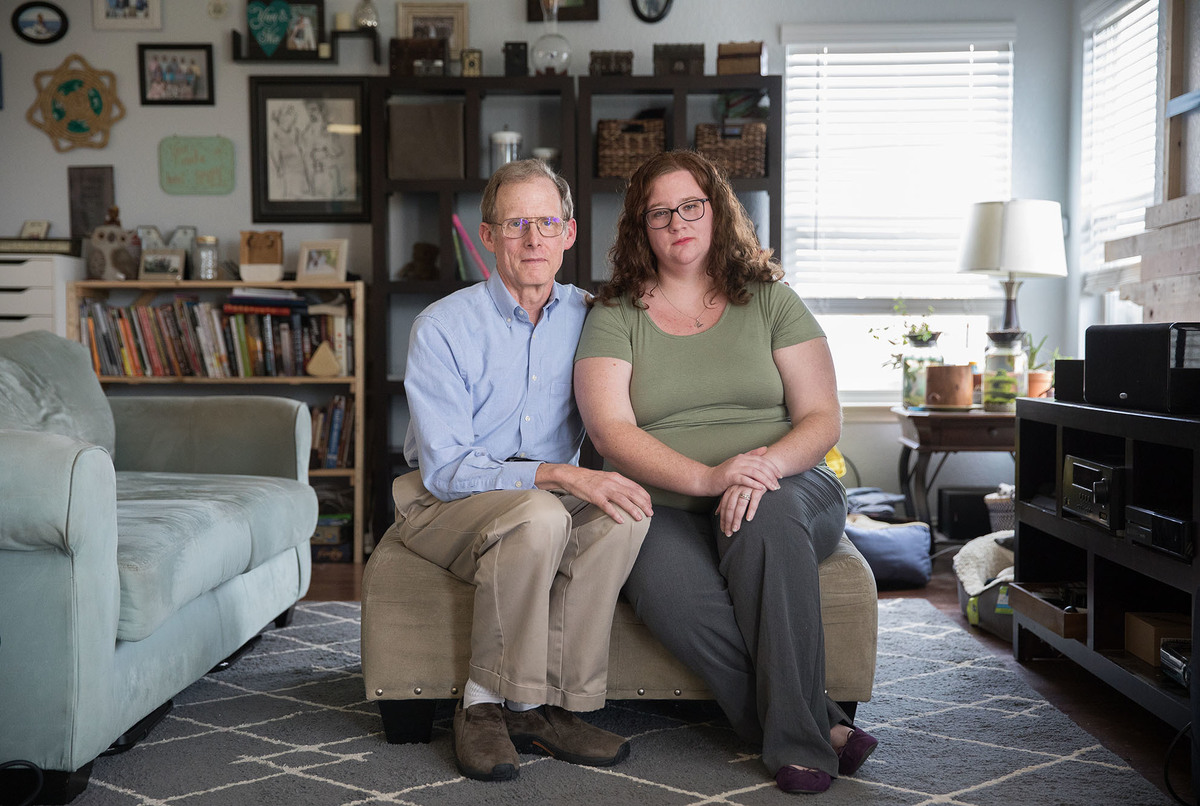 Liz Moreno thought she was done paying for her back surgery in 2015 until a $17,800 bill for a urine drug test showed up nine months later. Her father, Paul Davis, a retired doctor from Ohio, settled the bill with the company for $5,000 to protect Liz's credit rating.

Moreno said her insurance covered the disc removal surgery in December 2015. She said the operation went well and she weaned herself off the hydrocodone pain pills. To her surprise, during a second appointment return about a month later, the surgeon's office asked her to leave a urine sample.

"I didn't think anything of it," Moreno said of the test. "I said fine, whatever."

More than a year later, she said, the lab phoned while she was driving and asked her to pay the $17,850 bill. The lab then sent her an invoice, dated March 10, 2017, which states: "based upon information from your health plan, you owe the amount shown."

Luckily, her father, Dr. Paul Davis, was visiting her in Texas at the time. Davis, 66, is a retired family practice doctor from Findlay, Ohio.

Davis doubted the need for the test, not to mention what he thought was a sky-high price. He said the University of Findlay, where he helped train physician assistants, gave applicants a basic drug test at a cost of $174, while the local juvenile courts in Ohio paid $10 for a simple drug screen.

Fearing the bill would ruin his daughter's credit scores, Davis said, he called Sunset and settled it in April 2017 by paying $5,000, which he said he now regrets. The lab sent Moreno a receipt that said it discounted her bill because of "financial need/hardship."

"We are disappointed as well as concerned about transparency whenever [any] member is surprised by an excessive charge for a seemingly routine service or received services that may not have been medically necessary."

Campbell also said the lab was out-of-network and "we do not control how much they charge for services rendered." The insurer encourages patients to confirm that all medical care they seek comes from medical providers in the Blue Cross network, he added.

Prices for urine tests can vary widely depending upon complexity and the technology used. Some doctors' offices use a simple cup test, which can detect several classes of drugs on the spot. These tests rarely cost more than $200, and typically much less.

7 Ways You Can Protect Yourself From Outrageous Medical Bills

Bills climb higher when labs check for levels of multiple drugs and bill for each one, a practice insurers argue is seldom medically justified. But even labs sued by insurers alleging wildly excessive testing typically have billed $9,000 or less, court records show. One insurer sued a lab for charging $1,845 for a drug test, for instance.

Davis said Sunset Labs ignored his requests for a full explanation of the charges. In May, he filed a written complaint about the bill with the Texas attorney general's office that included a copy of the bill and accused the lab of "price gouging of staggering proportions."

"Young people just starting out, such as my daughter, may not have the ability to pay and this could result in damaged credit ratings or even bankruptcy," he wrote.

Davis got a letter back from Attorney General Ken Paxton, who said the office would "review the information." A spokesperson for Paxton told KHN: "We have received complaints about that business, but we can't comment on anything else." Sunset attorney Mendez said the lab is "not aware" of any such complaints.

In an interview, Davis also questioned the need for his daughter's urine test because she received opioids only for a short period and the results would have had no impact on her treatment. In his complaint to the attorney general, Davis said the surgeon told him he ordered the tests because he feared possible retribution from the state medical licensing board for not testing patients who had been prescribed an opioid. The Texas Medical Board doesn't require urine tests for patients receiving opioids for short-term pain, said spokesman Jarrett Schneider. That's a "question of independent medical judgment as to whether the physician believes a drug test should be required," he said.

Sunset Labs has an "F" rating with the Houston Better Business Bureau, which on its website posts an August 2017 complaint from a patient charged $16,150 for a urine test.

"This is not covered under my health insurance so I am expected to pay this excessive bill," the complaint reads.

A second website that publishes government billing numbers of doctors and medical businesses includes a comment section with more than a dozen negative "reviews," mostly complaints that the lab slammed patients with thousands of dollars in fees their insurers balked at paying.

In a pair of lawsuits filed in 2015, three doctors seeking to quit working at pain clinics operated by Phan accused the facilities of improper billing practices, including unnecessary urine testing. The doctors said they feared losing their medical licenses unless they severed their ties.

In one suit, Drs. Purvi Patel and Lance LaFleur also alleged that the pain clinics "pressured" doctors to overprescribe medical gear and genetic tests to insured patients "regardless of medical necessity." The case did not go forward because the doctors did not pursue it. Neither doctor would comment.

In the second legal case, pain specialist Dr. Baominh Vinh said he resigned in April 2015 "based on certain questionable business practices ... that are inconsistent with my ethical boundaries." Vinh also alleged urine testing was overused. In a countersuit against Vinh, the pain clinics called his allegations a "falsehood" to justify violation of his employment contract.

The parties settled in March of last year. Terms are confidential, but a lawyer for the pain clinics said Vinh paid money to the company "and not vice versa."

This is the debut of a monthly feature from Kaiser Health News and NPR that will dissect and explain real medical bills in order to shed light on prices in U.S. health care and to help patients learn how to be more active in managing costs. Do you have a medical bill that you'd like us to see and scrutinize? Submit it here and tell us the story behind it.