Accessibility links
Brain's Ancient Immune System May Play A Role In Alzheimer's : Shots - Health News Their first epiphanies came during musings over beer, and evolved into a decade of teamwork. Two Harvard researchers explain why they think Alzheimer's disease may be traced to an immunity glitch. 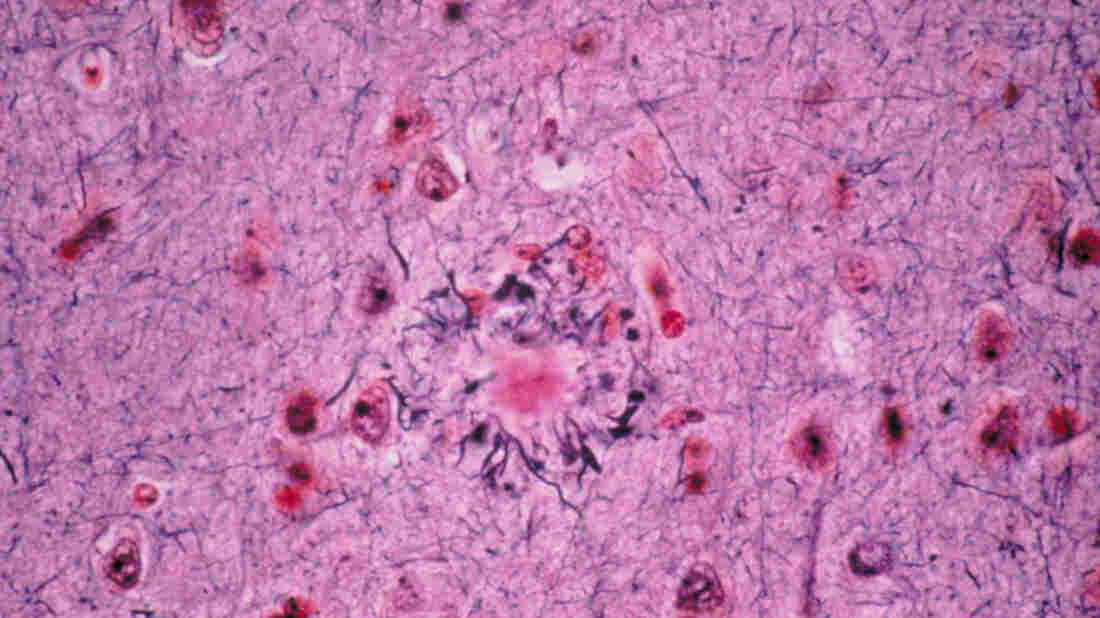 This light micrograph of a part of a brain affected by Alzheimer's disease shows an accumulation of darkened plaques, which have molecules called amyloid-beta at their core. Once dismissed as all bad, amyloid-beta might actually be a useful part of the immune system, some scientists now suspect — until the brain starts making too much. Martin M. Rotker/Science Source hide caption 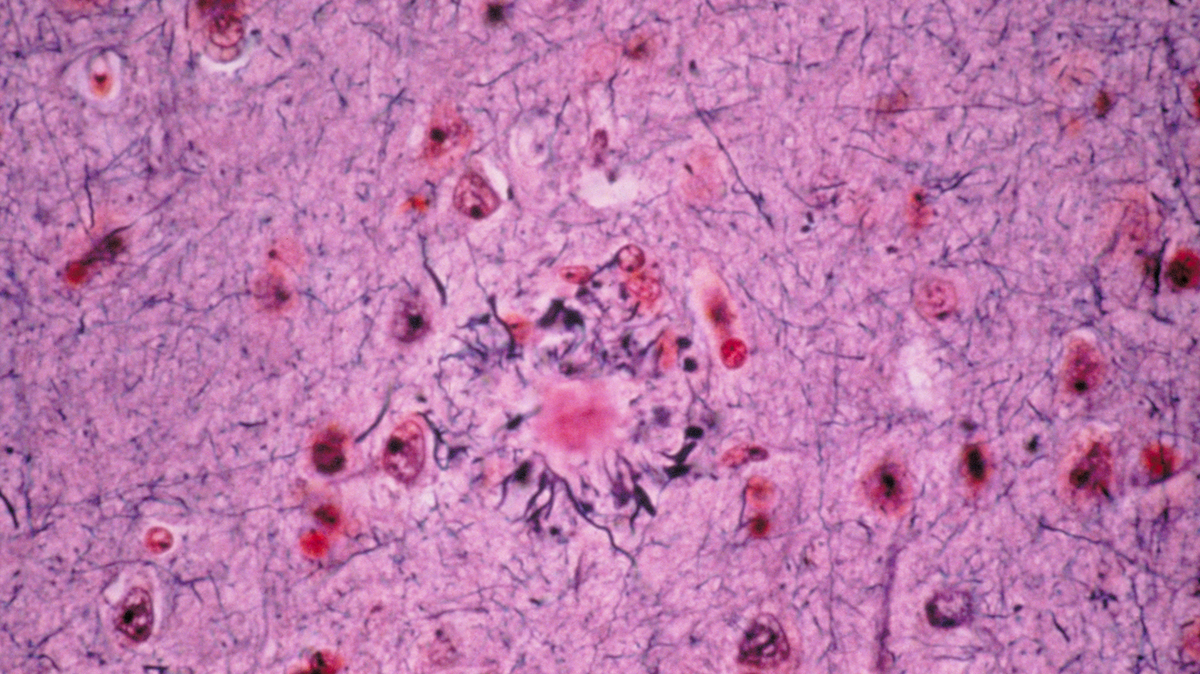 This light micrograph of a part of a brain affected by Alzheimer's disease shows an accumulation of darkened plaques, which have molecules called amyloid-beta at their core. Once dismissed as all bad, amyloid-beta might actually be a useful part of the immune system, some scientists now suspect — until the brain starts making too much.

Beer has fueled a lot of bad ideas. But on a Friday afternoon in 2007, it helped two Alzheimer's researchers come up with a really a good one.

Neuroscientists Robert Moir and Rudolph Tanzi were sipping Coronas in separate offices during "attitude adjustment hour" at Massachusetts General Hospital, Harvard's largest teaching hospital. And, by chance, each scientist found himself wondering about an apparent link between Alzheimer's disease and the immune system.

Moir had been surfing through random scientific papers online — something he does for an hour or so on most Fridays. "I cruise wherever my fancy takes me," he says.

And on this day, he cruised to research on molecules known as antimicrobial peptides. They're part of the ancient immune system that's found in all forms of life and plays an important role in protecting the human brain.

One way antimicrobial peptides protect us is by engulfing and neutralizing a germ or some other foreign invader. That gives newer parts of the immune system time to get mobilized.

These peptides are "extremely important," Moir says. "They're not like legacies from an immune system we don't use anymore. If you don't have them, you're going to die in a couple of hours."

As Moir surfed through paper after paper, he realized that one of these ancient molecules, known as LL-37, looked a lot like a molecule closely associated with Alzheimer's. That molecule is called amyloid-beta and it forms the sticky plaques that tend to build up in the brains of people with dementia.

LL-37 and Amyloid-beta "looked just like peas in a pod," Moir says.

That was really surprising. Even more surprising, on that same Friday afternoon, Moir's colleague Tanzi had also noticed a connection between Alzheimer's and the ancient immune system, which scientists refer to as innate immunity.

Tanzi had been spending the same hour that Friday afternoon reviewing a list of genes he'd found that were somehow related to Alzheimer's. "I was enjoying my first or second Corona," he says, "and I noticed that many of the genes coming up were involved with innate immunity."

"I was like, well, what does that mean?" Tanzi says. "So I wandered into [Moir's] office, carrying my Corona in hand, and I said, 'What do you know about innate immunity in the brain?' "

The two researchers decided to team up to figure out precisely how innate immunity figures into Alzheimer's. They later sketched out their research plan while sipping Bordeaux on the deck of Tanzi's house along the coast.

"We spent a lot of evenings out there making a dent in his very nice cellar," Moir says.

The two scientists began to discuss a wild idea. What if amyloid-beta was an integral part of the ancient immune system? What if those sticky plaques were actually an effort to protect the brain by encapsulating foreign invaders?

Their idea was that the brain was producing amyloid for much the same reason an oyster forms a pearl — for self-defense. "Maybe amyloid plaques are a brain pearl," Moir says, "a way for our body to trap and permanently sequester these invading pathogens."

That was a pretty radical idea. For decades, most scientists thought amyloid-beta was no more than a toxic waste product. "In all those scenarios it's bad, bad, bad, bad, bad," Moir says.

But Moir and Tanzi suspected amyloid-beta was usually good — unless the brain started making too much. Then it could kill brain cells and lead to dementia.

This hypothesis was not immediately embraced by other scientists, Tanzi says.

"I had folks emailing me, ex-mentors — Nobel laureates — saying, 'Rudy have you lost your mind?' Luckily neither Rob nor I have a really good track record of listening to people."

So. Tanzi and Moir set out to prove that amyloid really is part of the immune system. And they were lucky enough to have a funder, the Cure Alzheimer's Fund, that was willing to take a chance on their idea.

The effort took years. But in 2010, Moir, Tanzi, and their team demonstrated that amyloid is really good at killing viruses and bacteria in a test tube. And, in 2016, they showed it did the same thing in worms and mice.

"It was very clear that amyloid protected against infection," Tanzi says. "If a mouse had meningitis or encephalitis, [and] if that mouse was making amyloid it lived longer." In contrast, mice that did not produce amyloid died quickly from the infection.

Today, Tanzi and Moir's wild idea is no longer considered so wild. Lots of scientists are now studying the ancient immune system's connection to Alzheimer's.

And Tanzi says it's become clear that Alzheimer's involves a lot more than just plaques and tangles in the brain.

The question now is: What's causing the glitch in the ancient immune system?

One possibility is that it's overreacting to viruses and bacteria that get into the brain. Or, the system could be getting confused and attacking healthy cells — a lot like what happens in diseases like lupus or multiple sclerosis.

If either idea holds up, it may be possible to interrupt the process before it causes Alzheimer's, Moir says. "That's a pretty good outcome from a couple of Coronas 10 years ago."