Accessibility links
How Some Breast Cancer Survivors Escape Lymphedema : Shots - Health News When many lymph nodes are removed along with a tumor, some patients develop painful and debilitating swelling — lymphedema. More doctors should recognize and help prevent the problem, surgeons say. 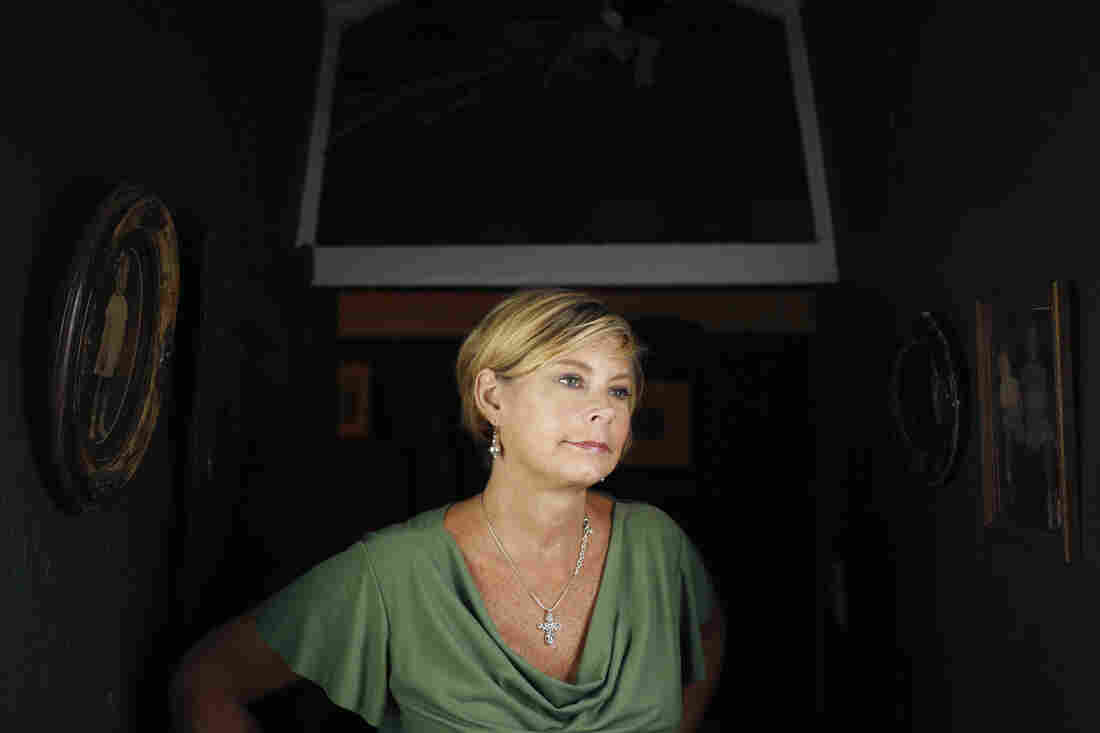 Virginia Harrod, an attorney and county prosecutor who lives in rural Kentucky, survived breast cancer, only to develop lymphedema, which sent her to the hospital three times with serious infections. A lymph node transplant helped restore her immune system. Luke Sharrett for NPR hide caption 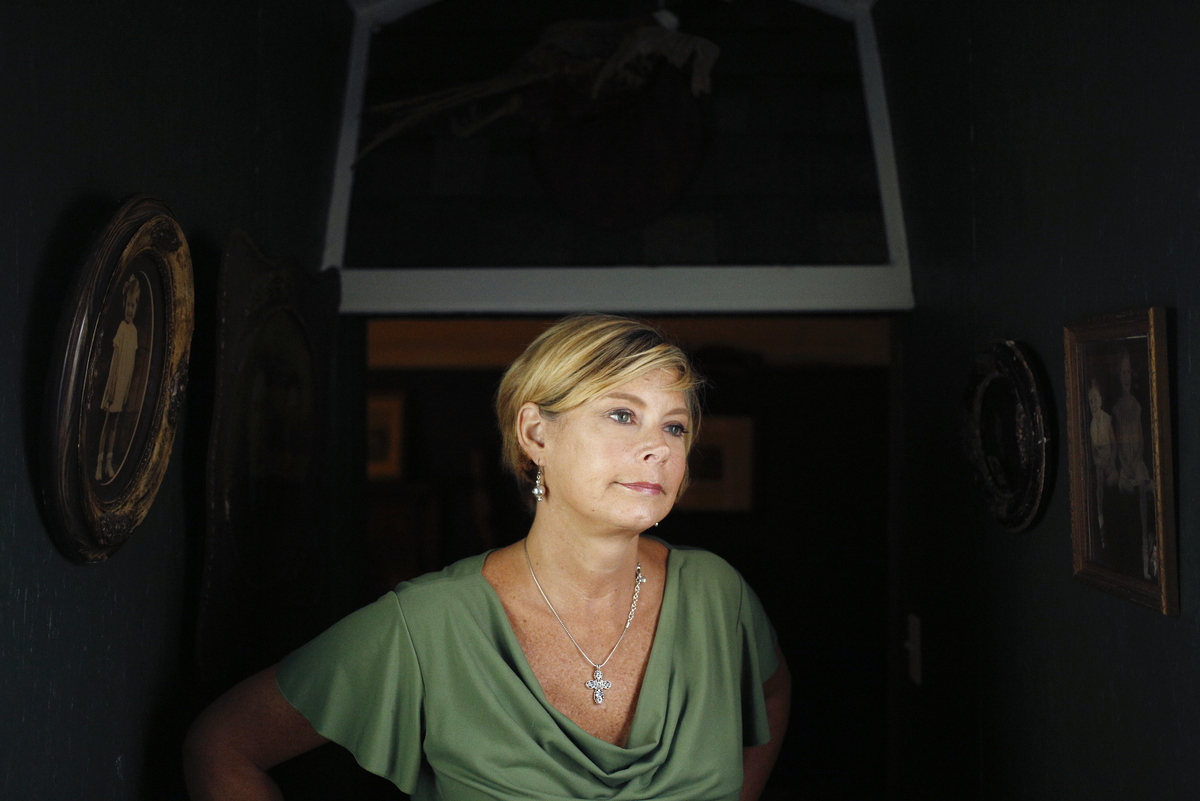 Virginia Harrod, an attorney and county prosecutor who lives in rural Kentucky, survived breast cancer, only to develop lymphedema, which sent her to the hospital three times with serious infections. A lymph node transplant helped restore her immune system.

After Virginia Harrod was diagnosed with stage 3 breast cancer in 2014, she had a double mastectomy. Surgeons also removed 16 lymph nodes from under her armpit and the area around her breast, to see how far the cancer had spread and to determine what further treatment might be needed. Then she underwent radiation therapy.

As it turned out, the removal of those lymph nodes, along with the radiation, put Harrod at risk for another disorder — lymphedema, a painful and debilitating swelling of the soft tissue of the arms or legs, and/or an increased vulnerability to infection.

The lymph system problem she developed months after her surgery was a direct result of her lifesaving cancer treatment.

"Cancer was a piece of cake," Harrod says. "It was the lymphedema that almost killed me."

In recent years, oncologists have begun paying more attention to the physical, emotional and financial costs of a condition they say is a "common and underreported complication of cancer treatment."

No longer content to rely on compression clothing and bandages, antibiotics and massaging of limbs to minimize lymphedema's symptoms, some cancer surgeons have been pioneering procedures to restore a healthy lymph system in these patients, or, better yet, prevent the problem.

Often referred to as the body's natural sewage system, the lymph system is a network of nodes — small filters containing immune cells — linked by minuscule tubes and channels that carry nutrients around the body and help eliminate dangerous microbes and damaged cells, such as cancer cells.

When that lymph network is blocked or otherwise compromised — by scarring and inflammation from radiation treatments, for example, or by removal of a number of lymph nodes — fluid can build up in the areas near where the nodes used to be. That's lymphedema.

As the fluid backs up, and nearby limbs often begin to swell, patients with lymphedema can have difficulty moving — picking up a grocery bag, or even getting dressed.

For some people, a sudden infection is the first symptom.

Harrod is a county prosecutor in Kentucky, and was able to return to work just 10 days after her mastectomy. Her recovery from cancer seemed to be proceeding well, she says, until the day — nine months after the surgery — when her cat scratched her hand.

She didn't think much of it, she says, until the next day.

Harrod figured it was hives, but her doctor recognized the symptoms as a serious and advancing infection — cellulitis — and sent her to the hospital for IV antibiotics.

Harrod was in the hospital for eight days, and that's when she first learned she had lymphedema. Over the next 10 months, she was readmitted twice more with dangerous infections.

Having even one node removed conveys some risk of lymphedema, doctors say — perhaps 5 to 7 percent. And medical studies suggest that cancer patients who, like Harrod, have many more nodes removed have about a 20 percent likelihood of developing the disease. Undergoing radiation therapy can increase the risk of lymphedema in those patients to 40 percent.

It's usually a lifelong condition. Still, many people have never heard of it. 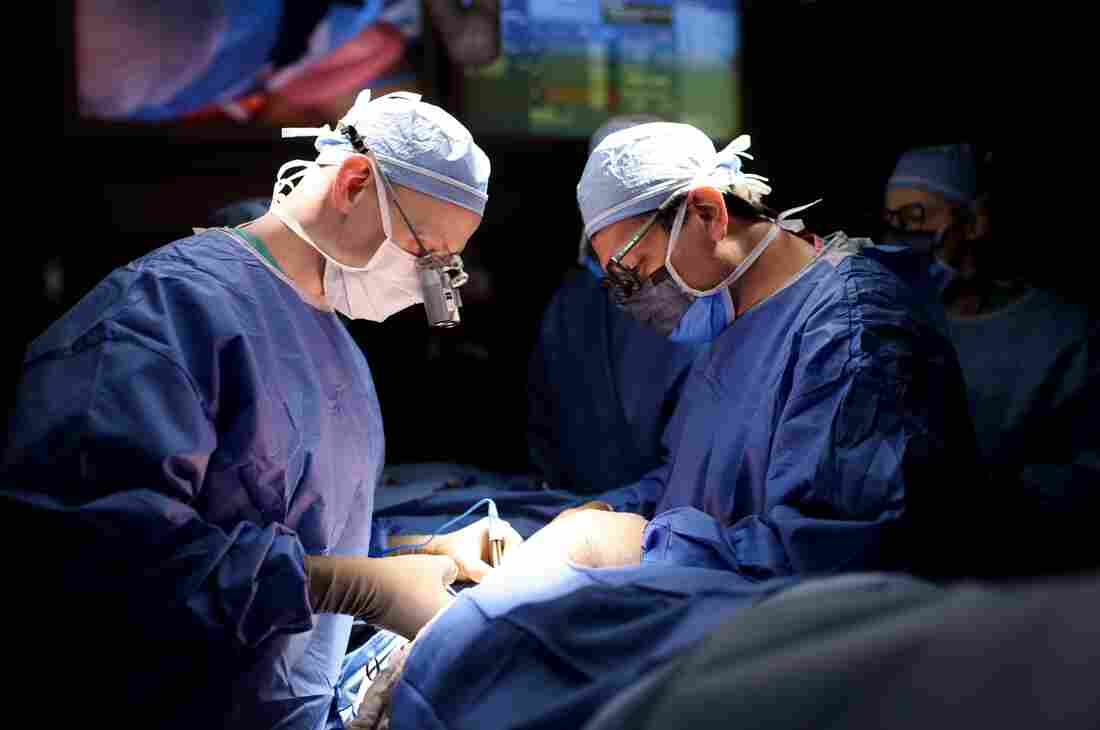 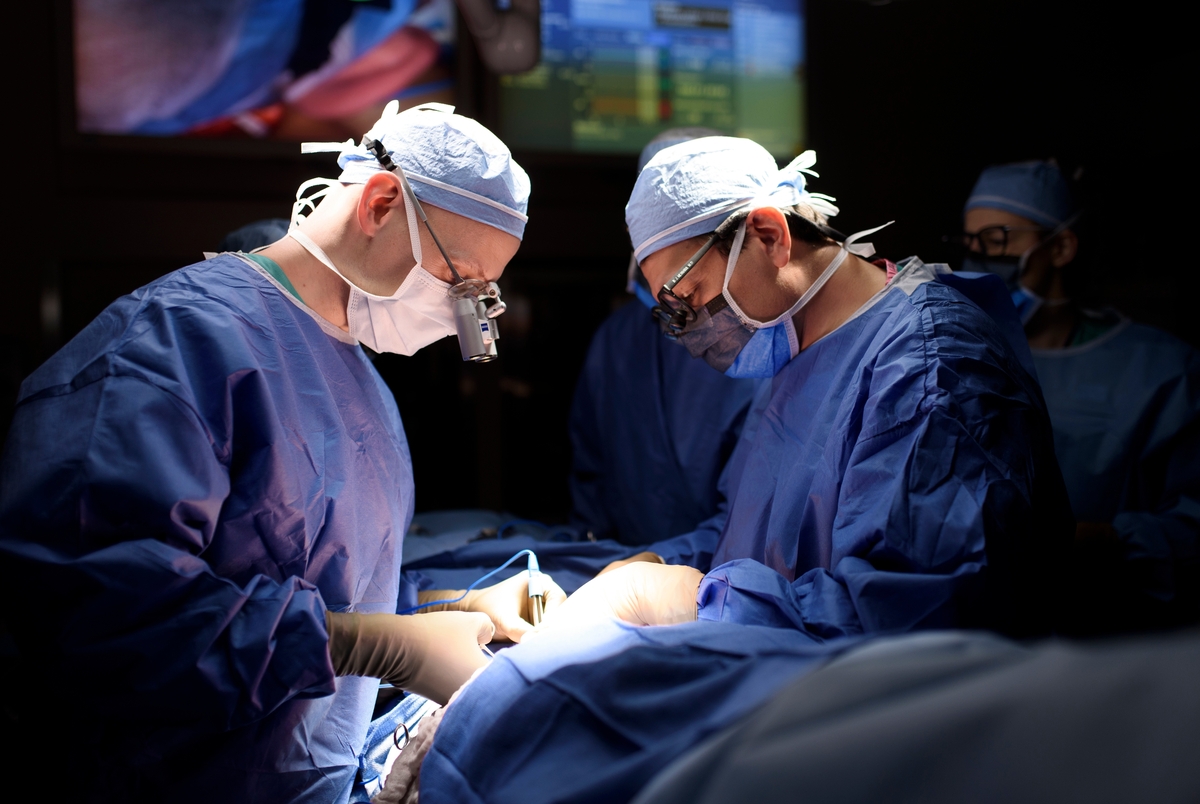 Dr. Joseph H. Dayan (left) and Dr. Babak Mehrara are plastic and reconstructive surgeons at Memorial Sloan Kettering Cancer Center. Lymph node transfer has been around for about a decade, Dayan says, but recent advances in imaging have improved the technique's chances for success.

Dr. Joseph H. Dayan, a reconstructive surgeon with Memorial Sloan Kettering Cancer Center, says he sees patients every week who have survived breast cancer but break down in tears in his office.

"They're crying, not only because they struggle with lymphedema," he says, "but because many people, including some doctors, do not recognize this as a debilitating condition" that can require laborious, daily care.

"People just don't see it," Dayan says. "They don't see the disability." Even for many doctors, he says, "lymphedema is overshadowed by the fact that cancer is the priority."

In 2016, after a third serious infection, Harrod heard from another health care provider that Dayan was successfully transplanting clusters of healthy lymph nodes from unaffected areas of the body.

After a series of tests ensured she was a good candidate, Harrod had two clusters of nodes transplanted from her abdomen into her armpit and forearm.

For her, the results have been amazing, Harrod says — "like I never, ever had a problem with lymphedema."

Dayan explains that the node transfer procedure has been around for about a decade; but recent advances in imaging now help surgeons pinpoint which clusters of nodes are best to safely use — and that can vary from patient to patient.

"You can actually see the lymphatic system itself — a delicate, beautiful network of vessels," Dayan says. 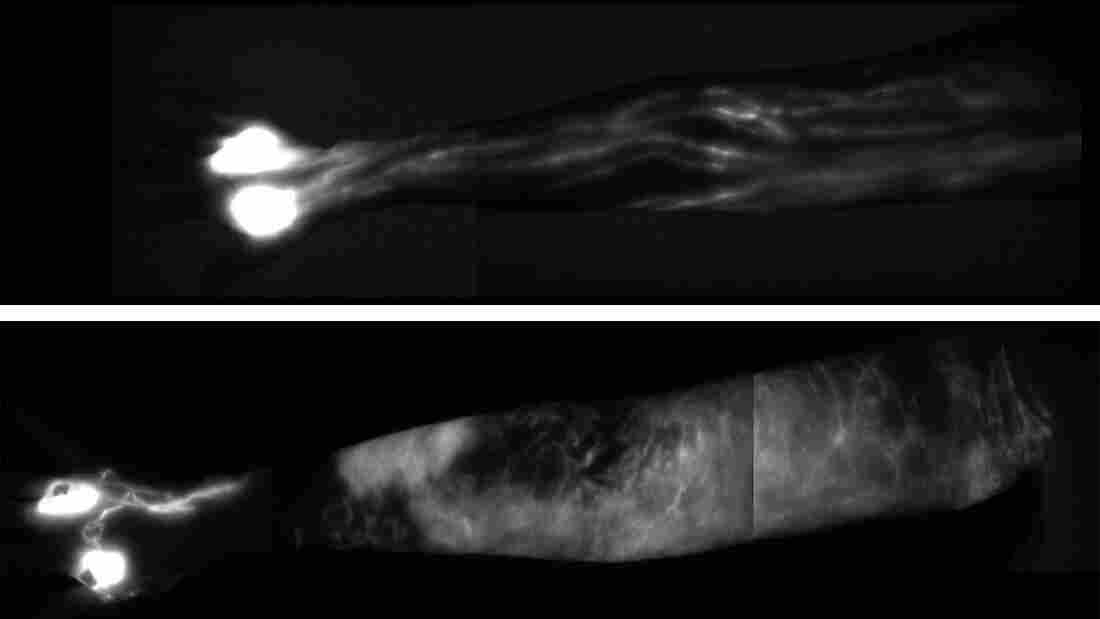 The image of a normal upper arm (top) shows the delicate network of healthy lymph vessels. In the lower image of a patient with lymphedema, a collection of lymph fluid, in white, has made the arm swell. Courtesy of Memorial Sloan Kettering Cancer Center hide caption 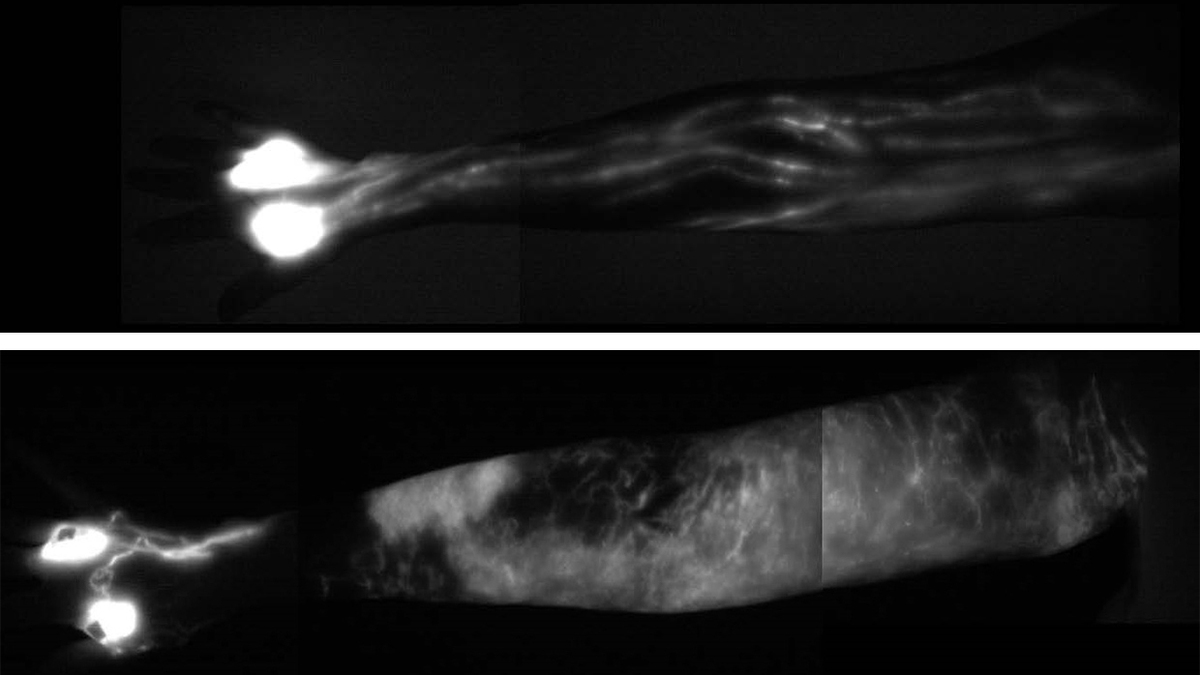 The image of a normal upper arm (top) shows the delicate network of healthy lymph vessels. In the lower image of a patient with lymphedema, a collection of lymph fluid, in white, has made the arm swell.

"It's like an angiogram of the heart — you can see any disease, any scarring." Even in areas that haven't yet produced obvious pain or swelling.

The node transfer procedure is not a cure, Dayan says, but it can dramatically reduce the symptoms of lymphedema, especially when the condition is caught early.

Meanwhile, at Montefiore Health System in New York, surgeon Sheldon Marc Feldman has been helping to pioneer another type of surgery — this one aimed at preventing lymphedema from the get-go. He is the senior author of guidelines developed by a multidisciplinary team on the diagnosis and treatment of lymphedema.

When Feldman must remove nodes during cancer surgery, instead of tying off the lymphatic vessels, he reconnects them to a nearby vein, to preserve as much of the body's natural drainage system as possible.

"So the risk of lymphedema is dramatically reduced," Feldman says, among those considered good candidates for the procedure. "In my study, 4 percent incidence of lymphedema, as opposed to 30 to 40 percent in the group that didn't have it."

Luana DeAngelis is one of Feldman's patients. She's 49 and a breast cancer survivor who, after her initial diagnosis in 2004, started a foundation called You Can Thrive to provide treatment information and resources to other cancer survivors.

DeAngelis had worked with Feldman and knew about his research, she says, so when her cancer recurred, and had spread to both breasts, she reached out.

"I knew if he was going in to remove a lot more lymph nodes that I had a very high risk of lymphedema," DeAngelis says. "And I said to him, 'Please, if you need to go in and take a lot out, let's talk about this lymphovenous bypass.' "

DeAngelis had 22 lymph nodes removed and — so far – has developed no trace of lymphedema.

Right now, lymph node transfer and lymphovenous bypass are performed at only a handful of academic medical centers in the U.S. and about two-dozen around the world. Not all insurance plans cover the cost.

Feldman says he hopes that, as research continues, the advanced surgical techniques will become more widely available — dramatically reducing a cancer survivor's risk of a debilitating side effect of treatment.