Accessibility links
Anthem On Cataract Surgery: Anesthesiologists Not Needed Most Of The Time : Shots - Health News The insurer says it is not usually medically necessary to have an anesthesiologist or nurse anesthetist on hand most of the time during the common surgery. 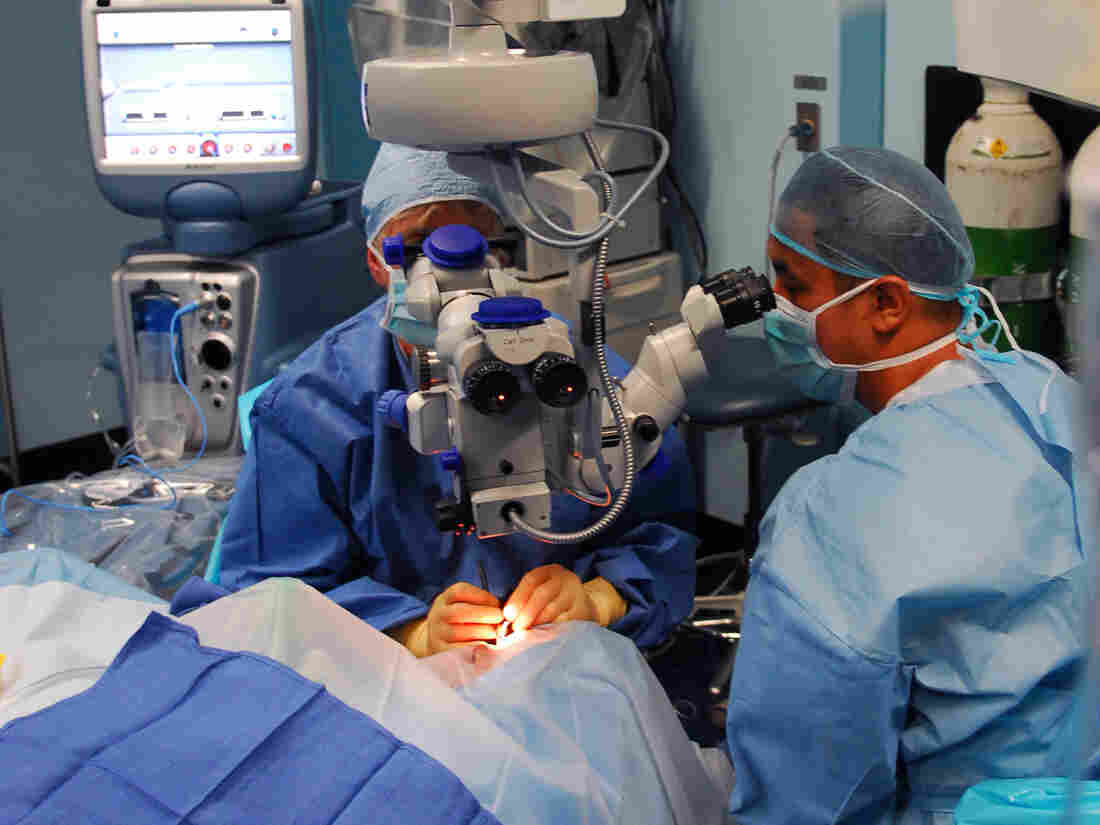 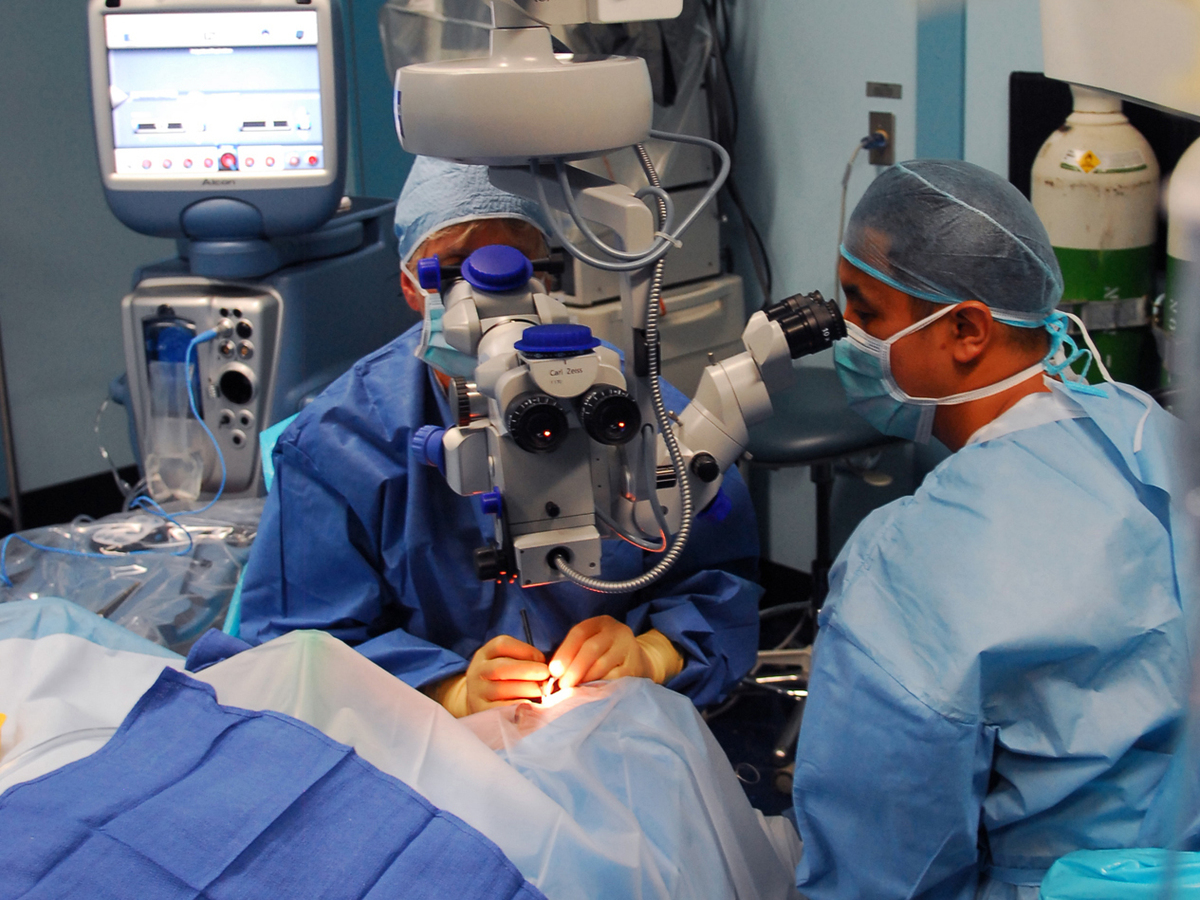 If you need cataract surgery, your eye surgeon may have to do double duty as your anesthetist under a new policy by health insurer Anthem. In a clinical guideline released this month, the company says it's not medically necessary to have an anesthesiologist or nurse anesthetist on hand to administer and monitor sedation in most cases.

Some ophthalmologists and anesthesiologists say the policy jeopardizes patient safety, and they are calling on Anthem to rescind it.

"The presence of anesthesia personnel is one of the key ingredients in the patient safety and effectiveness of cataract surgery today," says Dr. David Glasser, an ophthalmologist in Columbia, Md., who is secretary for federal affairs at the American Academy of Ophthalmology, a professional group for eye physicians and surgeons. "An ophthalmologist cannot administer conscious sedation and monitor the patient and do cataract surgery at the same time."

Anthem, which offers commercial insurance plans in 14 states, says anesthesia needs vary and so should coverage. According to a statement from the company:

"Anthem's Medical Policy and Technology Assessment Committee, a majority of whom are external physicians, reviewed the available evidence addressing the use of general anesthesia and monitored anesthesia care for cataract surgery. According to the literature reviewed, there is no one definitive approach regarding the use of anesthesia for cataract surgery and patient-specific needs should be taken into consideration as well as potential risk of harm to individuals who are sedated during surgical procedures."

A cataract, typically related to aging, is caused by clumps of protein that cloud the lens of the eye and can distort vision. During a cataract operation, the surgeon makes an incision in the surface of the eye with a laser or blade and then uses a tool to break up the clouded lens, pull it out and replace it with an artificial one.

If you're putting a knife in my eye, that's not routine for me.

Leah Binder, president and CEO of the Leapfrog Group

Cataract surgery is common. More than half of Americans have either had a cataract or had cataract surgery by the time they reach age 80, according to the National Eye Institute.

Surgery is typically performed on an outpatient basis and takes less than an hour. Though drowsy while sedated, patients are generally conscious during the procedure and can hear what's said to them and speak if necessary.

Eye surgeons often have an anesthesiologist or a nurse anesthetist present to administer intravenous drugs to help keep the patient relaxed and ensure they don't move during the operation as well as monitor their vital signs and adjust medication as necessary.

Anthem's new policy states that this type of monitored anesthesia care is medically necessary only if the patient is under 18 years old, or is unable to cooperate or communicate because of dementia or other medical conditions, can't lie flat, has known problems with anesthesia, or if a complex surgery is anticipated.

But some ophthalmologists and anesthesiologists disagree.

"I wouldn't even consider doing a cataract surgery without an anesthesiologist or nurse anesthetist in the room," says Dr. David Aizuss, an eye surgeon who is president-elect of the California Medical Association. "If you're working inside the eye it's a very confined space, and if the patient gets agitated and starts moving around you have to get the equipment out of the eye very quickly."

Although Anthem posted the new policy online, providers are seeking clarification from the company about the timing of its implementation in their states, physicians said.

Until then, some practices are taking no chances. At the Freedom Vision Surgery Center in Encino, Calif., where Aizuss practices, Anthem patients who come in for cataract surgery are asked to pay $400 out-of-pocket upfront for anesthesia services.

Professional groups representing California eye physicians and anesthesiologists have written to Anthem requesting the policy be rescinded. In addition, the California Medical Association has lodged complaints with state regulators.

This isn't the first time Anthem has come under scrutiny for changes to its clinical guidelines that some have charged help the company's bottom line at patients' expense. Last year, the company said it would no longer pay for emergency department visits it later determined were not emergencies. Then in September it said it would no longer pay for imaging tests like MRIs in many cases if patients got them at hospital-owned centers rather than independent imaging centers.

Last week, Modern Healthcare reported that the company says it was modifying its ER rule so that certain types of visits would always be paid for, including those by patients who are directed to the emergency department by their provider or have recently had surgery.

Some safety experts say they were concerned about Anthem's new policy, even for routine cataract surgeries.

"If you're putting a knife in my eye, that's not routine for me," says Leah Binder, president and CEO of the Leapfrog Group, a nonprofit organization that advocates for improved safety and quality at hospitals. Noting that anesthesiologists and nurse anesthetists were pioneers in the patient safety movement, she says there are better ways for Anthem to save money than shutting them out of the operating room.

"How about identifying the surgeons who have the highest complication rates, and letting patients know about them?" she suggested.