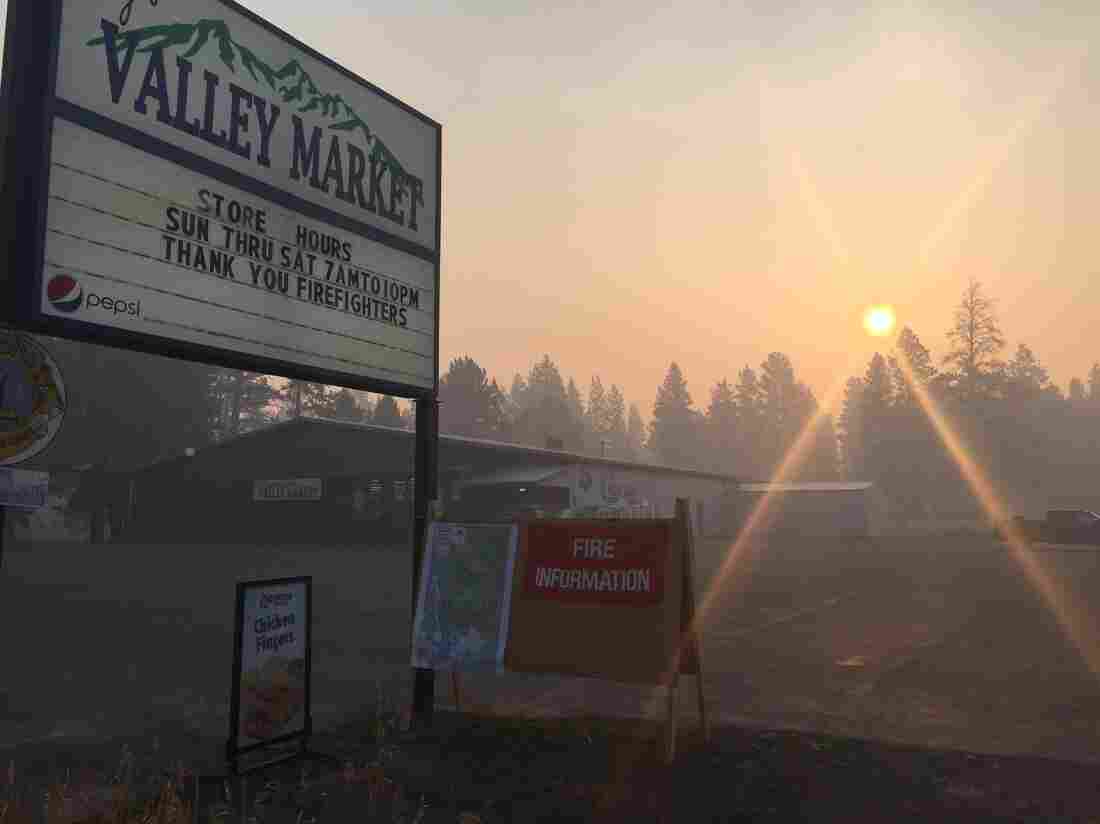 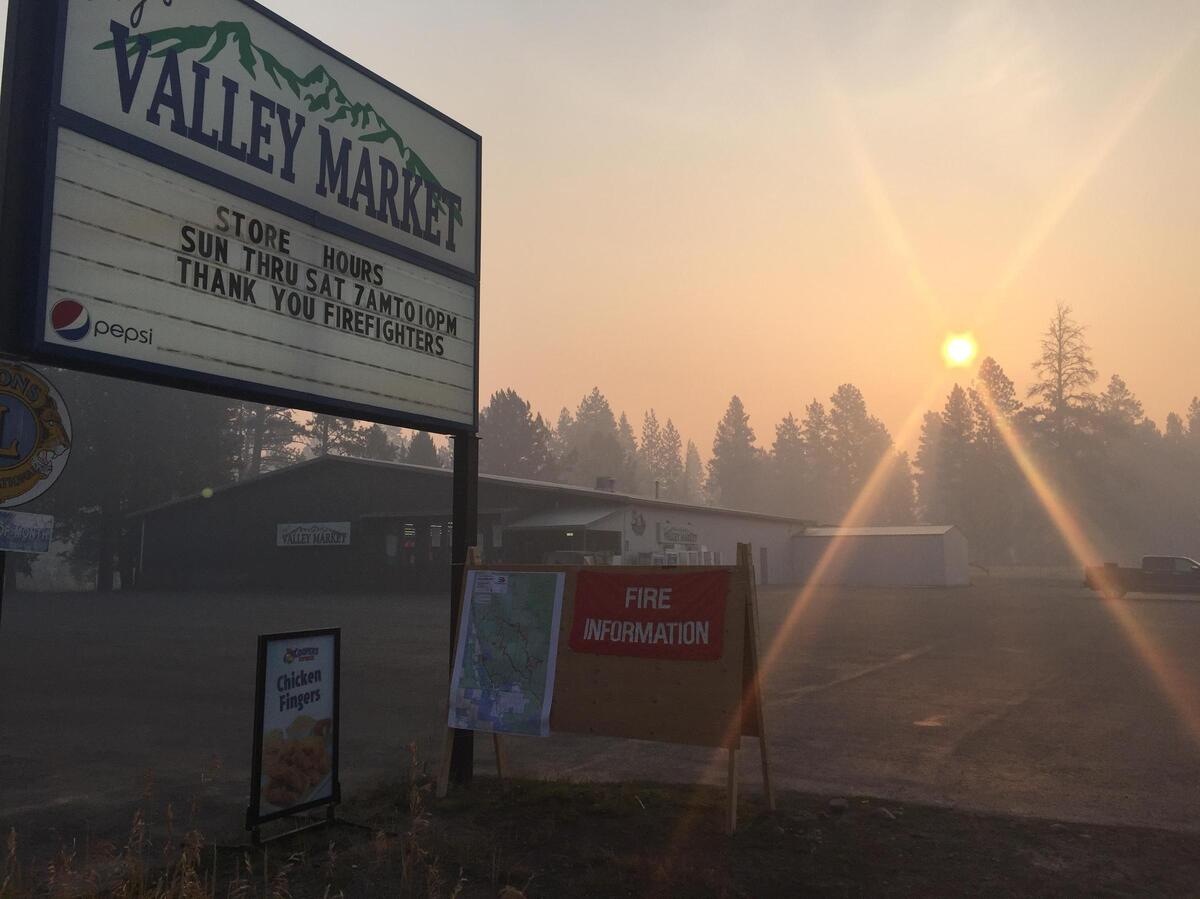 Jean Loesch and her family live in Seeley Lake, Mont., which saw the longest and most intense smoke from Montana's wildfires this summer. Loesch has 10 children, adopted or in her foster care, and they are learning what it's like to have lingering respiratory problems.

Last summer, Loesch says, the smoke was so thick outside, the family couldn't see the trees across the street, so they stayed inside. It was still really hard to breathe.

"These guys were miserable," Loesch says. "I think each one of them ended up having to go to the doctor." Everyone needed inhalers.

The family is usually pretty healthy, but not this year. Loesch got pneumonia and the kids had bloody noses. And now, even with the smoke long gone, the children are still having trouble with their lungs.

"They'll wake up hacking," Loesch says "They've all been sick. I've had to take them in for upper respiratory infections."

Seeley Lake is in Missoula County, which had several large wildfires that lasted from the end of July through mid-September — weeks longer than usual — and led to the worst season on record for wildfire smoke.

Researchers don't know a lot about what that kind of extended smoke exposure does to people. Most previous studies have focused on indoor wood-burning stoves, urban air pollution and the effects on firefighters.

But the way the smoke piled up and stuck around a whole town this summer was new. Seeley Lake is in a valley. Every day, as the sun set and evening temperatures dropped, cold air traveled down from the mountain and trapped on the valley floor the smoke from the nearby Rice Ridge fire. This phenomenon is called a temperature inversion.

As the wildfires burned on into the summer, and nights grew longer and colder, the inversions grew stronger. Over time, the accumulating smoke made it even harder for the sun to break through and warm the ground; and that intensified the effect.

The experience was really tough on residents, and it handed scientists an unusual opportunity to learn much more about the health effects of breathing smoke.

Rachel Hinnenkamp is an epidemiologist with the state health department, and has been tracking how many people went to emergency rooms complaining of respiratory-related symptoms during the 2017 wildfire season.

For people who live in Missoula and Powell counties, that number more than doubled in 2017, compared the year before.

"The number of visits in 2016 was 163 and that increased to 378. That's a statistically significant increase," Hinnenkamp says.

Researchers can't say whether all those ER visits were directly related to the Rice Ridge Fire; but Hinnenkamp says most visits happened about a month after the air in the region first became heavy with smoke.

The more a person is exposed to polluted air, the worse it is for their health.

"The smoke that we saw this year in Seeley Lake was like nothing we'd ever seen," says Sarah Coefield, the air quality specialist for the Missoula City-County Health Department. It's her job to quantify just how bad the air was.

Pollution from wildfire smoke is typically measured as the concentration of fine particulate matter, she explains. The EPA says a daily average concentration of more than 35 micrograms per cubic meter of polluted air is unhealthy.

The county's air quality monitors max out at 1000 micrograms. In Seeley Lake this summer, Coefield says the monitors maxed out 20 times.

"So there were 20 hours that we don't know what the actual number was over a thousand," she says.

Most public health guidelines aim to protect groups that are the most vulnerable to wildfire smoke in the short term — children, pregnant women, older people and those with chronic heart and lung diseases.

But the off-the-charts summer in Seeley Lake is bad news even for people who aren't at high risk, says Chris Migliaccio, an immunologist and assistant professor in the University of Montana's School of Pharmacy.

"Usually these exposures are maybe a couple weeks at high levels," Migliaccio says. "This was over a month at really unprecedented levels. We have no idea what the long term effects are."

He's part of a team of UM researchers trying to fill in those gaps in knowledge. Working with the county health department, they've started tracking a group of Seeley Lake residents, documenting changes in their physical and mental health over time.

One thing Migliaccio predicts the scientists might see is an uptick in respiratory infections — because those fine particulates in wildfire smoke can damage and even kill cells in the lungs that get rid of the harmful substances people inhale. And that leads to more people having a compromised immune system.

"I can't tell you, 'You will be susceptible. You will get the flu.' But because of these exposures, you're probably at an increased risk," he says. "We haven't done these studies. And that's something we want to follow with this Seeley Lake cohort we've started building up. Let's follow them. Let's see how they do this winter."

Right now, the biggest hurdle to getting that information is funding. The health scientists are applying for grants to keep their research going. They hope to track people for years, to find out whether the health impacts of extended smoke exposure dissipate — or linger.