Accessibility links
Blue Dreams: Drugs To Change The Mind : Shots - Health News When it comes to antidepressants and other psychotropic drugs, author Lauren Slater says, "We don't really know what we're taking into our bodies." Her new book is Blue Dreams.

Antidepressants and medications for bipolar disorder can be life-changing and even lifesaving, but journalist Lauren Slater warns that the long-term side effects of these drugs are "cloaked in mystery." 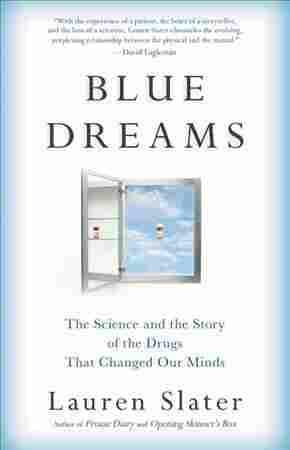 "As a nation, we're consuming them; we're gobbling them down," she says. "And we don't really know what we're taking into our bodies."

Slater, who suffers from depression and bipolar disorder, has firsthand experience with psychotropic drugs; she has been taking medication for 35 years. Her new book, Blue Dreams, dedicates separate chapters to drugs such as Thorazine, lithium and psilocybin.

Slater says she wanted to "unveil" the drugs by explaining their history, as well as how they work and the benefits and consequences for people who take them: "My goal was to almost try to make the drug into a character in and of itself. ... I wanted to bring these drugs alive."

On how Thorazine changed the way mental illness was treated

[Long] before Thorazine, people thought that mental illness was the result of what are called "humors" — blood, phlegm, bodily fluids that went out of whack. ... [Later, they] believed that it could be the result of hereditary genes gone wrong.

But then Thorazine was invented, and that sort of was the kick-start to a whole bunch of other drugs being invented and to doctors and later the public at large thinking that mental illness was biochemical in nature. ...

No one had really conceived of a drug to treat mental illness until Thorazine came along. And Thorazine was so spectacularly successful that it shifted our paradigm, and we began to think maybe we can use medicines to treat the mind.

Psilocybin is the active ingredient found in what's called magic mushrooms, otherwise known as "God's flesh." And it's being used currently in the United States to treat anxiety in end-stage cancer patients. ...

So before you take the psilocybin, you meet with the treatment team, and you go over what your goals are for the session. ... There can be many goals, but one of the primary goals would be coming to terms with your death.

And then the setting is set up. It's set up very carefully. You go to a well-appointed, comfortable, safe-looking room in the research institute. And you're encouraged to bring mementos that mean a lot to you — photos of family members, what have you.

And you're given the psilocybin, and you wear headphones. Music is pumped in — very carefully chosen music — and you have a trip. And if you get scared, or if you become overly anxious, you have two guides with you. And after the trip you process it with the treatment team. Those studies ... have been very successful in helping people come to terms with their death.

On how taking antidepressants put an end to her libido

I was on Prozac for 20 to 25 years and then I was switched to Effexor when the Prozac stopped working, but they're both serotonin-specific drugs. I credit them in part with the demise of my marriage.

For me, these drugs have not dampened my libido — they have eradicated it. And I know that I'm certainly not the only woman who feels that way. If millions of women are taking these drugs, we have to wonder what it means from a social and personal perspective.

If millions of women's libidos are either dampened or eradicated, what does that have to with a rising divorce rate and with a women's ability to find an appropriate mate? If she can't feel attraction to a man or a woman, depending on her sexual orientation, how is she going to be able to pick a mate who is suitable for her?

Sam Briger and Mooj Zadie produced and edited the audio of this interview. Bridget Bentz, Seth Kelley and Scott Hensley adapted it for the Web.