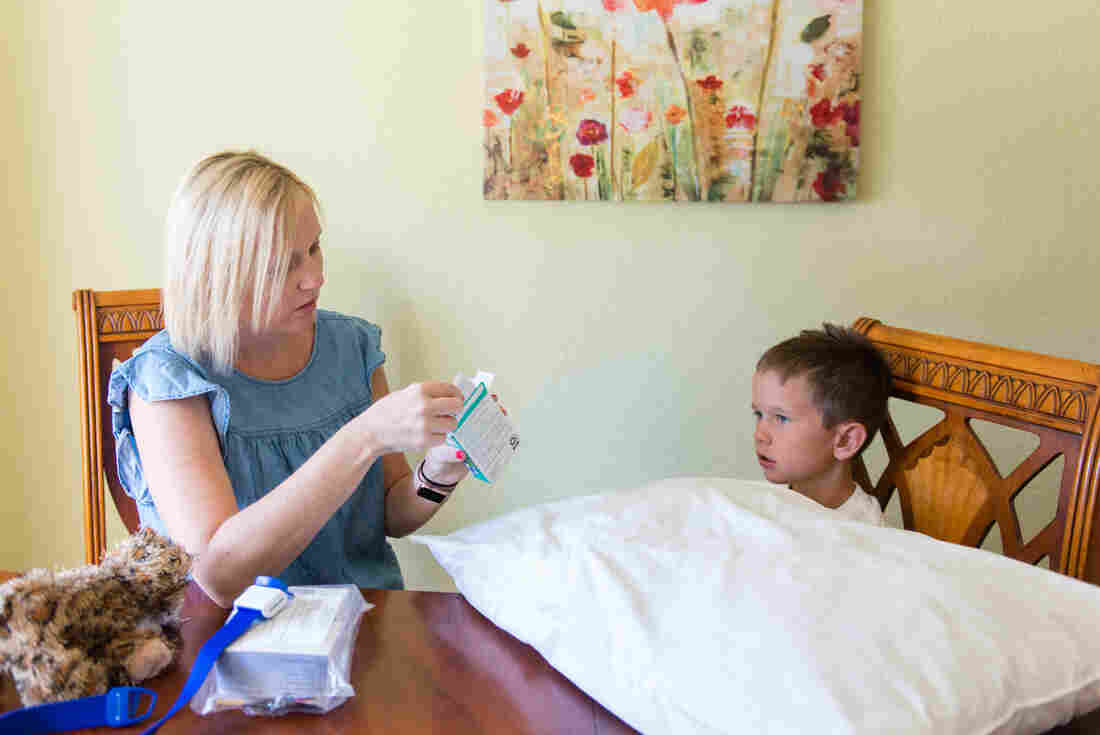 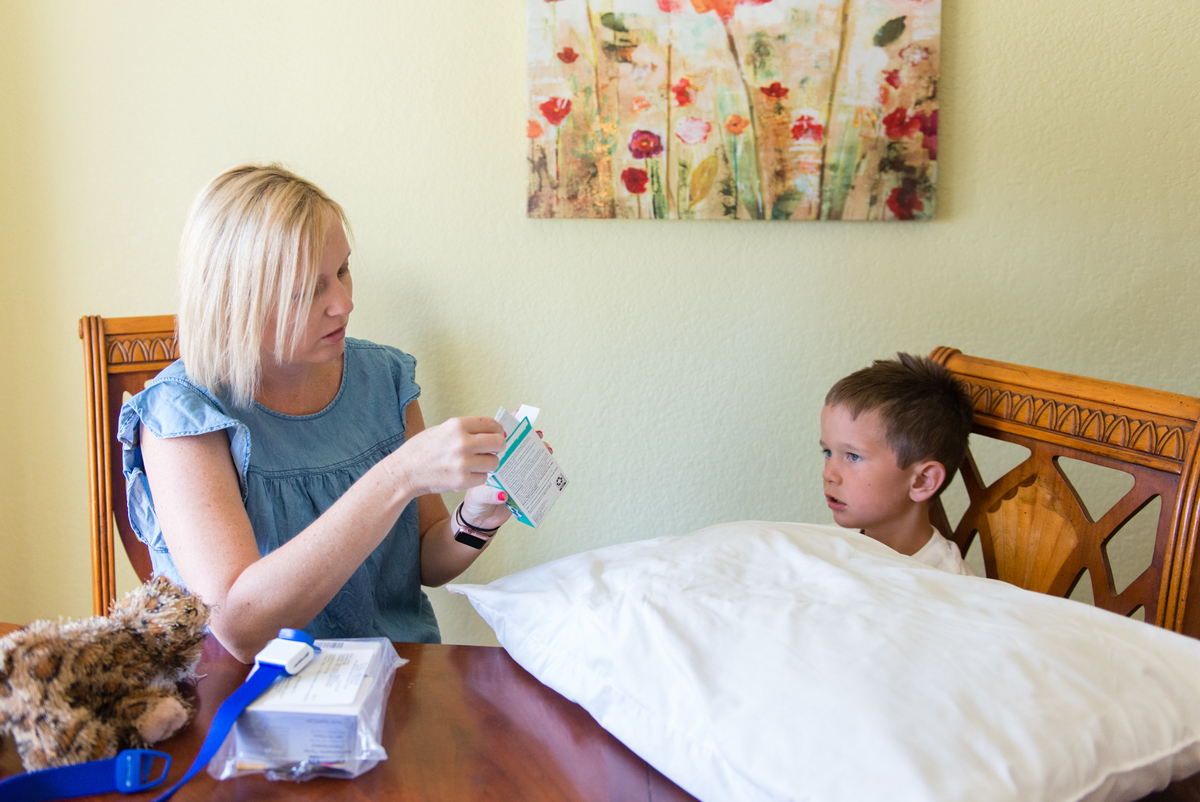 Jessica Morris prepares to inject a blood-clotting protein into son Landon's arm at their home in Yuba City, Calif.

When Landon Morris was diagnosed with hemophilia shortly after birth, his mother, Jessica Morris, was devastated. "It was like having your dreams — all the dreams you imagined for your child — just kind of disappear," she recalled.

Hemophilia, a rare bleeding disorder caused by a gene mutation that prevents blood from clotting properly, is typically passed from mother to son. Morris' grandfather had it, and she remembered hearing how painful it was. "It was almost like he was bubble-wrapped," she said. "He was coddled, because his mom didn't want him to get hurt."

But Landon's life turned out to be much different than she expected.

"He's wild. He's probably sometimes the roughest of them all," she said, as she watched the 6-year-old race around a park in Yuba City, Calif., where the family lives. "He leads a totally normal life. He plays T-ball. He'll start soccer in the fall. He runs and jumps and wrestles with his brothers." 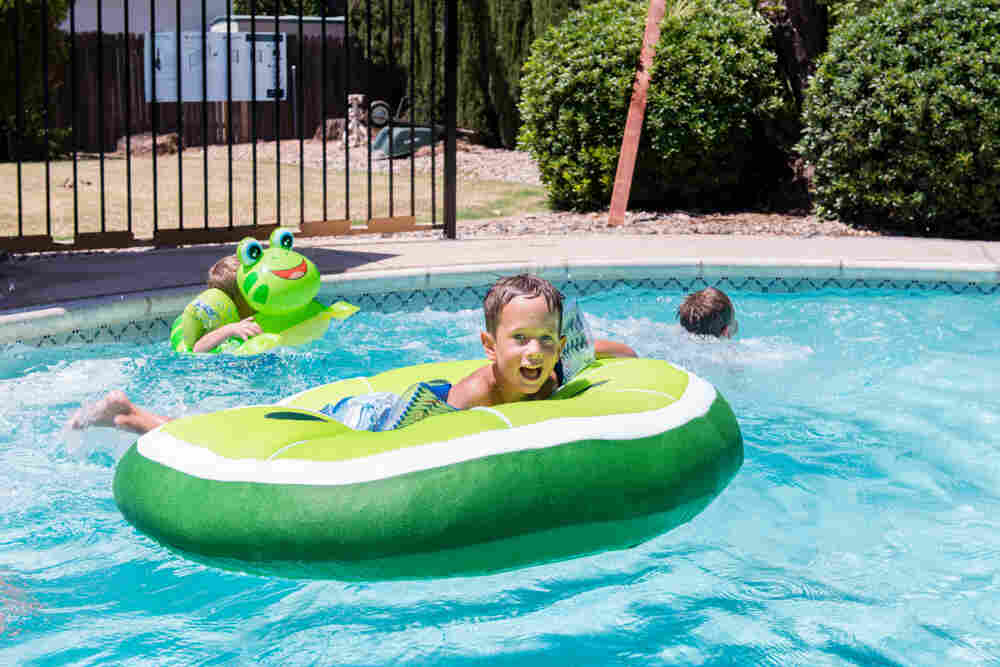 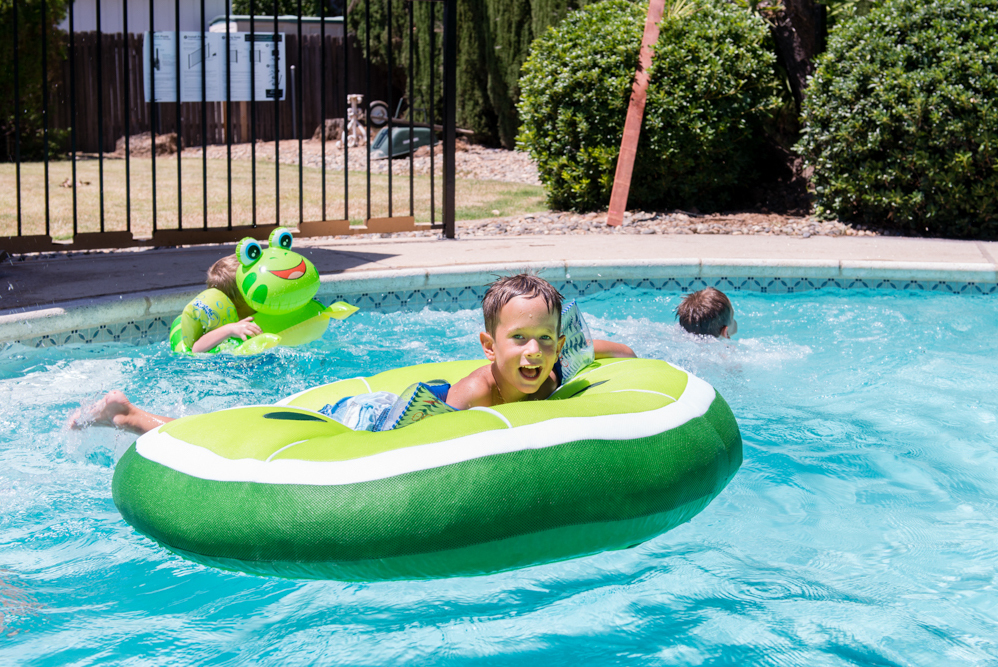 His active approach to life is made possible by his medication — the kind that wasn't available in his grandfather's day. For the Morris family, this type of drug — broadly known as clotting factor — is a miracle, helping Landon's blood clot normally. And its cost is almost entirely covered by his father's federal employee health plan.

But for the health care system, such drugs are enormously expensive, among the priciest in the nation. Medications to treat hemophilia cost an average of more than $270,000 annually per patient, according to a 2015 Express Scripts report. If complications arise, that yearly price tag can soar above $1 million. The U.S. hemophilia drug market, which serves about 20,000 patients, is worth $4.6 billion a year, according to the investment research firm AllianceBernstein.

Examining the stubbornly high cost of these medications opens a window into why some prescription drugs the United States — especially those for rare diseases — have stratospheric prices. The short answer: Competition doesn't do its traditional job of tamping down costs.

The market for hemophilia medicines in the United States is flooded with 28 different drugs, with another 21 drugs in development. Blood factor drugs are biological products — in this case, a protein — and there are no cheaper copies, called biosimilars, available. Not only do prices rise steadily as each new product comes on the market, demand is growing — and pushing costs upward — as more and more clotting factor is used to prevent bleeding episodes, not just to treat them.

Yet competition has not brought prices down in the way someone "operating at the level of undergrad Econ 101 would expect," said Jerry Avorn, a professor at Harvard Medical School who studies prescription drug costs. 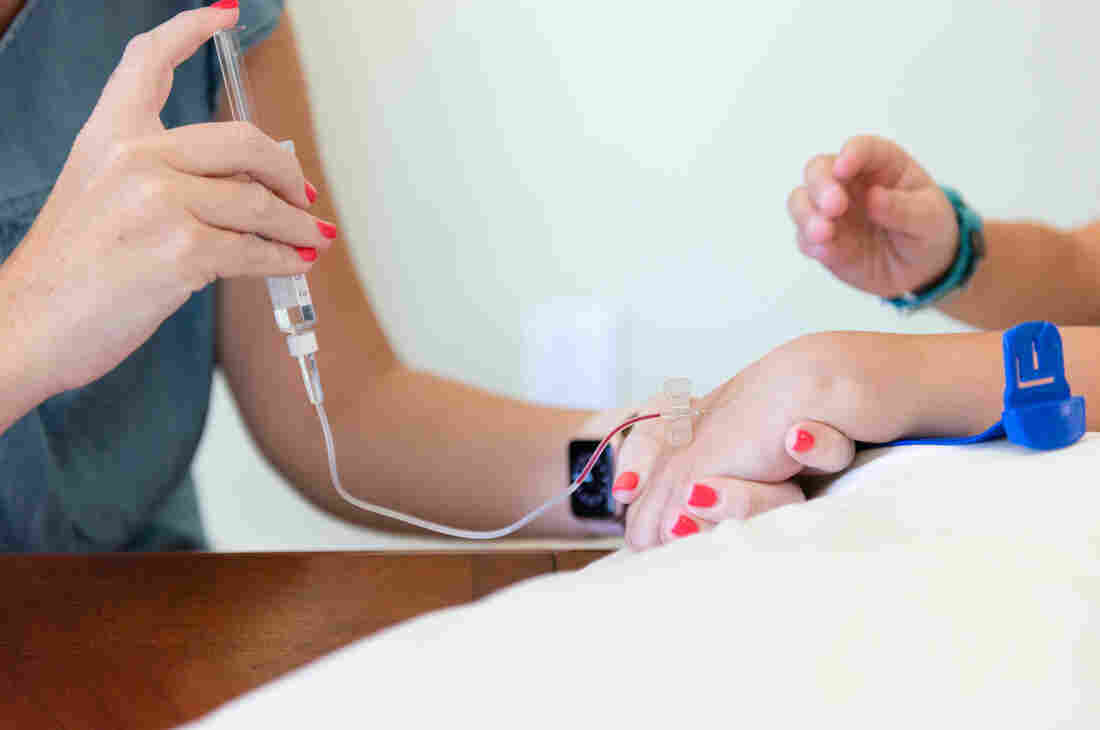 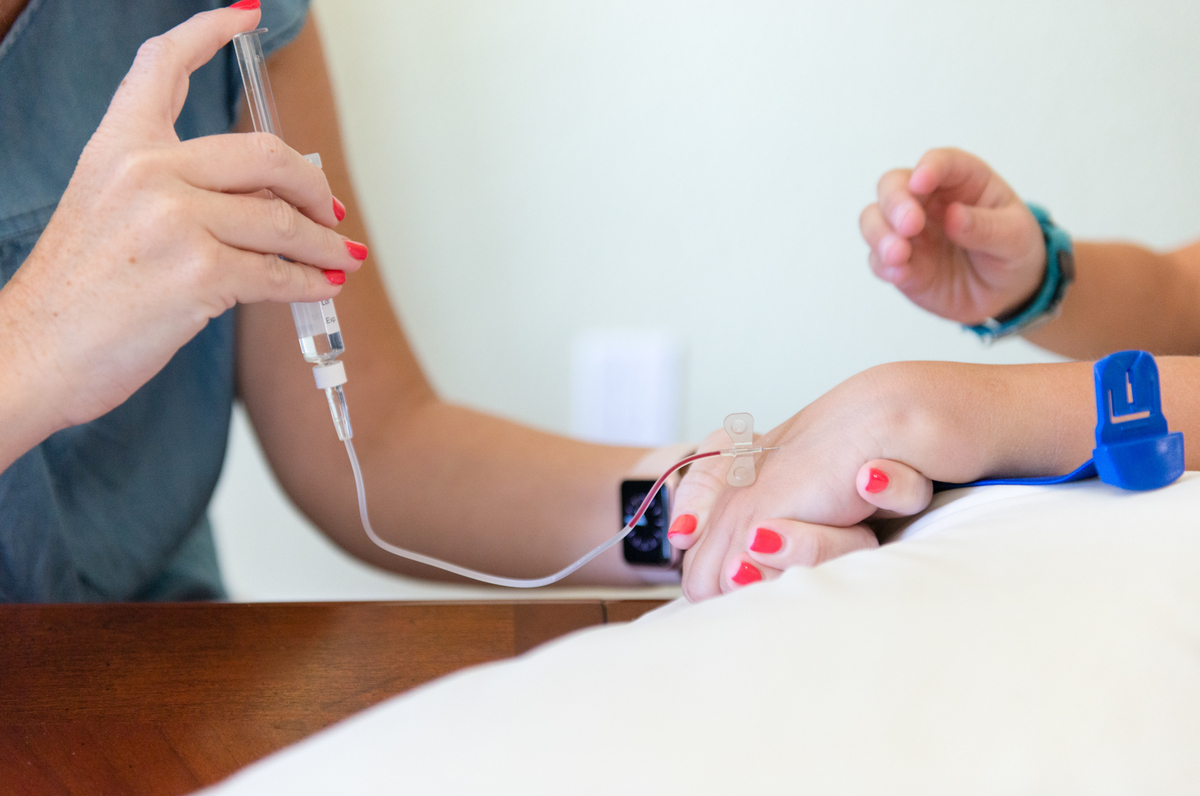 The problem is that companies have no incentive to lower prices. Patients generally don't push back because insurers pay the bulk of the cost. And insurers tend not to object because the market for the drugs — expensive as they are — is small and the patients are especially vulnerable.

For drug companies, Avorn said, "it's a magical formula: Lifesaving drug, child at risk of bleeding to death — it kind of casts anybody who looks at costs into the role of some evil Scrooge-like person."

"The insurers don't want to end up on the front page of the newspaper saying Little Timmy bled to death because his drug wasn't covered," he said.

Also, because prices are high across the hemophilia market, no drug company wants to be the one to blink first. "They don't want to get a price war started and end up at a super low price point," said Edmund Pezalla, a consultant to pharmaceutical companies and former executive at Aetna.

So, these drugmakers compete not on price but clinical benefits — such as how long the drugs' effects last — and through intensive marketing. The pool of potential customers is so valuable that companies often vie directly for individual patients.

Manufacturers, as well as specialty pharmacies that sell the drugs, hire patients and parents as recruiters and advisers, hold dinners and holiday parties, offer scholarships to patients and even run summer camps for children with the disease. The Morris family regularly receives such invitations.

Dr. Jonathan Ducore, a pediatric hematologist-oncologist at the UC Davis Hemophilia Treatment Center in Sacramento, said some of his patients are persuaded by drug company presentations to switch medications. "But the real differences between the drugs are limited," he said.

Ducore tells his patients if he thinks they are being misled by drugmakers about what a product will do. "But even though the tactics may seem a little smarmy, if it's the patient's choice, you have to go with it," said Ducore, who has been Landon's doctor since the boy was born.

The first clotting factor products, which came onto the market in the mid-1960s, were derived from human blood plasma, with thousands of donations combined to create one batch. This proved disastrous in the 1980s, when donors unwittingly spread HIV into the blood supply. An estimated 4,000 people with hemophilia — about 40 percent of the patient population in the U.S. — died from AIDS as a result.

In the 1990s, manufacturers introduced a product that did not carry the disease risk of plasma-based drugs — made by cloning human clotting proteins in animal cells. Companies charged a premium for this ever-more-popular "recombinant factor." 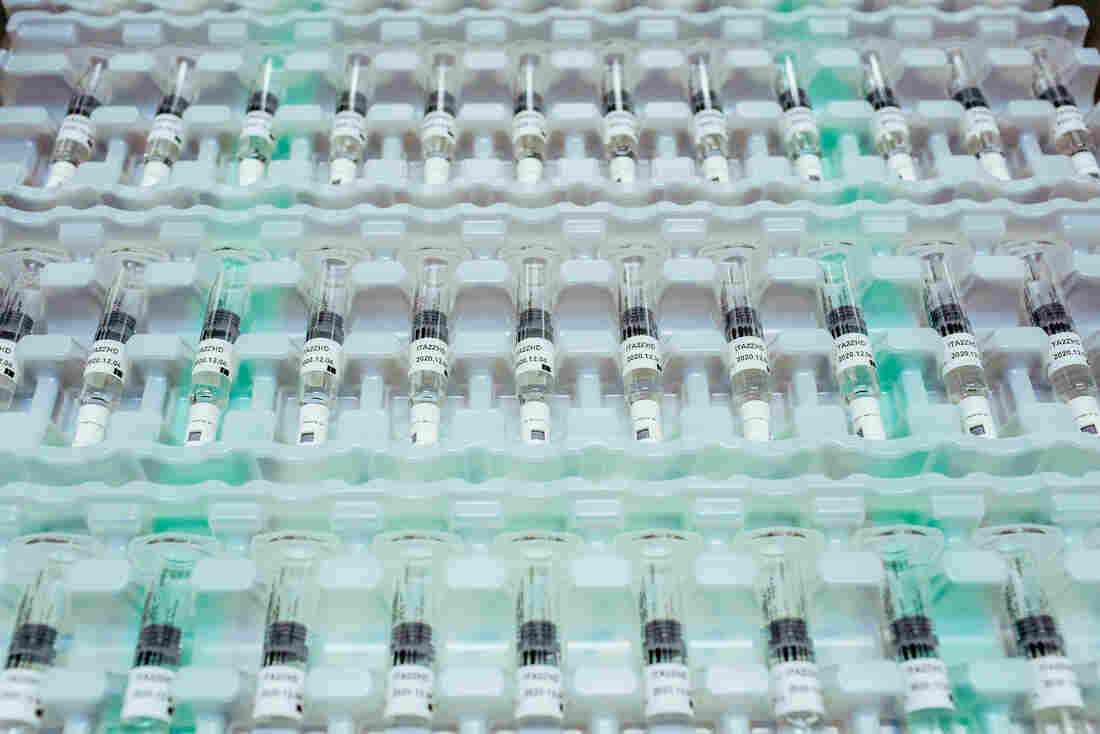 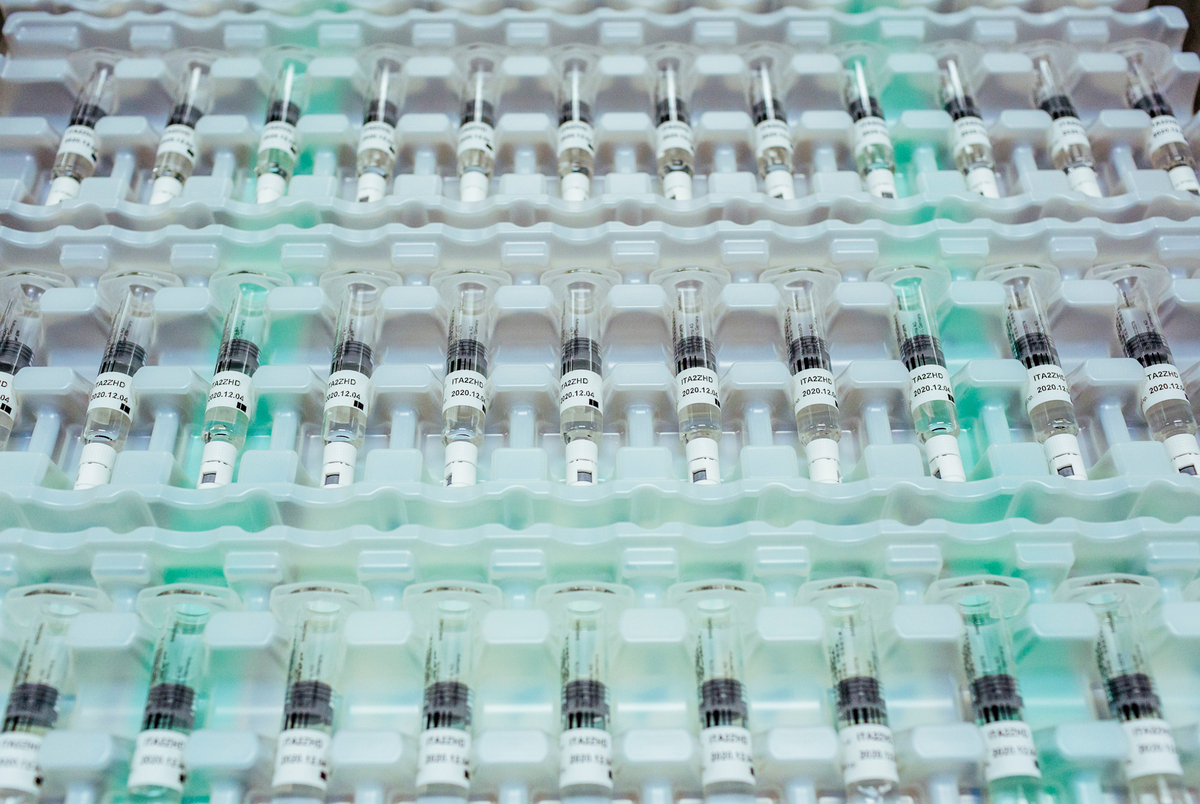 Vials of Bayer's Kogenate, a factor VIII product, at the company's factory in Berkeley, Calif.

Inside a concrete building on the campus, kidney cells from baby hamsters are grown in stainless-steel vessels called bioreactors, and the clotting factor they produce is then purified in steel tanks kept in cold rooms. Working at full capacity, this factory produces less than a pound of clotting factor each year — but when diluted with other ingredients, it's enough to treat thousands of patients in 80 countries.

The investment in manufacturing and marketing is only part of the reason for the high cost of the drugs, said Kevin O'Leary, vice president of pricing and contracting at Bayer. Bayer does not simply add up the costs, slap on a profit margin and come up with the price, O'Leary explained.

Instead, he said, the company begins by talking to insurers, doctors and patients to get a sense of what value its products bring to the market, especially compared to drugs already available. Bayer then sets a price based on both its investment and the product's perceived worth. In the end, he said, "we're charging a price that's competitive with the other factor products on the market."

Pushing Back On Costs

In Europe, hemophilia drugs cost less than half what they cost in the U.S. That's because payers — usually governments — request bids and pick products based on cost and quality.

Without pushback from insurers in the U.S., "the price of any drug in the U.S. is whatever the market will bear as seen by the manufacturer," said Avorn of Harvard.

Recently, a few insurance companies have quietly started to push back on costs. Bayer's O'Leary said several insurers have approached the company and demanded rebates in exchange for offering the drug to their customers. O'Leary would not discuss the details because he said the contracts are confidential.

Michelle Rice, a senior vice president at the National Hemophilia Foundation, said she has been working with several insurers to help them manage costs safely. "We understand the need to control costs, but they can't impede access to the product a patient needs," she said.

It is not yet clear whether such efforts will work, let alone spread.

Sitting at a picnic bench at a park, Jessica Morris pages through Landon's insurance documents. Over the past year, his care cost over $120,000. She wonders sometimes what would happen if they lost their coverage.

"How much would you be willing to pay to have your child lead a normal life?" she said. "I don't think that there's anything we wouldn't pay or sacrifice for him."

It's a problem she prays they'll never have to face.