Accessibility links
Gun Law Proposed In Florida Would Earmark Money For Mental Health Services : Shots - Health News Florida has had three mass shootings in 20 months. Twice before, there have been calls for more mental health funding from the state — to no avail. Will this time be any different? 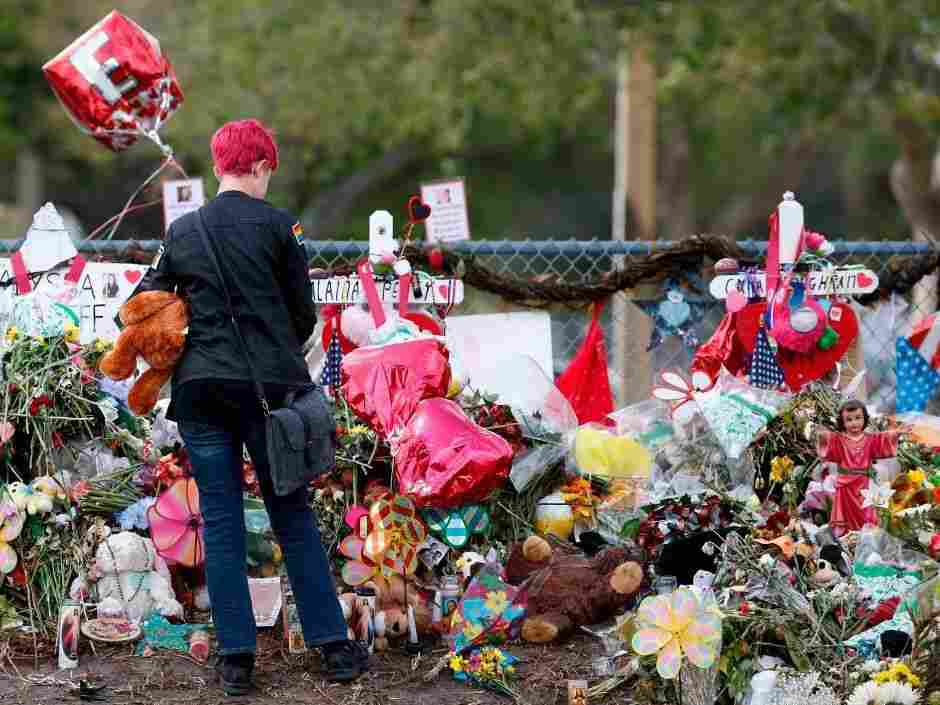 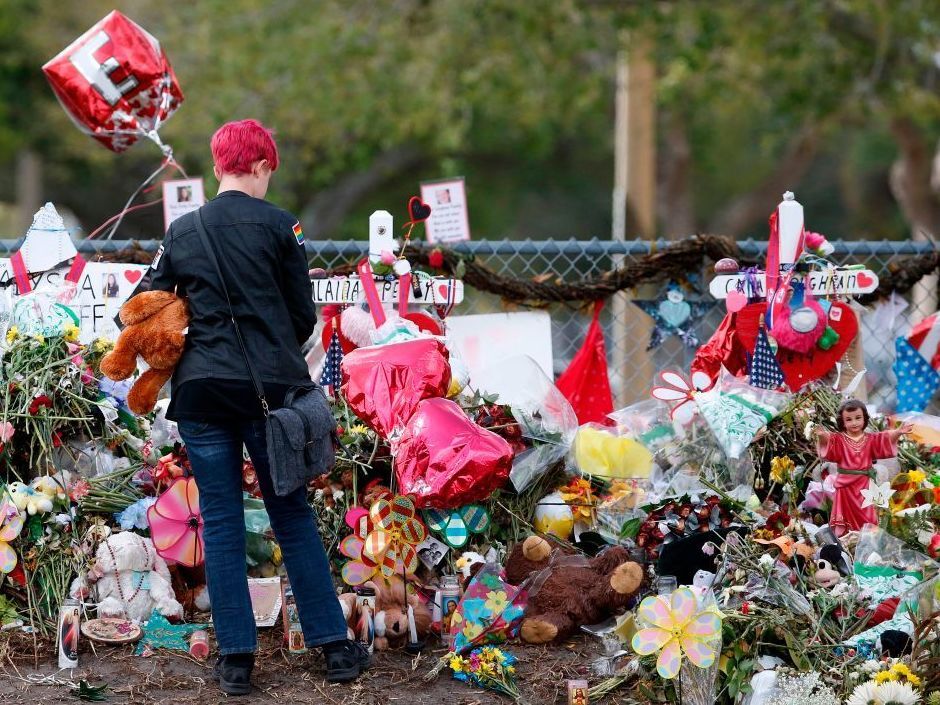 A student stops to look at a memorial at Marjory Stoneman Douglas High School in Parkland, Fla., on Feb. 28. Last month's shooting raised questions about whether states are doing enough to fund mental health services in schools.

A piece of legislation under consideration in Florida this week has received a lot of attention because of a controversial provision that would allow some teachers to have guns in schools. But the proposed law would also designate an influx of cash for mental health services.

The state has seen three mass shootings in 20 months — at the Pulse nightclub in Orlando, the Fort Lauderdale airport and now at Marjory Stoneman Douglas High School in Parkland. And the need for more mental health funding has come up twice before — with no cash forthcoming.

In today's dollars, Florida is spending 40 percent less on mental health than it did in 2000, notes Melanie Brown-Woofter, president of the Florida Council for Community Mental Health.

"That means there are fewer providers or fewer sources that the individuals can access," she says. And that lack of resources, she and other mental health providers say, undercuts the ability to catch mental illness early and treat it.

Since 2000, the state has increased funding for mental health services by $218 million. But that hasn't kept up with inflation and the 4.5 million people who have moved to Florida since then, she says.

The shooting in Parkland shifted the focus of many people in Florida and nationally to mental health. President Trump and other leaders were quick to call the 19-year-old man who killed 17 people at his former high school mentally ill.

Gov. Rick Scott called for $500 million for school safety, including giving young people more counseling and crisis management. He brought it up at a recent stop in Tampa.

The mental health provision is attached to controversial gun legislation passed by the Florida Senate. It raises the age of most firearm purchases to 21, institutes a mandatory three-day waiting period for all firearm purchases and bans the sale of bump stocks, devices that can be attached to a weapon to enable it to fire more quickly.

These provisions are not popular with many in Florida's legislature, where many conservatives have opposed any restrictions on gun ownership in the past. On the Democratic side of the aisle, there is opposition to the provision allowing guns in schools (even Scott opposes that).

But many people on both sides of the gun issue issue favor the proposed legislation's mental health portion, which would provide nearly $90 million more for mental health resources, including $69 million for schools.

Right now, there is roughly one school psychologist for every 2,000 students in Florida. The National Association of School Psychologists suggests there should be four times as many.

Dr. Mark Cavitt is a psychiatrist at All Children's Hospital in St. Petersburg. The renewed interest and funding is a good start, he says, but "it alone is not going to prevent the next episode of mass violence."

Though lawmakers stress that early detection of mental illness is key to keeping another school shooting from happening, Cavitt says there are other contributing factors, such as drug and alcohol use and gun availability. More research is needed, he says, to tease out the true mix of causes.

Brown-Woofter says she does think legislators are directing some money in the right place in this budget: funding to put more counselors in schools and to offer more training to help school employees to identify mental illness.

"We are really pleased to see the attention and the awareness of mental health services now in the budget," she says.

Survivors of the shootings also may need ongoing treatment, she says, and more counselors in schools could help students and parents get through situations like this — including families and schools that weren't directly affected.

Fifteen-year-old Hayes DuJardin worries that the same thing could happen at his school in Lakewood Ranch, south of Tampa.

"Parkland versus my school — they are very similar in the way they are set up," he says, "so everyone was asking, 'How are we preventing this from happening here?' "

In the days after the shooting, officials across Florida chased down dozens of threats. Hayes was so disturbed by one online threat he came across that he brought it to his mom, Michelle DuJardin. It had a picture of a teen holding a gun with the words "Get ready for round two, Florida."

"It's terrifying when an incident like this happens," Hayes' mother says. "You can't help but be angry — scared."

The legislation has been passed by Florida's Senate and is under consideration in the state's House of Representatives. If approved there, it will head to the governor's desk. The legislative session ends Friday.

This story is part of NPR's reporting partnership with Health News Florida and Kaiser Health News.