Accessibility links
Human Brains Unable To Add Neurons After Adolescence : Shots - Health News The brains of birds and mice continue to produce new nerve cells in the hippocampus throughout life. But research now suggests the human brain stops doing this around adolescence. 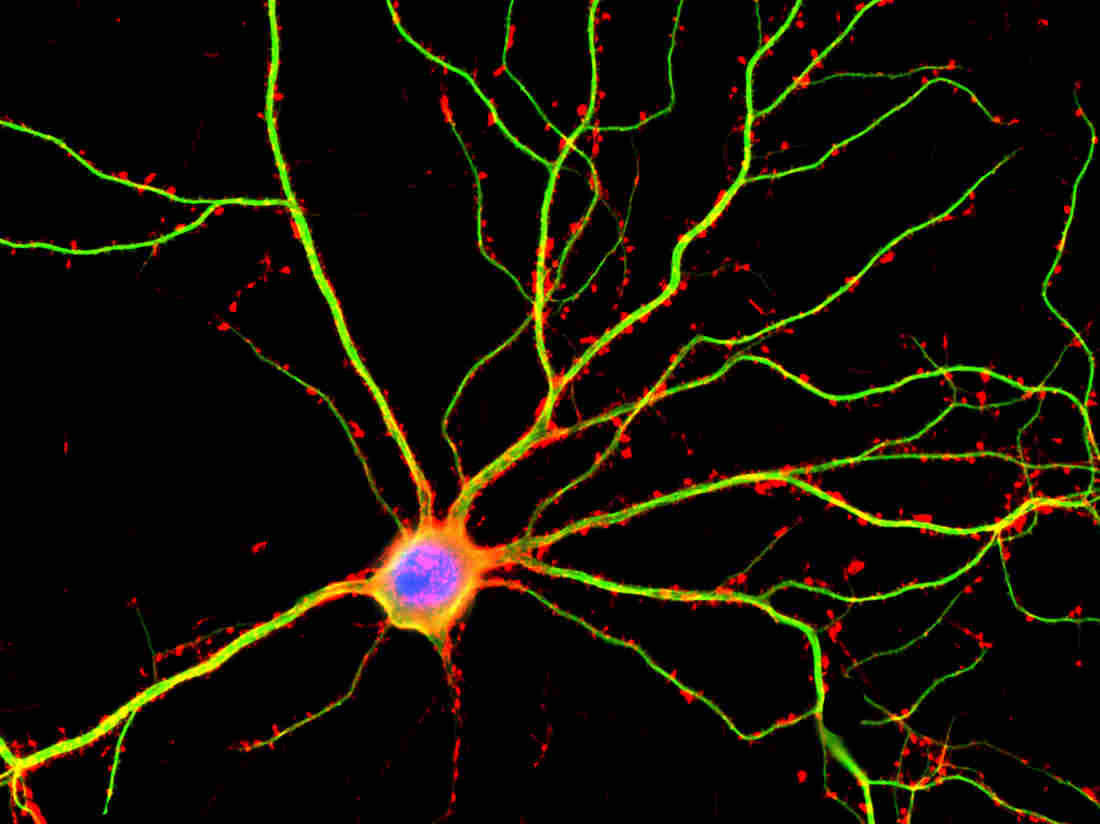 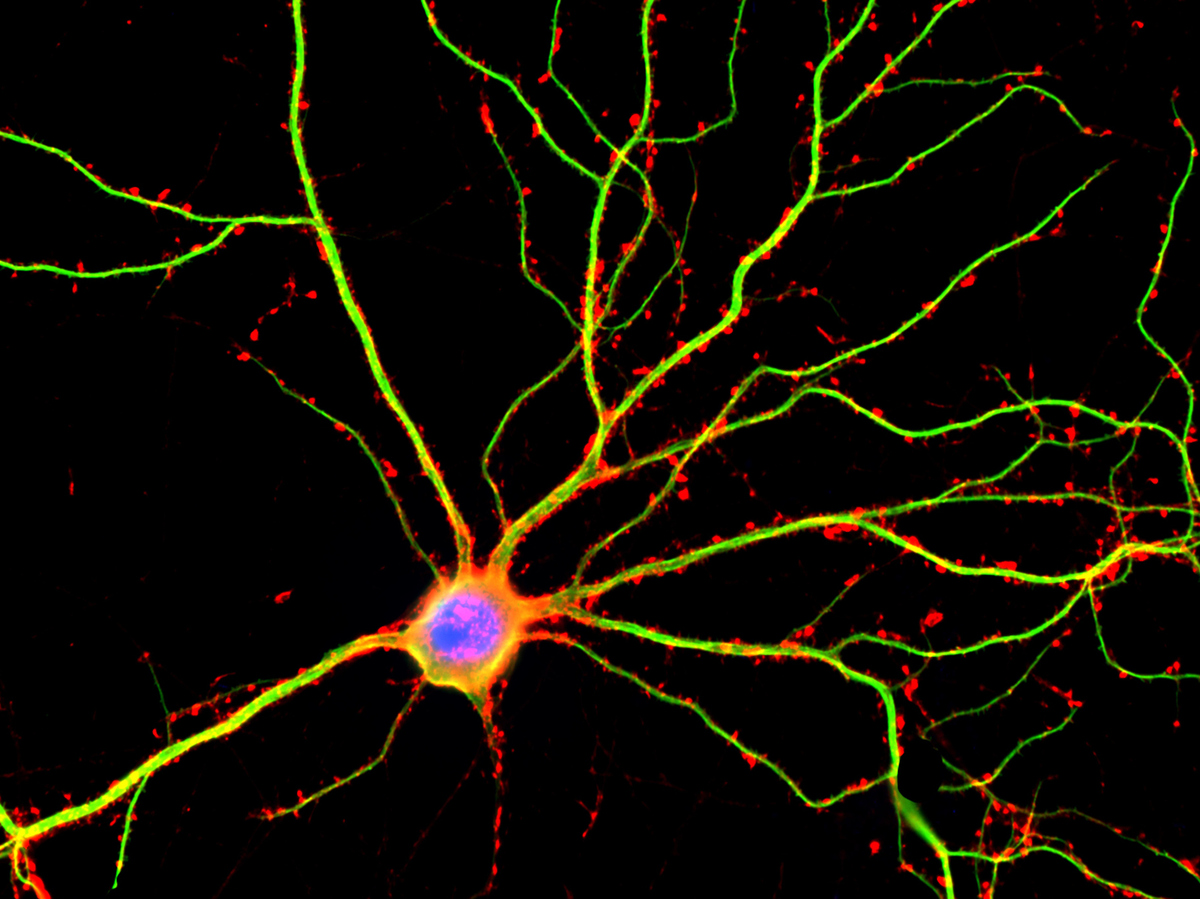 A hippocampal neuron seen in culture. Dendrites are green, dendritic spines are red and DNA is blue.

The study of 59 samples from 29 brains of people of various ages found no immature neurons in anyone older than 13, scientists report online Wednesday in the journal Nature.

"In all of the adult samples we looked at, we couldn't find any evidence of a young neuron," says Shawn Sorrells, the study's lead author and a senior researcher in the lab of Arturo Alvarez-Buylla at the University of California, San Francisco.

The finding challenges decades of research suggesting that new neurons continue to appear in the hippocampus, an area of the brain involved in memory and emotion. It also calls into question claims that both exercise and some anti-depressant drugs could boost the production of new neurons in the hippocampus.

The finding is bound to be controversial. "I'm sure that there are going to be people who challenge [our results]" says Alvarez-Buylla, a professor of neurological surgery at UCSF.

One of those who questions the new study's conclusion is Rusty Gage, interim director of the Salk Institute in La Jolla, Calif., and one of the scientists whose research in the 1990s helped establish the idea that new cells do appear in the hippocampus of adult humans.

"I feel confident in my lab's results," Gage says in a written statement. And results from many labs, he says,"repeatedly confirm that neurogenesis can occur in the adult brain."

The new study relied on measures of neurogenesis that aren't always reliable when used on brain tissue taken from someone who has died, Gage says. (The study used also tissue from patients undergoing brain surgery.)

But knocking down the latest findings won't be easy, says Jason Snyder, an assistant professor at the University of British Columbia who wrote a commentary accompanying the study.

The research is "as convincing as you can be," Snyder says. "This is certainly one of the best or perhaps the best of study of neurogenesis in humans."

Even so, he says it is unlikely to settle the issue.

One reason is that it is very difficult to study the birth of new neurons, a process called neurogenesis, in people. High-quality samples of brain tissue are in short supply. And each sample tells you only what's happening at a single point in time at one place in the brain.

Also, several previous studies have found indirect evidence that neurogenesis does occur in the adult hippocampus.

Alvarez-Buylla himself thought he might find new brain cells in people when his lab began investigating the question.

He had trained in the Rockefeller University lab of Fernando Nottebohm, who discovered new cells forming in adult canaries.

And Alvarez-Buylla knew that many studies had found strong evidence of neurogenesis in adult mice.

So when his lab began studying human brains, "we were expecting to find evidence of young neurons" in the hippocampus, he says. But that's not what happened.

The first hint came several years ago when Alvarez-Buylla visited a colleague's lab in China.

"We were looking through some brains that he had collected from humans," he says, "and when we looked at the hippocampus we couldn't find the young neurons there."

So Alvarez-Buylla assembled an international team and launched the new study of 59 brains. The team used both classic techniques and the latest technology to search each sample for immature brain cells.

And they found lots of these cells in babies and young children. "But then by 7 years of age, these cells were much more sparse," Sorrells says. And the numbers dwindled even further in older brains.

If the results hold up, scientists will have to figure out how the adult human brain can continue to change throughout life without adding new cells, the way a rodent brain does.

One clue is that it can take many years for a new human brain cell to mature, Snyder says. So even a grown-up's brain may contain many cells whose functions aren't yet fully defined.

"Cells that were born in childhood could play a big role in learning, in memory and in emotional disorders," Snyder says. "So their impact on adult brain life could still be big."

It also may be possible to use drugs or other therapies to get an old brain to start making new cells, Snyder says. That might help repair the damage caused by a brain injury or Alzheimer's disease, he says.

"I think the possibility is real that someday we'll be able to rejuvenate the aging brain," Snyder says.

In the audio and an earlier Web version of this report, it was said that 59 brains were studied. In fact, 59 samples from 29 brains were used.