Accessibility links
For One Father And Son In Puerto Rico, A Storm Was Just The Latest Trial : Shots - Health News The Martinez family has been waiting more than a year for a neurologist to diagnose the son's condition. He needs a diagnosis to be eligible for the health care he needs, but can't get an appointment. 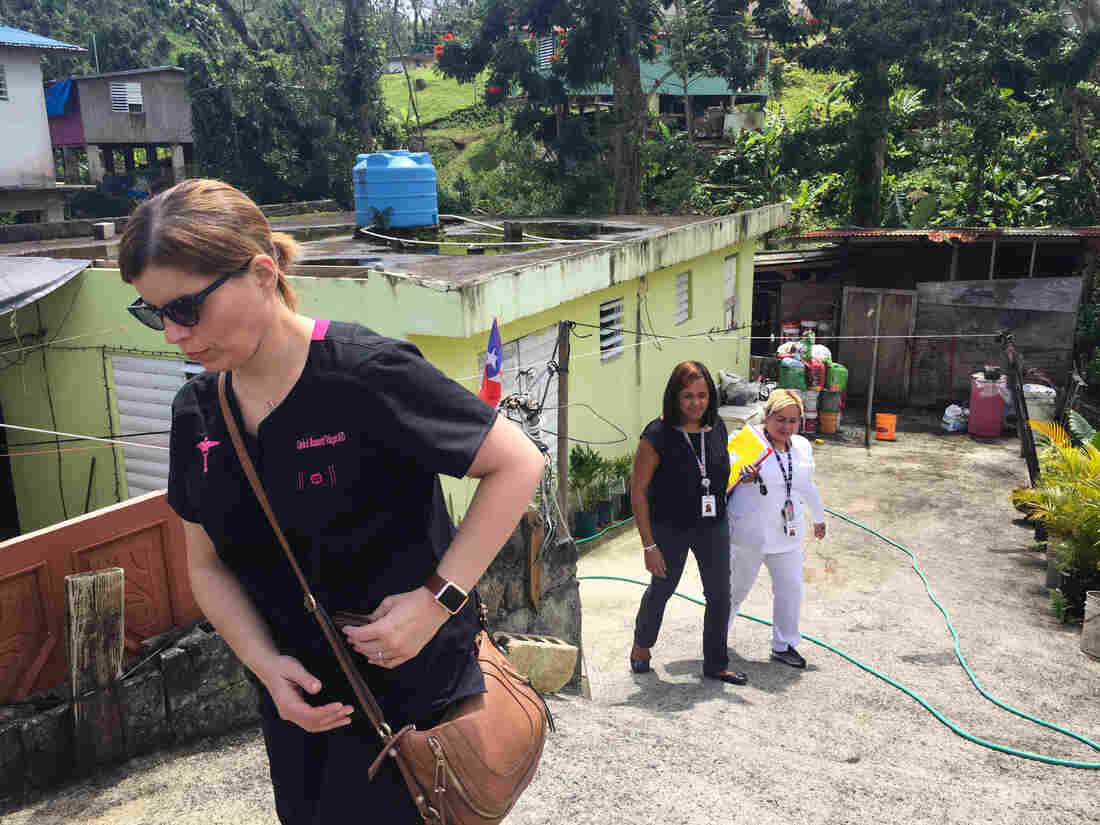 Dr. Carla Rossotti (left), a general practitioner, and her health care team leave the home of the their patient, 37-year-old Osvaldo Daniel Martinez. He has the symptoms of a degenerative disease, Rossotti says, but he needs a neurologist's evaluation before he can get proper treatment. Sarah Varney/Kaiser Health News hide caption 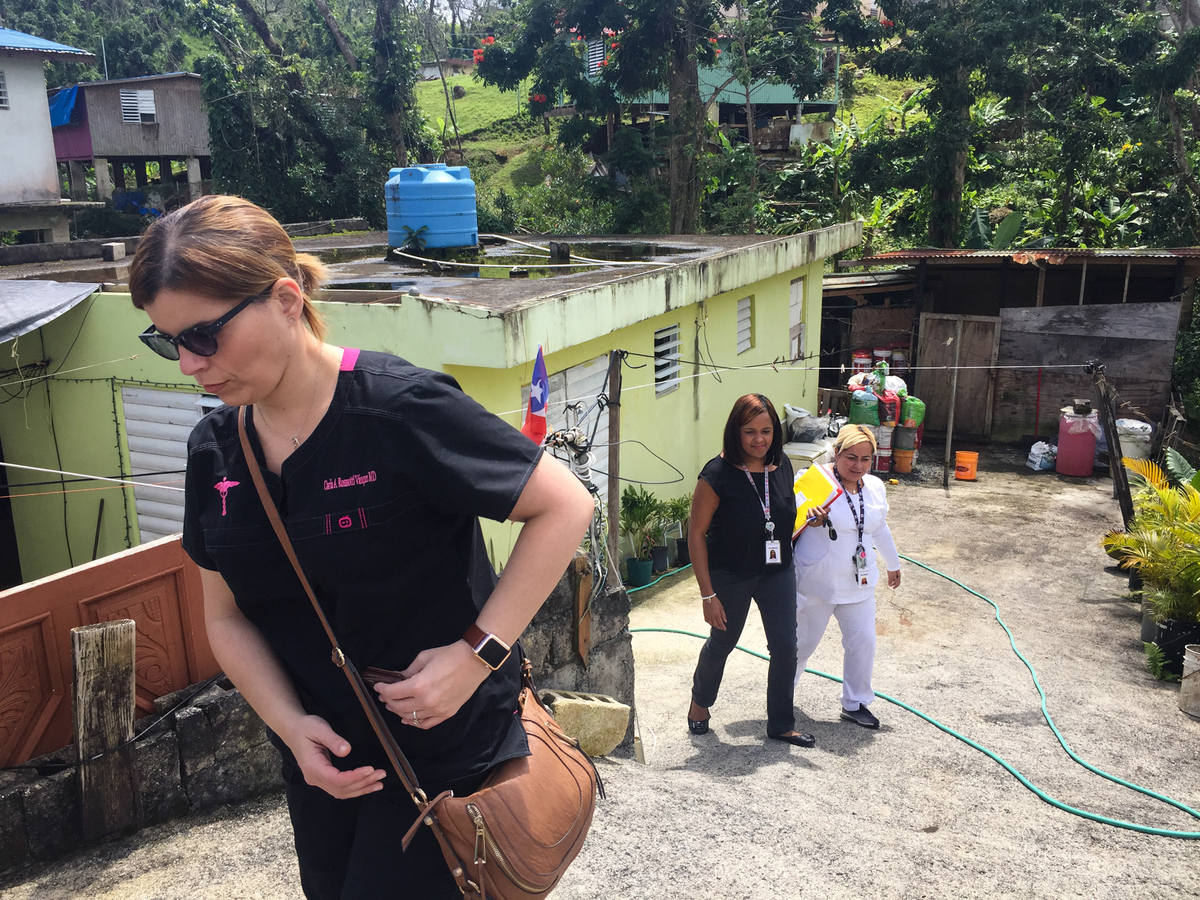 Dr. Carla Rossotti (left), a general practitioner, and her health care team leave the home of the their patient, 37-year-old Osvaldo Daniel Martinez. He has the symptoms of a degenerative disease, Rossotti says, but he needs a neurologist's evaluation before he can get proper treatment.

To reach the Martinez home in Puerto Rico's central mountains, social worker Eileen Calderon steers around piles of dirt, treacherous potholes and power company trucks that block the road. Finally, we pull up to a sagging cement home, the roof done in by Hurricane Maria. Laundry hangs under a tarp, and a cat is tied to a leash outside the door.

Calderon, who is based in San Juan, and works for VarMed, a company that handles complex medical cases in Puerto Rico, has brought two colleagues — a nurse, Anamelia Velazquez and a primary care physician, Dr. Carla Rossotti — to check in on Osvaldo Martinez and his son, Osvaldo Daniel Martinez. Osvaldo Martinez (left) takes care of his increasingly disabled son, Osvaldo Daniel Martinez, who is on Medicaid. With few neurologists on the island, they have not been able to get the younger Martinez an appointment with a specialist who could formally diagnose and treat him. Sarah Varney/Kaiser Health News hide caption 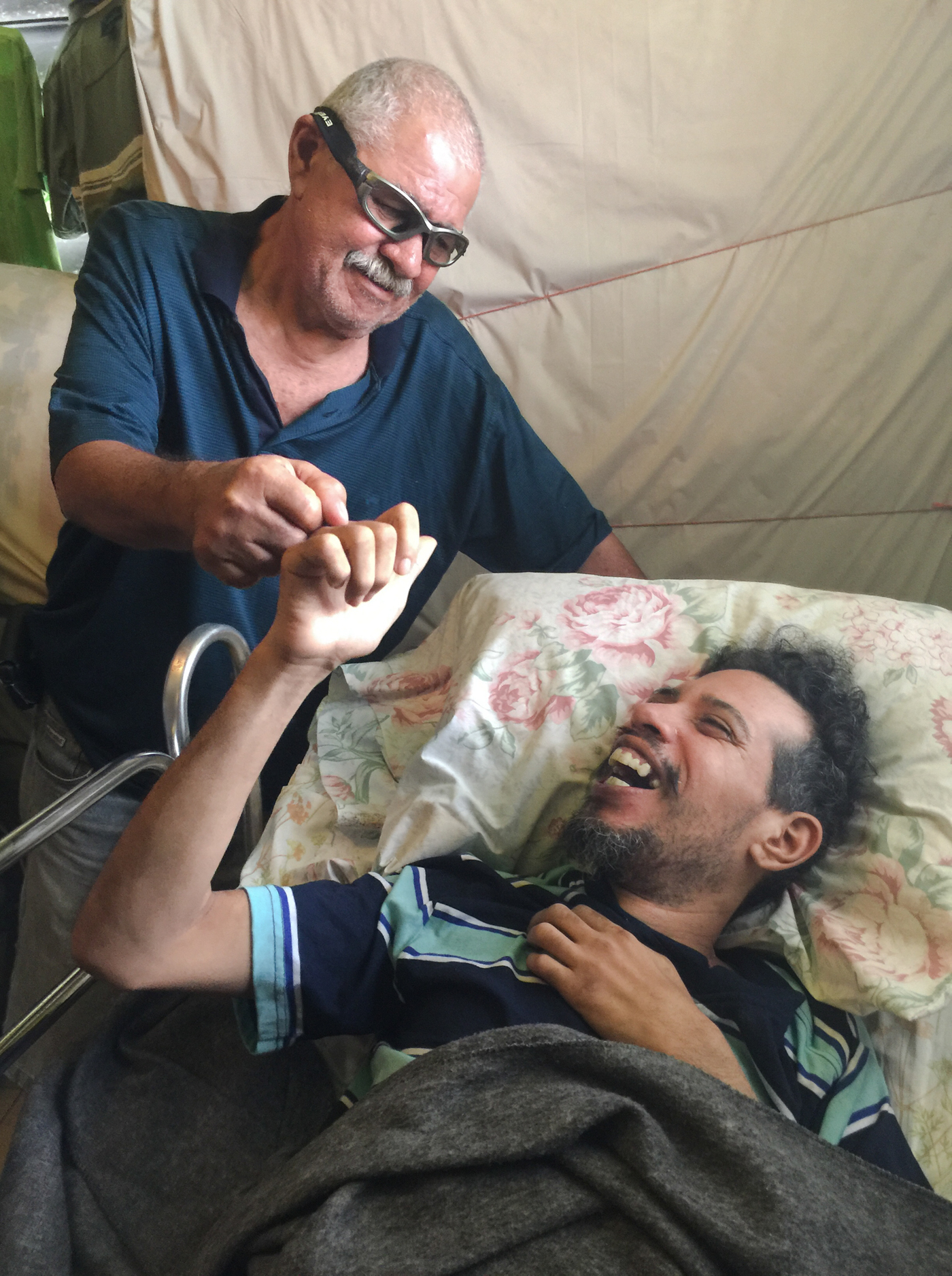 Osvaldo Martinez (left) takes care of his increasingly disabled son, Osvaldo Daniel Martinez, who is on Medicaid. With few neurologists on the island, they have not been able to get the younger Martinez an appointment with a specialist who could formally diagnose and treat him.

Inside a darkened bedroom, the elder Martinez, a 67-year-old former star pitcher in the local baseball league, spoons rice and sausage into his son's mouth. The younger Martinez lies in a hospital bed, his arms and fingers spasm and his eyes loll around in his head. He's 37 years old, born in Chicago, a former security guard.

Some three years ago, after he and his father moved back to Puerto Rico from Illinois, the younger Martinez started showing early signs of multiple sclerosis. Over the last year, his world became this room, then this bed.

His father points to the ceiling — leaking from the morning's rain and covered in mold.

"All of this leaking that you can see came out because of the hurricane," he says.

The power came back on in his house about a month ago, and the family has running water, so he is able to keep his son clean. The father carries a plastic basin into the bathroom and draws the water. Then, as he does a few times each day, he returns to the bedroom to bathe his adult son and gently change his diaper.

But Rossotti, whose company VarMed, has been paid by the Puerto Rican government help take care of Martinez Junior, says the young man can't yet get an appointment to see a neurologist to confirm his multiple sclerosis and start treatment. There is a chronic shortage of neurologists on the island, and those who remained after the storm have few slots in their schedules for Medicaid patients.

"We have a patient who was stable a year ago and now he's bedridden," Rossotti says. "He hasn't been able to get that neurologist evaluation."

Calderon, the social worker, says she has been trying for a year to get an appointment for Martinez, but receptionist after receptionist tells her the neurologists they work for are taking no new patients.

People here in Puerto Rico talk about life "before Maria" and life after. But for many of the island's most vulnerable residents, the 2017 storm exacerbated problems that existed long before.

The island's financial crisis has sent doctors fleeing to the States over the last decade; Hurricane Maria added further fuel to that exodus. There is no exact accounting yet of just how many physicians have left the island, but from 2006 to 2016, the number of doctors dropped from 14,000 to 9,000, according to the College of Physicians and Surgeons of Puerto Rico.

Nearly half of Puerto Ricans on the island rely on Medicaid — compared to around 20 percent of the population in the continental U.S. The territory's government has long struggled to cover the costs of health care, partly because Congress caps the amount of money for Medicaid it sends to the island from the federal treasury.

Puerto Rico essentially receives a block grant for Medicaid — a certain amount of money for each citizen in the program, no matter how great the needs for care are. The island government recently announced that it will overhaul how Medicaid contracts are awarded.

Currently, Molina Healthcare, a California-based company that provides health insurance coverage to low-income people on Medicaid in Puerto Rico and elsewhere in the U.S., is ostensibly responsible for guaranteeing access to needed doctors.

A spokesperson for Molina, Laura Murray, says the company cannot comment on the Martinez case, or that of any individual patient, because of privacy laws.

But in a written statement, the company representative reports that it contracts with 41 neurologists in Puerto Rico's east and southwestern regions, and meets "the network adequacy requirements in our contract."

"However," the statement continues, "we recognize that there is an island-wide shortage of physicians — particularly specialists — and we are proposing suggestions to [the Puerto Rico government] on how we could work together to remediate this."

For now, the younger Martinez languishes — each day and night no different than the next, as the disease lays siege to his central nervous system, disrupting the vital connections between brain and body.

Without a confirmed diagnosis, he can't get certain public disability benefits. And he isn't getting medication for his condition or his pain; the agency Rossotti works for can only advocate for patients, not treat them.

The outward perseverance of father and son belies the true terror of their confinement. As Martinez Senior describes his son's decline, tears come to his eyes; his son, who can understand everything, rolls on his side and begins to weep.

"I have to do all that needs to be done for him," Martinez Senior says. But he is 67 years old, and not in good health himself. He has severe arthritis and a painful bulge in his abdomen. During the months they went without power, he says, the hospital bed didn't go up and down. He shows me a photo of his arm — black and blue and swollen — from pressing against the metal bars of the bed as he leaned down to tend to his son.

But it's his son's withering away that pains him most.

"If something would happen to me," the father says, clasping his hands together in prayer — "I don't know."