Accessibility links
Opioid Treatment Program Helps Parents Get And Stay Sober To Get Their Kids Back : Shots - Health News A mentoring program in Kentucky expedites treatment for some parents who lose custody of their children. The goal is to help parents get and stay sober, and reunite them with their kids within a year. 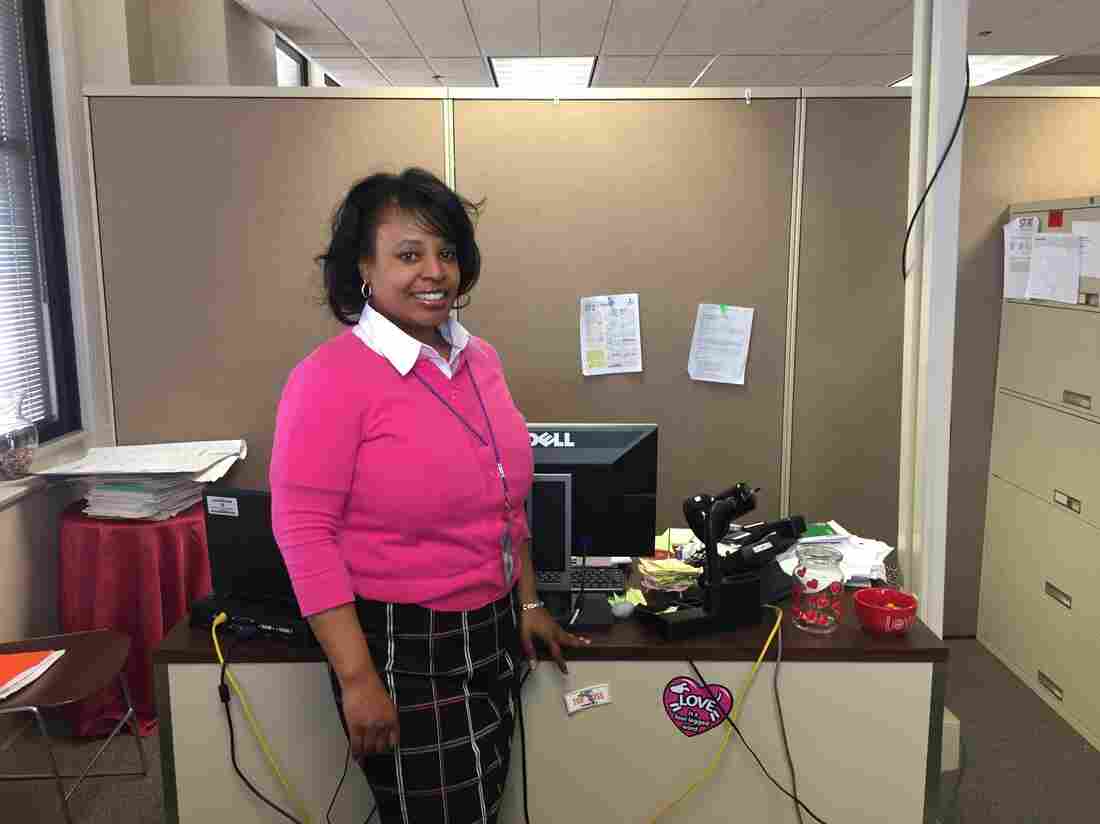 Velva Poole works to reunite children with parents who have been grappling with substance use disorder. Mentoring the parents, she says, is a big part of the state-sponsored program's success. Lisa Gillespie/Louisville Public Media hide caption 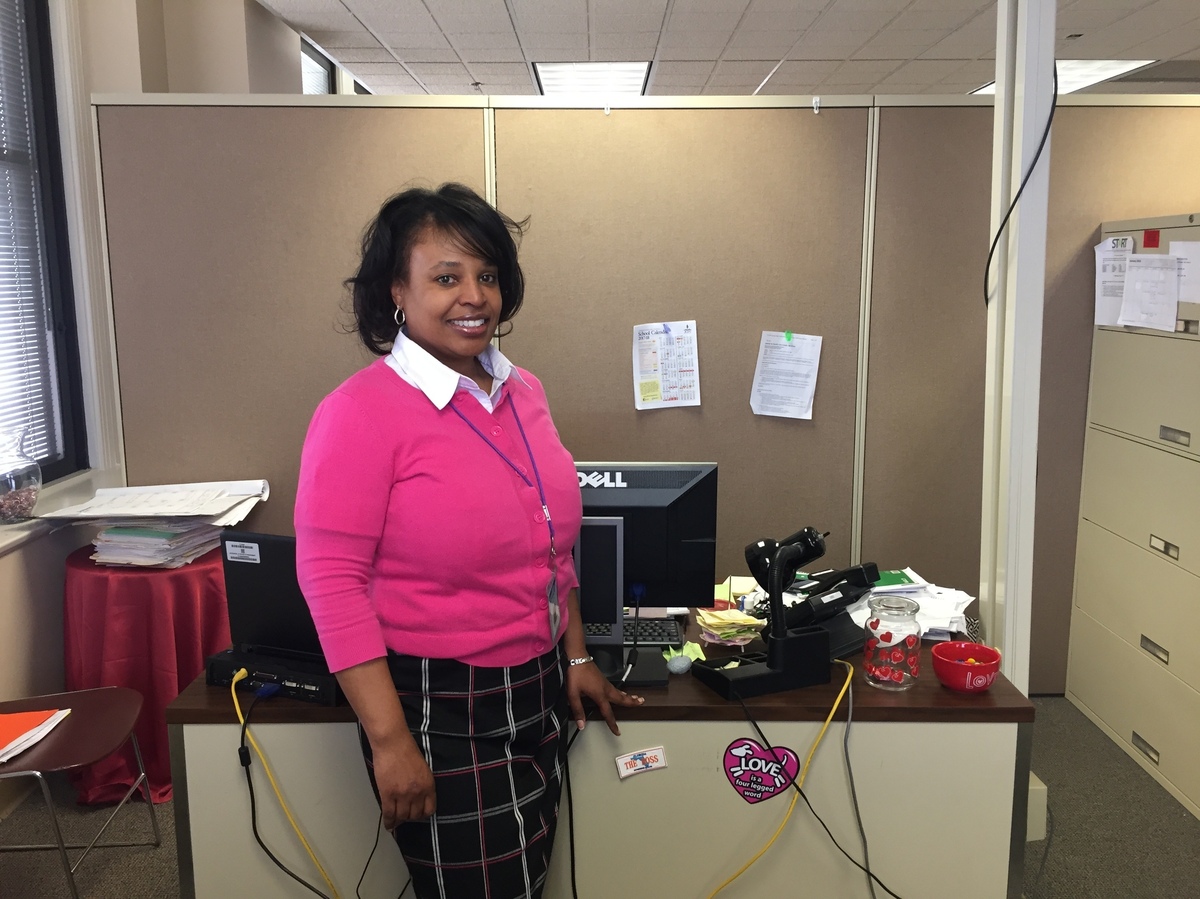 Velva Poole works to reunite children with parents who have been grappling with substance use disorder. Mentoring the parents, she says, is a big part of the state-sponsored program's success.

Velva Poole has spent about 20 years as a social worker, mostly in Louisville, Ky. She's seen people ravaged by methamphetamines and cocaine; now it's mostly opioids. Most of her clients are parents who have lost custody of their children because of drug use. Poole remembers one mom in particular.

"She had her kids removed the first time for cocaine. And then she had actually gotten them back," she says. But three months later, the mother relapsed and overdosed on heroin.

"She had to go through the whole thing all over again — having supervised visits with the kids, then having overnights," Poole recalls. Starting again from the bottom, the mom took steps to reclaim her life.

And, eventually, she did regain custody of her children. Poole recently ran into the woman at the grocery store.

"She hugged me," Poole says. "I don't know how to describe it. It just makes you feel like, wow, what you did really did make a difference in someone's life."

Poole is now a supervisor in the Sobriety Treatment and Recovery Teams program, which is funded primarily by the state. It's an intensive program for parents who have had their kids taken away because of substance abuse and the resulting neglect or mistreatment of the children. The goal is to create a faster process to reunite those families.

It works like this in Kentucky: Someone reports a parent to Child Protective Services if they suspect the adult has an addiction problem and children aren't being taken care of. If there's evidence to support the claim, the parent then has a choice — they can go through the standard CPS process, or enroll in START.

Both options have the parent meet with a social worker, and include weekly drug screenings and daily drug treatment, as well as regular attendance at meetings of Alcoholics Anonymous or Narcotics Anonymous. But START also assigns a mentor to families; the parent has to meet with the mentor once a week. The mentor also drives the parent to and from some appointments and helps them get other services they may need.

Rhonda Maddox is one the family mentors.

"I'm able to open that door, and say, 'I've been where you are. We might not walk down the same road but I done some of the same things you have,' " Maddox says.

She stopped using drugs 14 years ago.

"I began using drugs at the age of 9," Maddox recalls. "My mom was gone [and] my dad was gone, due to their addictions. So I started using. It stayed like that for a long time, going on into high school. I had a few kids then, and then I abandoned those two kids on my granny."

Maddox eventually got sober and regained custody of her children. Hearing her story makes it easier for clients to open up and and accept help, Poole says.

"It's very helpful for the client to be able to relate to someone that's been in their shoes," she says.

The START program began in Ohio and expanded into Kentucky in 2007. Since then, research has shown it has a higher success rate in reuniting families than the traditional child welfare process.

But the opioid crisis has posed new challenges, Maddox says.

"I had a few of my clients that passed away [after] an overdose — was kind of devastating," she says. "Sometimes I wonder if there was something else I could have done."

In each case, Maddox and Poole have a year to try to reunite START parents with their children.

Former START director Tina Willauer says, despite the benefits of enrolling in the START program, parents are still up against significant societal stigma because of their drug use.

"There's this question, 'should we even give them treatment?' — almost as if they're throwaway because they have an opioid use disorder," Willauer says.

She believes there are important reasons to keep families together.

Willauer and the staff at START wish every parent could go through their demanding program. But START costs more money than the standard, less-intensive process of child protective services. With the state of Kentucky facing a budget crunch, expansion of START is not likely to happen anytime soon.

This story is part of NPR's reporting partnership with Louisville Public Media and Kaiser Health News.