Accessibility links
Fentanyl-Laced Cocaine Becoming A Deadly Problem Among Drug Users : Shots - Health News The powerful opioid fentanyl is showing up in batches of cocaine, threatening a new wave of opioid overdoses. Some doctors, drug users and law enforcement wonder if the contamination is deliberate. 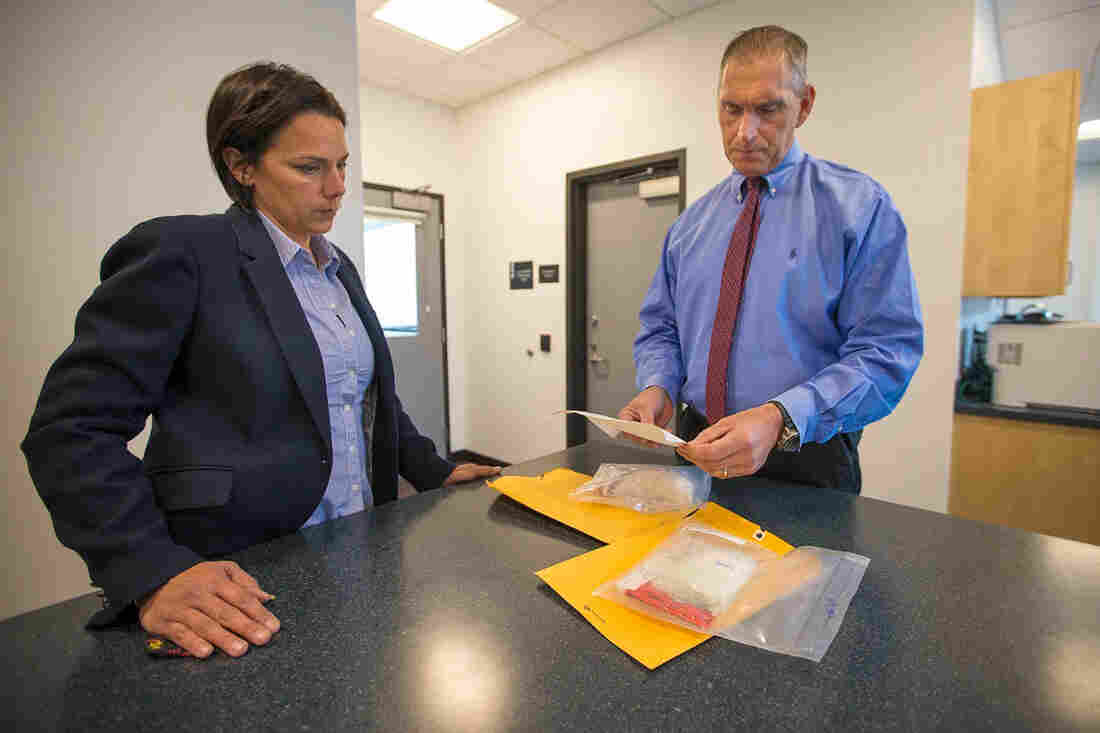 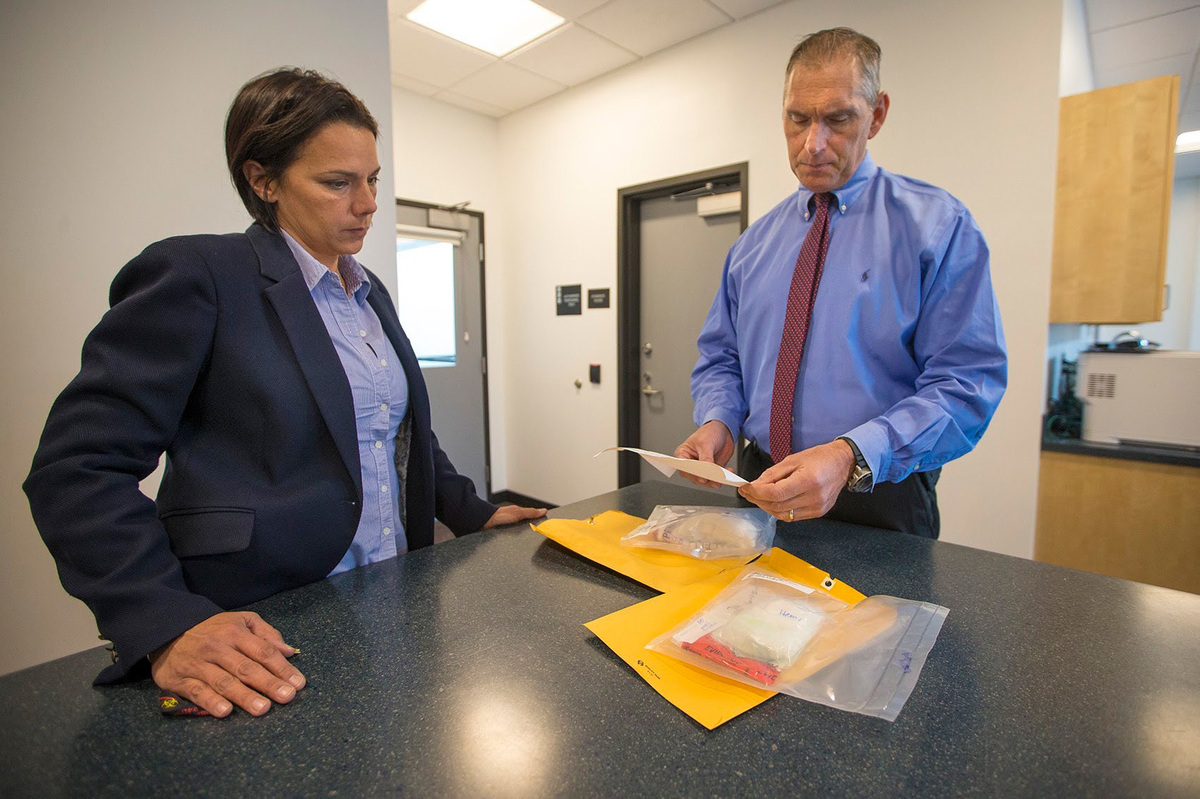 A pipe was the only sign of drug use found near Chris Bennett's body in November. But it looked like the 32-year-old Taunton, Mass., native had stopped breathing and died of an opioid overdose. Bennett's mother, Liisa, couldn't understand what happened. Then she saw the toxicology report.

"I'm convinced he was smoking cocaine that was laced," she says. "That's what he had in his system, [it] was cocaine and fentanyl."

Liisa Bennett was shocked. Chris had developed an addiction to pain pills and then heroin in his late teens but had not used opioids for at least 10 years, as far as she knew. Bennett had warned her son that if he ever used opioids again, he'd be in greater danger of an overdose because fentanyl, an opioid drug more powerful than heroin, was mixed into much of the supply.

"My focus was making sure that he wasn't going to do the heroin that was laced," Bennett says. She never suspected the crack cocaine Chris smoked occasionally would kill him. "Absolutely not."

The Centers for Disease Control and Prevention says fentanyl, which is up to 50 times more powerful than heroin, was found in more than half of overdose deaths last year in 10 states including Massachusetts. Now, there's concern as it creeps into cocaine.

Bennett's story echoes those heard on college campuses, where students are snorting cocaine to stay awake or during a campus party, and unknowingly overdosing on fentanyl. Thirty-, 40- and 50-year-olds are celebrating their big birthday with a line of cocaine and keeling over. And regular cocaine users report feeling the expected rush and then falling asleep. If these men and women use cocaine and do not have the opioid reversal drug naloxone handy, sometimes, they don't wake up.

It's not clear how many of the nearly 2,000 estimated deaths listed as opioid overdoses last year in Massachusetts represent people who thought they were doing cocaine. The state doesn't register drug combinations found in most bodies after an overdose.

Connecticut does. There, the number of deaths involving cocaine and fentanyl together has increased 420 percent in the past three years. Heroin laced with fentanyl claimed even more lives in Connecticut during that same period.

In Massachusetts, an increasing amount of cocaine laced with fentanyl is changing hands on the streets. State police recorded 199 such samples last year, a nearly threefold increase from 2016 — but still a small percentage of total cocaine seizures.

The Drug Enforcement Administration says 7 percent of cocaine seized in New England in 2017 included fentanyl, up from 4 percent in 2016. A similar comparison for the U.S. as a whole was not readily available.

Who's adding fentanyl to cocaine, and why?

The DEA's latest National Drug Threat Assessment says adding fentanyl to cocaine is typically for the purpose of "speedballing," which combines the rush of a stimulant, often cocaine, with a drug that depresses the nervous system, such as heroin. It's a dangerous combination in any form — more so with fentanyl.

But there's speculation that something else is happening in the current surge of cocaine/fentanyl overdoses and deaths.

A dozen EMTs, police officers, physicians and outreach workers contacted for this story describe men and women who were revived after an opioid overdose and claimed they had only used cocaine. So when was fentanyl added and why? There are a few theories.

Some researchers say fentanyl showing up in cocaine looks to be accidental, a product of messy packaging rather than malicious intent. Boston Medical Center epidemiologist Traci Green says the rise in cocaine/fentanyl deaths she's tracking out of Rhode Island is commensurate with the increase in fentanyl deaths overall.

"It's more of a contamination model rather than one that is malicious or purposeful," says Green, who is also an associate professor of emergency medicine and epidemiology at the Brown University School of Medicine.

But a growing number of law enforcement agents, doctors, recovery providers, and drug users argue for malicious intent. They speculate that cartel leaders are using cocaine to expand the market of people addicted to opioids.

"People who were just using cocaine occasionally, now they're using cocaine every day," says Rafael, who buys cocaine and other illegal drugs, often several times a day, on the streets of Boston. (We've agreed to use just his first name.)

Rafael says dealers, high up, are intentionally adding fentanyl to cocaine because fentanyl is a more addictive drug.

"It's all about making them [drug users] need the product," Rafael says.

There's at least one flaw in that market expansion theory, says Albie Park, who co-founded a drug use harm reduction program out of Northampton, Mass., called HRH413.

"If you're opioid naive [with no tolerance for opioids] and you take fentanyl, there's a good chance you'll die," Park says. "So adding fentanyl to cocaine may just scare people away. "

Still, Park says the amount of fentanyl in cocaine he's hearing about suggests intent. He can't understand why.

A call for warnings

Across Massachusetts, there have been scattered alerts about overdoses that appear to be caused by fentanyl in cocaine.

In Arlington, a suburb of Boston, Police Chief Fred Ryan says he has seen four since December.

"Law enforcement tells us that that's the next wave of the addiction crisis — is fentanyl-laced cocaine," Ryan says.

There have been a few public warnings, in Rhode Island, New York City and Tennessee.

"Here's why we're so concerned," said Tennessee Bureau of Investigation Assistant Director T.J. Jordan during a news conference last October. "To be blunt, what you might buy and use, thinking it's a good time, could cost you your life."

Some in the overdose prevention community say it's time to raise broader alarms. Jess Tilley, who also co-founded HRH413, offers naloxone and other harm reduction training to agencies that serve drug users and sex workers in western Massachusetts.

"We don't want to cause widespread panic, but with how deadly fentanyl is, we really need to get the word out there that it could potentially be in every batch of cocaine, just like we tell everyone to approach heroin like it could potentially have fentanyl," Tilley says.

That means teaching cocaine users to test the drug before they use it, then start with a small dose, to use in pairs, and carry naloxone — things that are becoming more common for heroin users.

"The tools that are going to be most effective are the ones we already have," says Green at Boston Medical Center. "There's hope. We have quite a lot that we can work with here."

But Green is concerned. If a growing number of regular and recreational cocaine users will be ingesting fentanyl, there are a lot of questions researchers need to ask and answer fast about how cocaine and fentanyl interact in the body, whether this shift will lead to more intravenous drug use, and which fentanyl analogs are in the cocaine mixtures.

"At the drug trafficking level, there's shifting happening in the markets," Green says. "We may want to think about the whole market transitioning in front of our very eyes."

A specific warning for African-Americans

If fentanyl becomes more prevalent in cocaine, there are signs that African-Americans will be hit harder than other groups.

"That really reinforces the fact that we have to worry about cocaine use among African-Americans," says study co-author David Thomas, a program officer at the National Institute on Drug Abuse.

Thomas and his colleagues could not tell whether fentanyl played a role in the rise of these cocaine overdoses. But Dr. Tom Gilson says he can. Gilson is the medical examiner in Cuyahoga County, Ohio, which includes Cleveland.

"Over the space of three years we have almost a 14-fold increase in fentanyl deaths among African-Americans," says Gilson, most of which he says were "mixtures of fentanyl with cocaine."

The growing presence of fentanyl in cocaine may be merging two drug communities and decades of tragedy.

"The opioid epidemic started in white suburbia but with the infiltration of fentanyl into the cocaine market we are definitely now seeing many more African-Americans dying of this problem," Gilson says.