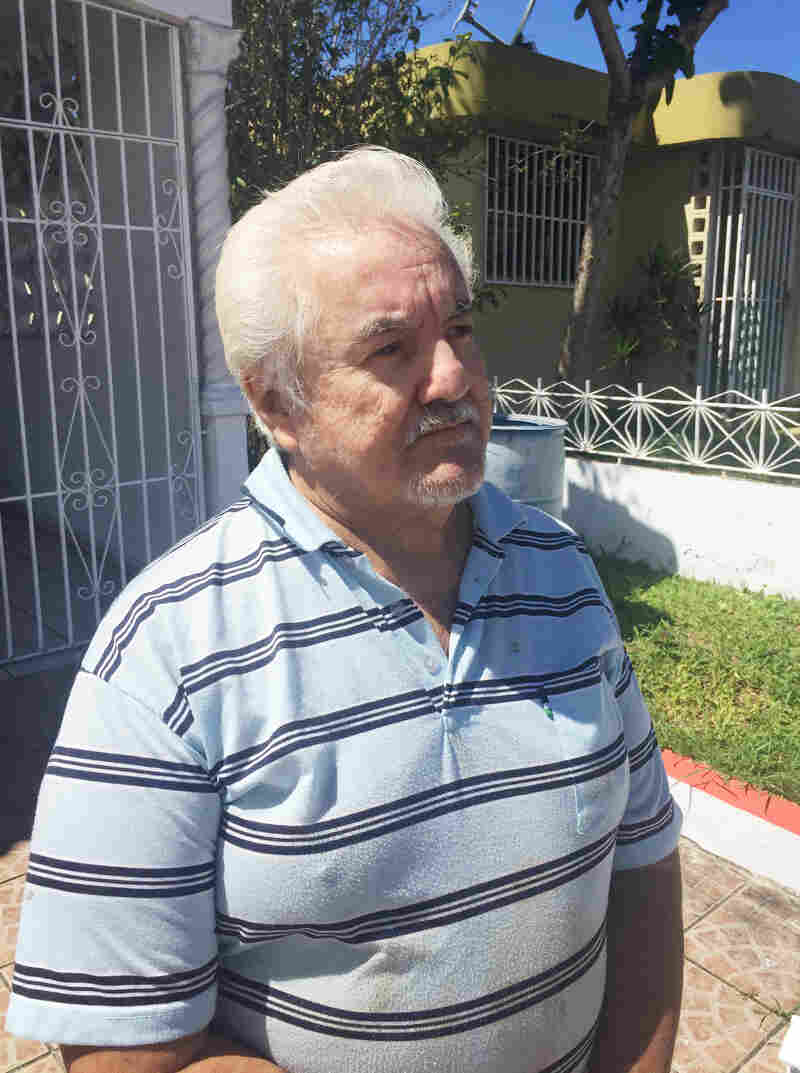 After a lifetime of agricultural work on the U.S. mainland, Ausberto Maldonado retired home to a suburb of San Juan, Puerto Rico. But he has diabetes, and especially since Hurricane Maria, has been struggling to get by. Sarah Varney/Kaiser Health News hide caption 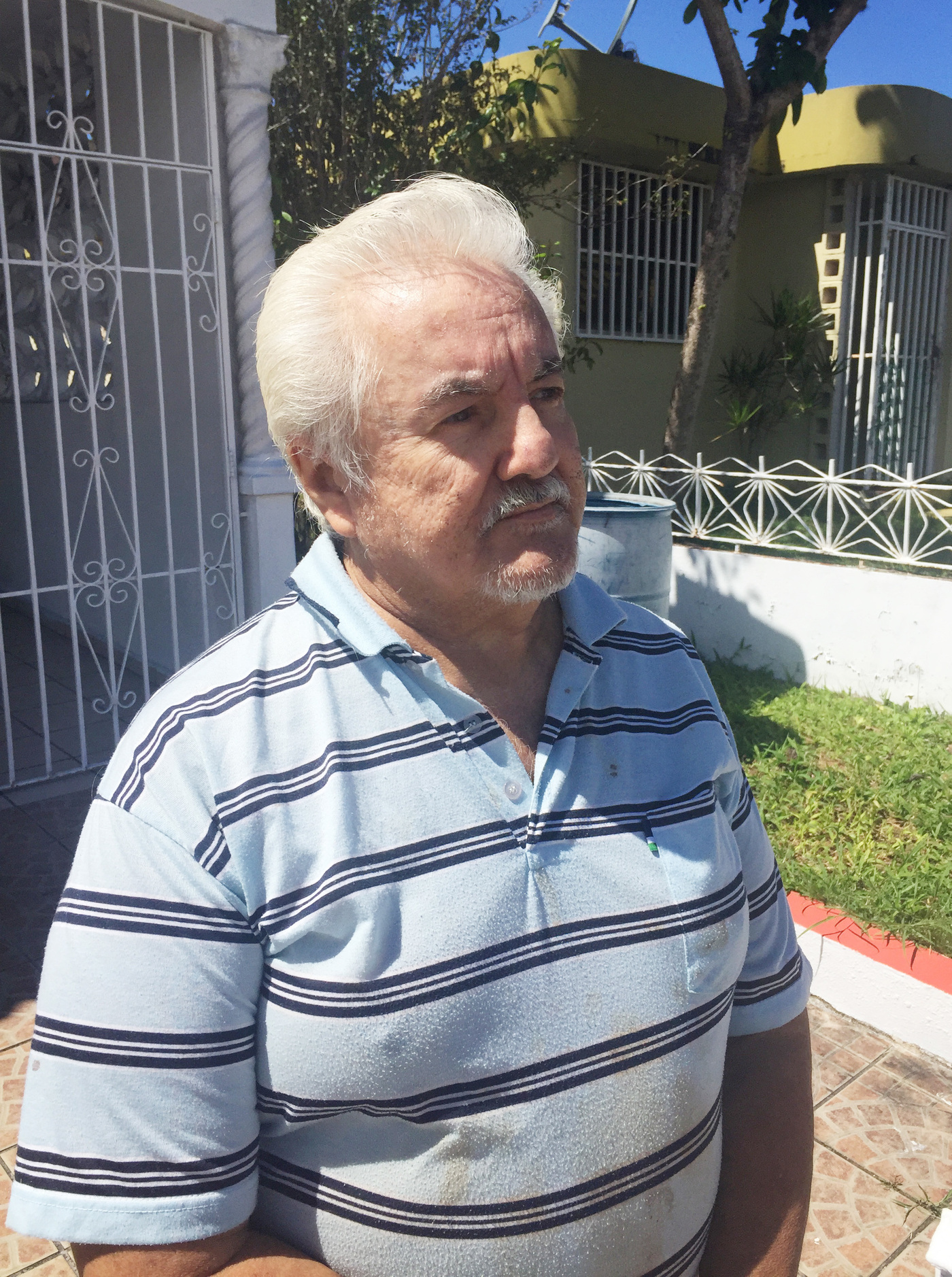 After a lifetime of agricultural work on the U.S. mainland, Ausberto Maldonado retired home to a suburb of San Juan, Puerto Rico. But he has diabetes, and especially since Hurricane Maria, has been struggling to get by.

Straddled across Ausberto Maldonado's backyard in Bayamon, Puerto Rico, a suburb of San Juan, is a nagging reminder of Hurricane Maria's destructive power.

"See, that tree broke off that branch, which is as thick as a tree — and now it's in my yard," says Maldonado, a 65-year-old retiree.

Rats scurry from under the downed tree, preventing Maldonado from hanging his laundry. To get the tree removed, he must show up in person at a local government office. But the diabetic ulcers on his feet make it painful to walk.

After a lifetime of work on the U.S. mainland picking corn and asparagus and processing chickens in poultry plants, Maldonado returned to Puerto Rico a decade ago to help care for his ailing mother, who has since died. Today the retiree finds himself living day-to-day on the island. He receives $280 a month in Social Security and $89 a month in food stamps — or about $3 a day for food.

Six months after Hurricane Maria devastated Puerto Rico and its economy, the daily indignities are piling up, especially for people who are frail or elderly. Many are finding their current economic straits nearly as threatening as the storm.

The emergency government support that helped pay for some health care and medically related transportation needs of Puerto Ricans after Hurricane Maria is running out. Private donations of water and food have slowed. And it's not clear who, if anyone, will carry on with that work.

Maldonado opens the cupboards in his tidy kitchen. There are a few cans of corned beef, SpaghettiOs and beans. When I ask him what he usually makes for himself, he sounds wistful.

"When I have enough food, when I do my groceries," he says, "I have eggs and bread and coffee and juice for breakfast. I would make spaghettis or some sort of salad and maybe a little dessert." 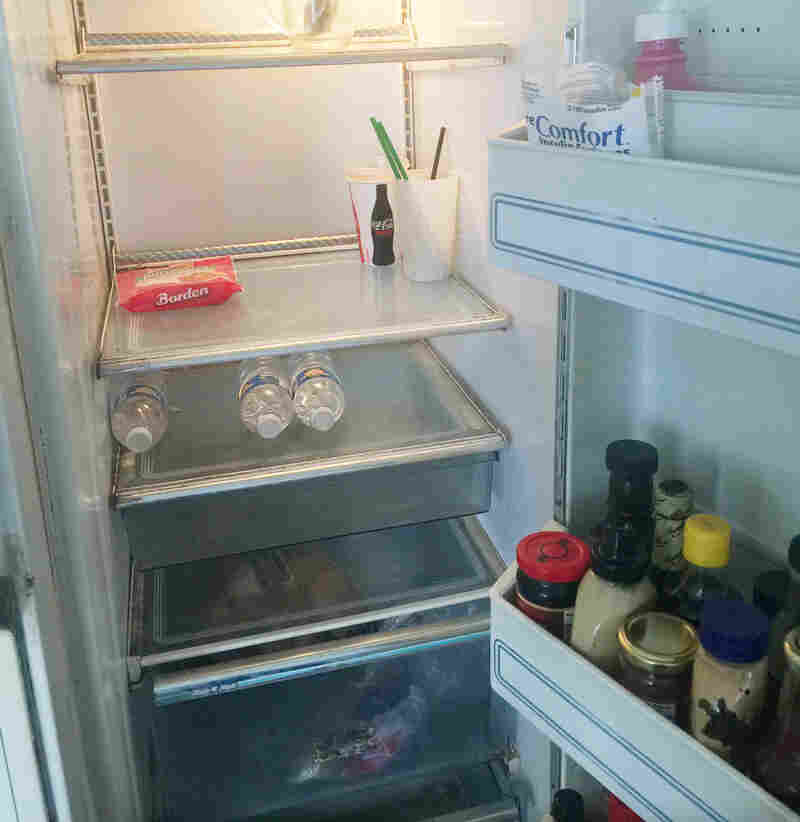 Though the light in Maldonado's refrigerator still works, power outages during Hurricane Maria broke the mechanism that helps keep food — and the insulin he depends on — cold. Sarah Varney/Kaiser Health News hide caption 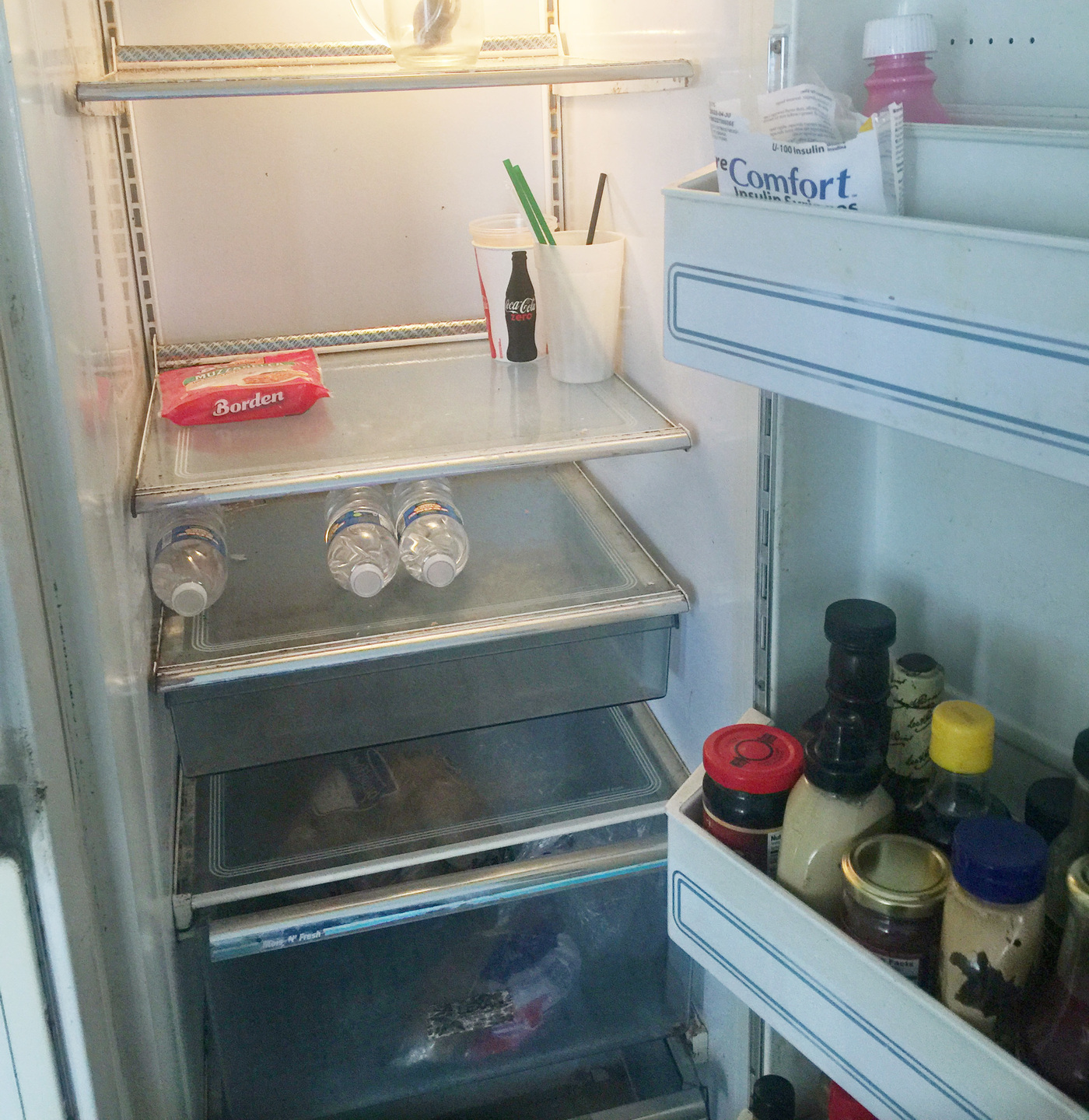 Though the light in Maldonado's refrigerator still works, power outages during Hurricane Maria broke the mechanism that helps keep food — and the insulin he depends on — cold.

But, in truth, the oven is unplugged, there is no juice or eggs or lettuce. It has been months since Maldonado has had fresh vegetables in the house.

"When there's very little, then I kind of go on a diet," he says.

It was hard enough for the retiree to fill his cupboards before the storm, but now, as many aid groups are winding down their donations, Maldonado needs to find money to buy clean, bottled water and to replace his refrigerator, which was ruined during the hurricane.

To buy groceries, he must wait two weeks for his next Social Security check.

"I'm waiting until the 10th so I can go do my grocery shopping again — if I can find a way to get there," Maldonado says. "That's when I would have food again, enough to make three meals — lunch, breakfast and dinner."

Maintaining a decent diet isn't simply about staving off hunger; diabetes is consuming Maldonado's foot, and unless he eats healthy food and takes his insulin, doctors have warned him, his foot will need to be amputated.

Maldonado opens the door to his broken refrigerator and points to a vial that holds a few drops of insulin — the last of his supplies until he can afford the $3 copay for his refills and find a ride to the pharmacy.

"The pharmacist said it could be stored in a dark place [without refrigeration] for a couple of weeks," he says.

Ideally, insulin should be kept cool, but broken refrigerators and a lack of power in many homes in Puerto Rico pose grim hazards for the island's expanding population of people with diabetes.

A visiting nurse, Leslie Robles, shows up for her monthly visit to Maldonado's home. She examines the 3-inch gaping wound on his foot. They sit at the kitchen table under a painting of The Last Supper and sift through piles of paperwork for Maldonado's upcoming cataract surgery.

Robles tells him that the free medical transportation service that the government made available to large numbers of people after the storm is expiring soon, and he'll no longer qualify for free rides.

What Robles does not say is that the visiting nurse program she works for, operated by VarMed, a health care management company whose services had been paid for by the government, is shutting down too.

VarMed has been helping to coordinate medical care, social services and housing for thousands of Puerto Ricans for four years. But, already, in recent weeks, the company has laid off more than 100 nurses and social workers across the island as the local government seeks to overhaul its Medicaid contract with insurance companies.

It is unclear how much longer Robles will be able help Maldonado and other patients like him who are on Medicaid and have complex medical needs — the so-called "high cost, high need" patients on the island.

The government wants Medicaid-contracted insurers to develop their own programs for these patients, but the earliest that would happen is this fall.

In the meantime, Maldonado says he has no one to help him grocery shop, fill prescriptions and get to doctor's appointments; the volunteers who helped him survive Hurricane Maria are returning to their own lives. In many ways, he, too, is returning to the same spartan life he had before the storm. But with a weakened island safety net that continues to unravel, and with his own health increasingly tenuous, Maldonado feels alone.