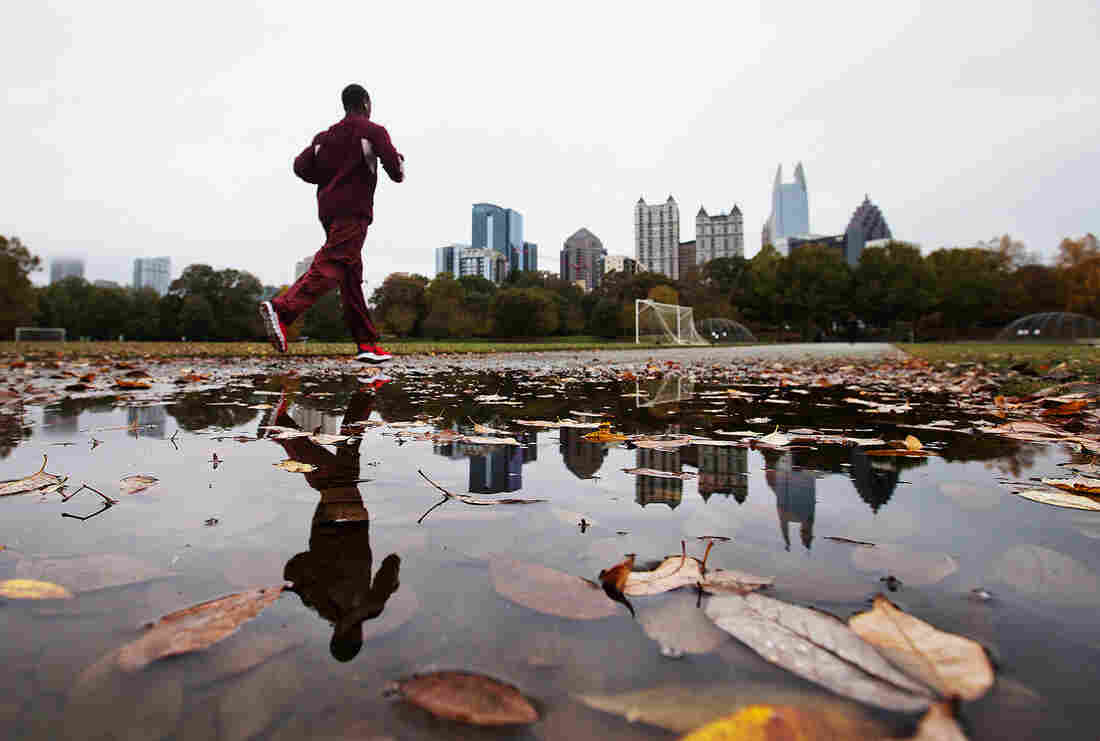 There's a 12-year or greater difference in life span among neighborhoods in Fulton County, Georgia, of which Atlanta is the county seat. David Goldman/AP hide caption 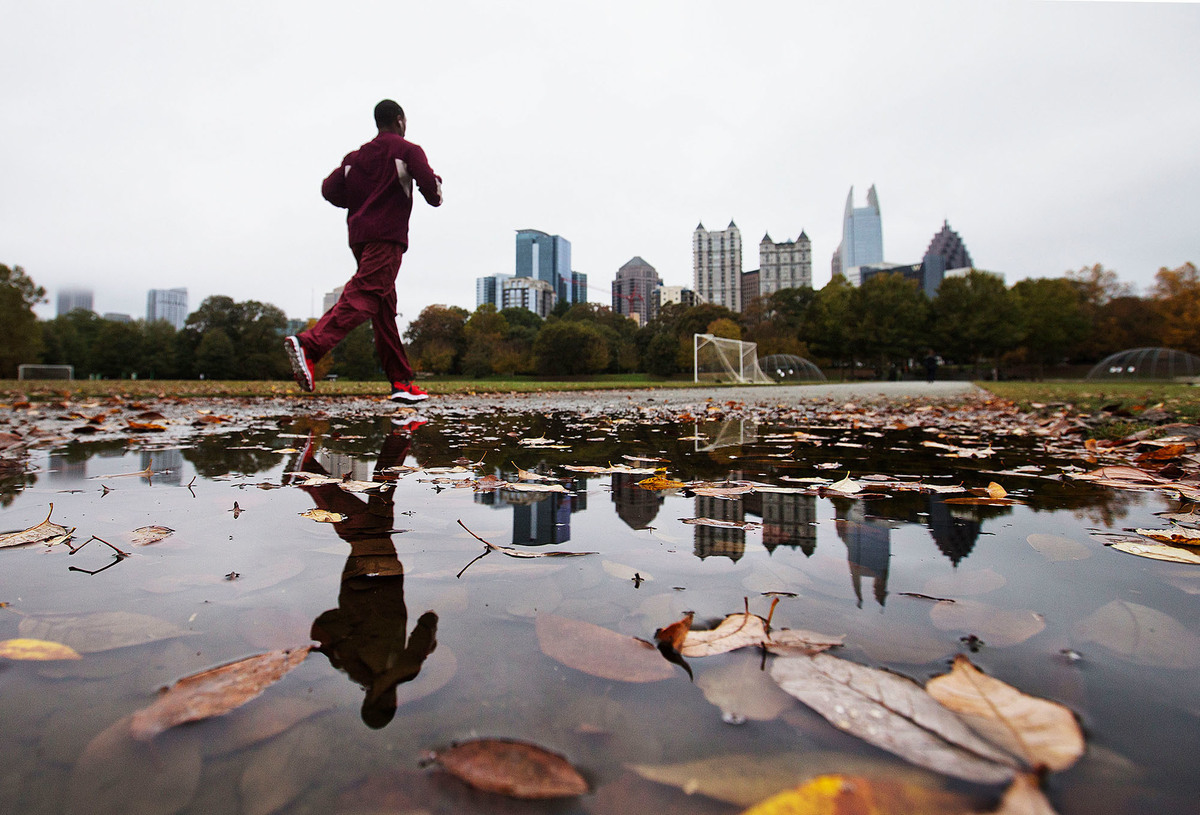 There's a 12-year or greater difference in life span among neighborhoods in Fulton County, Georgia, of which Atlanta is the county seat.

While public safety commissioner Bull Connor's police dogs in 1963 attacked civil rights protesters in Birmingham, Ala., leaders in Martin Luther King Jr.'s hometown of Atlanta were burnishing its reputation as "the city too busy to hate."

Yet 50 years after the civil rights leader was killed, some public health leaders in Atlanta wonder whether the city is failing to live up to King's call for justice in health care. They point to substantial disparities, particularly in preventive care.

"We have world-class health care facilities in Atlanta, but the challenge is that we're still seeing worse outcomes" for African-Americans, says Kathryn Lawler, executive director of the Atlanta Regional Collaborative for Health Improvement. That group includes representatives of more than 100 nonprofit organizations, governments, hospital systems and other health care providers working to improve access and care for minority communities.

Of all the forms of inequality, injustice in health is the most shocking and inhuman.

"We did certain things here, we went through the civil rights era, and we did things like desegregation, but we just over the years never kept the conversation going," says Tom Andrews, president of Mercy Care, a health center that serves mainly homeless Atlantans, the vast majority of whom are African-American.

-- Atlanta has the widest gap in breast cancer mortality rates between African-American women and white women of any U.S. city, with 44 black patients per 100,000 residents dying compared with 20 per 100,000 white women, according to a study in the journal Cancer Epidemiology in 2016.

-- It is the city with the nation's highest death rate for black men with prostate cancer — 49.7 deaths per 100,000 residents. The mortality rate for white men in Atlanta is 19.3, the National Cancer Institute reports.

-- There's a 12-year or greater difference in life span among neighborhoods in Fulton County, of which Atlanta is the county seat. Those living in the city's Bankhead or Northwest neighborhoods, which are predominantly black, fare worse when compared to those who live in affluent, mainly white Buckhead, researchers at Virginia Commonwealth University found.

-- Large gaps in mortality exist between African-Americans and whites in such diseases as HIV, stroke and diabetes, according to the Georgia Department of Public Health.

African-Americans make up just over half of the city's residents. But a recent study found that 80 percent of black children here live in neighborhoods with high concentrations of poverty, which often have poor access to quality medical care, while 6 percent of white children do. Several of the neighborhoods with predominately minority communities have poverty rates higher than 40 percent.

The health gaps between African-Americans and whites in Atlanta and other cities aren't because of shortcomings in the health care system alone, according to people who have studied the issue. They are also the result of decades of discrimination.

"It's a constellation of things," says Thomas LaVeist, chairman of the department of health policy and management at the George Washington University's school of public health in Washington, D.C. "African-Americans couldn't own land, wealth couldn't transfer from one generation to the next. Those were advantages [for whites] that were formed decades ago."

"The disparities are really national problems," he adds, "and there really is not a city that's spared."

The result has been, public health officials say, lower incomes, lower levels of education, higher stress, unsafe neighborhoods, lack of insurance and a host of other social factors that combine, over the years, to create differences in quality of health. 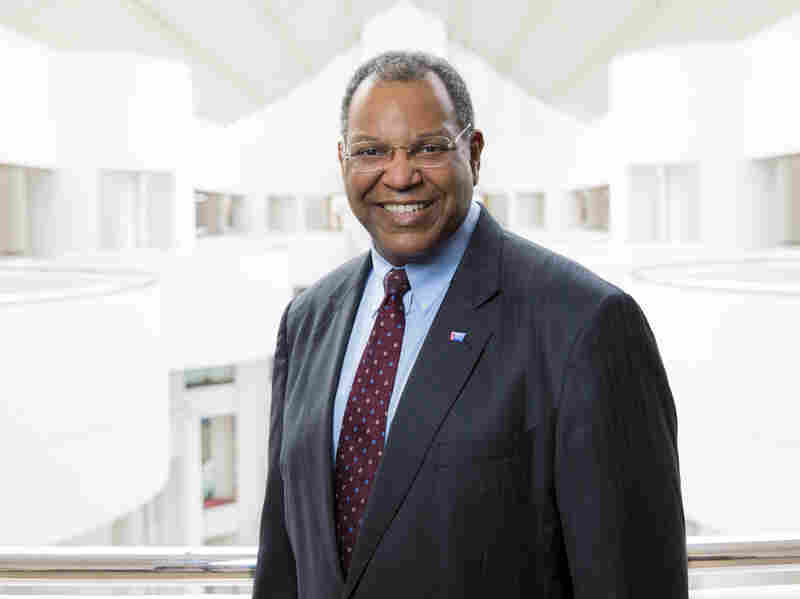 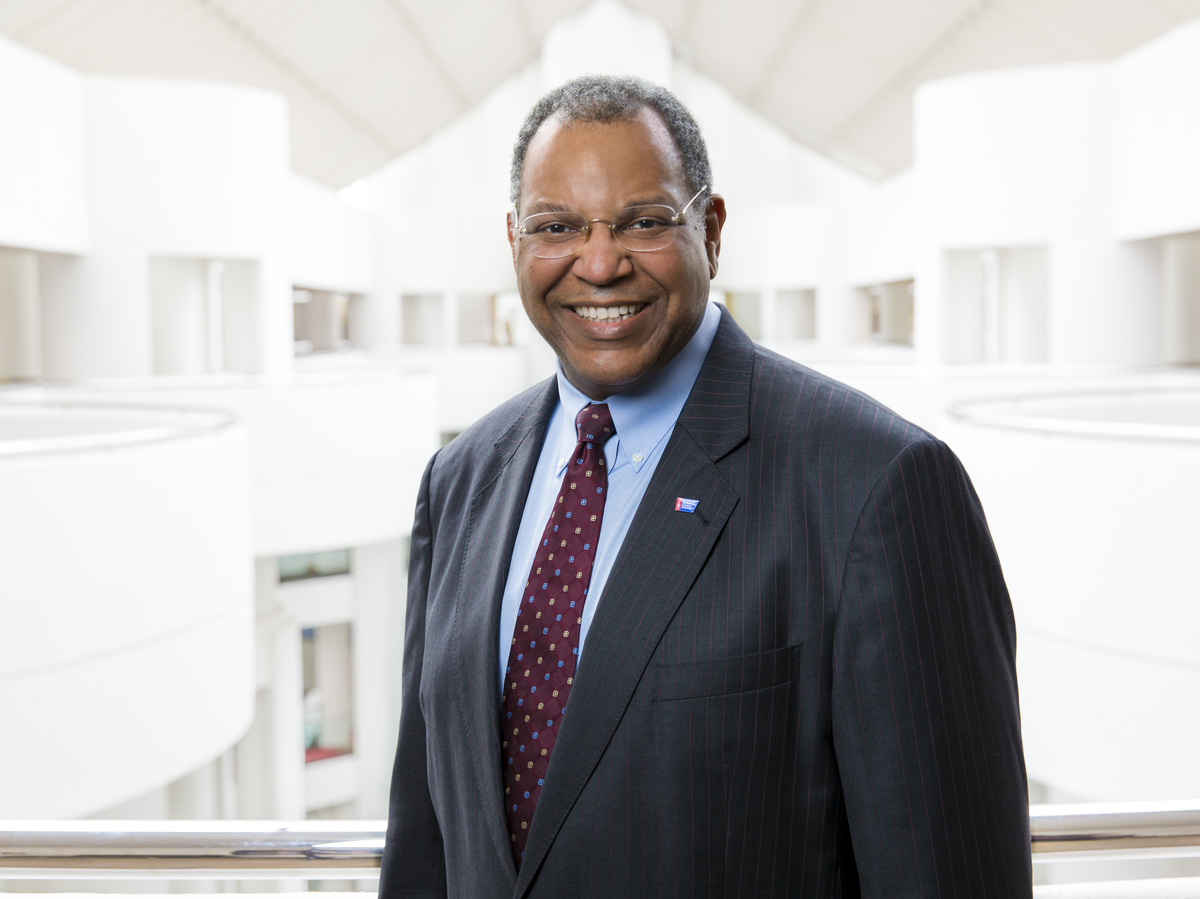 Otis Brawley, chief medical officer of the American Cancer Society, says that even after receiving a diagnosis, getting treatment can be difficult for some in Atlanta.

It starts with a lack of preventive care, says Dr. Otis Brawley, chief medical officer of the American Cancer Society and a longtime Atlanta resident. In addition to not having insurance or money for care, many African-Americans lack trust in the health care system and see it as another part of American life that has let them down.

Ricardo Farmer, 57, has not been to a doctor for a checkup in almost 30 years, he says. He is uninsured, and his funds are limited. More than anything, however, Farmer says he does not trust the health care system.

"If I don't have any symptoms, I feel like I don't need to go," says the tile setter.

Yet he has a back problem that causes him to miss work occasionally. He also has high blood pressure, which he has self-treated by reducing his salt intake and giving up meat. Asthma attacks sometimes force him to the emergency room.

An Abundance Of Health Care, For Some

Yet health care is still scarce in many poor neighborhoods.

"Atlanta spends $11 billion on health care in a given year, but much of that is misspent," says Lawler with the Atlanta Regional Collaborative for Health Improvement. Too many patients end up in emergency rooms, for example, because they don't have a primary care doctor or seek treatment after their illnesses are much more advanced, she added.

In addition, after being diagnosed, getting treatment can be difficult for some, says American Cancer Society's Brawley. African-American women are nearly four times more likely than whites to forgo treatment for breast cancer, which can include a combination of surgery, chemotherapy and radiation, he says.

Those involved in seeking better care for Atlanta's poor say the lack of insurance coverage also plays a huge role in the problem. Yet, that, too, is tied to race, since twice as many African-Americans than whites are uninsured in Georgia.

"One of the greatest barriers to care in all these states that didn't expand Medicaid [under the Affordable Care Act] is lack of insurance," says Brawley. "And it happened in all of the states of the 'Old Confederacy.' This is a huge racial insult."

But State Rep. Jason Spencer says Republicans' opposition to Medicaid expansion "had nothing to do with race." He says whites living in parts of northern Georgia also have higher mortality rates. "The common denominator is education and finances. The race card is a worn-out, tiresome excuse." 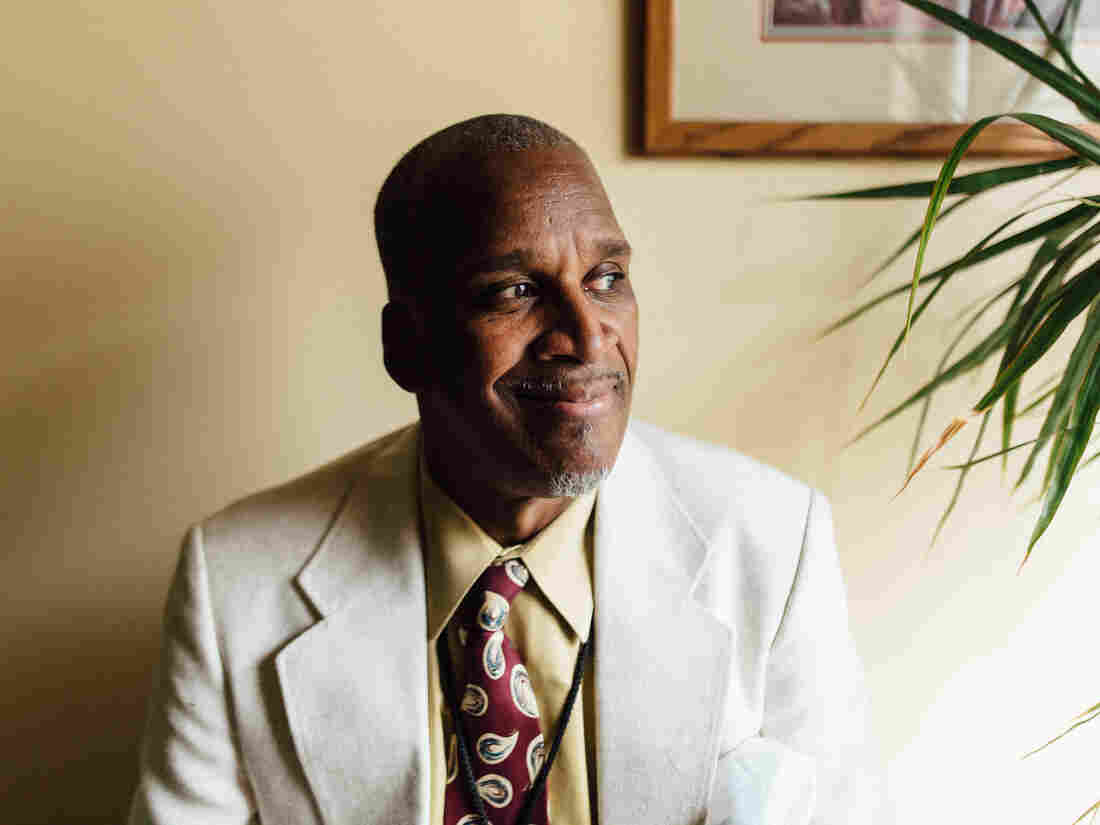 Austin Gilmore of Atlanta started drinking after losing his wife to cancer. He was uninsured and says he "didn't even know I was depressed." But at first, he didn't know where to turn for help. Mary Claire Stewart/Mercy Care hide caption 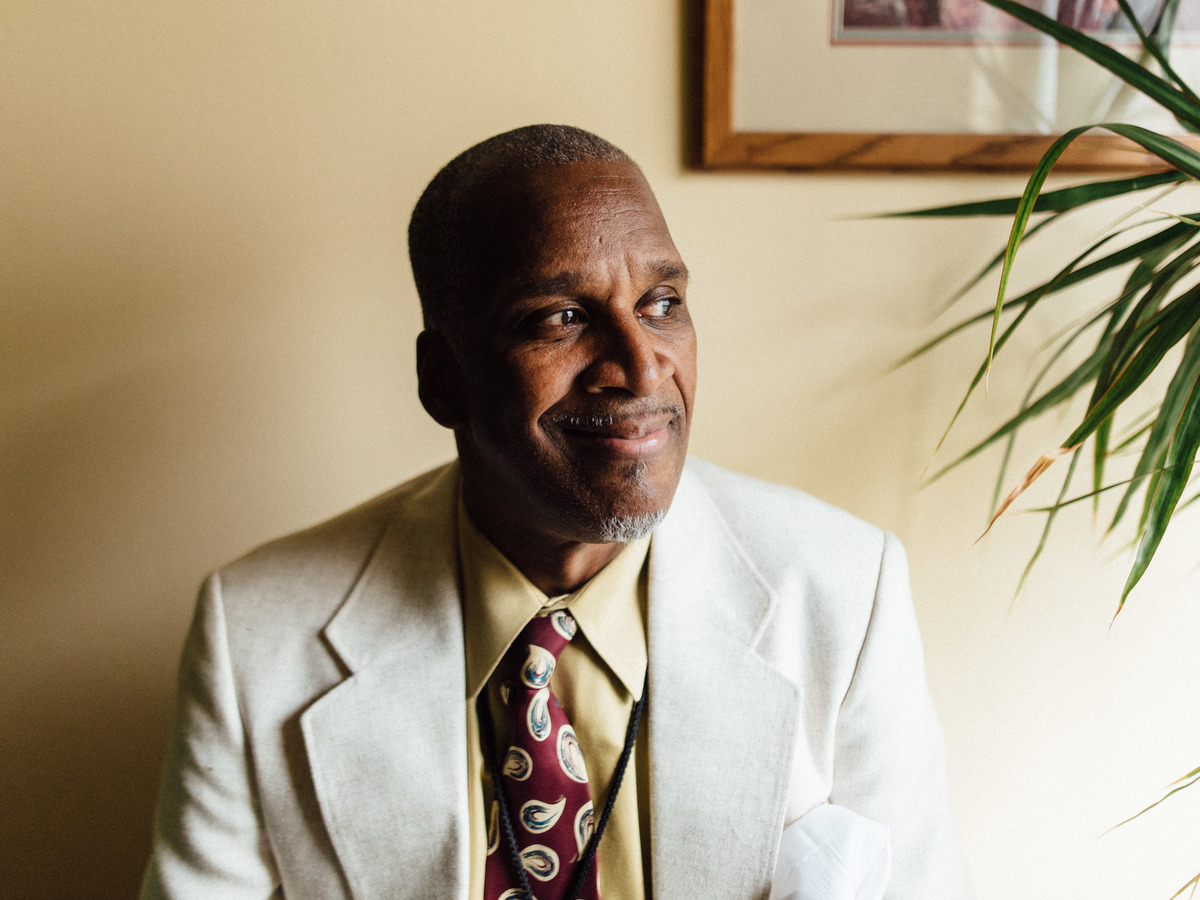 Austin Gilmore of Atlanta started drinking after losing his wife to cancer. He was uninsured and says he "didn't even know I was depressed." But at first, he didn't know where to turn for help.

"I Didn't Want To Think About Bad Things"

Austin Gilmore, 60, is emblematic of the patients who don't have a regular physician.

He had a roofing business and lived with his wife in a four-bedroom house with two bathrooms. But he lost his bearings when she died in 2011 from kidney disease.

"I didn't even know I was depressed," says Gilmore. He started drinking and eventually lost his house and his business."I had no livelihood, no job, no place to live. I didn't want to think about bad things, so I drank," Gilmore says. He knew he was harming his health. But without insurance and with few economic resources, he didn't know where to turn for help.

In September 2016, Gilmore decided he couldn't ignore his health issues any longer. He went to an emergency room and after several days of treatment was referred to Mercy Care for longer-term care. He has been sober for 19 months.

"I thank God for Mercy Care," Gilmore says. "I can't think of where I'd be without them."