Accessibility links
Lack Of Research On Medical Marijuana Leaves Patients In The Dark : Shots - Health News Suffering Americans seek medical marijuana as an alternative to opioids and other powerful pharmaceuticals. Though legal in 29 states, doctors say the lack of strong data make it hard to recommend. 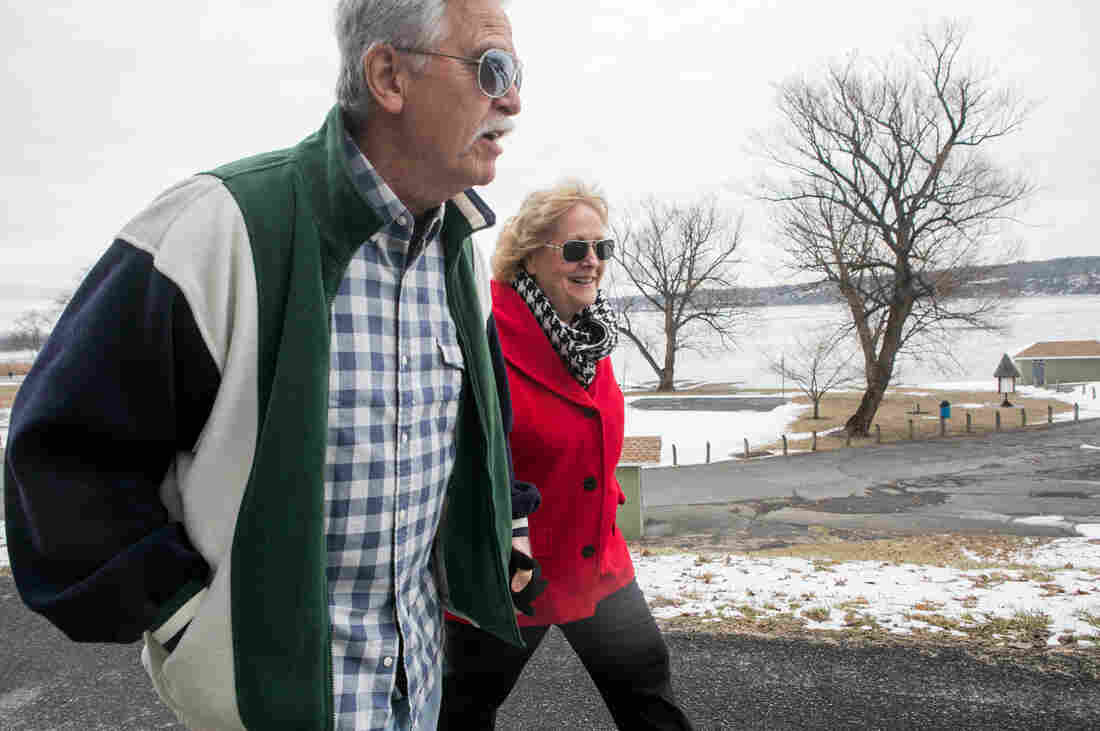 Ann Marie Owen walks with her husband, Bruce, near their home in Port Ewen, N.Y. Owen says the opioids prescribed by doctors made her feel sick and failed to ease her pain. Medical marijuana, she says, saved her life. Allyse Pulliam for Kaiser Health News hide caption 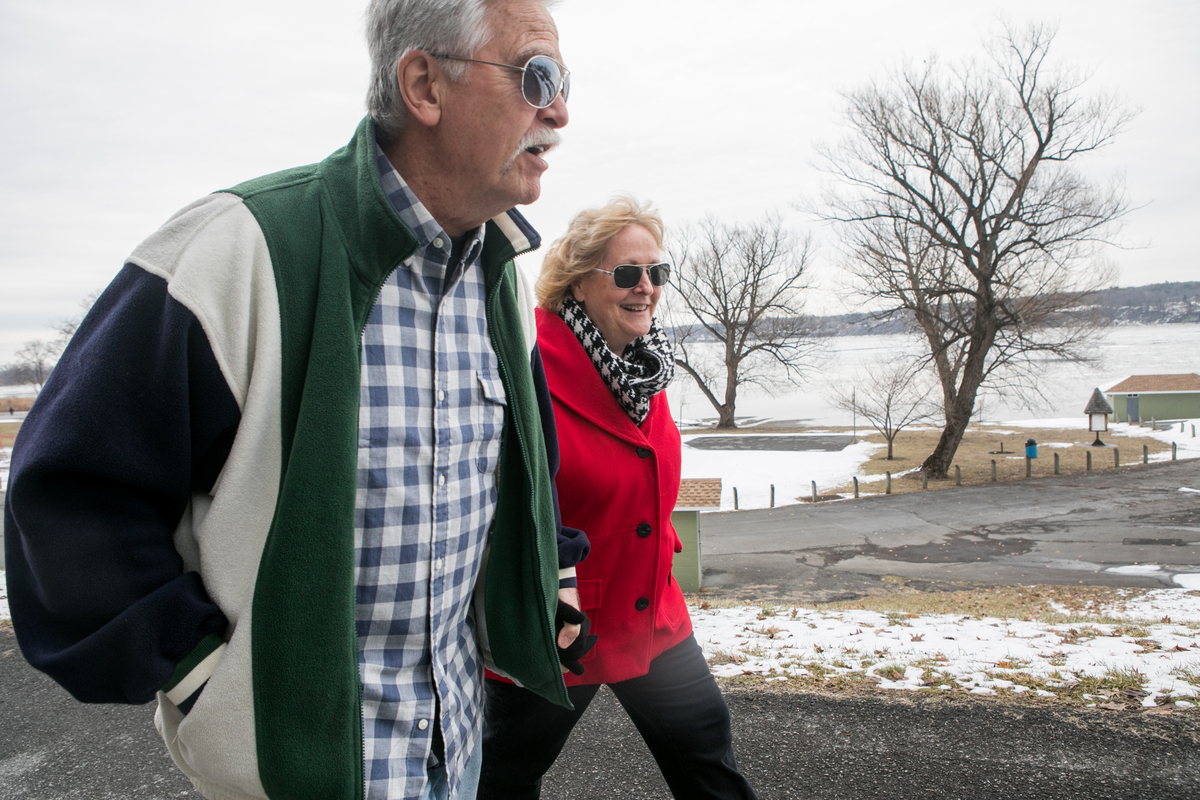 Ann Marie Owen walks with her husband, Bruce, near their home in Port Ewen, N.Y. Owen says the opioids prescribed by doctors made her feel sick and failed to ease her pain. Medical marijuana, she says, saved her life.

By the time Ann Marie Owen, 61, turned to marijuana to treat her pain, she was struggling to walk and talk. She was also hallucinating.

For four years, her doctor prescribed a wide range of opioids for transverse myelitis, a debilitating disease that caused pain, muscle weakness and paralysis.

The drugs not only failed to ease her symptoms, they hooked her.

When her home state of New York legalized marijuana for the treatment of select medical ailments, Owens decided it was time to swap pills for pot. But her doctors refused to help.

"Even though medical marijuana is legal, none of my doctors were willing to talk to me about it," she says. "They just kept telling me to take opioids."

Although 29 states have legalized marijuana to treat pain and other ailments, the growing number of Americans like Owen who use marijuana and the doctors who treat them are caught in the middle of a conflict in federal and state laws — a predicament that is only worsened by thin scientific data.

Because the federal government considers marijuana a Schedule 1 drug, research on marijuana or its active ingredients is highly restricted and even discouraged in some cases.

Underscoring the federal government's position, Health and Human Services Secretary Alex Azar recently pronounced that there was "no such thing as medical marijuana."

Scientists say that stance prevents them from conducting the high-quality research required for FDA approval, even as some early research indicates marijuana might be a promising alternative to opioids or other medicines.

Patients and physicians, meanwhile, lack guidance when making decisions about medical treatment for an array of serious conditions. 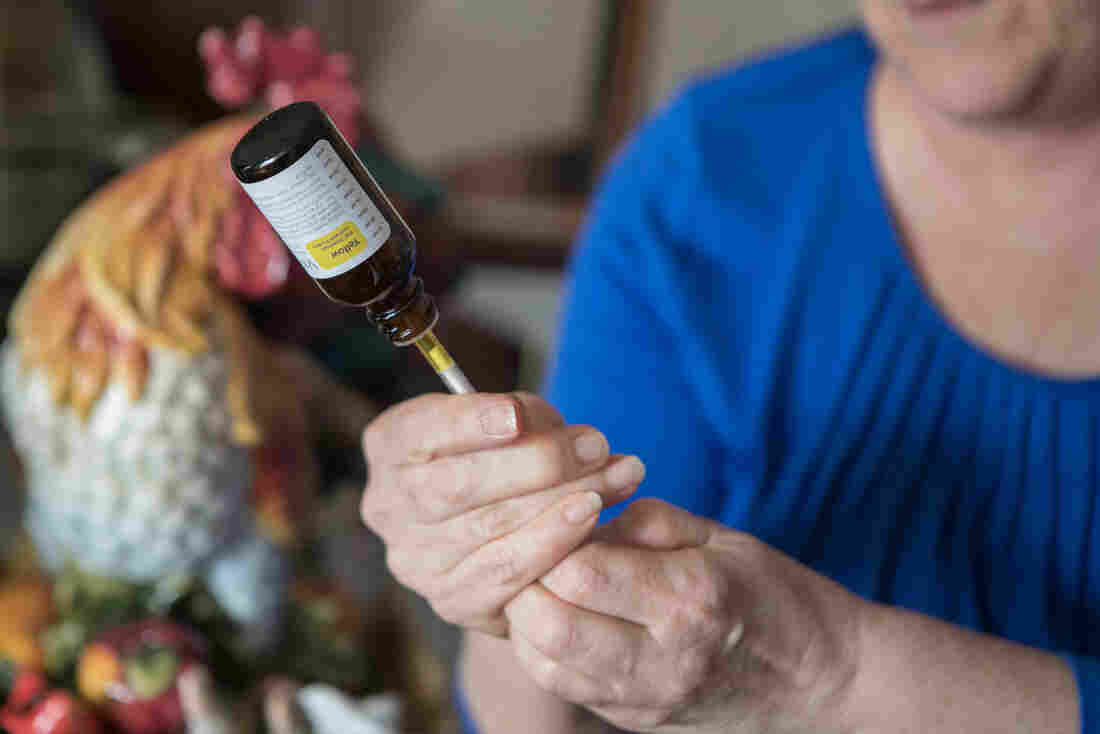 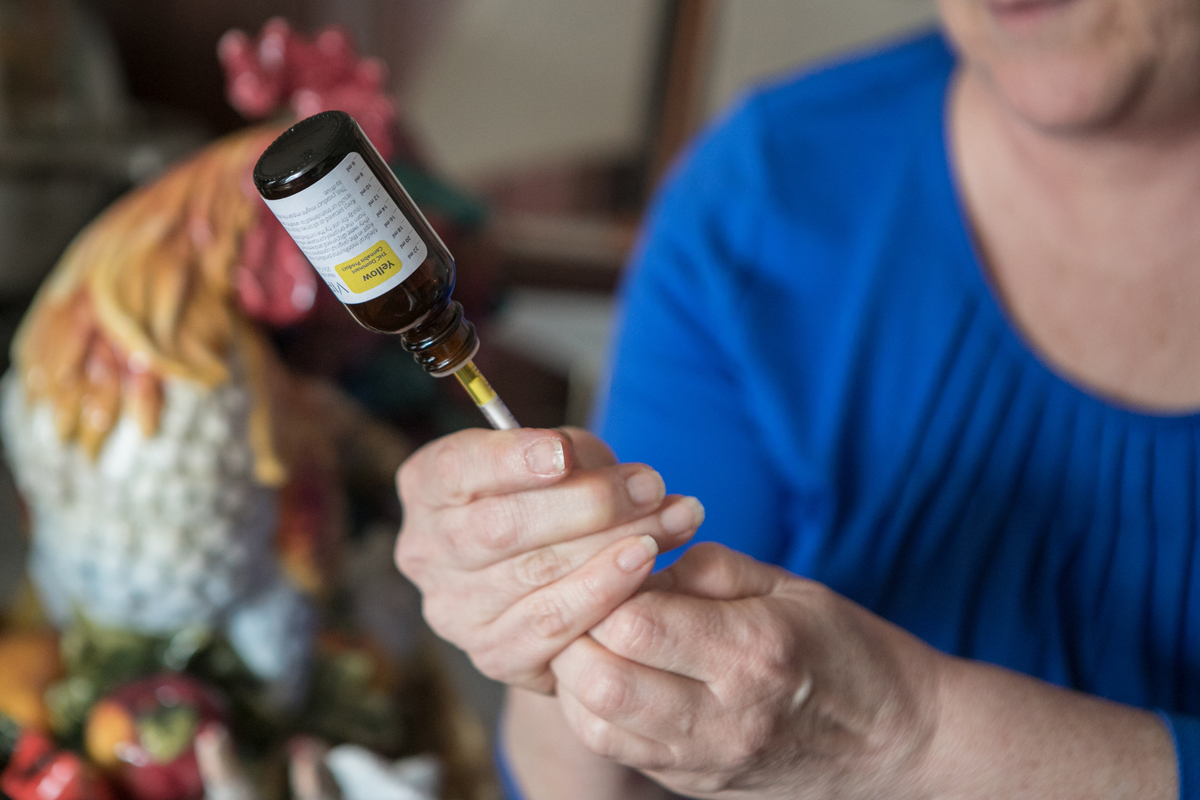 "We have the federal government and the state governments driving a hundred miles an hour in the opposite direction when they should be coming together to obtain more scientific data," says Dr. Orrin Devinsky, director at New York University's Comprehensive Epilepsy Center. Devinksy is researching the effects of cannabidiol, an active ingredient of marijuana, on epilepsy. "It's like saying in 1960, 'We're not going to the moon because no one agrees how to get there.' "

The problem stems partly from the fact that the federal government's restrictive marijuana research policies have not been overhauled in more than 40 years, researchers say.

Only one federal government contractor grows marijuana for federally funded research. Researchers complain the pot grown by a contractor at the University of Mississippi is inadequate for high-quality studies.

"It's public policy before science," says Chinazo Cunningham, a primary care doctor at the Albert Einstein College of Medicine and the lead investigator on one of the few federally funded studies exploring marijuana as a treatment for pain. "The federal government's policies really make it much more difficult."

Cunningham received a five-year, $3.8 million federal grant to follow 250 HIV-positive and HIV-negative adults with chronic pain who use opioids and have been certified to get medical marijuana from a dispensary. But she is not allowed to administer marijuana directly to participants.

"It's a Catch-22," says Cunningham. "We're going to be looking at all of these issues — age, disease, level of pain — but when we're done, there's the danger that people are going to say 'Oh, it's anecdotal' or that it's inherently flawed because it's not a randomized trial."

Without clear answers, hospitals, doctors and patients are left to their own devices, which can result in poor treatment and needless suffering.

Hospitals and other medical facilities have to decide what to do with newly hospitalized patients who normally take medical marijuana at home.

Some have a "don't ask, don't tell" approach, says Devinsky, who sometimes advises his patients to use it. Others ban its use and substitute opioids or other prescriptions.

Young adults, for instance, have had to stop taking cannabidiol compounds for their epilepsy because they're in federally funded group homes, he says.

"These kids end up getting seizures again," he says. "This whole situation has created a hodgepodge of insanity."

Last year, the Drug Enforcement Administration had been gearing up to allow facilities other than the University of Mississippi to grow pot for research. But after the DEA received 26 applications from other growers, U.S. Attorney General Jeff Sessions halted the initiative.

The Department of Veterans Affairs also recently announced it would not fund studies using marijuana compounds to treat ailments such as pain.

The DEA and HHS have cited concerns about medical supervision, addiction and a lack of "well-controlled studies proving efficacy."

Patients in pain left to experiment

Patients, meanwhile, forge ahead on their own.

While experts say they don't know exactly how many older Americans rely on marijuana for medicinal purposes, the number of Americans 65 and older who say they are using the drug skyrocketed 250 percent from 2006 to 2013.

Owen, for one, kept searching for a doctor and eventually found a neurologist willing to certify her to use marijuana and advise her on what to take.

"It's saved my life," says the retired university administrative assistant who credits marijuana for weaning her off opioids. "It not only helps my pain, but I can think, walk, and talk again."

Mary Jo, a Minnesotan, is afraid of being identified as a medical marijuana user, even though she now helps friends navigate the process and it's legal in her home state.

"There's still a stigma," she says. Mary Jo found it eased her pain from a nerve condition. "Nobody helps you figure it out, so you kind of play around with it on your own."

Doctors and scientists worry about the implications of such experimentation.

In a sweeping report last year, the National Academies of Sciences, Engineering and Medicine called on the federal government to support better research, decrying the "lack of definitive evidence on using medical marijuana."

The national academies' committee reviewed more than 10,000 scientific abstracts related to the topic. It made 100 conclusions based on its review, including finding evidence that marijuana relieves pain and chemotherapy-induced nausea. But it found "inadequate information" to support or refute effects on Parkinson's disease.

Yet those who find that medical marijuana helps them can become fierce advocates, no matter what their doctors say.

Caryl Barrett, a 54-year-old who lives in Georgia, says she decided to travel out of state to Colorado to treat her pain from her transverse myelitis and the autoimmune disease neurosarcoidosis.

Georgia permits limited medicinal use of marijuana but has not set up dispensaries.

"I realized it worked and I decided to bring it back with me," she says. "I broke federal law."

The conflict in the law makes her uneasy. But Barrett, who had been on opioids for a decade, says she feels so strongly about it working that "if someone wants to arrest me, bring it on." 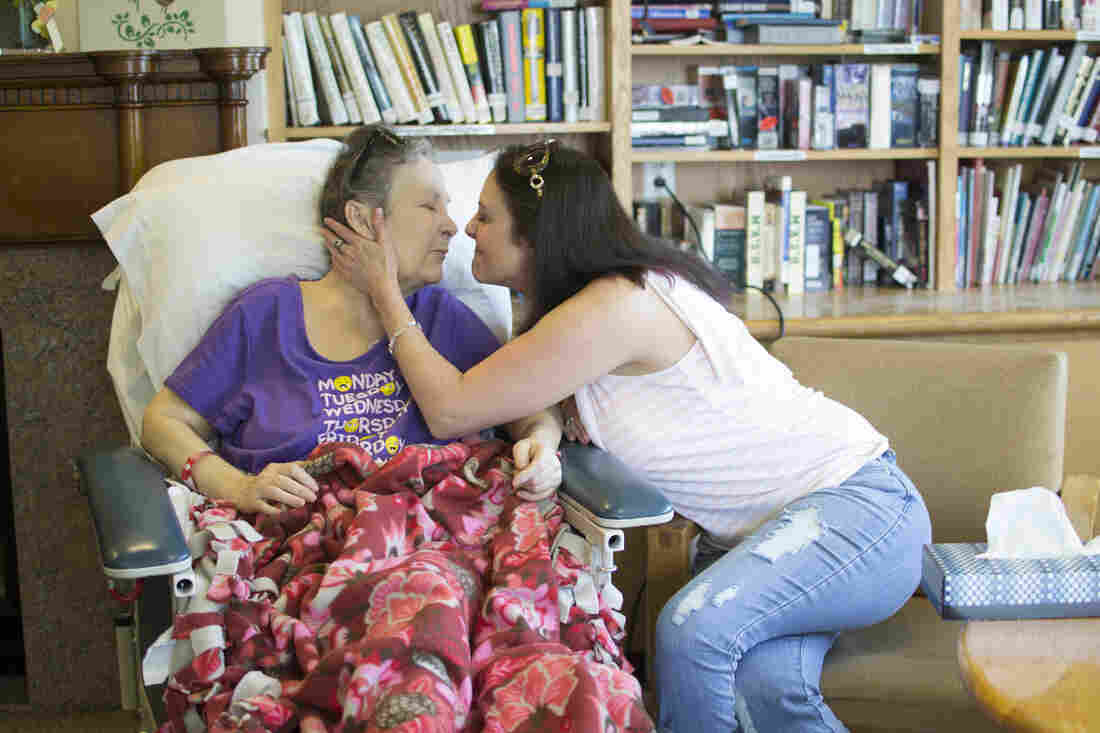 Melodie Beckham (left), here with her daughter, Laura, had metastatic lung cancer and chose to stop taking medical marijuana after it failed to relieve her symptoms. She died a few weeks after this photo was taken. Melissa Bailey/Kaiser Health News hide caption 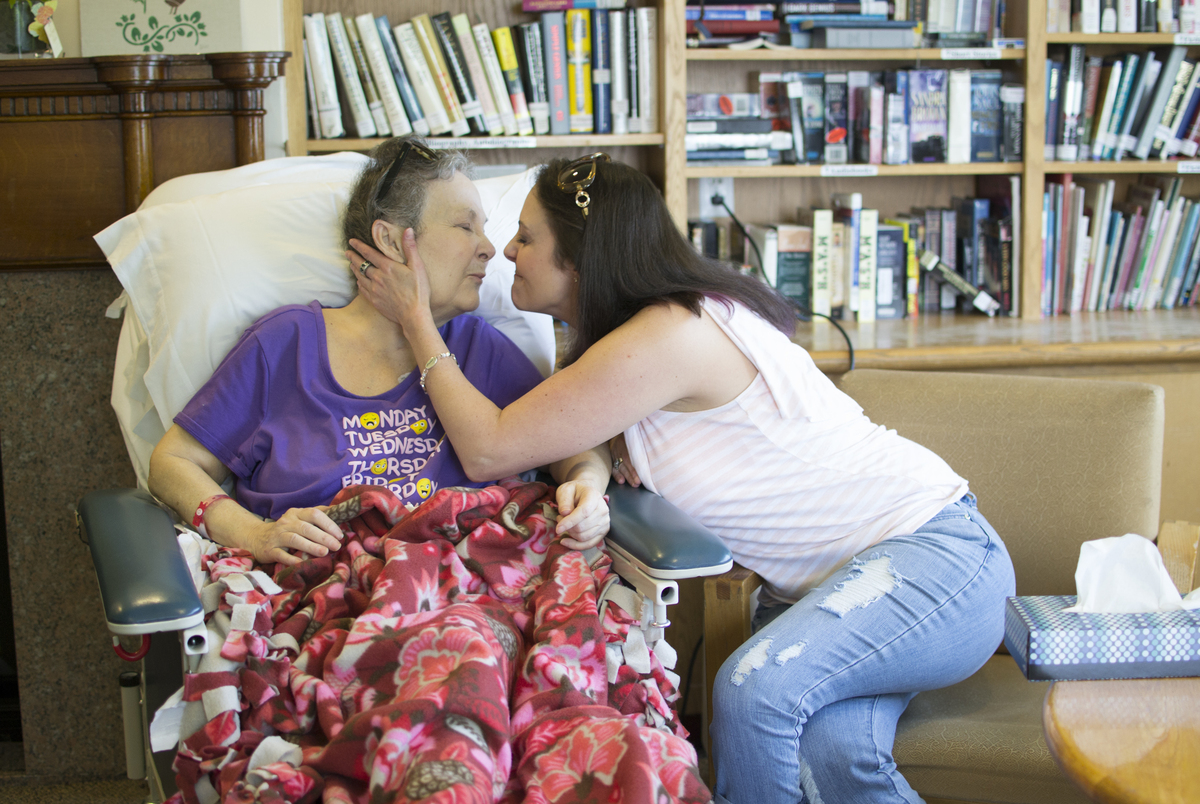 Melodie Beckham (left), here with her daughter, Laura, had metastatic lung cancer and chose to stop taking medical marijuana after it failed to relieve her symptoms. She died a few weeks after this photo was taken.

Melodie Beckham, who had metastatic lung cancer, tried medical marijuana for 13 days in a clinical trial at Connecticut Hospice before deciding to quit.

"She was hopeful that it would help her relax and just kind of enjoy those days," says her daughter, Laura Beckham.

Instead, it seemed to make her mother, who died in July at age 69, "a little more agitated or more paranoid."

The marijuana "didn't seem effective," nor did it keep her mother from hitting her pain pump to get extra doses of an opioid, her daughter says.

Researchers point out they are still exploring the basics when it comes to marijuana's effects on older adults or the terminally ill.

"We just have no data on how many older adults are using medical marijuana, what they are using it for and most importantly what are the outcomes," says Brian Kaskie, a professor at the University of Iowa's College of Public Health. "It's all anecdotal."

Kaskie, who specializes in public policy and the aging, received grants from the state of Colorado and the Chicago-based Retirement Research Foundation to survey the use of medical marijuana by older Americans.

In many quarters, there's a growing appetite for solid information, he says.

"When I first started this, my colleagues joked we were going to find all the aging hippies who listen to the Grateful Dead," says Kaskie, who has been studying medicinal marijuana for years. "Now, they're starting to realize this is a legitimate area of research."

In a recent funding announcement, the National Institutes of Health requested grant applications to study the effects of marijuana and other drugs on older adults and pain.

However, it continues to funnel much of its funding into studying the adverse effects of marijuana, researchers say.

Although NIH acknowledged in one of the announcements that some research supports "possible benefits" of marijuana, it emphasized "there have not been adequate large controlled trials to support these claims."