Accessibility links
Bill Of The Month: Hospital's CT Scan Cost 33 Times An Imaging Center's : Shots - Health News Why is the price of a CT scan 33 times higher in a hospital emergency room than in an outpatient imaging center just down the street? 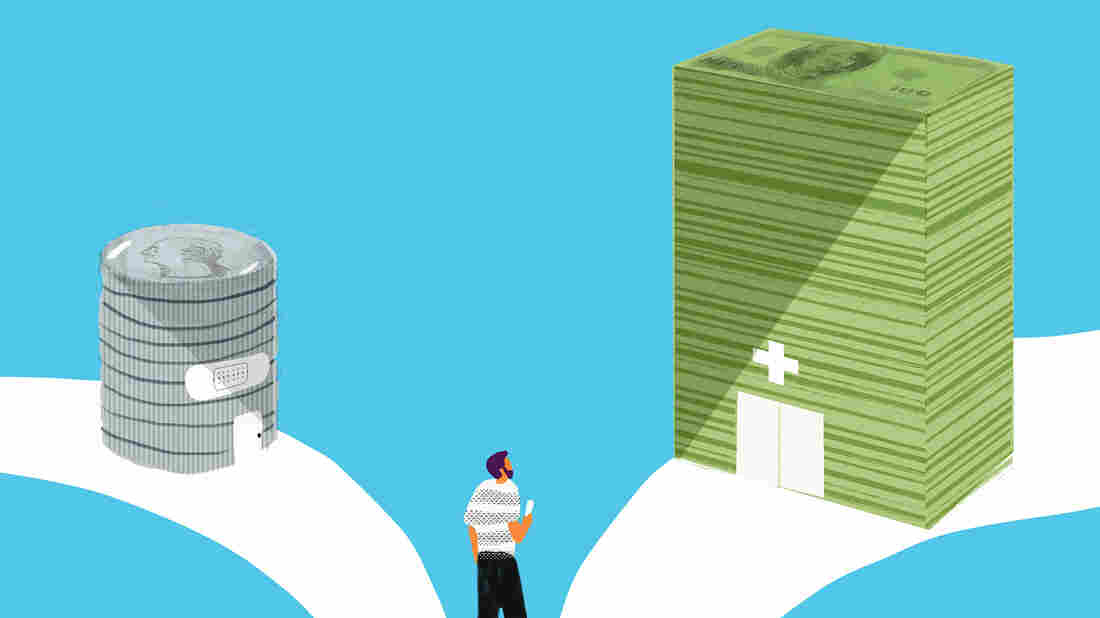 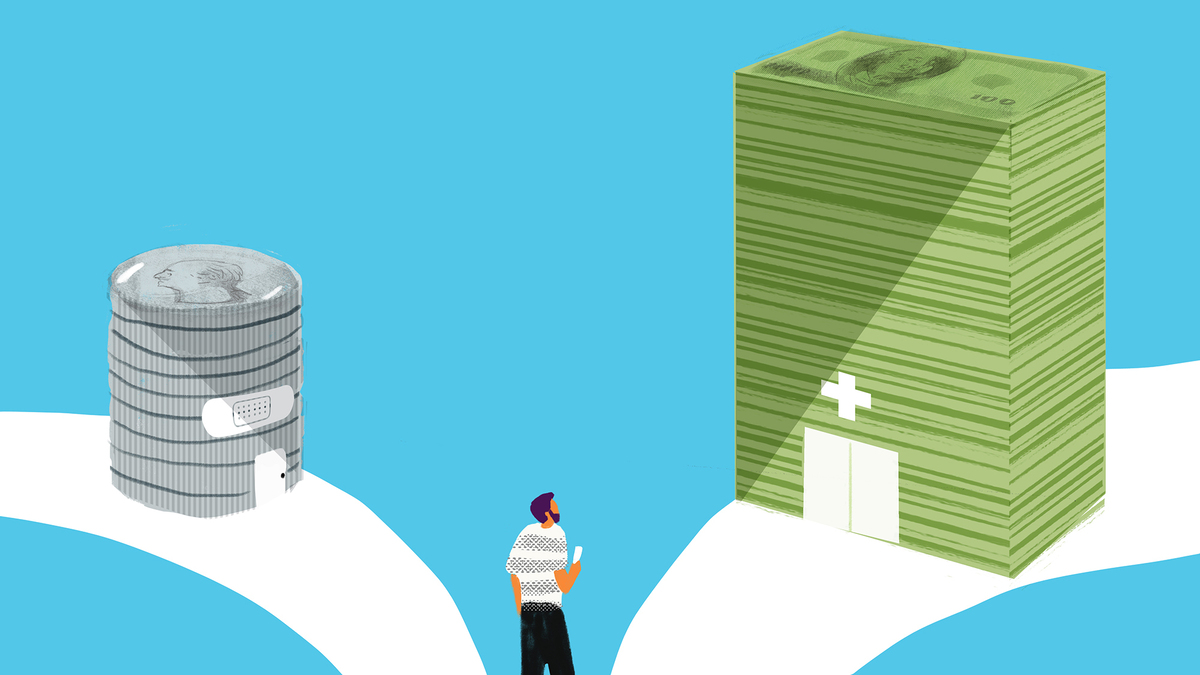 Benjamin Hynden, a financial adviser in Fort Myers, Fla., hadn't been feeling well for a few weeks last fall. He'd had pain and discomfort in his abdomen.

In October, he finally made an appointment to see his doctor about it. "It wasn't severe," he says. "It was just kind of bothersome. It just kind of annoyed me during the day."

The doctor, John Ardesia, checked him out and referred him to a nearby imaging center for a CT scan, or CAT scan as it used to be called. The radiologist didn't see anything wrong on the images, and Ardesia didn't recommend any treatment.

A few weeks later, Hynden, who has a high-deductible health insurance policy with Cigna, got a bill for $268. He paid it and moved on.

But three months later, in mid-January, Hynden was still feeling lousy. He called Ardesia's office again. This time the doctor wasn't available. A nurse practitioner, concerned that Hynden might be suffering from appendicitis, advised him to go to the hospital right away.

"I was a little worried," Hynden recalls. "When he told me to go to the ER, I felt compelled to take his advice."

Hynden arrived later that morning at Gulf Coast Medical Center, one of several hospitals owned by Lee Health in the Fort Myers, Fla., area. The triage nurse told him the problem wasn't his appendix, but she suggested he stick around for some additional tests – including another CT scan — just to be safe.

It was the same kind of scanner, he said. "It was the exact same test."

The results were also the same as the October scan: Hynden was sent home without a definitive diagnosis.

Medical procedure: A CT scan, which uses X-rays to create cross-sectional images of the body. Hynden got his October scan at Summerlin Imaging Center, a stand-alone facility in Fort Myers that offers a range of diagnostic tests, including X-rays, MRI and CT scans. 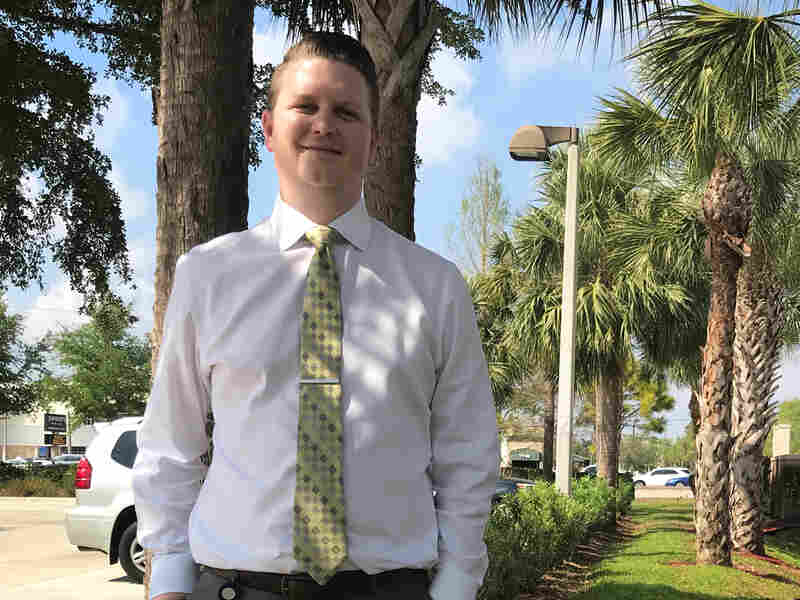 Benjamin Hynden was surprised when he received a bill for a CT scan that was 33 times higher than a scan he received a few months before at an imaging center. Alison Kodjak/NPR hide caption 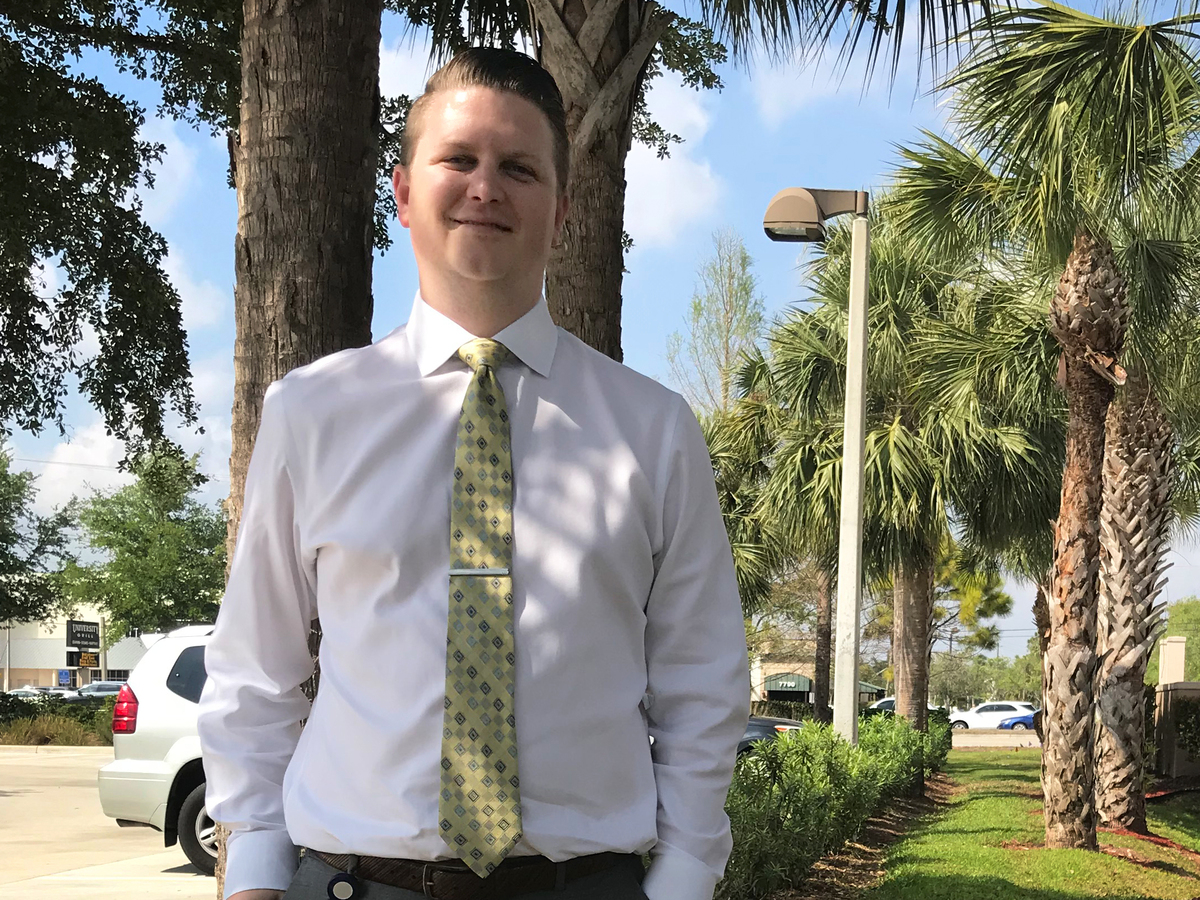 Benjamin Hynden was surprised when he received a bill for a CT scan that was 33 times higher than a scan he received a few months before at an imaging center.

Rick Davis, co-owner of Summerlin, says his center is small and independent, so he doesn't have much bargaining power. That means insurance companies pretty much dictate what he can charge for a scan. In Hynden's case that was $268, including the cost of a radiologist to read the images.

Ultimately, what Medicare decides to pay for a scan sets the standard. "The Medicare fee schedule is what all the other companies use as their guideline," Davis tells me as he gives me a tour of Summerlin. "It's basically the bible. It's what everyone goes by."

Summerlin's office manager, Kimberly Papiska, says the maximum the center ever bills for a CT scan is $1,200. But the rates insurance companies pay are usually less than $300.

Hynden was shocked when he got the second CT scan in January, and the listed price was $8,897 — 33 times what he paid for the first test.

Gulf Coast Medical Center is part of his Cigna insurance plan's approved network of providers. But even with Cigna's negotiated discount, Hynden was on the hook for $3,394.49 for the scan. The additional ER costs added $261.76 more to that bill.

What gives: We called Gulf Coast Medical Center and its parent company, Lee Health, to understand why they billed nearly $9,000 for a single test. No one at the health center or hospital would agree to an interview.

"Generally that it is not unusual for the cost of providing a CT scan in an emergency department to be higher than in an imaging center," the statement said. "Emergency department charges reflect the high cost of maintaining the staffing, medical expertise, equipment, and infrastructure, on a 24/7-basis, necessary for any possible health care need — from a minor injury to a gunshot wound or heart attack to a mass casualty event."

Do the hospital's costs and preparations justify a list price that's so much higher than the nearby imaging center's tab? We asked some experts in medical billing and management for their thoughts.

Emergency rooms often charge people with insurance a lot of money to make up for the free care they provide to uninsured patients, says Bunny Ellerin, director of the Health Care and Pharmaceutical Management program at Columbia Business School in New York. "Often those people are what they call in the lingo 'frequent flyers,' " Ellerin says. "They come back over and over again."

She says hospitals also try to get as much money as they can out of private insurance companies to offset lower reimbursements from Medicare and Medicaid.

Even in that context, the price of Hynden's hospital CT scan was high.

Healthcare Bluebook, an online pricing tool, says the range for an abdominal CT scan with contrast, like Hynden had, in Fort Myers is between $474 and about $3,700. It pegs a fair price at $595.

The higher price from Gulf Coast and its parent company could be a result of their enormous pricing power in Fort Myers, says Gerard Anderson, a professor of health policy and management at Johns Hopkins University.

Lee Health owns the four major hospitals in the Fort Myers area, as well as a children's hospital and a rehabilitation hospital, according to its website. It also owns several physician practices in the area. When you drive around Fort Myers, the blue-green Lee Health logo appears on buildings everywhere.

"Anybody who's in Fort Myers is going to want to get care at these hospitals. So by having a dominant position, they have great bargaining power," Anderson says. "So they can raise their rates, and they still do OK."

Anderson says his research shows hospital consolidation has been driving prices higher and higher in recent years. And because more and more people, like Hynden, have high-deductible insurance plans, they're more likely to be on the hook for huge bills.

So Lee Health and other dominant hospital systems mark up most of their services on their master price lists — the list that prices a CT scan at Lee Health at $8,897. Anderson calls those lists "fairy-tale prices" because almost no one actually pays them.

"Everybody who's taken a look at it agrees — including the CFO of the organization — that it's a fairy-tale thing, but it does have relevance," Anderson says.

The relevance is that insurance companies usually negotiate what they'll pay at discounted rates from list prices.

"If it wasn't for that CT scan, I don't think this whole thing would have been so difficult and so blatantly obvious that they're extremely overcharging for that service," Hynden says.

Resolution: Hynden never got a definitive diagnosis from the CT scans. Several weeks after his second test, however, he went to a nearby urgent care center, also run by Lee Health, and they performed an ultrasound on his abdomen. That test, which cost about $175, revealed some benign cysts that his doctor says are likely to go away on their own.

The takeaway: Tests and services are almost always going to be more expensive in an emergency room or hospital setting. If your doctor suggests you go to an ER, it might be worth asking whether an imaging center, urgent care or walk-in clinic would suffice.

Sources: Explanations of benefits provided by Hynden and interviews.