Accessibility links
Government Looks To Expand Hearing Aid Access : Shots - Health News The measure would remove a potential barrier to getting hearing aids by allowing Medicare beneficiaries to go to an audiologist for a hearing test to diagnose a hearing problem without a referral. 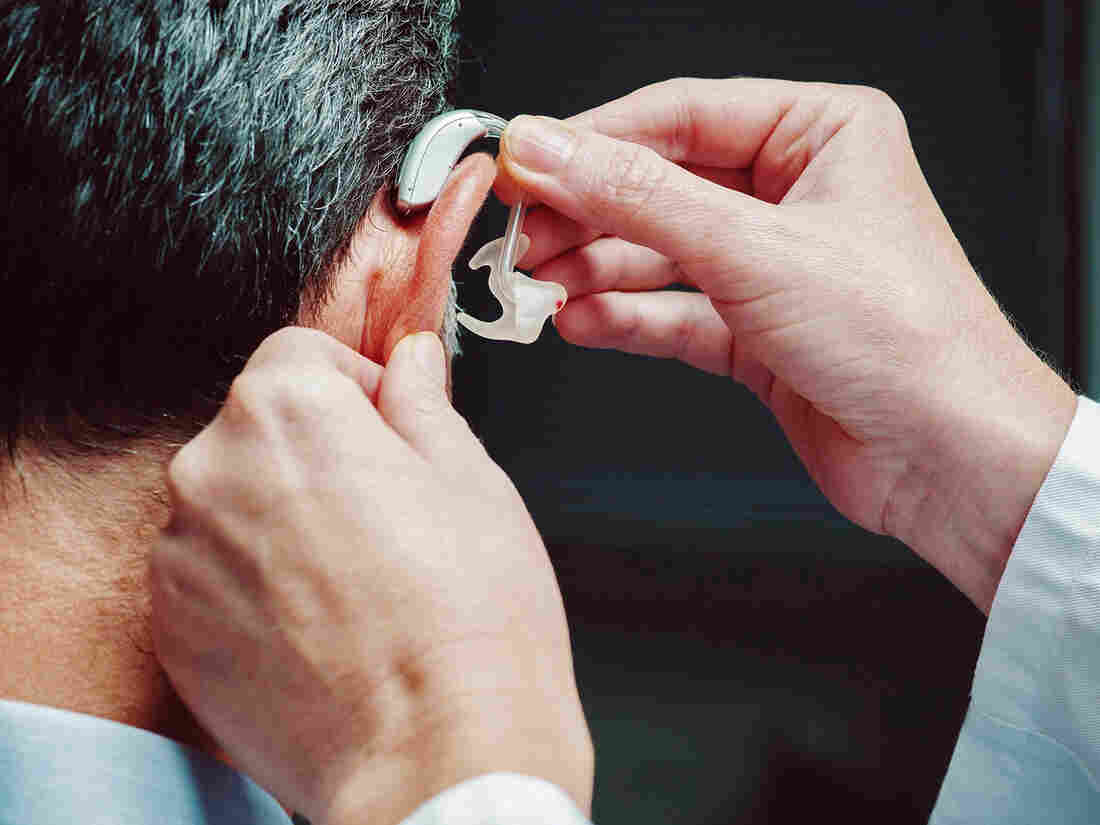 Under current law, Medicare requires patients to get a referral before seeing an audiologist to diagnose hearing loss. Leyla B / EyeEm/Getty Images hide caption 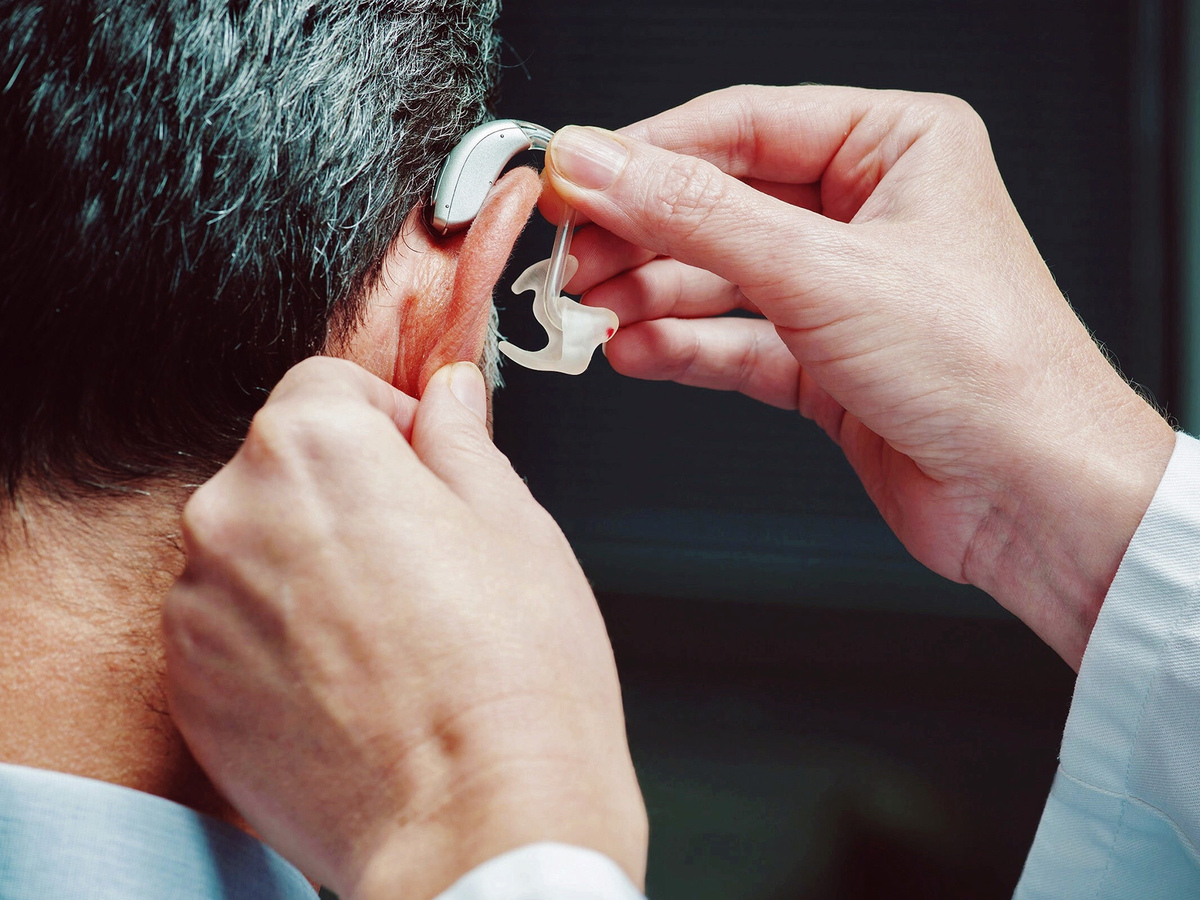 Under current law, Medicare requires patients to get a referral before seeing an audiologist to diagnose hearing loss.

Last December, Deb Wiese bought hearing aids for her parents, one for each of them. She ordered them online from a big-box retailer and paid $719 for the pair. But her parents, in their 80s and retired from farming in central Minnesota, couldn't figure out how to adjust the volume or change the batteries. They soon set them aside.

"Technology is not only unfamiliar, but unwelcome" to her parents, Wiese says. "I don't know what the answer is for people like that."

Only 10 to 20 percent of people with hearing loss use hearing aids, according to studies. The high cost of hearing aids, difficulty adjusting to them, lack of access to care and the stigma associated with wearing them discourages people, says Barbara Kelley, executive director and CEO of the Hearing Loss Association of America, a patient advocacy group.

Even if older adults can afford hearing aids, Medicare doesn't usually cover the services to fit and service them, so many people go without.

A law signed last summer by President Donald Trump directs the Food and Drug Administration to establish and regulate a new category of hearing aid to be sold over the counter for people with mild to moderate hearing loss. People will be able to buy products off the shelf without consulting an audiologist or hearing aid dispenser, and standards for online sales will be tightened. The agency has three years to develop safety and other consumer protection standards.

The National Academies of Sciences, Engineering and Medicine recommended that the FDA take that step in a 2016 report.

Although it should improve access, the new law doesn't address one of the biggest barriers faced by the nearly 50 million people with age-related hearing loss: insurance coverage.

Neither traditional Medicare nor most private insurers typically cover hearing aids. (Some Medicare Advantage plans provide some coverage, and some insurers may offer a discount if members use certain suppliers.)

"Cost has for many years been the Number One problem in the calls, emails and letters we get," says Kelley. "People say, 'I need hearing aids and I can't afford them.' It's really heartbreaking."

A bipartisan effort in Congress also could make it easier for Medicare beneficiaries to get some hearing assistance. A bill introduced by Sen. Elizabeth Warren (D-Mass.) and Sen. Rand Paul (R-Ky.) in March would allow them to visit an audiologist to get a hearing test to diagnose a hearing problem without first being referred by a physician or nurse practitioner. It would also allow audiologists to be reimbursed for treating non-hearing aid related services like wax removal.

Under current law, Medicare generally reimburses audiologists for diagnosing hearing loss in older adults but not for treating it, which could include providing assistance to fit, adjust and learn to make the most of hearing aids. This bill would not change Medicare's coverage of hearing aid services.

Losing the ability to hear well doesn't just mean people have to turn the volume way up on their favorite TV shows. Hearing loss is associated with depression, social isolation and an increased risk for cognitive decline and dementia in older adults.

Hearing aid prices vary widely, ranging from an average $900 to $3,100 apiece, according to a survey of hearing care professionals by the Hearing Review, a trade magazine. On the high end, devices may be Bluetooth-enabled to stream wirelessly from people's cellphones to their hearing aids, among other perks.

But not everyone needs or wants that much help. "Some people are very mildly impaired," says Kim Cavitt, a billing and reimbursement consultant and former president of the Academy of Doctors of Audiology who supports over-the-counter sales. "They don't have a $3,000 problem, they have a $300 problem."

Experts say they hope the over-the-counter hearing aid law will spur competition and product innovation and bring down prices.

One of the reasons hearing aid prices are often high is because the devices are typically bundled with a service package to fit, troubleshoot and maintain them.

Disentangling the service from the devices would benefit consumers, says Nicholas Reed, a faculty member at the Cochlear Center for Hearing and Public Health at Johns Hopkins Bloomberg School of Public Health who has studied over-the-counter hearing devices that provide results comparable to hearing aids.

People may still need some help using their hearing aids. In addition to basic hearing-aid fitting and maintenance, hearing care professionals can help people learn strategies to hear better, Reed says. For example, people learn to sit with their back to a wall at a restaurant to eliminate the sound behind them so they can focus on listening to the person in front of them.

"The over-the-counter law will lower the cost and make hearing aids more accessible," Reed says. "But if the services aren't covered, people, especially older adults with health literacy issues, will stop using them."

An earlier version of this story mischaracterized the legislation proposed by Sens. Elizabeth Warren and Rand Paul, suggesting that it would allow Medicare to pay audiologists to teach beneficiaries how to adjust to and use their hearing aids. In fact, the bill would allow Medicare beneficiaries to visit an audiologist to get a hearing test to diagnose a hearing problem without a referral. It does not expand the scope of hearing health benefits covered by Medicare.