Accessibility links
Nurses Help 911 Dispatchers Triage Calls : Shots - Health News One in four calls to the Washington, D.C., 911 line isn't an emergency. The city now has triage nurses working with dispatchers to get callers with less urgent needs a same-day clinic visit instead. 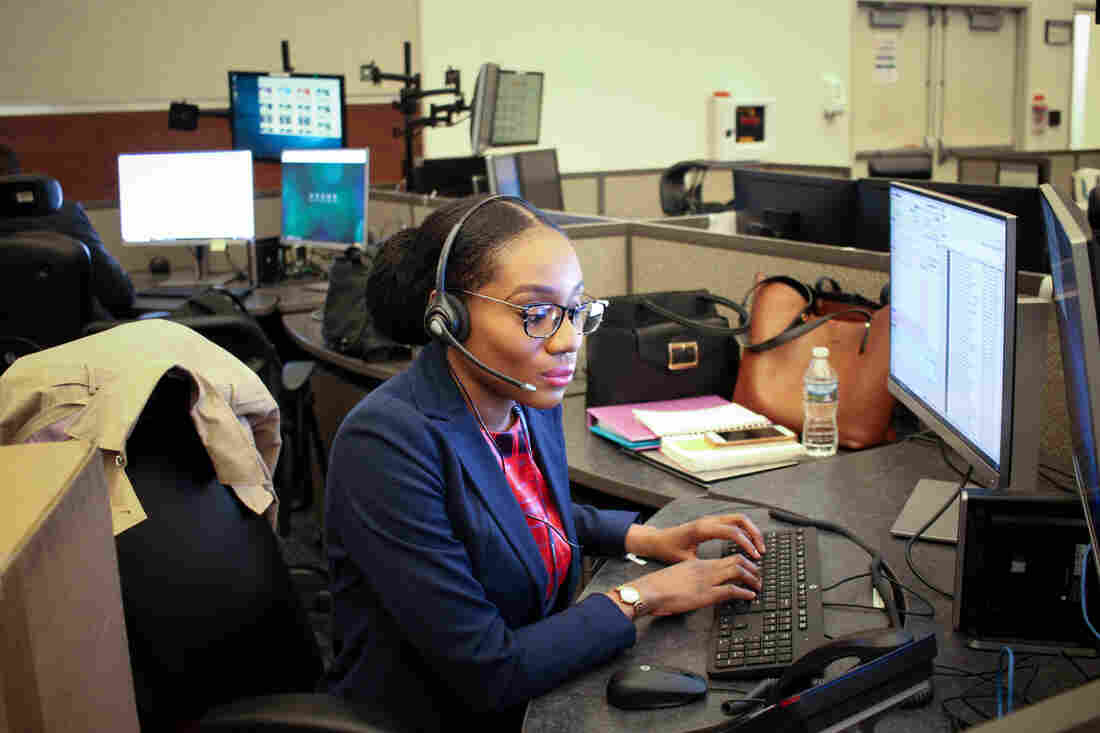 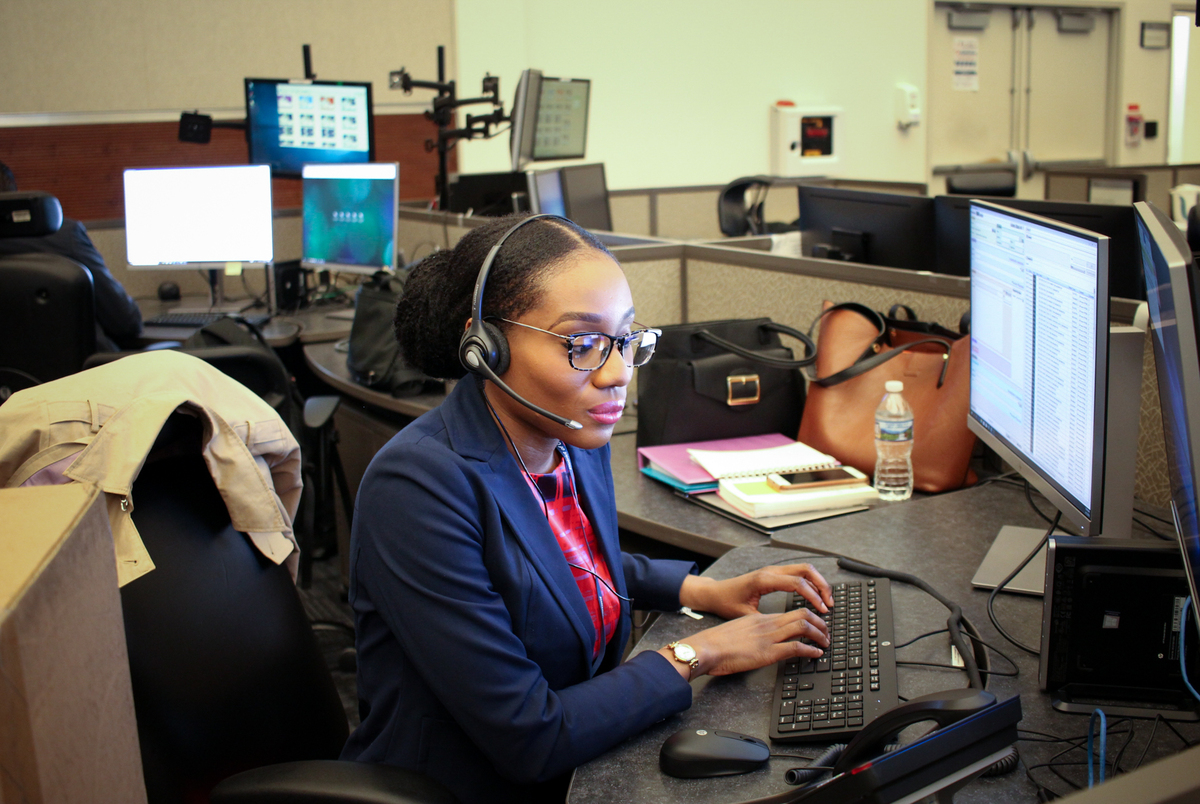 Most people are familiar with some form of triage: When you go to an emergency room, you first sit down with a triage nurse who records your symptoms, takes your vital signs and assesses the urgency of your medical need.

As of Thursday, that's happening over the phone for 911 callers in Washington, D.C., where triage nurses now sit alongside 911 dispatchers to help field calls.

Why are they there? D.C. has the highest rate of 911 calls in the U.S., and 1 in 4 of those calls is not an actual emergency — instead, it's a twisted ankle, or a cough or a rash. The new triage program aims to improve those numbers by diverting needs that aren't urgent to medical care that doesn't involve an ambulance or an emergency room.

During a practice session, trainee Ogechi Ukachu, a registered nurse who has previously worked in an ER, clicks through a series of questions.

"Are you having any difficulty breathing or catching your breath?" she asks the training exercise's pretend caller, who has complained of a sore throat. "Do you hear any weird sounds when you're breathing — like whistling?" No, and no, the caller tells her.

It's not an emergency, Ukachu determines, so instead of having the dispatcher send an ambulance, Ukachu gets to work finding the caller an appointment with a primary care provider who can see the patient that day.

On her computer, based on the information the caller has provided, Ukachu can see whether the patient already has a relationship with a doctor or clinic, or, if not, which community health clinic is closest. She can also see nearby clinics' schedules for the day, so can make the patient an appointment.

The triage nurses can even coordinate free Lyft rides for people who are on Medicaid — including a stop at a pharmacy if needed. 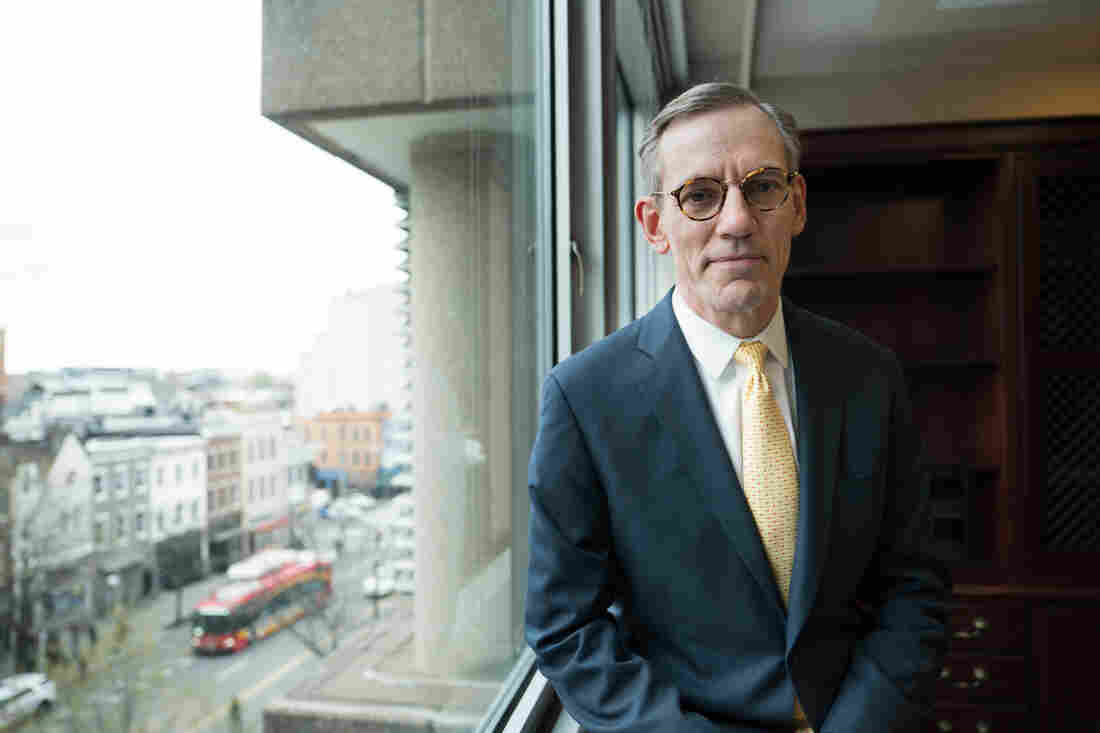 Dr. Robert Holman, medical director of the D.C. Fire and EMS Department, got the idea for the program two years ago, when he realized the city's system was getting backlogged with nonemergency calls. Claire Harbage/NPR hide caption 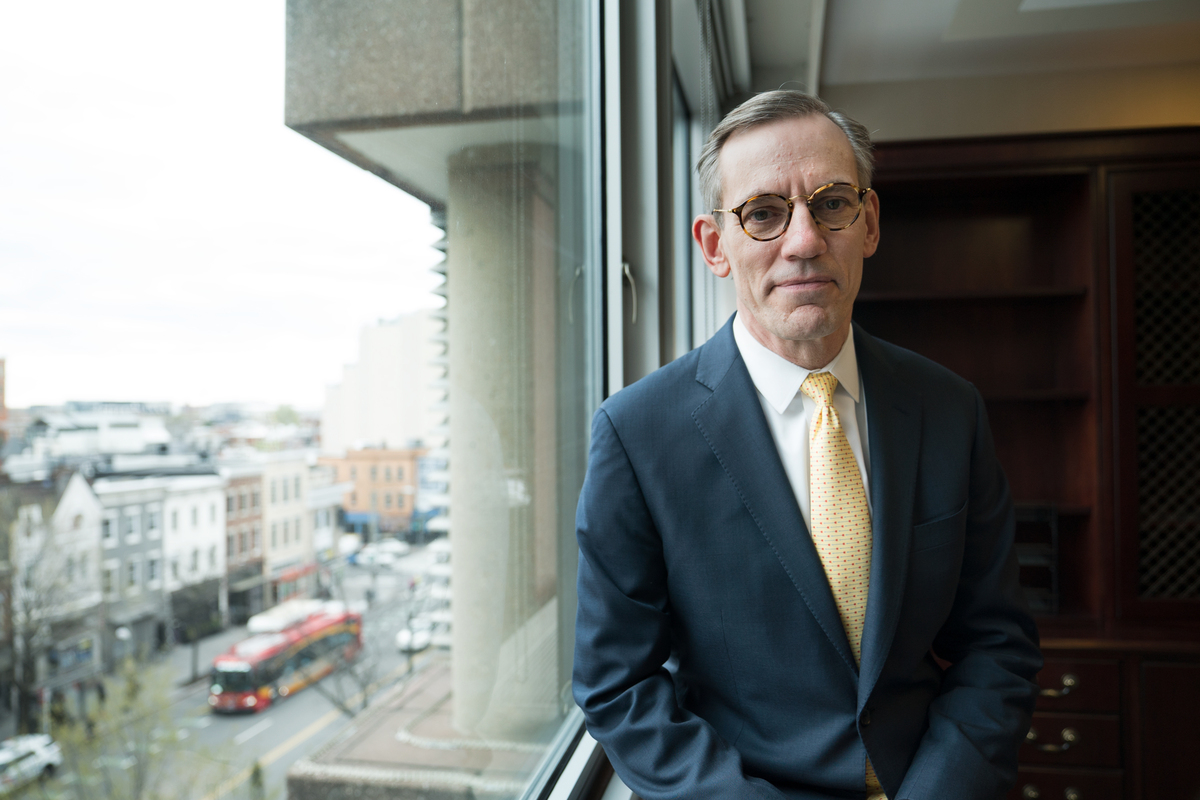 Dr. Robert Holman, medical director of the D.C. Fire and EMS Department, got the idea for the program two years ago, when he realized the city's system was getting backlogged with nonemergency calls.

The "ride" part of the new triage service is critical, proponents say, because that's the real emergency for many of the inappropriate calls to 911. Some callers simply have a hard time getting to the doctor in parts of the District where clinics can be miles away, and public transportation may not be readily accessible.

It has taken two years to pull off this plan. City health agencies, 22 primary care clinics, contractors and unions were all involved, under the coordination of the D.C. Fire and EMS Department.

"We're very excited," says Dr. Robert Holman, the department's medical director, "and of course we all have butterflies in our stomach."

Holman says he hit upon the idea soon after taking his job two years ago. He was looking at the city's emergency call data and noticed that more than a hundred calls every day were for basic medical issues.

"I simply asked a question," he says. " 'Wouldn't this be simply better evaluated using a triage nurse?' "

Other cities across the U.S., such as Louisville, Reno and the Dallas-Fort Worth area, have tried similar initiatives, Holman says. But D.C.'s program is distinct in its broad reach, and in the way it's embedded within the 911 dispatch system.

The hope is that the triage line will save the city and insurers money — ambulances and ERs are the most expensive way to deliver care. Wait times for ambulances should go down, as should ER overcrowding.

And the patients will benefit, too, Holman believes. One example might be someone like a patient he encountered in his previous job at a walk-in health clinic; she'd come to the clinic looking for antibiotics for an infection.

"She mentioned that she'd had a bladder infection quite recently that was treated easily in an emergency department nearby," he recalls.

Instead of just giving her the antibiotics, Holman also checked the patient's vital signs and talked to her. Her blood glucose levels were really high. She was depressed and had stopped taking her diabetes medication, she told him.

"We could actually offer her treatment for her behavioral health problem as well as treatment of her diabetes," he says, "in addition to [treating] her bladder infection."

This is part of Holman's message to city residents: Helping callers get a primary care visit, if they need one, is a service the triage nurse can provide.

"The mapping of our low-acuity callers exactly maps to where our community health centers are in Washington," he says.

However, D.C. has a somewhat rocky history when it comes to its emergency services. In a few high-profile cases in the past, patients have died while waiting for emergency care. Some 911 callers who are advised their case isn't an emergency may feel they're being denied something crucial.

To address these fears in advance, Holman and his colleagues have crisscrossed the District, going to community meetings and neighborhood associations talking to residents.

Lois Wiley, a longtime resident of the LeDroit Park neighborhood, is skeptical of the triage plan and lets Holman know that at a public meeting.

Holman tells her the city's response will be based on the severity of the problem. "If you call with a sore throat," he says, "we are not taking you to the emergency department."

"Oh, yes you are," Wiley says under her breath.

In the face of that sort of skepticism, Washington officials are prepared to carefully monitor how well the pilot project is working.

According to the city's plan, every caller who gets sent to a clinic instead of the ER will be surveyed the next day about their experience. And data analysts will be checking ambulance response time, ER use, primary care use and 911 call volume.

Other cities grappling with the same difficult issues will be closely watching, too.