Accessibility links
You Might Be Breathing Thirdhand Smoke : Shots - Health News Researchers have found that residue stuck on smokers' clothes, furniture or other surfaces can become airborne and pollute indoor air. 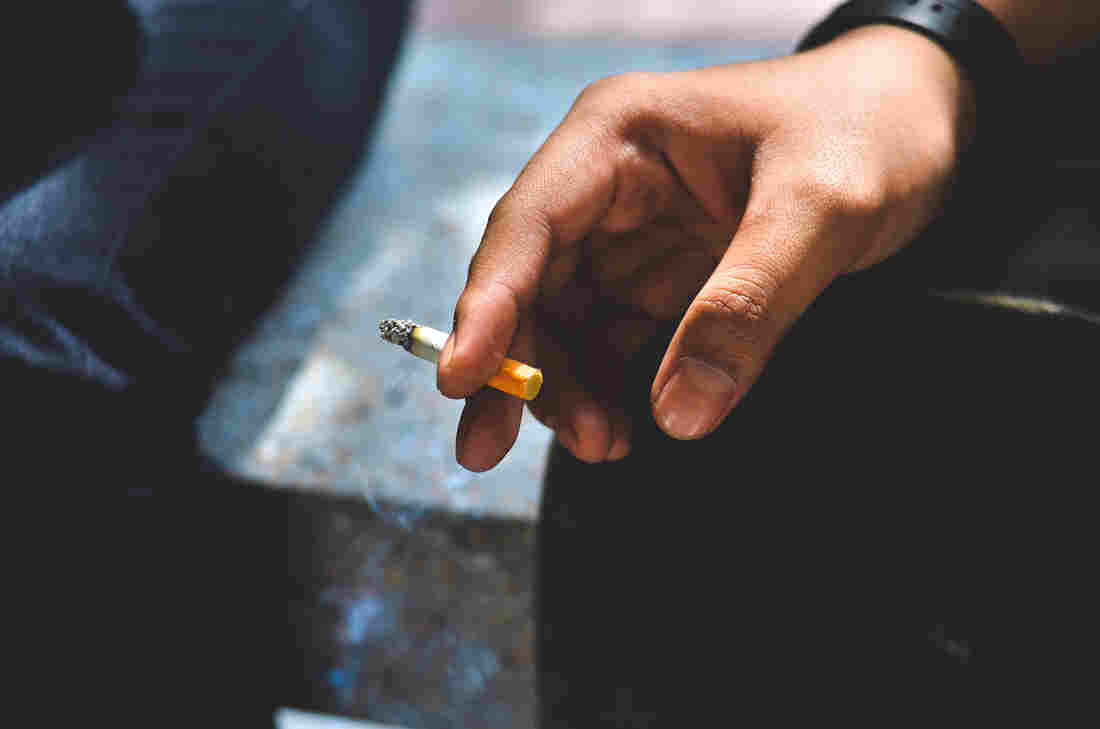 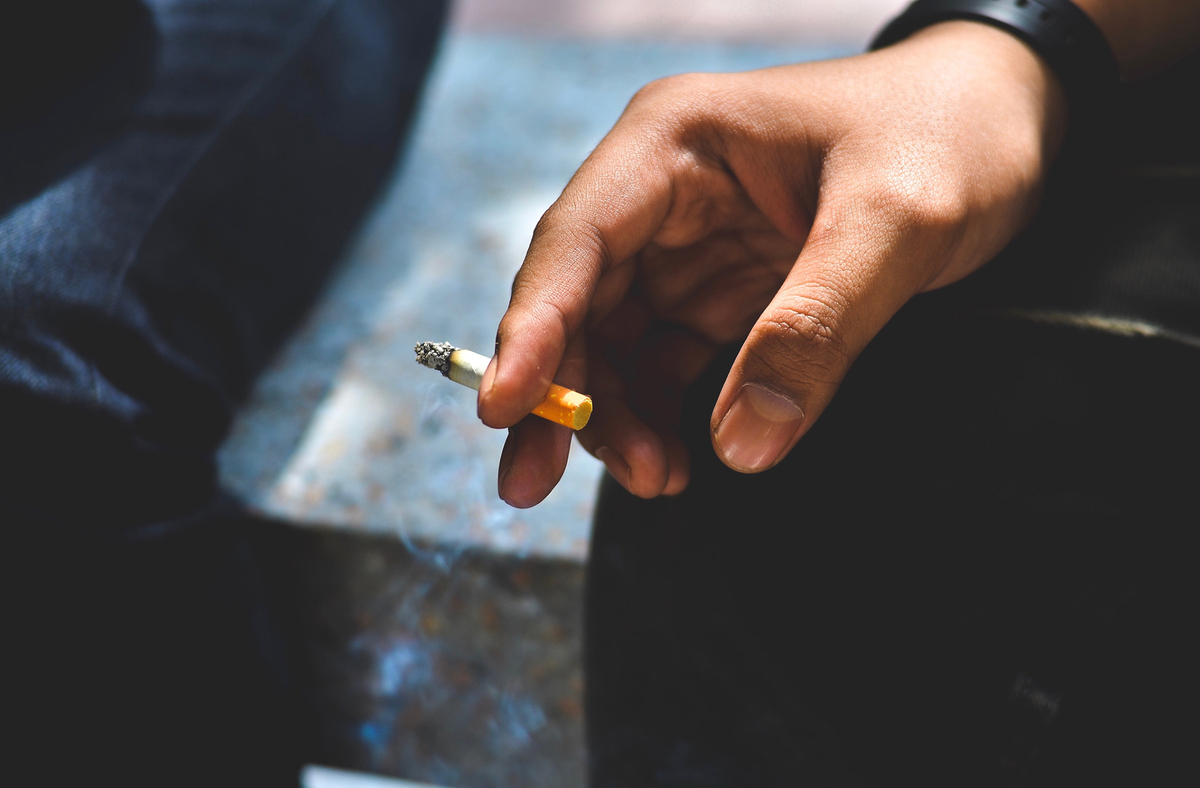 Residue from tobacco smoke can end up in indoor air even in nonsmoking spaces.

You might be breathing chemical residue from tobacco smoke in indoor spaces where no one has smoked for years. This was the surprise finding of a new study published Wednesday in the journal Science Advances.

Researchers at Drexel University in Philadelphia found that chemicals left on clothing, furniture and other surfaces by tobacco smoke – known as thirdhand smoke — can become airborne and travel through a building's ventilation system.

The researchers measured the air composition in a non-smoking, unoccupied classroom over the course of a month using an aerosol mass spectrometer. They initially wanted to see what happens to outdoor air particles when they come inside. But they kept noticing a chemical signature that was only indoors and not outdoors. They discovered it consisted of chemicals from thirdhand smoke — and made up 29 percent of the air mass in the room.

"To add that much additional mass through one type of process is pretty large," says Peter DeCarlo, associate professor of environmental engineering and chemistry at Drexel and lead author on the study. "We didn't expect this at all."

DeCarlo and his team looked into the mechanism that would allow compounds from tobacco smoke to end up in a room that hadn't allowed smoking in at least 20 to 25 years. What they discovered was that thirdhand smoke compounds were effectively hitching a ride on tiny particles in the air.

The classroom they studied happened to be 20 meters down the hall from a balcony where people would sneak out for an unauthorized smoke. The room was also located near an office space where several smokers worked; that space shares the same HVAC system as the classroom in question.

Though they could not identify the exact source, the researchers suspect the thirdhand smoke from these smokers made its way into the classroom and stuck to surfaces there. The compounds were then exposed to another chemical — possibly ammonia from people's breath or skin, or even cleaning products — and became gaseous again.

"The chemistry of this is very interesting," says Neal Benowitz, professor of medicine at the University of California, San Francisco and a leader of the California Consortium on Thirdhand Smoke. He says scientists have known for some time that the nicotine levels in walls and furniture can persist for years. "What this study shows is that thirdhand smoke moves around the room," he says.

The Drexel researchers suggest that after becoming gaseous again, smoke residue compounds can attach themselves to tiny air particles that come inside through a building's HVAC system, which in summer months pulls in outside air and chills it. That cooling process condenses water vapor in the air, which primes those outside particles — which can come from everything from car exhaust to power plant emissions — to react with thirdhand smoke gasses. Once the chemicals attach themselves to the air particles, the building's air distribution carries those chemicals throughout the building, including to the classroom researchers studied.

All this means people could be unwittingly exposed to thirdhand smoke in higher volumes than previously thought — even in locations where smoking has been verboten for years.

The Drexel researchers took their measurements in August 2014, at a time when the building's air conditioning unit was in heavy use. They confirmed the findings in the lab, and repeated the experiment in August 2016 with the same results. However, when they repeated the experiment in winter months, they found no thirdhand smoke compounds in the room, showing that the cooling of outside air was key for their uptake into the air.

There aren't good data on the health effects of thirdhand smoke on humans. Studies have shown liver problems and metabolic issues in mice, but the area of study is relatively new when compared to the more established literature on secondhand smoke, for which the level of exposure to harmful chemicals is much greater than thirdhand smoke.

However, Benowitz added, secondhand smoke exposure is usually limited to the time a smoker is in the room — a matter of minutes.

The findings could lead to further research on thirdhand smoke exposure from e-cigarettes. They don't contain many of the toxic chemicals produced by combustible cigarettes, but do contain nicotine, which can become airborne.

DeCarlo hopes to do future studies on the impact both of vaping and of thirdhand smoke uptake in the home, where the ventilation systems are different than the ones used in commercial and office buildings.

"Certainly I think this [study] needs to be considered when we think about how we are keeping our nonsmoking spaces as smoke-free as possible," he says. "How exactly it's combatted I think is going to be up for debate."

Benowitz is currently looking for biomarkers to measure how much thirdhand smoke exposure a person has had. That will help with future studies about the exact impact thirdhand smoke has on humans.

"It's difficult to study due to the overlap between secondhand smoke and thirdhand smoke," he says. But he adds, "It's certainly a concern and explains how people can be exposed to these chemicals even when they aren't regularly around smokers."

Dana Bate is a health and science reporter living in Philadelphia. You can follow her on Twitter: @danabate.