Accessibility links
Trump's Latest Immigration Proposal Alarms Doctors And Legal Immigrants : Shots - Health News A proposed change in immigration policy from the Trump administration could make it harder for immigrants to obtain a green card if family members use Medicaid, WIC or other federal medical benefits.

Under A Trump Proposal, Lawful Immigrants Might Shun Medical Care

Under A Trump Proposal, Lawful Immigrants Might Shun Medical Care 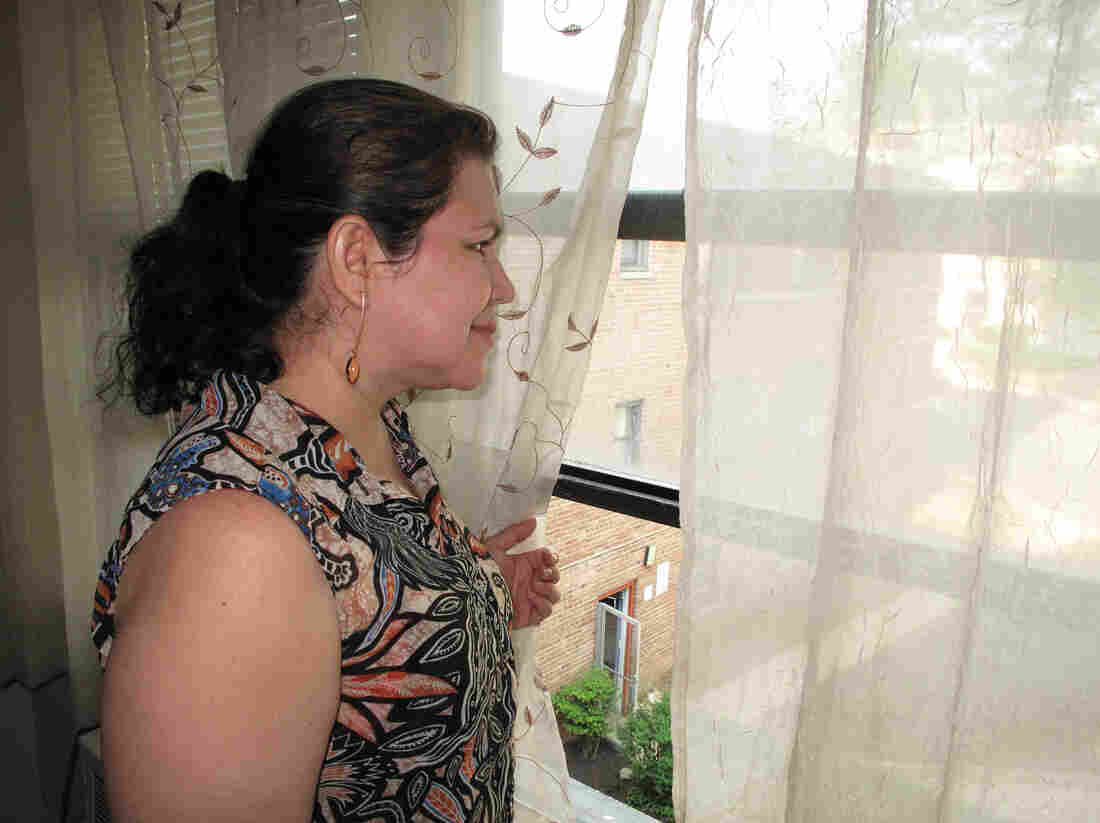 Marnobia Juarez came to the U.S. from Guatemala and lives in Maryland. She dreams of getting her green card, but increasingly worries that won't happen under Trump's policy. Juarez was diagnosed with breast cancer in 2014 and receives care through a state health program. Paula Andalo/Kaiser Health News hide caption 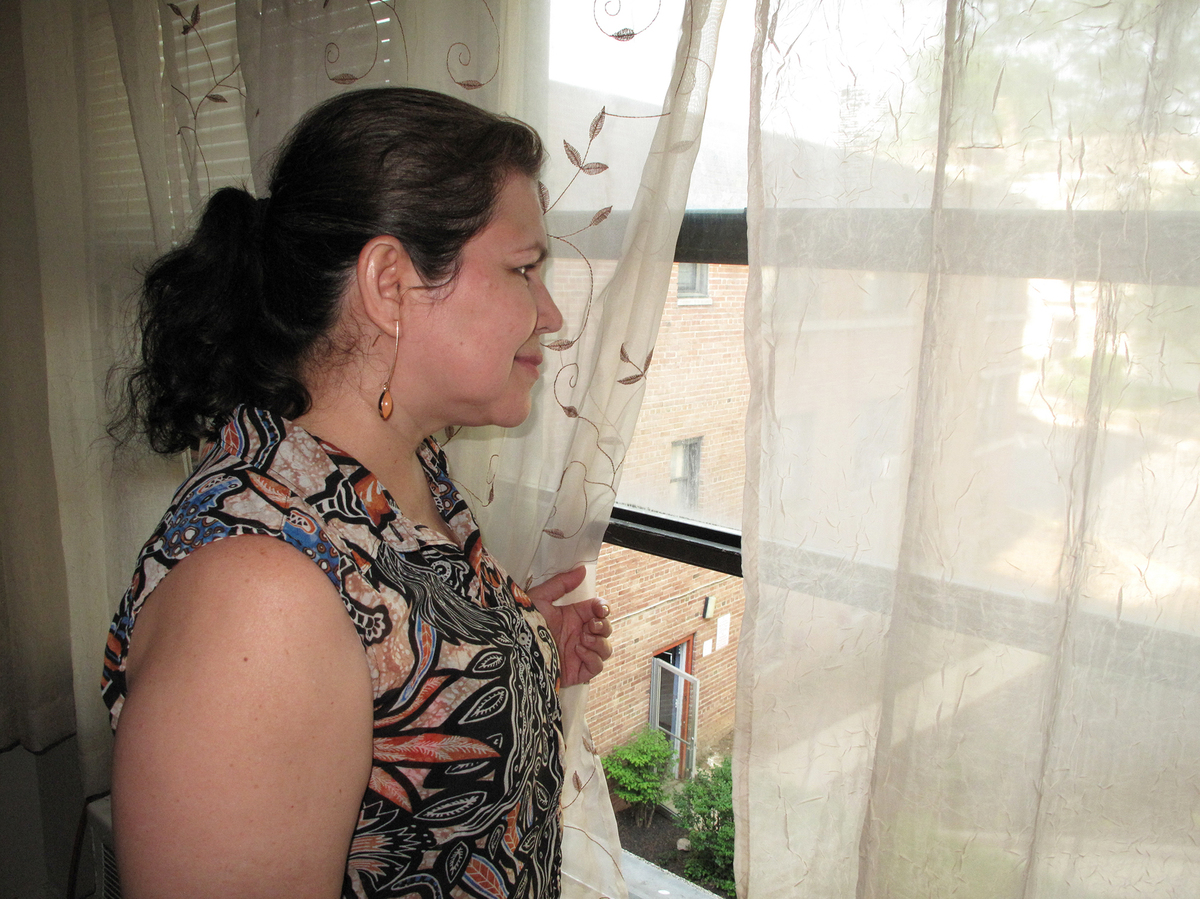 Marnobia Juarez came to the U.S. from Guatemala and lives in Maryland. She dreams of getting her green card, but increasingly worries that won't happen under Trump's policy. Juarez was diagnosed with breast cancer in 2014 and receives care through a state health program.

The Trump administration is considering a policy change that might discourage immigrants who are seeking permanent residency from using government-supported health care, a scenario that is alarming some doctors, hospitals and patient advocates.

Under the proposed plan, a lawful immigrant holding a visa could be passed over for getting permanent residency — getting a green card — if they use Medicaid, a subsidized Obamacare plan, food stamps, tax credits or a list of other non-cash government benefits, according to a draft of the plan published by The Washington Post.

Even letting a child who is a U.S. citizen use such benefits could jeopardize a parent's chances of attaining lawful residency, according to the measure.

Health advocates say such a policy could frighten a far broader group of immigrants into avoiding government-supported health coverage, creating public health problems that could be dire in the long run — for those patients and for U.S. hospitals.

About 3 million people received green cards from 2014 through 2016, government records show. Immigrants in the U.S. on a visa or those who have no legal status but plan to seek citizenship based on a close family relationship would be affected.

"We are very concerned that this rule, if finalized, would have a significant impact on health in this country," says Erin O'Malley, senior director of policy for America's Essential Hospitals, who discussed the plan with Trump administration officials in mid-April.

O'Malley says she fears that some visa holders and their families would steer clear of getting routine treatment and resort to going to emergency rooms for medical care. Such a change would "undermine the stability of our hospitals by creating uncompensated care costs and creating sicker patients," O'Malley says.

If enacted, the rule could force a mother to weigh the need for hospital inpatient care for an ailing newborn against losing her legal immigration status, says Wendy Parmet, director of the Center for Health Policy and Law at Northeastern University.

"The administration, in the draft, talks about self-sufficiency," she says. "But we don't expect that of [babies]" who are U.S. citizens because they were born in this country. "It's extremely hardhearted."

Pushback has already begun against the leaked draft proposal, even though it is in the earliest stages of the rulemaking process.

Washington state's Gov. Jay Inslee, a Democrat, is sending staff in mid-May to meet with the White House Office of Management and Budget, which is vetting the proposed rule. Inslee sent a letter on April 24 urging OMB Director Mick Mulvaney to consider the impact on tax-paying, lawful immigrants.

"This will undoubtedly lead to people across the U.S. going hungry, not accessing needed medical care, losing economic self-sufficiency, and even becoming homeless," Inslee's letter says.

The leaked draft document said immigration officials would count the use of one or more non-cash benefits by the applicant within three years as a "heavily weighed negative factor" in deciding whether to grant permanent residency.

On March 29, the Department of Homeland Security sent a version of the proposal to OMB, which is reviewing it for conflicts with existing law. Next, it will be published as a proposed rule that the public can comment on before it's finalized.

Marilu Cabrera, public affairs officer with the U.S. Citizenship and Immigration Services, declined to comment on whether the draft published by the Post mirrors what the OMB is reviewing.

Students Fill A Gap In Mental Health Care For Immigrants

Fear in immigrant communities already weighs on physicians. Dr. Julie Linton, a spokeswoman for the American Academy of Pediatrics, treats many Latino immigrant families at an outpatient clinic in Winston-Salem, N.C.

One woman from Mexico, who had a newborn baby and three other children, told Linton she was afraid to keep her family enrolled in the nutrition program for Women, Infants, and Children — commonly known as WIC.

"Is it safe to use WIC?" the woman asked Linton.

Linton said questions like that put pediatricians in a tough position. On the one hand, Linton says, evidence shows enrolling in WIC leads to better health outcomes for kids. But what if it also puts the family at risk of being split apart?

"It feels very frightening to have a family in front of me, and have a child with so much potential ... and be uncertain how to advise them" on whether to accept public benefits, Linton says.

Maria Gomez, president of Mary's Center, which runs health clinics in Washington, D.C., and Maryland, said she's seeing three to four people a week who are not applying for WIC and are canceling their appointments to re-enroll in Medicaid.

The proposal homes in on who is considered a "public charge." The concept emerged in immigration law in 1882, when Congress sought to bar immigrants deemed "idiots, lunatics" or otherwise likely to become a burden on the government.

The notion of a "public charge" last surfaced in 1999, when the immigration service clarified the concept. Then and now, an immigrant considered a "public charge" is inadmissible to the U.S. if the person is likely to rely on cash support from the government for income, or lives in a government-funded long-term institution.

Yet the guideline published in 1999 clarified that legal residents were free to access non-cash benefits like Medicaid, food stamps and assistance for heating bills.

"These benefits are often provided to low-income working families to sustain and improve their ability to remain self-sufficient," the guideline says.

The leaked proposal draft would rewrite those rules.

If enacted, Trump's proposal would label anyone who had recent or ongoing use of a non-cash government benefit in the previous 36 months a likely "public charge," and therefore inadmissible to the U.S. The use of such benefits by a spouse, dependent parent or child would also be taken into account.

Applicants who have "expensive health conditions" such as cancer, heart disease or "mental disorders" and who have used a subsidized program would also get a heavily weighted negative mark on their application, the leaked proposal says.

Forty-eight-year-old Marnobia Juarez battled cancer successfully and is hoping her husband's green card application is approved; she also dreams of one day getting her own.

Juarez says she never wanted to apply for public benefits until she was diagnosed with breast cancer in 2014. Since then, she has been treated at no cost under a program run by the state of Maryland.

"I'm alive thanks to this program," says Juarez, who is a community leader at CASA de Maryland, an immigrant advocacy group. "You don't play with life, and they are playing with life."

The proposal says immigrants would have the option of posting a minimum $10,000 bond to help overcome a determination that they are likely to be a "public charge."

The changes would affect people sponsored by a U.S. citizen family member, most employment-based immigrants, diversity visa immigrants and "certain non-immigrants," the leaked proposal says. In 2016, roughly 1.2 million people got their lawful permanent residence status, or a green card in the U.S. Of the total, 566,000 were immediate relatives or spouses of U.S. citizens and 238,000 more were family-sponsored, according to data from the Department of Homeland Security.

The change would not affect some immigrants — such as refugees and people granted political asylum. Nor would it apply to undocumented immigrants.

"We're talking about middle-class and working families," says Madison Hardee, a senior policy analyst and attorney with the Center for Law and Social Policy, which has organized a coalition to fight the proposal.

"This could really put parents in an impossible situation — between seeking health assistance for their children and obtaining a permanent legal status in the U.S.," Hardee says.

The list of benefits includes, among other programs, the Children's Health Insurance Program; non-emergency Medicaid; the Supplemental Nutrition Assistance Program, or food stamps; WIC and short-term institutionalization at government expense. The leaked proposal notes that foreign-born and native-born Americans use such programs at similar rates.

The leaked proposal says it is meant to ensure that people seeking to "change their nonimmigrant status are self-sufficient." It notes "relevant congressional policy statements," including one that says "the availability of public benefits [should] not constitute an incentive for immigration to the United States."

Kaiser Health News, a nonprofit news service, is an editorially independent program of the Kaiser Family Foundation, and not affiliated with Kaiser Permanente. KHN correspondent Emmarie Huetteman also contributed to this report.